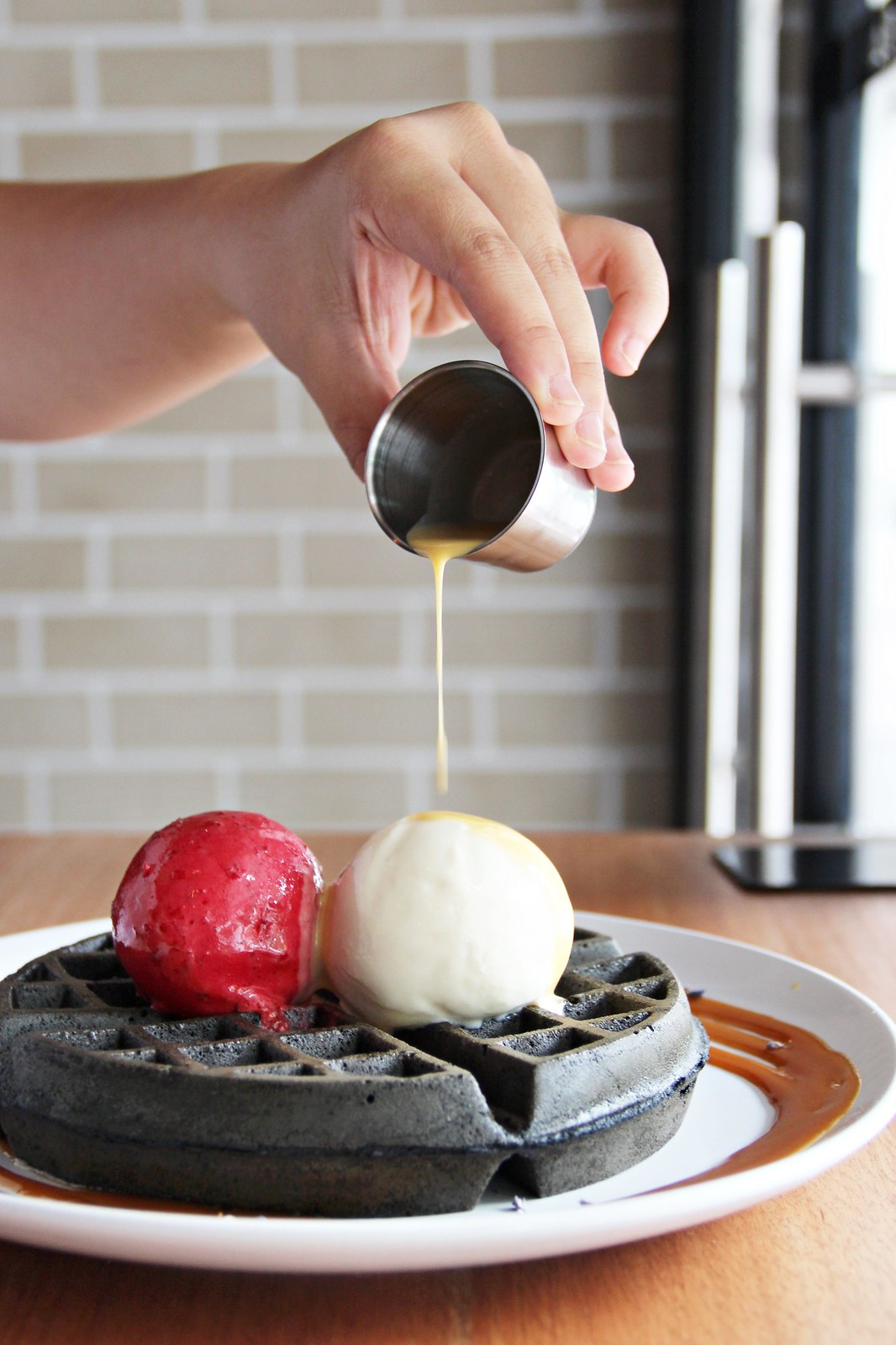 The infiltration of cafes into HDB estates never stops. This time, an ice cream bar serving up exquisite flavors of ice cream, waffles and plated desserts has opened under a block of flats in Bedok. They dedicate themselves to using fresh ingredients and creating their own unique flavors with modern cooking techniques – the concept turned out quite refreshing indeed. 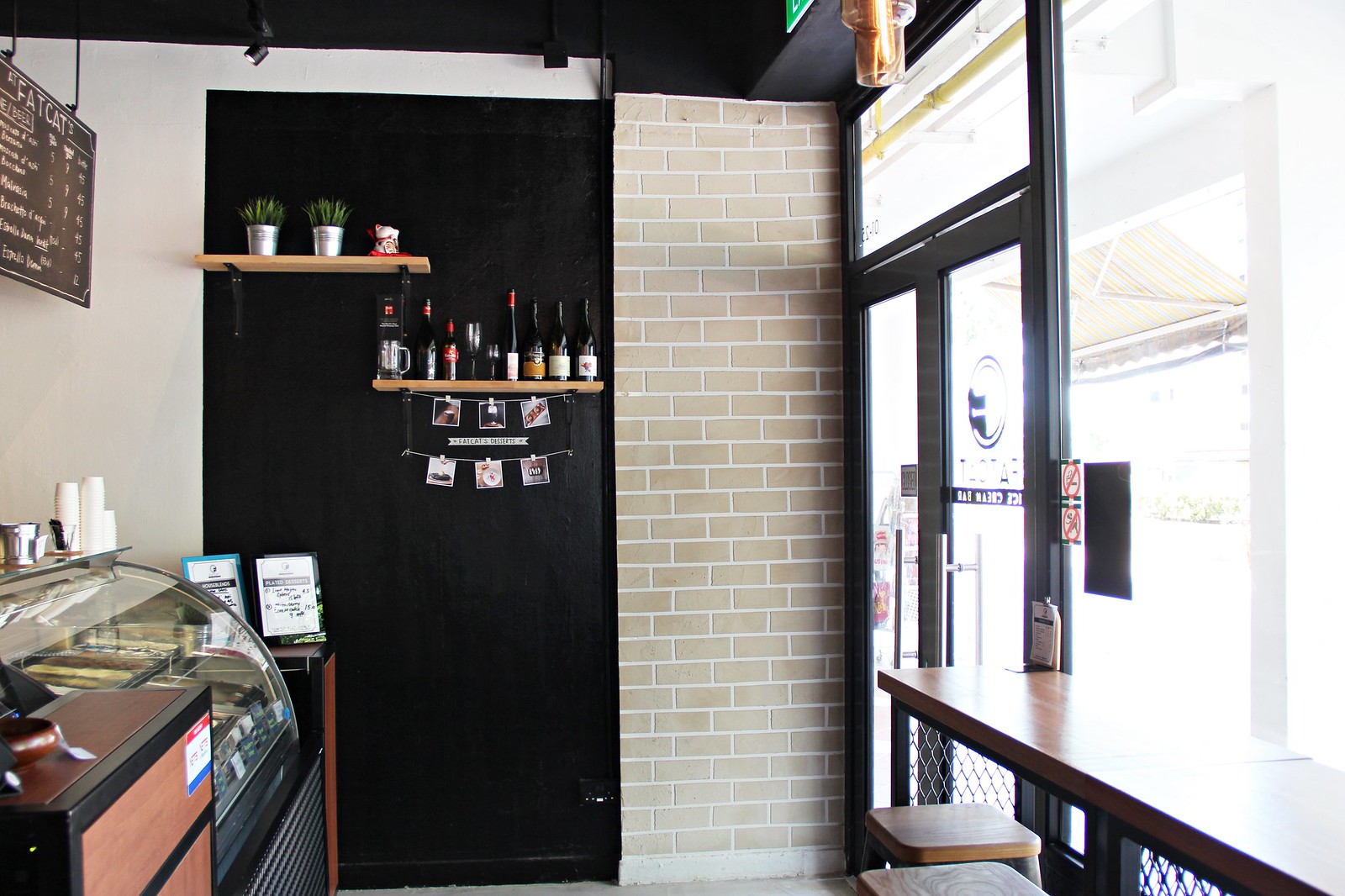 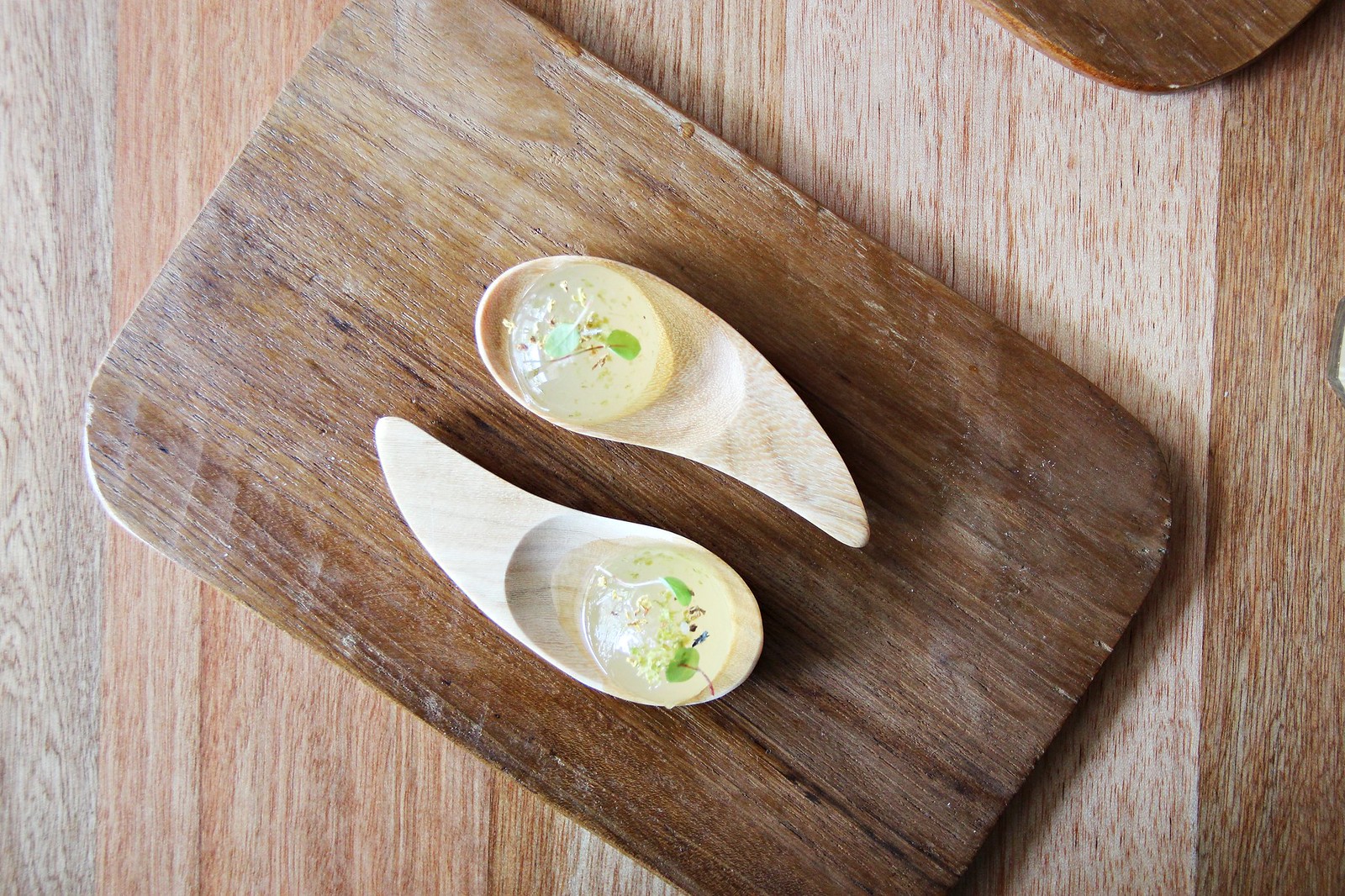 You might gasp at the small serving of the Lime Mojito Sphere ($4.5) as it is only a mouthful but you probably won’t regret it. Put it entirely in your mouth and let the liquid

mojito burst out completely. A moment of silence, please. 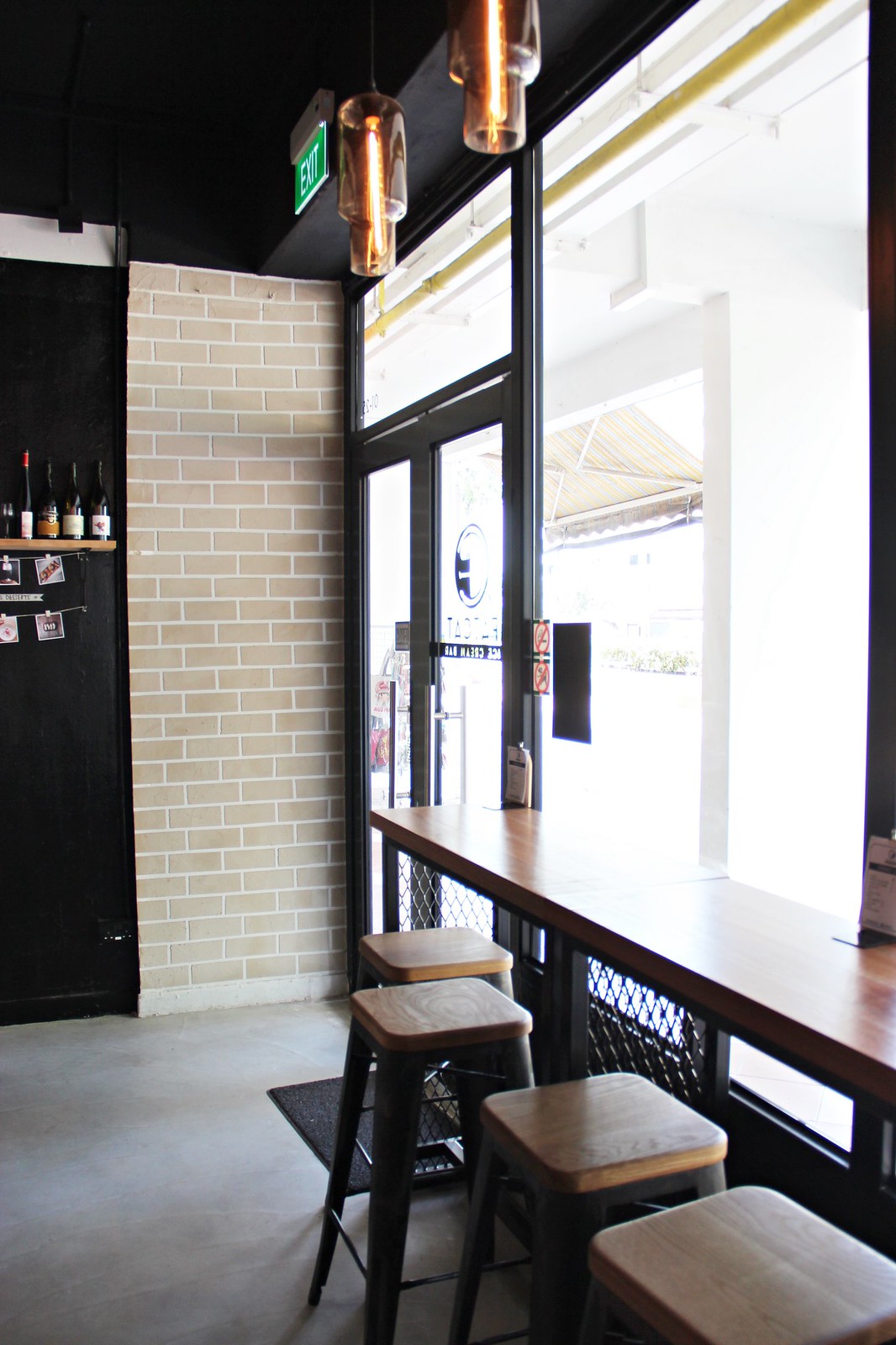 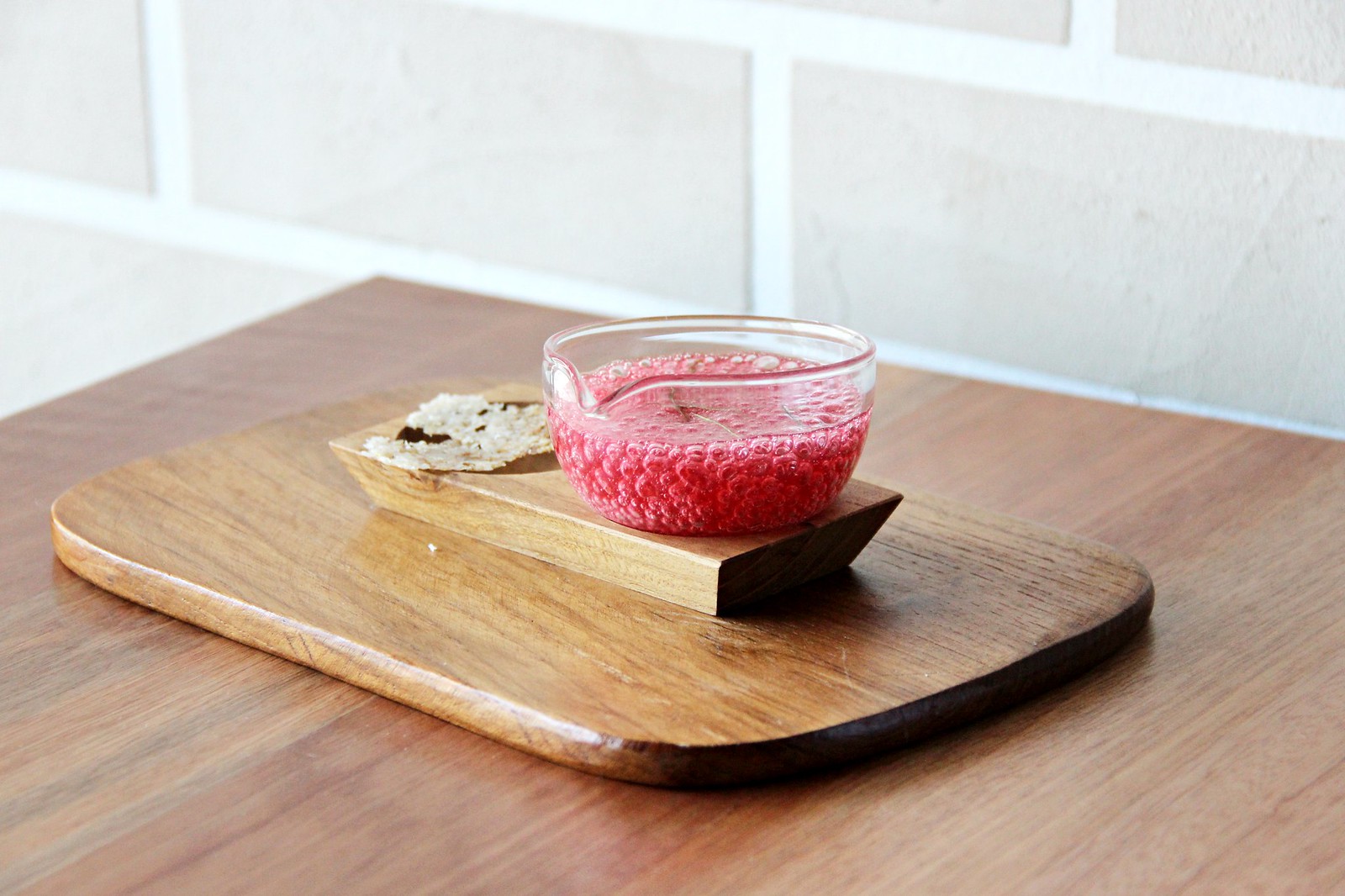 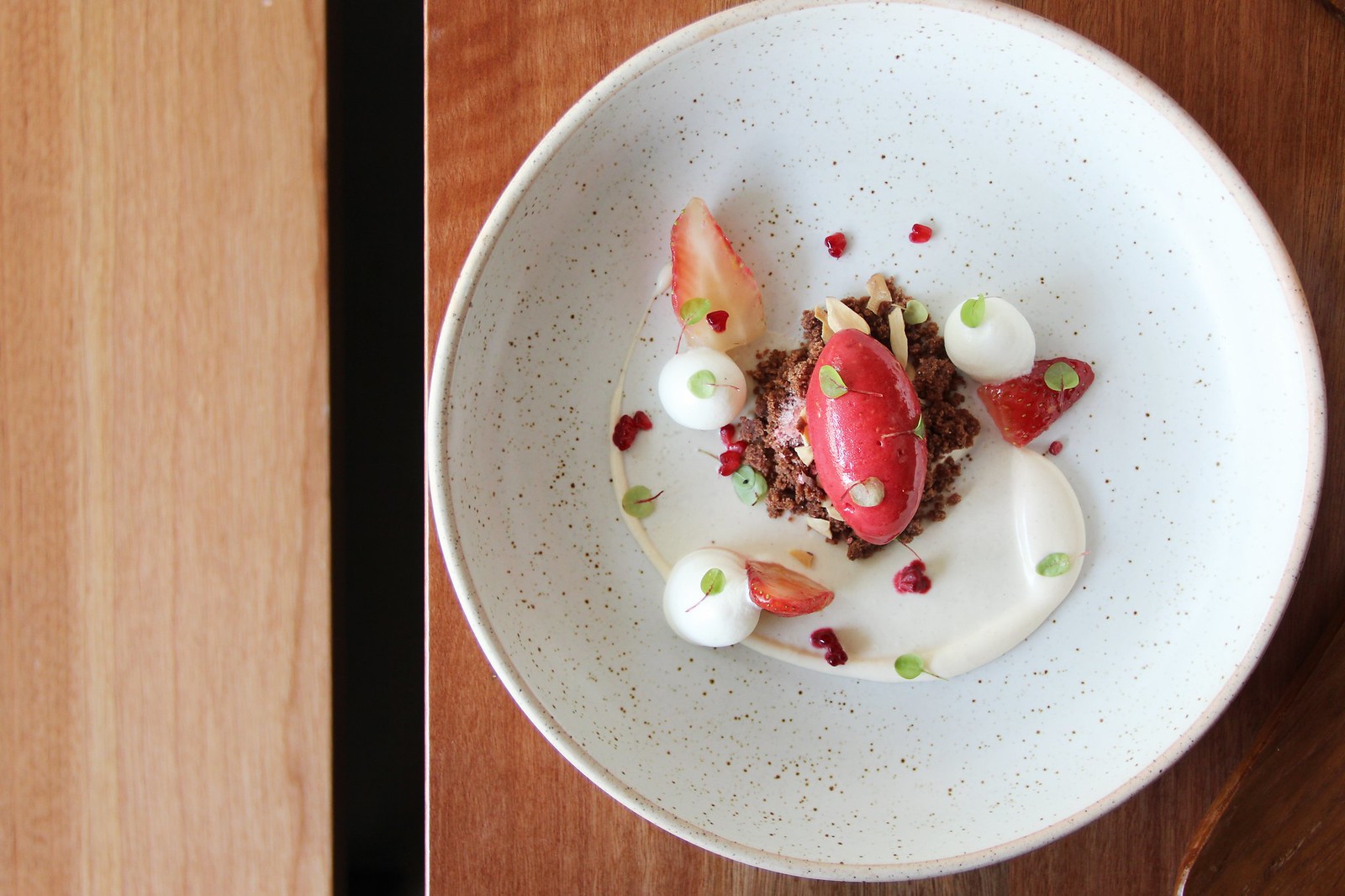 And here I present to you the most beautifully plated dessert here, the Deconstructed Strawberry Cheesecake ($15) – comprising cinnamon shortbread crumble, strawberries, cinnamon cream cheese mousse and a scoop of raspberry sorbet. Every component came in together nicely, in terms of both visual appeal and taste. We were literally trying to scrape every inch of the plate for more. There’s also a pre-dessert for this –  carbonated strawberries and amuse-gueule. 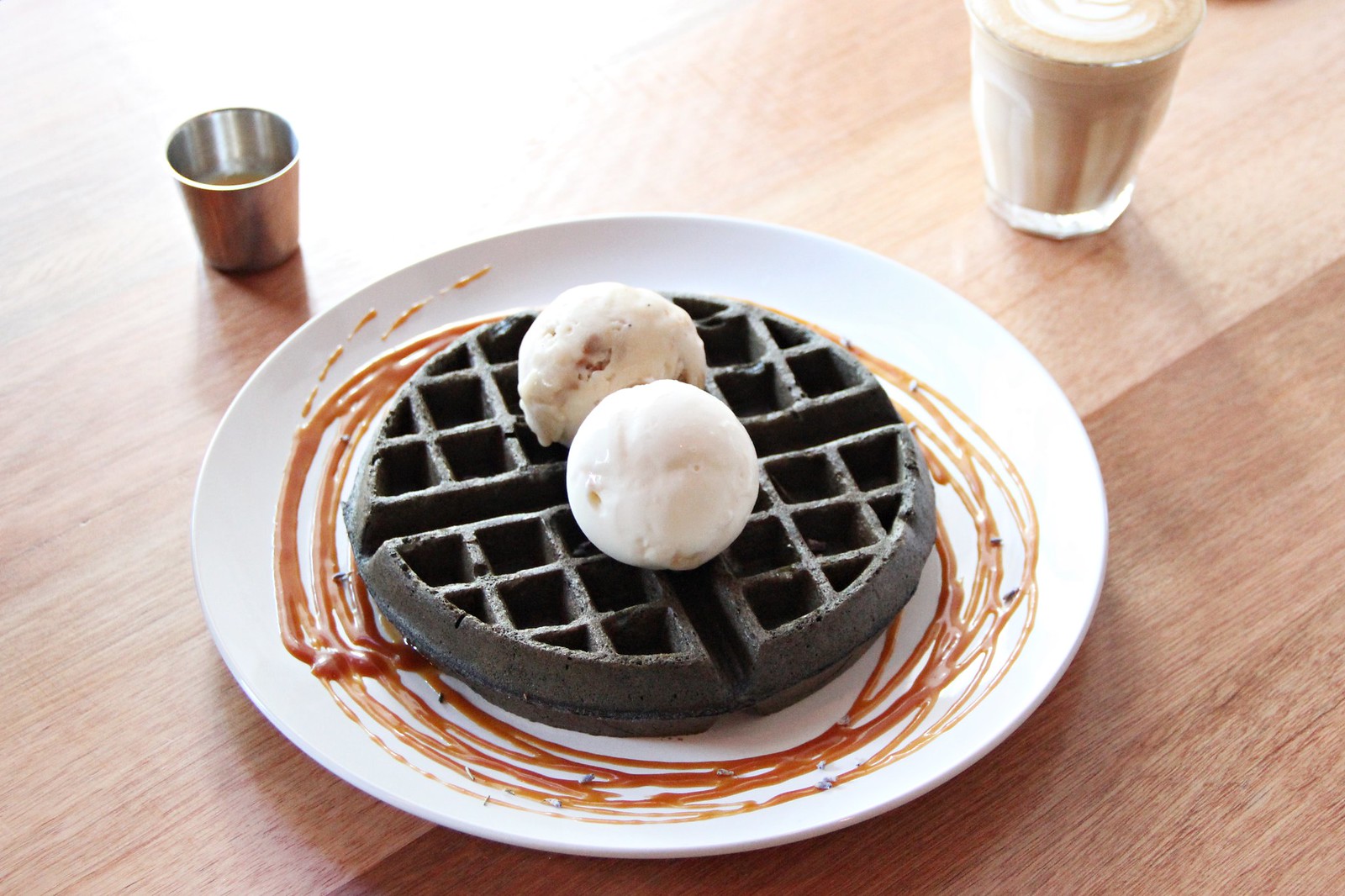 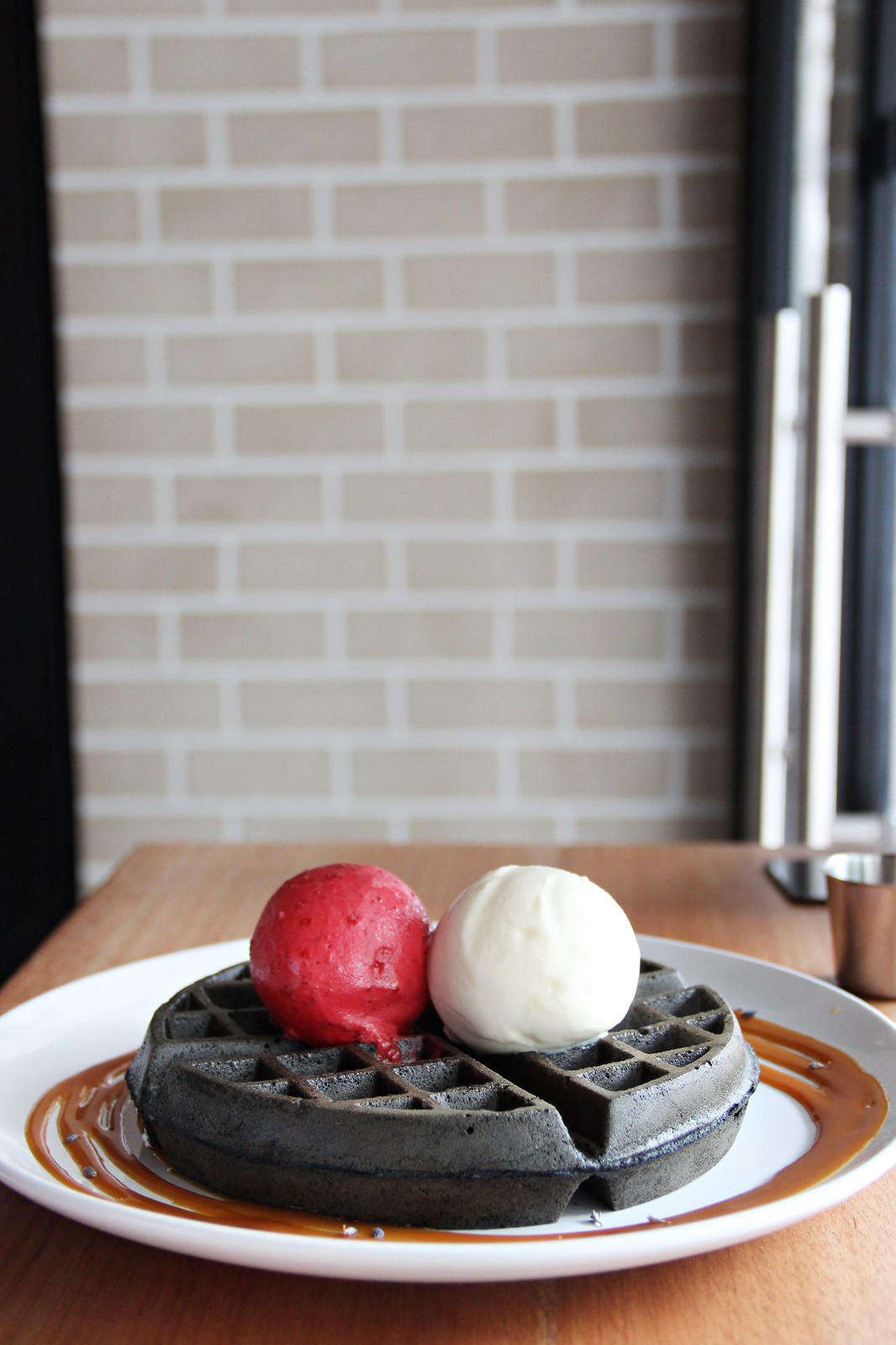 Of course, any dessert cafe now can’t do without the staple of cafe goers- the waffle.

Their Gourmet Waffles ($6), aka charcoal waffles, are slowly becoming the talk of the town. Not just because they are black and different from the usual buttermilk waffles, but also because they come with salted egg yolk custard sauce for you to drizzle on the waffles.  The first bite taken of the waffles together with the egg yolk sauce may seem strange since it’s savory but as you continue on it becomes oddly addictive. I have been very compelled to request for more sauce each time. They also come with salted caramel sauce drizzled round the dish, and the bits of lavender in the caramel sauce gives it a refreshing edge. The original buttermilk waffles drizzled with chocolate sauce are also served here, but those are just so passé.

I had two scoops of ice cream on top of the waffles – Banana Hazelnut Sorbet ($3.9) and Butterscotch ($3.9). The former contained traces of mashed bananas (which explains the heavy taste) which kind of overpowered the hazelnut but I’m not complaining. The texture of the sorbet was surprisingly smooth to my liking. The latter, on the other hand, was mildly sweet.

On another occasion, I had Cherry Brandy Sorbet ($4.5) and Butter Beer ice cream ($4.5) to go along with my waffles. The cherry brandy was refreshing while the butter beer was sweet with a bitter beer aftertaste. Something interesting to note – they make all their ice cream from scratch. 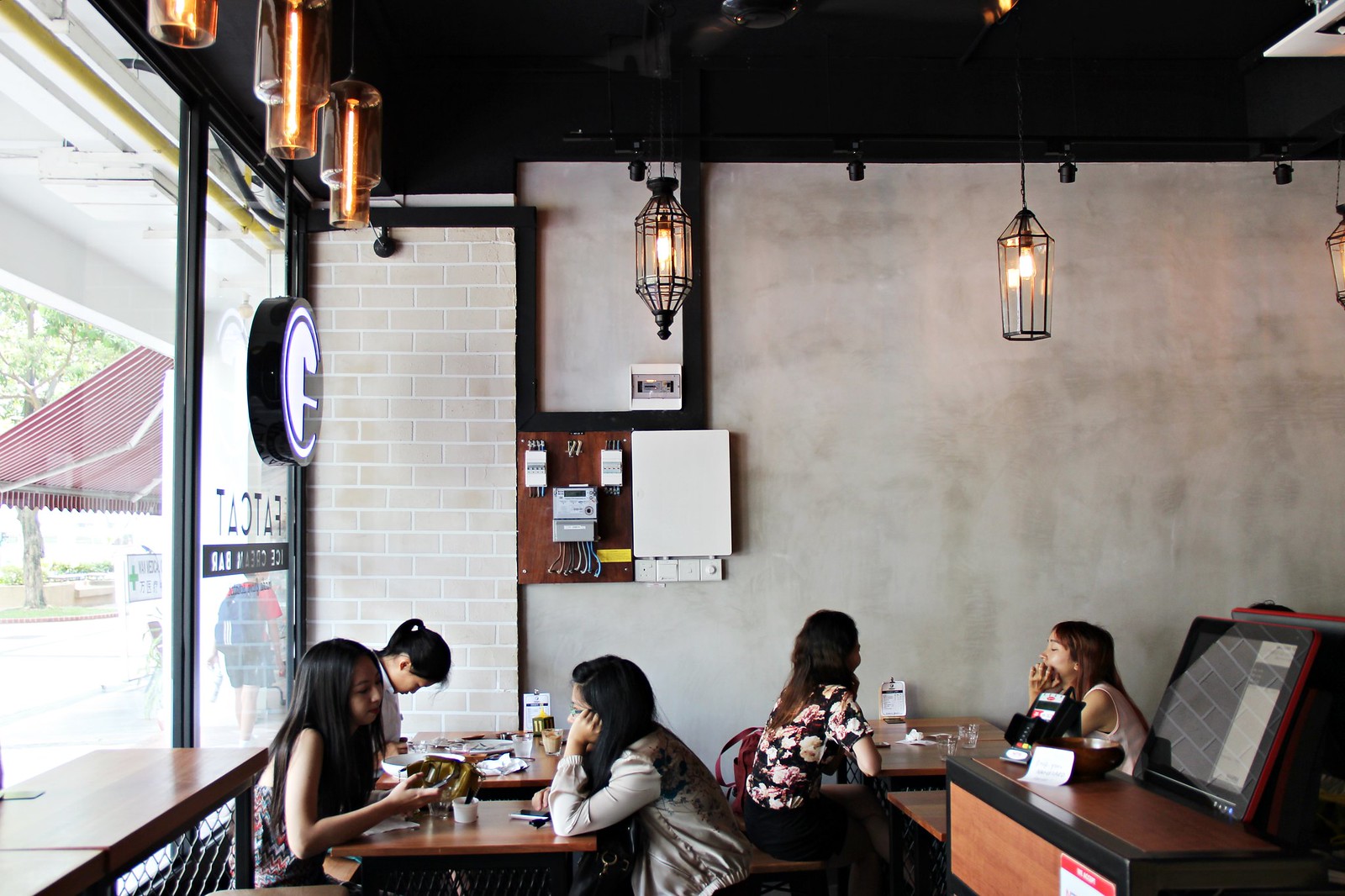 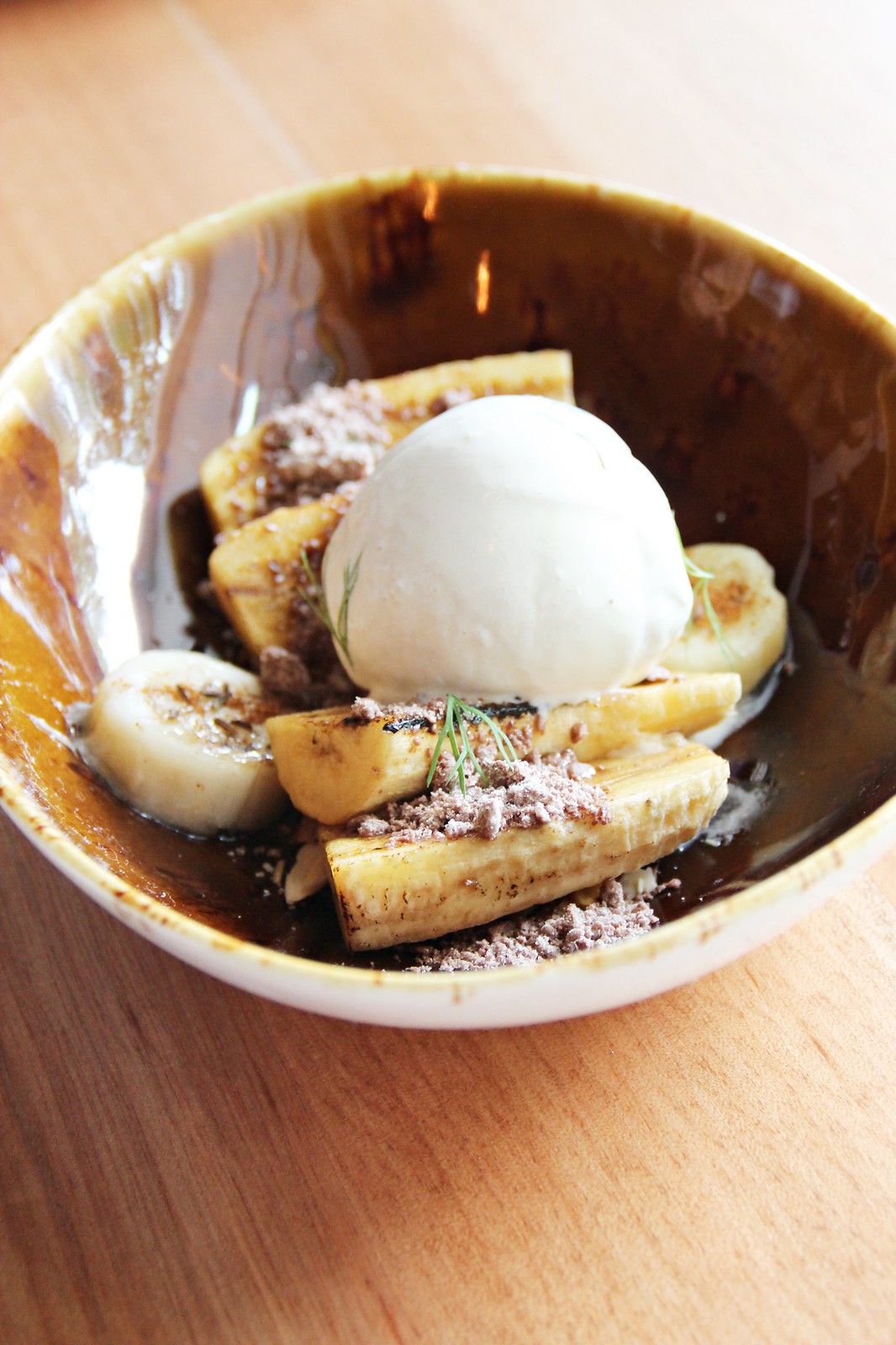 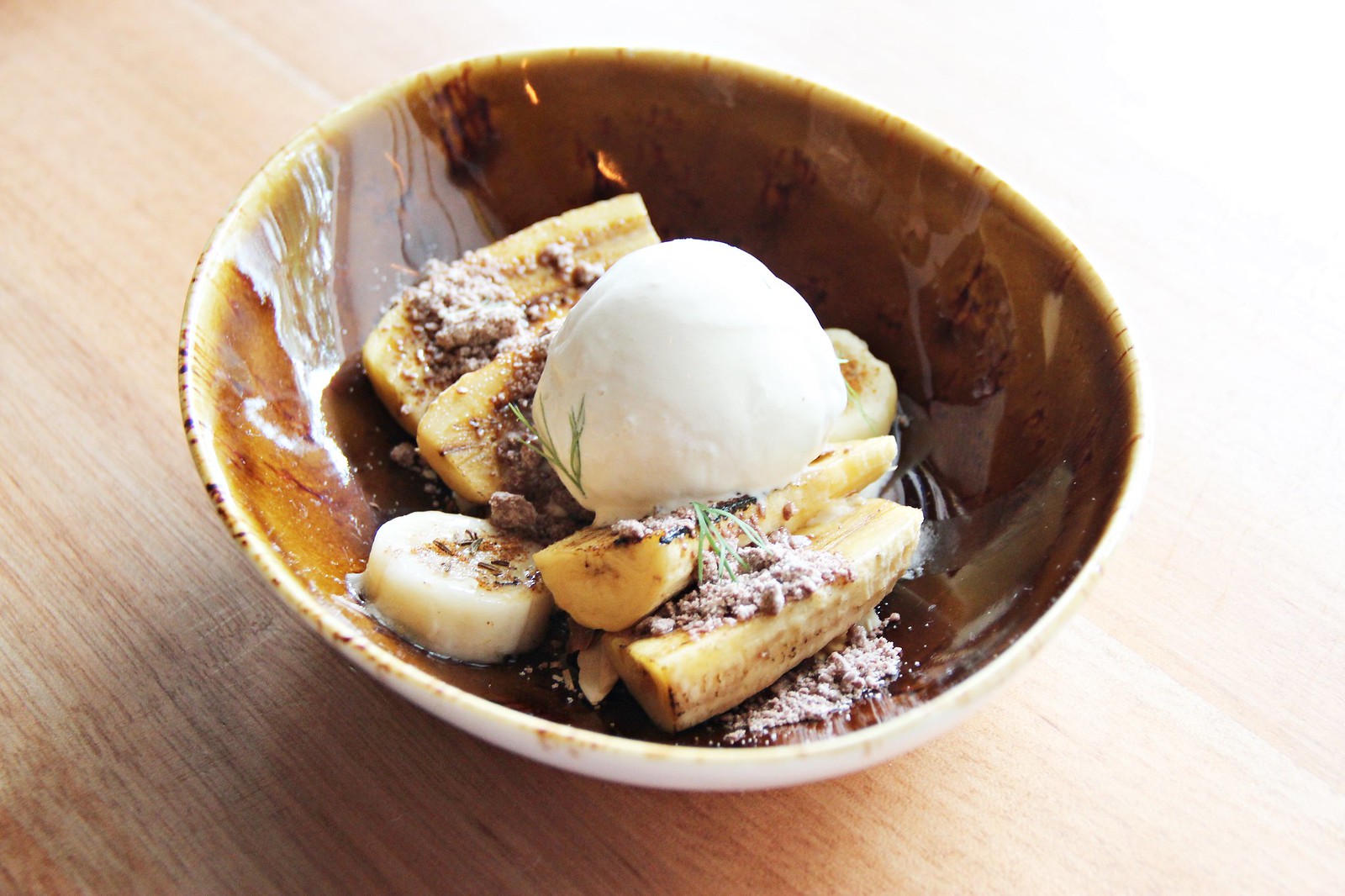 My least favorite was the Banana Nutella ($9) which came with Hay & Honey ice cream and Nutella soil on caramelized bananas. Could be better if the bananas were more caramelized and the nutella soil didn’t make the dish seem dry.

As for their drinks here, the coffee is pretty decent and I’ve yet to order their signature hot chocolate but I heard it’s worth the try. I really like that they have my favorite Moscato as well since you can hardly find any cafes offering them. 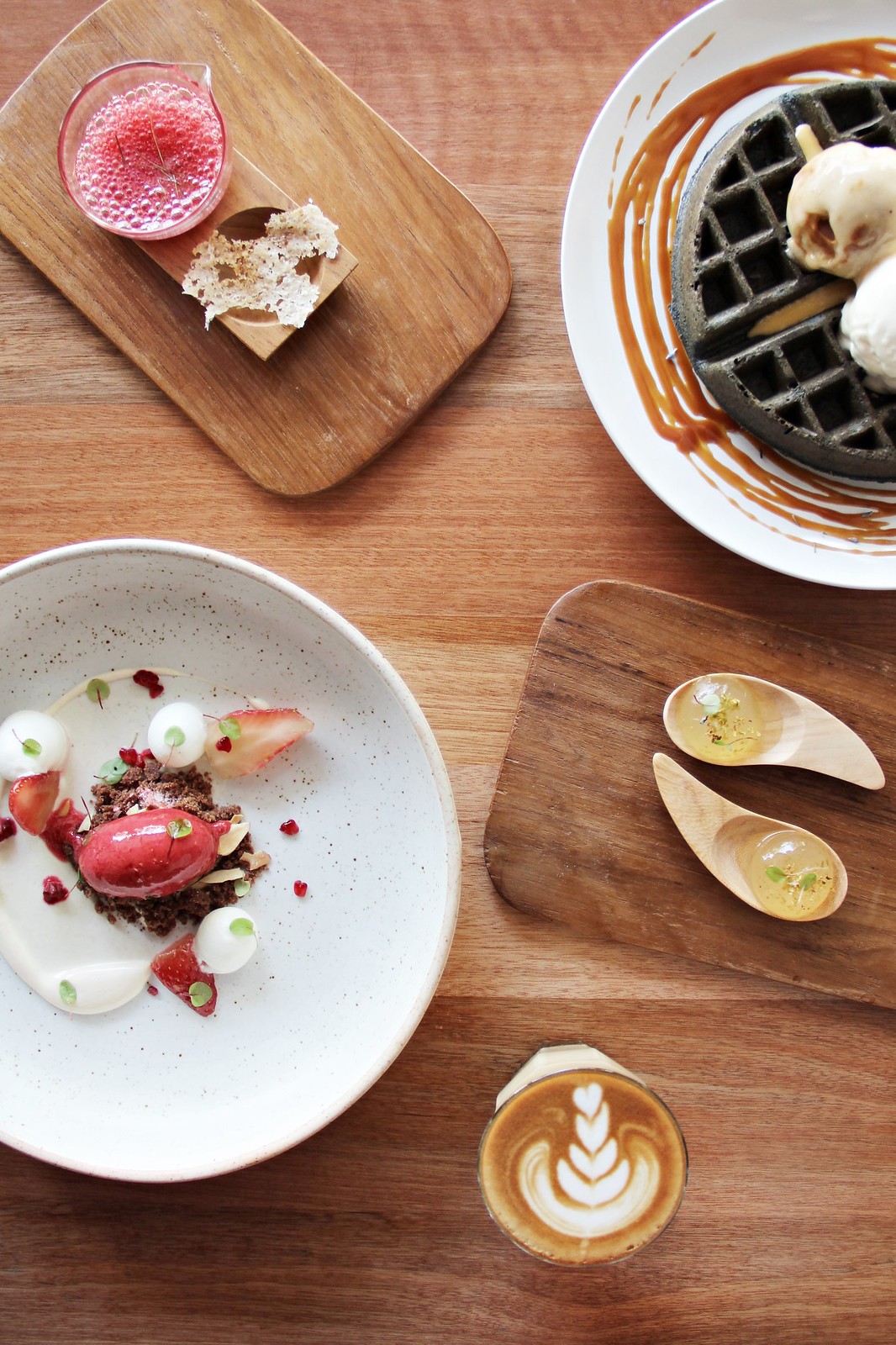 If you’re planning on visiting (and you should), I suggest you to head down quick. There was only a one week gap between my first and second visit yet the number of patrons have gone up by a fair bit. Another piece of advice – go early. There are limited quantities of the desserts and generally their plated desserts (excluding waffles) are only limited to 20 servings a day! The plated desserts are also rotated on a daily basis so it’s not a guarantee that all that you want to try is there. Hipster enough, eh?