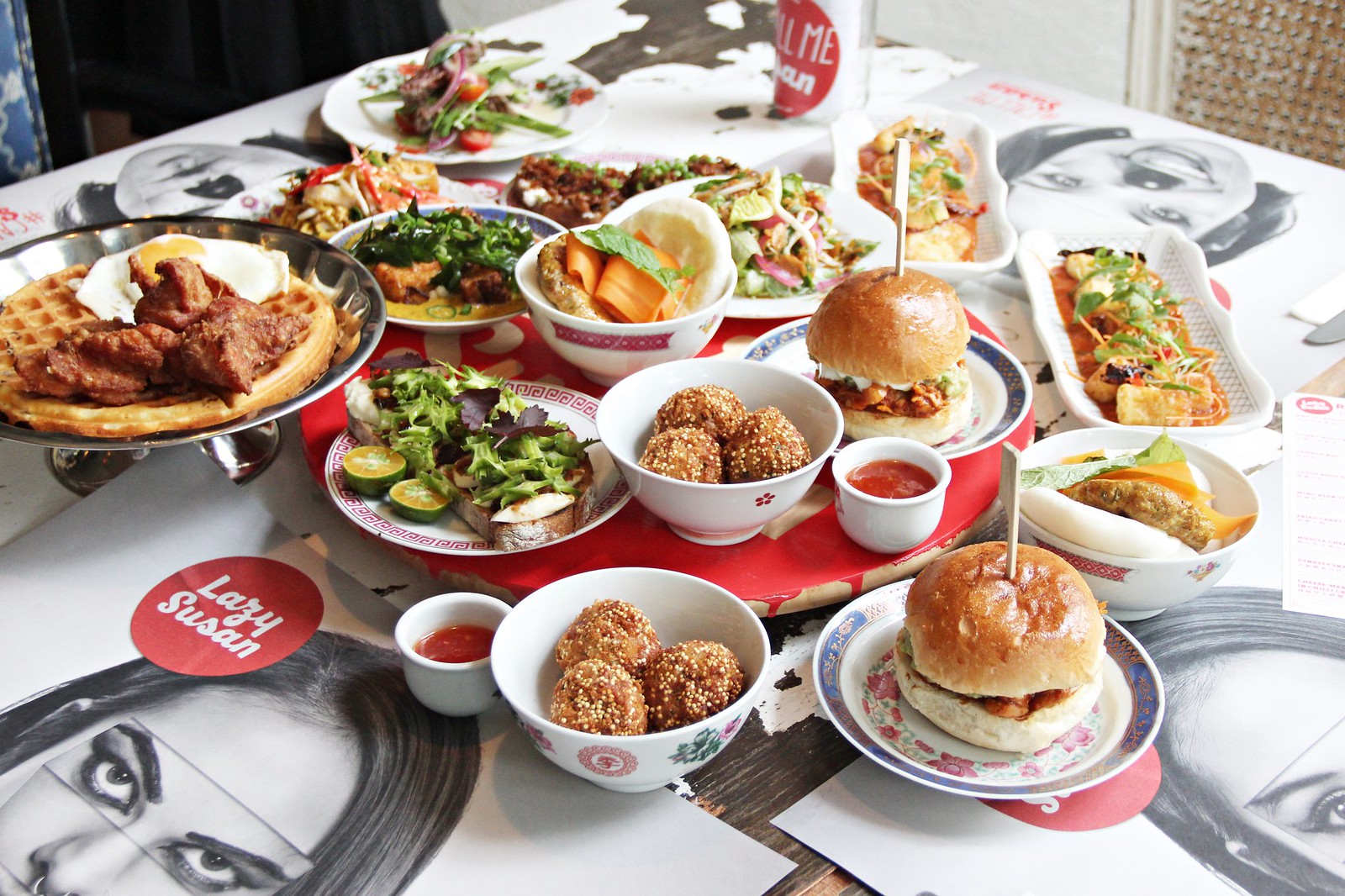 Don’t be surprised if you walk into House and the place looks a little different to you than before. The new pieces of decor are centred on red and give the western-based House an Asian touch. Take note that currently the House menu is only available on Monday to Wednesday and the restaurant will only serve food from the Lazy Susan menu for the rest of the week. 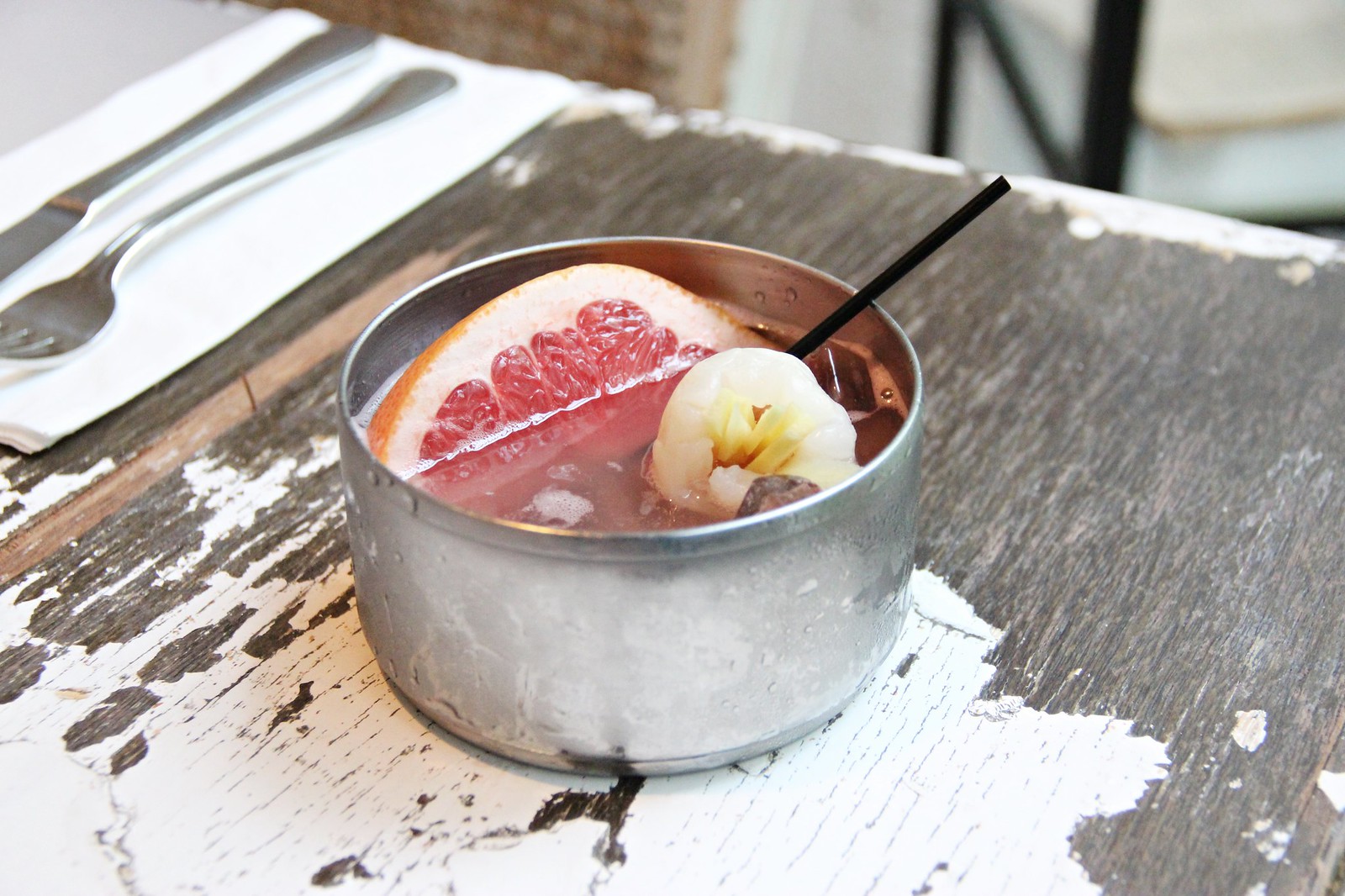 We tried both cocktails from the drinks menu. For something more light and pleasant, the Tiffin Punch ($12 per tiffin, $45 for set of 4) is recommended – it comprises gin, lychee liqueur and grapefruit. 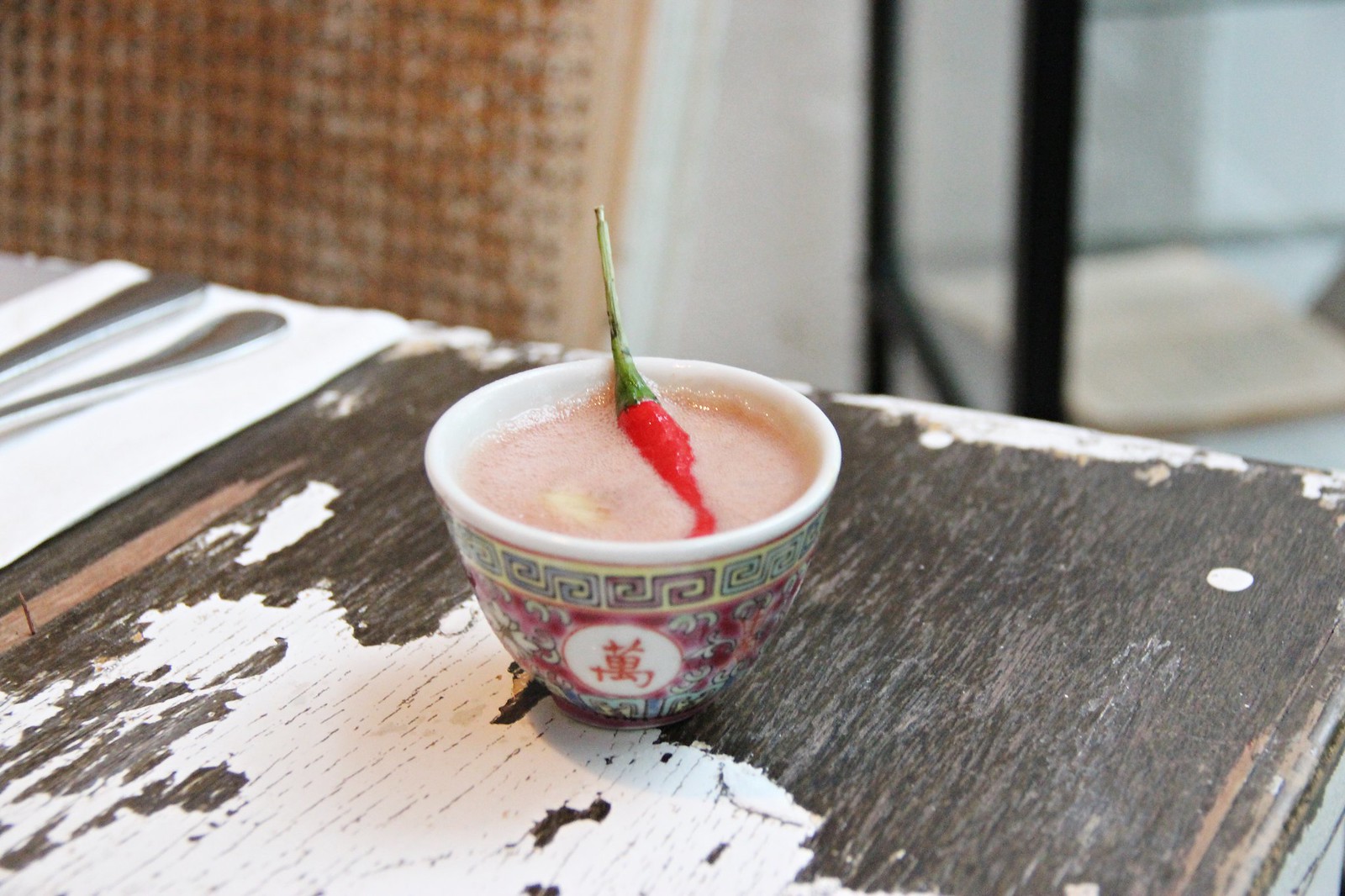 Go for the Tiger Mama ($10) if you would like a spicy kick – spiced vodka, Chambord, cranberry juice, ginger beer. Definitely not for the weak. 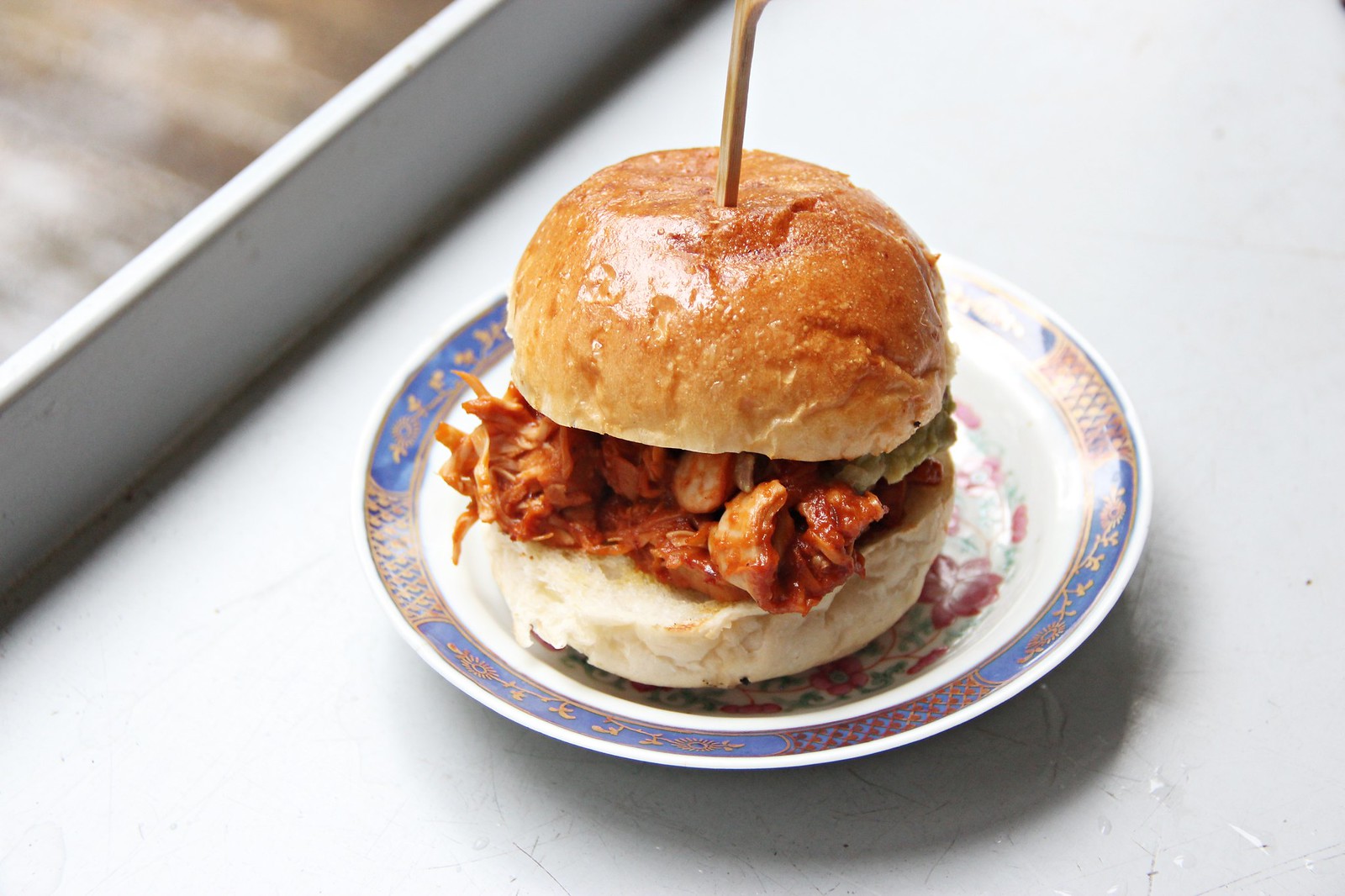 BBQ Jackfruit Bum ($12) – looks like a pulled pork burger but it’s not. This is in fact a vegetarian burger, with the patty made of braised jackfruit slathered with gula melaka BBQ sauce and pistachio-studded guacamole. It may not taste as exciting as pulled pork but it’s still interesting nonetheless.

Wing Bean Toast ($12) – sourdough toast from Tiong Bahru Bakery topped with creamy white mozzarella, wing beans, XOXO sauce and hibiscus leaves. The toast cools and hardens quickly once you leave it out for some time, so the taste did not come out quite as expected.

Cheese Mantou in Chilli Crab Sauce ($14) – deep-fried halloumi cheese blocks to dip in Lazy Susan’s own chilli crab sauce creation. A seemingly simple dish that got me hooked on it. Talk about comfort food. 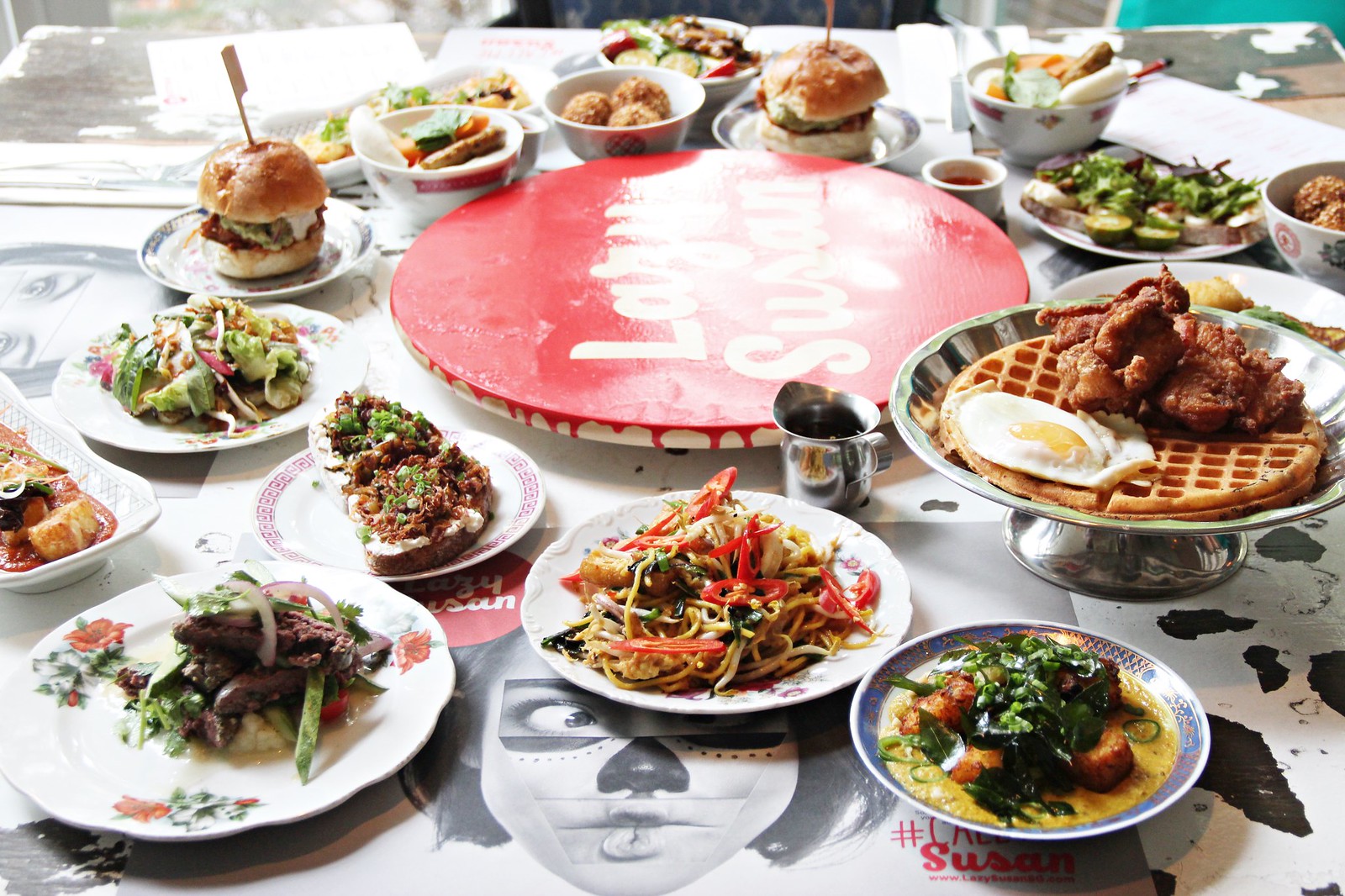 Marry Mee Goreng ($12) – sunny yellow noodles flash fried with fresh seafood, laksa leaves, chives and red chillies. I typically avoid the traditional mee goreng as it can be very heavy on the palate with a deep and spicy flavour but Lazy Susan’s rendition is lighter and more refreshing. 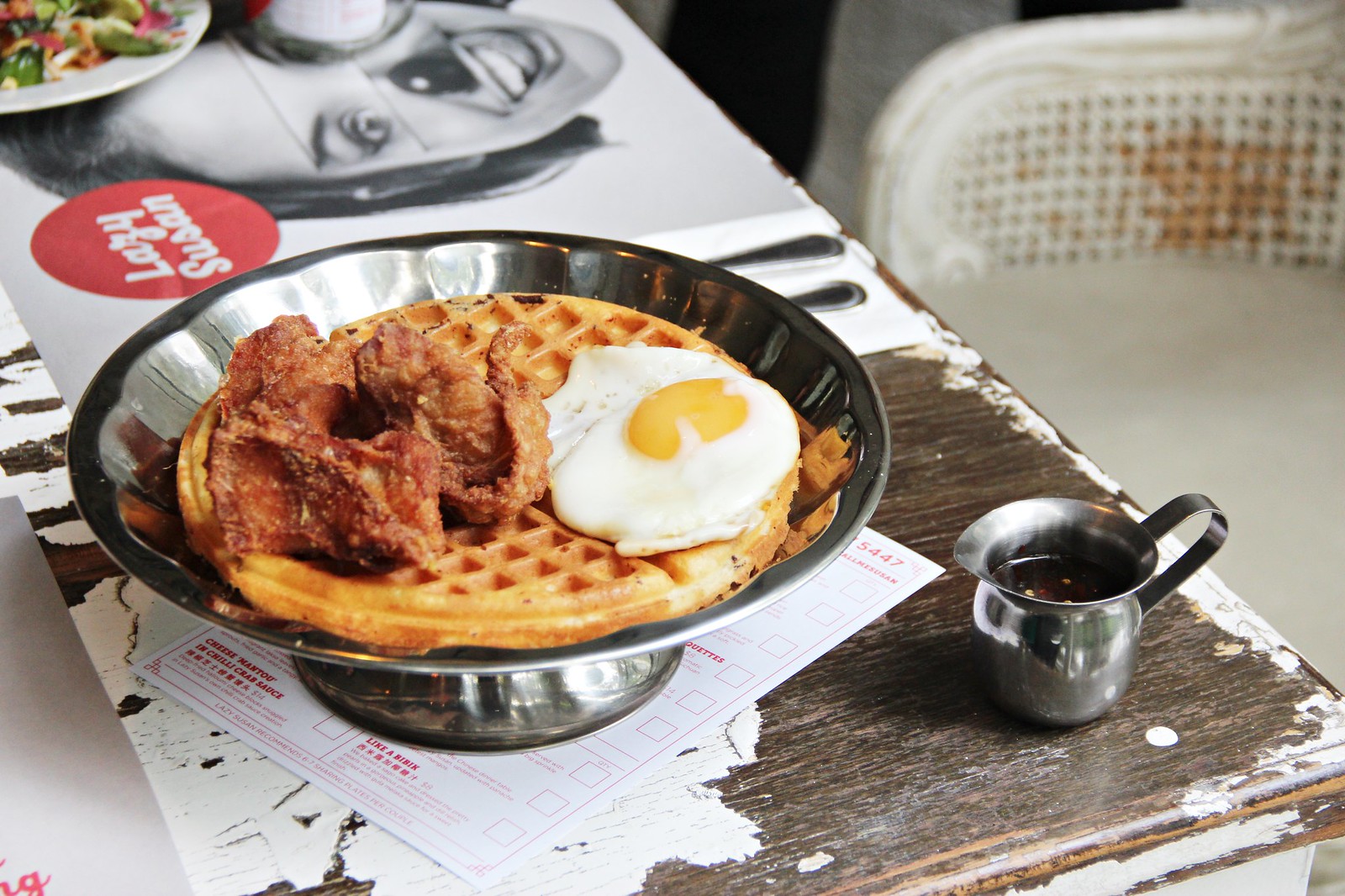 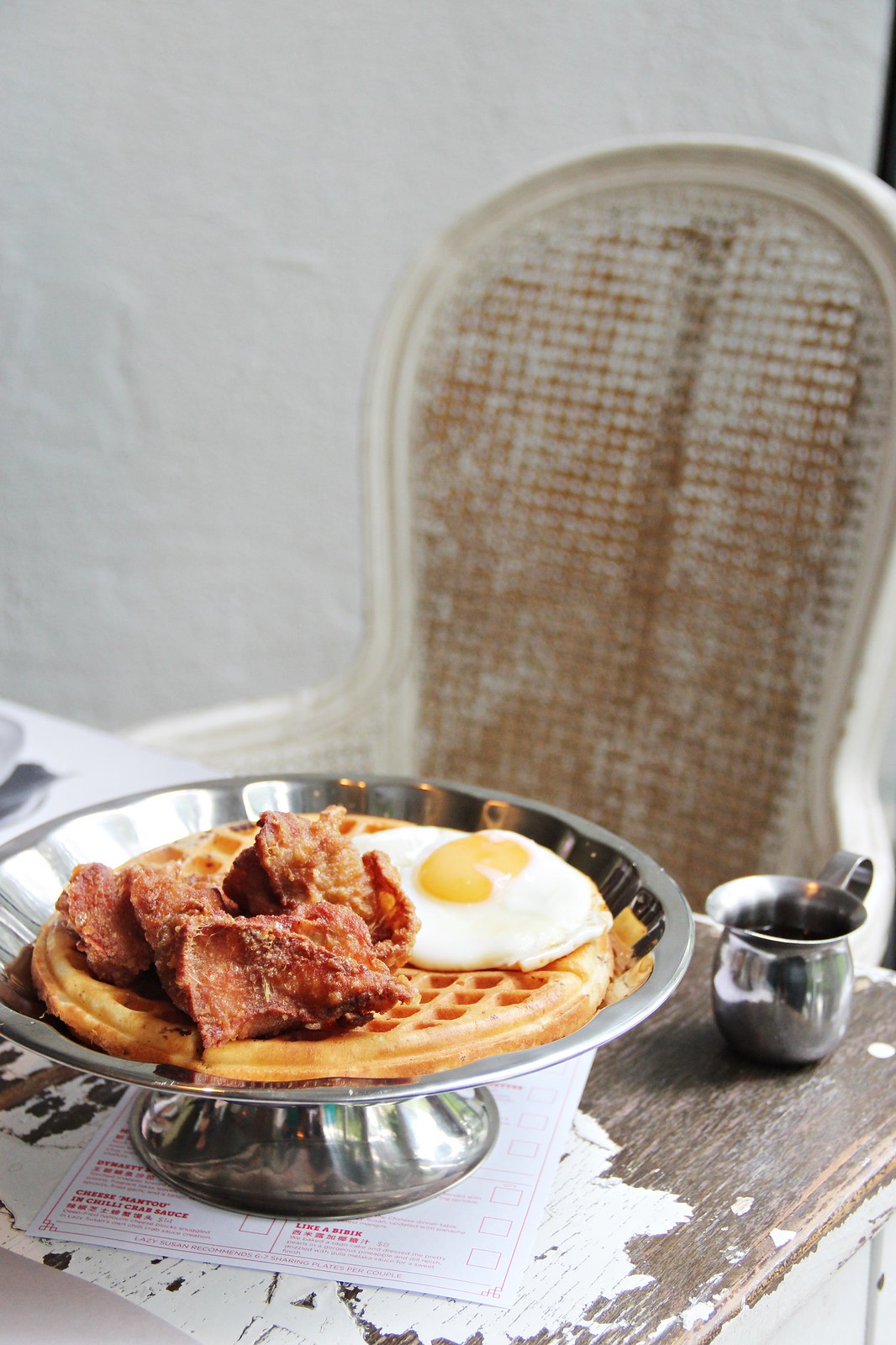 Stinky Meets Crispy ($22) – probably the highlight of our tasting that day. Apparently the chef has only tried har cheong gai once and went on to create this dish of har cheong gai and sunny side-up on rice flour waffles, drizzled with sambal maple syrup. We were impressed by the crisp har cheong gai that even though the batter (for the waffle) could be further tweaked to better compliment it.

Khao Bun ($12) – pork sausage patty infused with lemongrass and turmeric with pickled veggies and coriander in a steamed bun. The lemongrass flavour was a tad too strong for me. 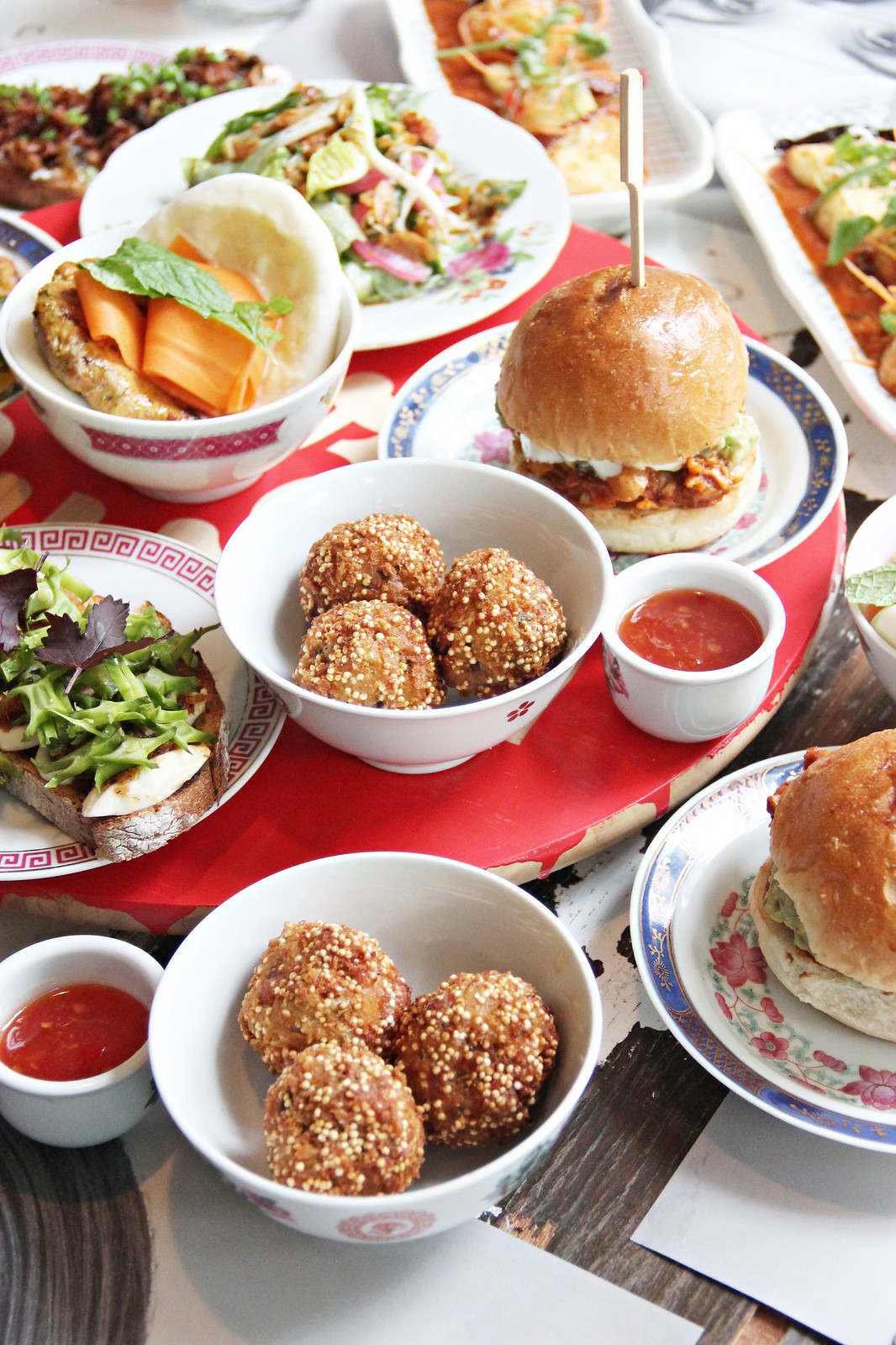 Luncheon Meat Croquettes ($8) – fried glutinous rice balls stuffed with aromatic luncheon meat, Chinese chives and tart Sichuan pickles, all rolled in healthy quinoa. I liked how these rice balls, unlike our Chinese equivalent, are not laden with flour. Rather, they are filled with quinoa and it does feel slightly healthier. 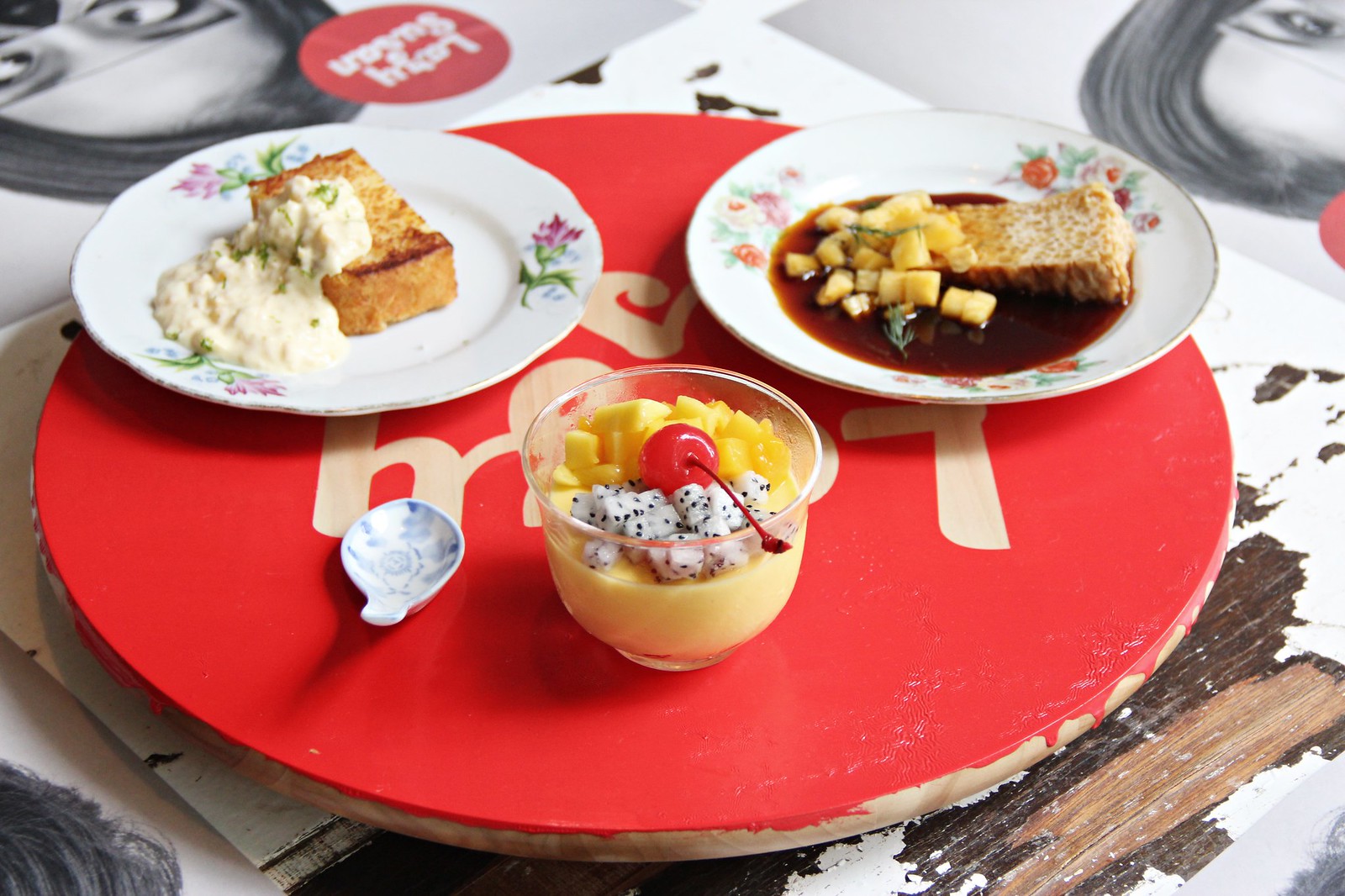 On general, we felt that the 3 desserts on the Lazy Susan menu were rather underwhelming with small portion sizes yet hefty price tags on them. Among the three, the Cornfield Cake ($8) was our favourite. The grilled corn-cake that was served with fresh creamed corn and balanced with a big sprinkle of sea salt flakes was saved by the sea salt which gave the otherwise bland cake a sweet-salty touch.

Meanwhile, we felt that the Mango Pudding ($8) – was normal and really not worth the 8 bucks which could get us a good slice of cake from House’s dessert menu.

Like A Bibik ($8) is a baked sago cake in pineapple and dill relish, drizzled with gula melaka sauce for a sweet finish – some will like it, some will not.

I say: Go for some plates to share, try the har cheong gai and maybe skip the desserts. Expect an array of flavours and watch out if you don’t take spicy food. 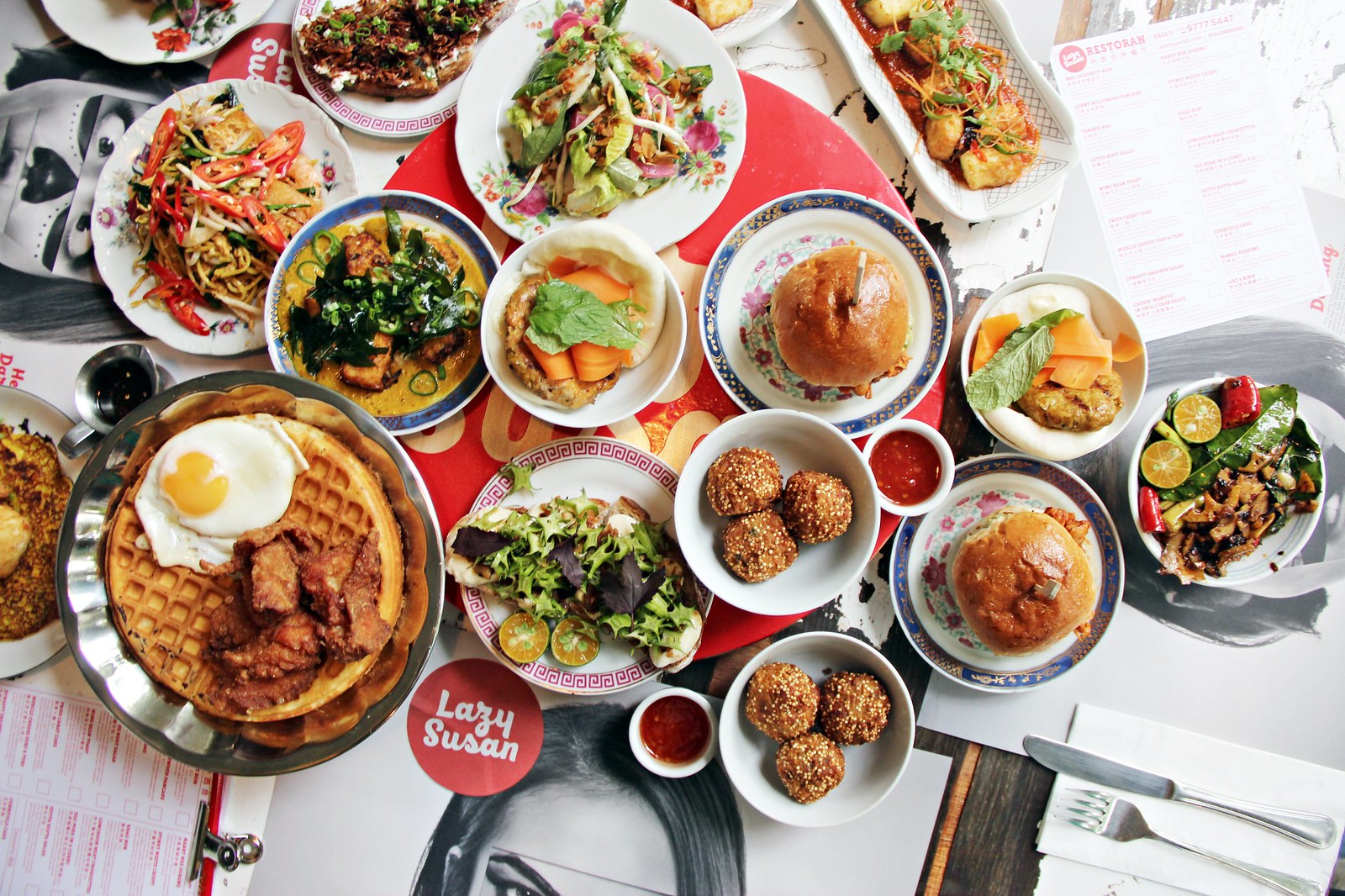 Thanks Janet and Spa Esprit Group for the invite!