Autumn in Seoul – 5 Spots to Catch the Fall Foliage

My stay in Korea last year encompassed many firsts in my life – flying alone, living independently of my family, solo travelling… and autumn. My first genuine autumn after 21 years of stale summer in Singapore. It was the season where I never felt like staying indoors, the season where everything seemed to have a sentimental value to it, the season where memories of rough summer days were awashed by freshness.

In this post I’m sharing a few spots where I saw some unforgettable scenes of fall foliage in Seoul. I’ve actually picked and edited the photos in this post eons ago, but I missed the timing to write it, and eventually resorted to waiting close to a year to get this up. The best time for sight-seeing of foliage in Seoul is from the last week of October to the first week of November! 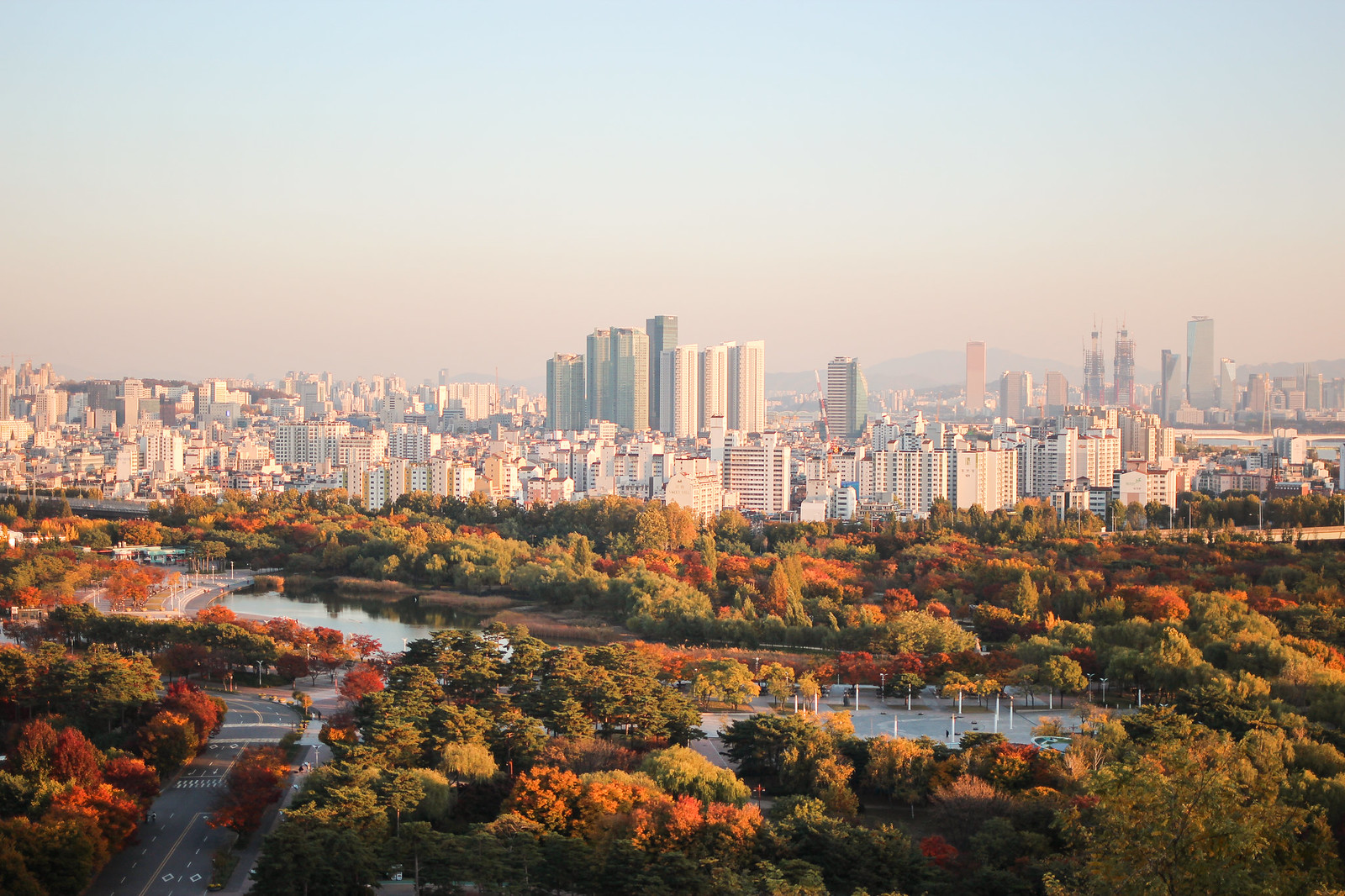 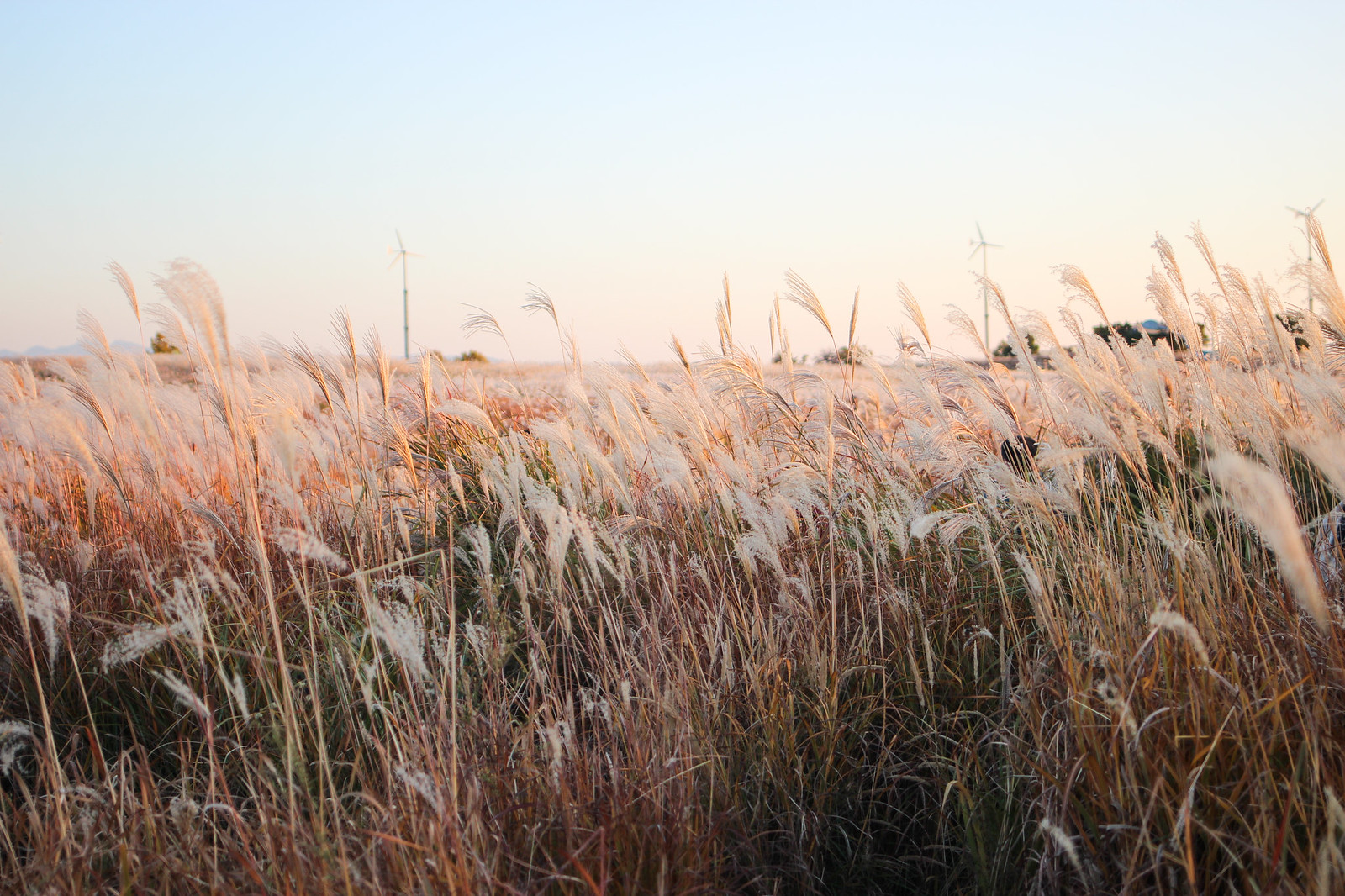 One of the 5 parks of the World Cup Park, Haneul directly translates to ‘Sky’, it’s name befitting of its location on the highest part of the World Cup Park on a hill. To get up, you can either pay a small fee for a tram or climb up 291 steps of stairs. I recommend the latter for the views on the way up, and also since the weather will not make you break out in a sweat. 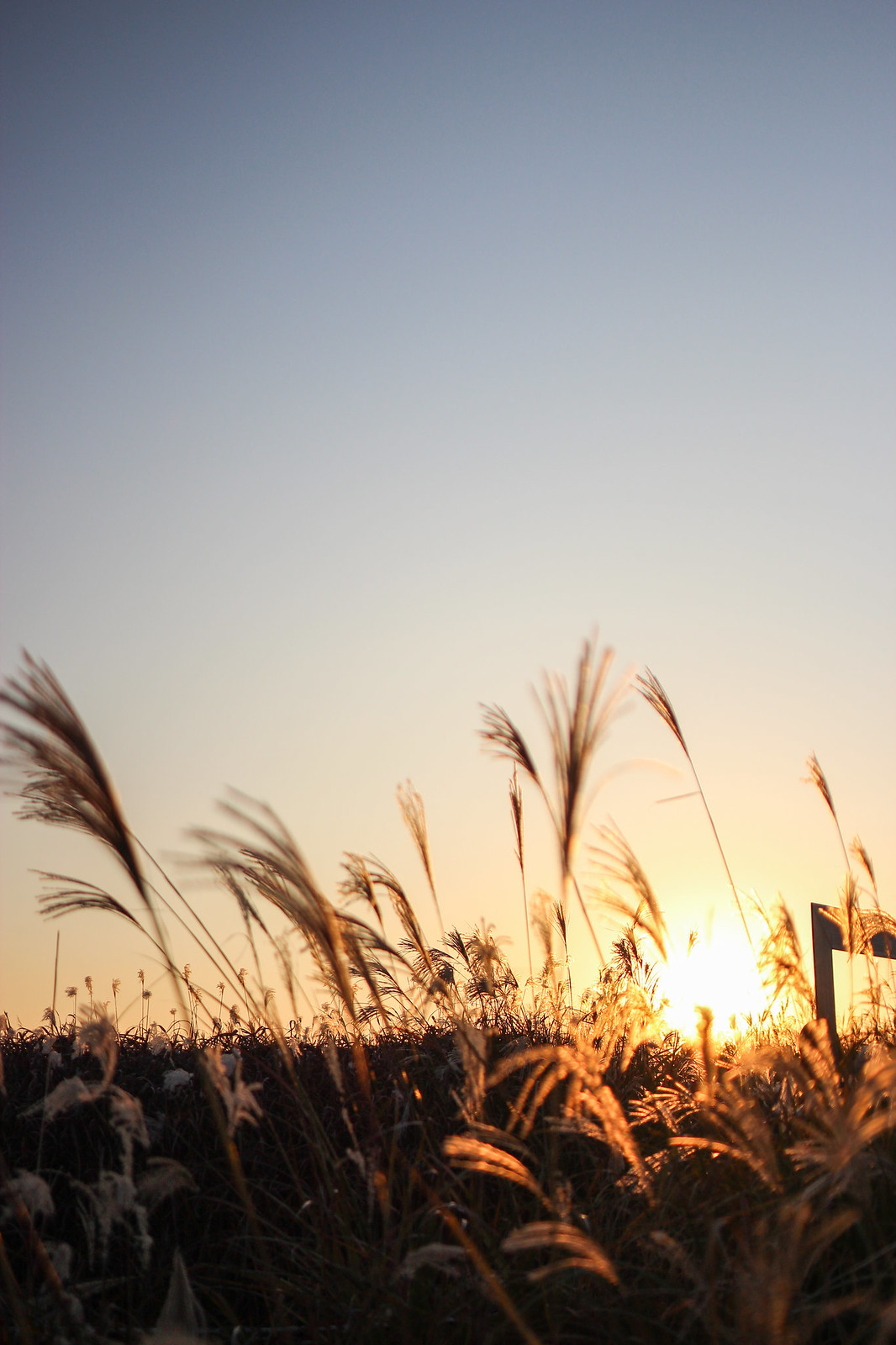 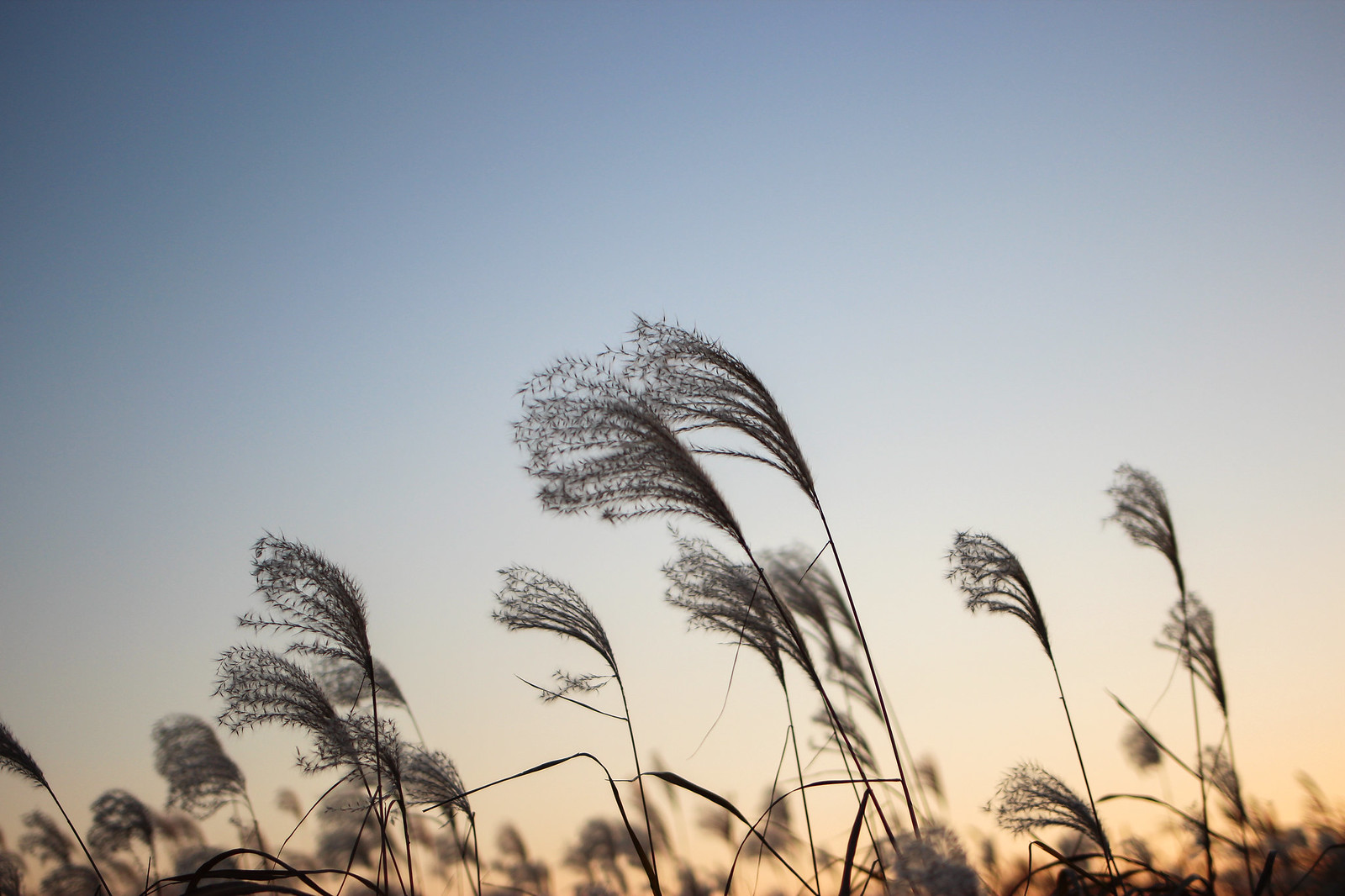 I can’t remember how I first came to know about this park, but when my first time there was actually in the transition phase of Spring to Summer. During that time, the park was not crowded in the slightest bit and filled with mostly green plants, with occasional splashes of colours from planted flowers. Visiting again but in autumn was a different thing altogether – throngs of people (both locals and tourists) and the rich luscious colours of fall created a lovely bustling atmosphere. 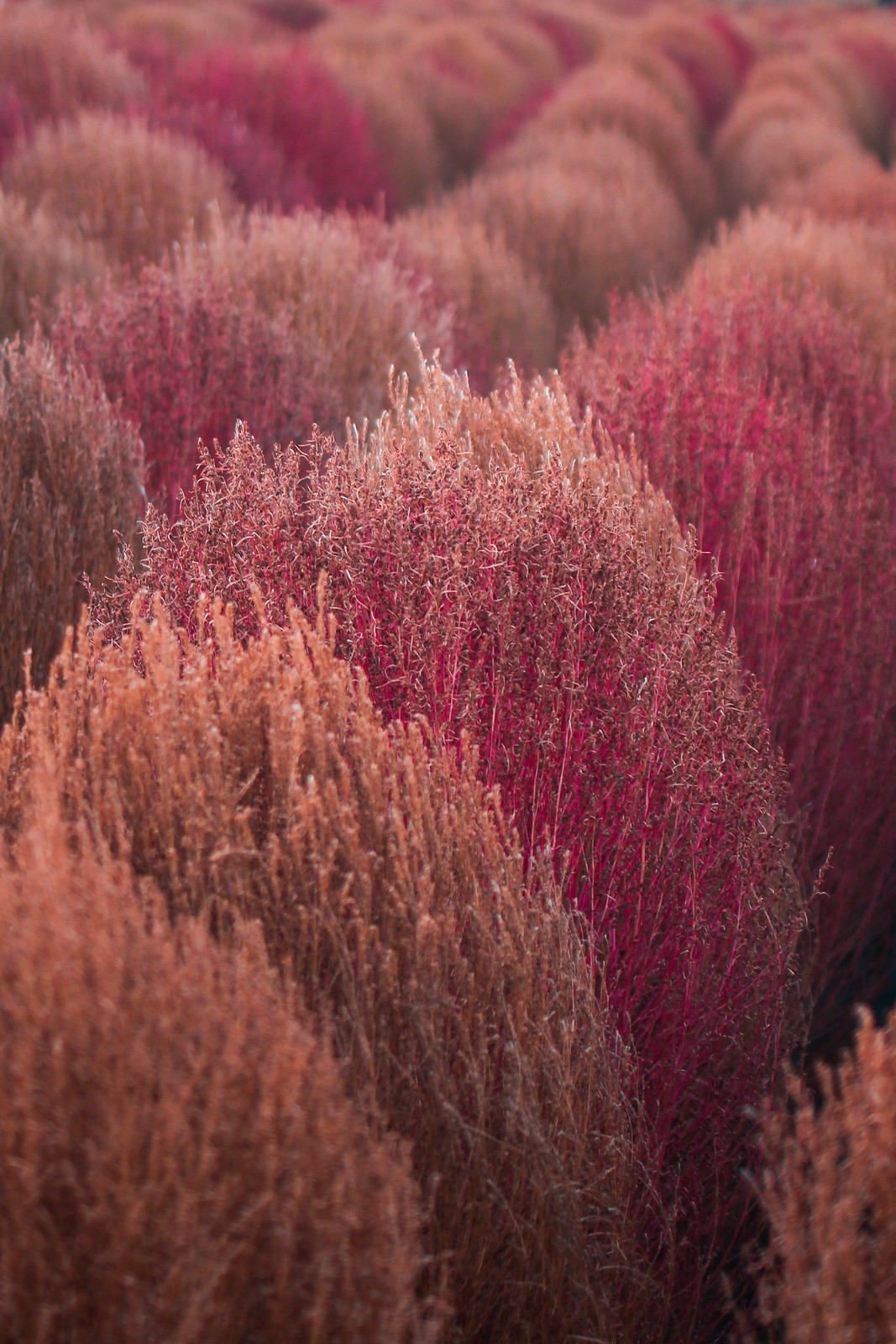 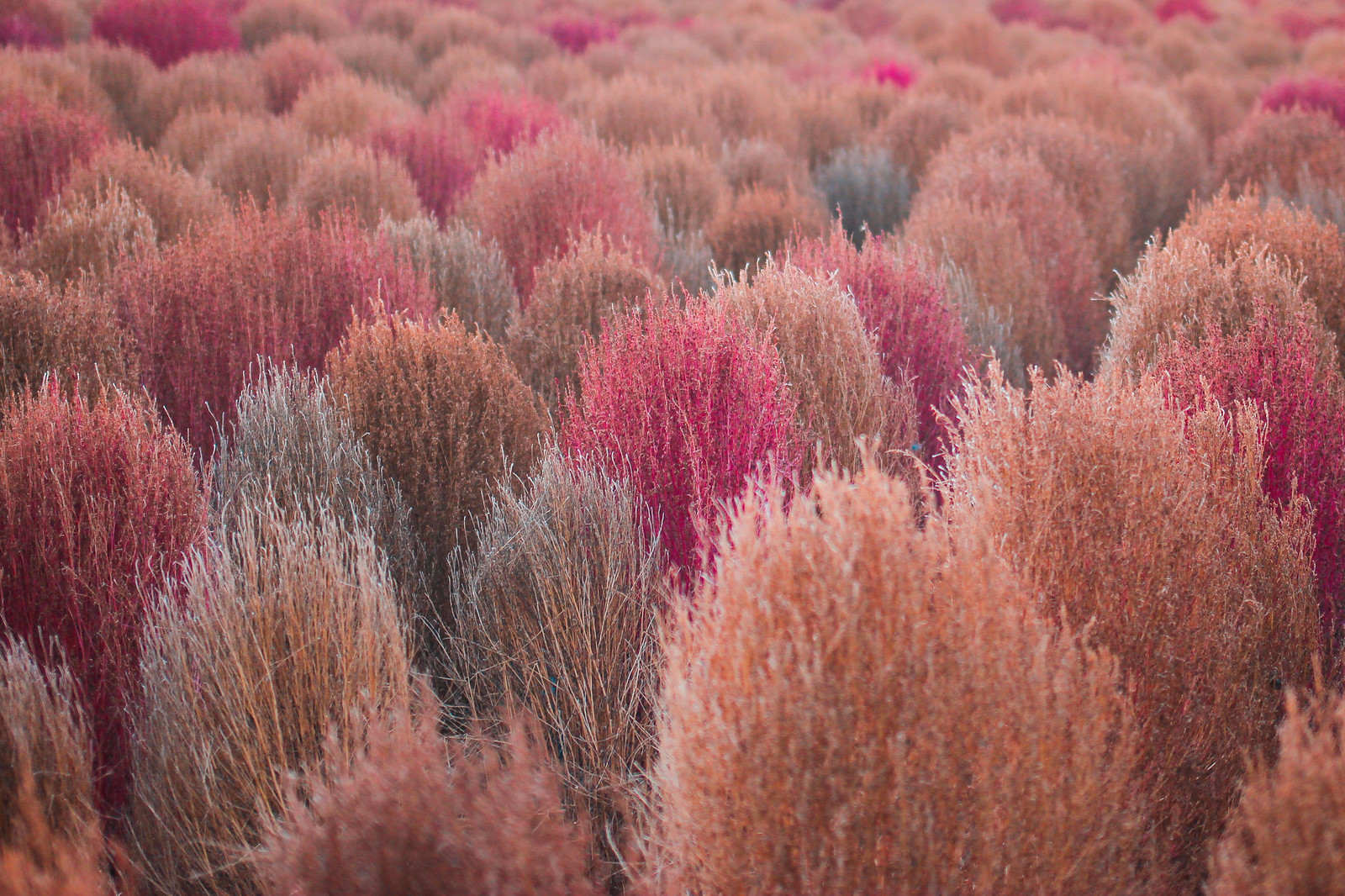 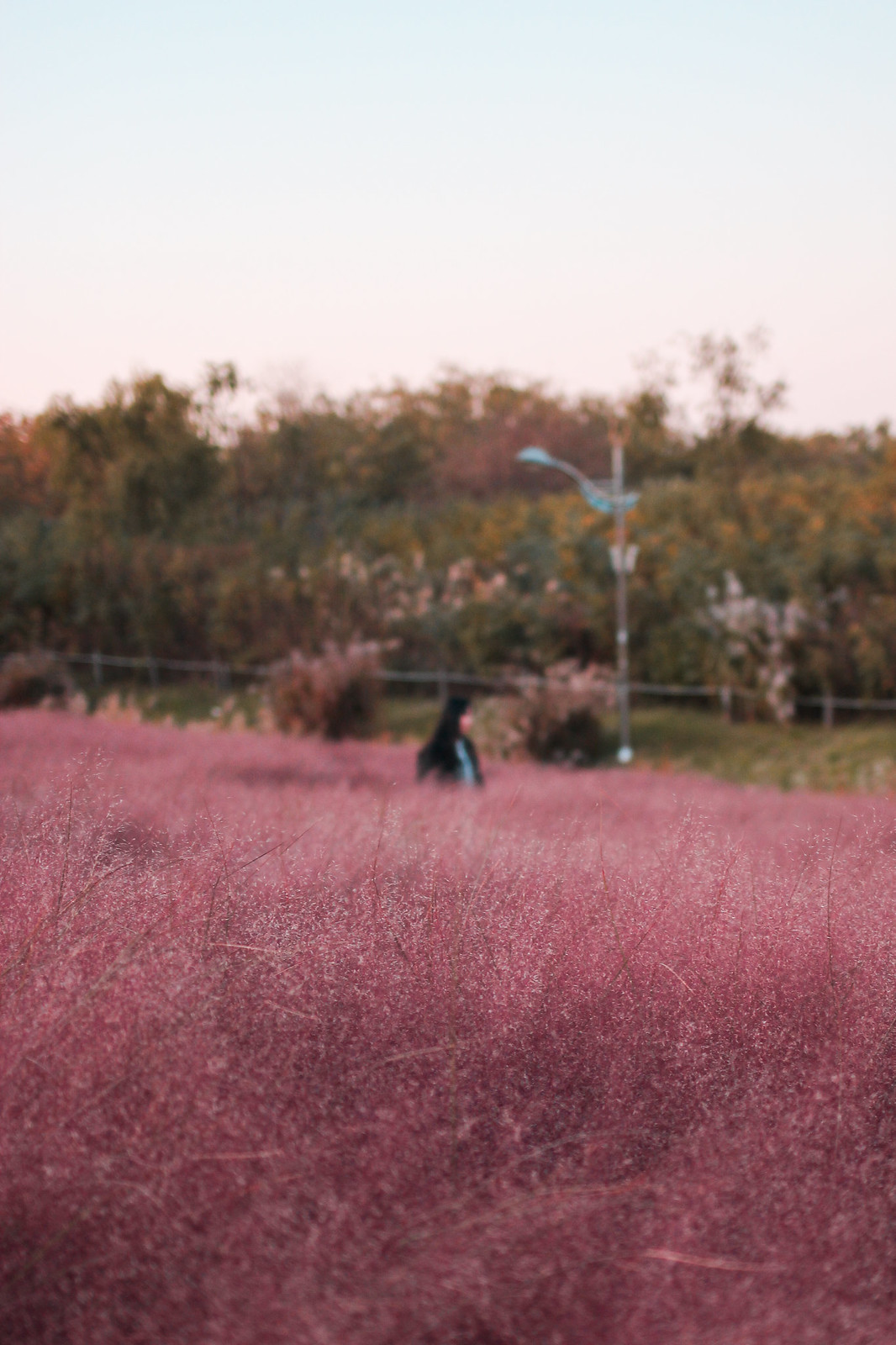 The two most representative plants at the park in autumn are the silver grass and pink muhly grass – though you may find them at spots all over Korea, the fields at Haneul Park are expansively planted with them and divided into specific zones. The best time to go would be at sunset, when the park is tinged with soft, golden light. 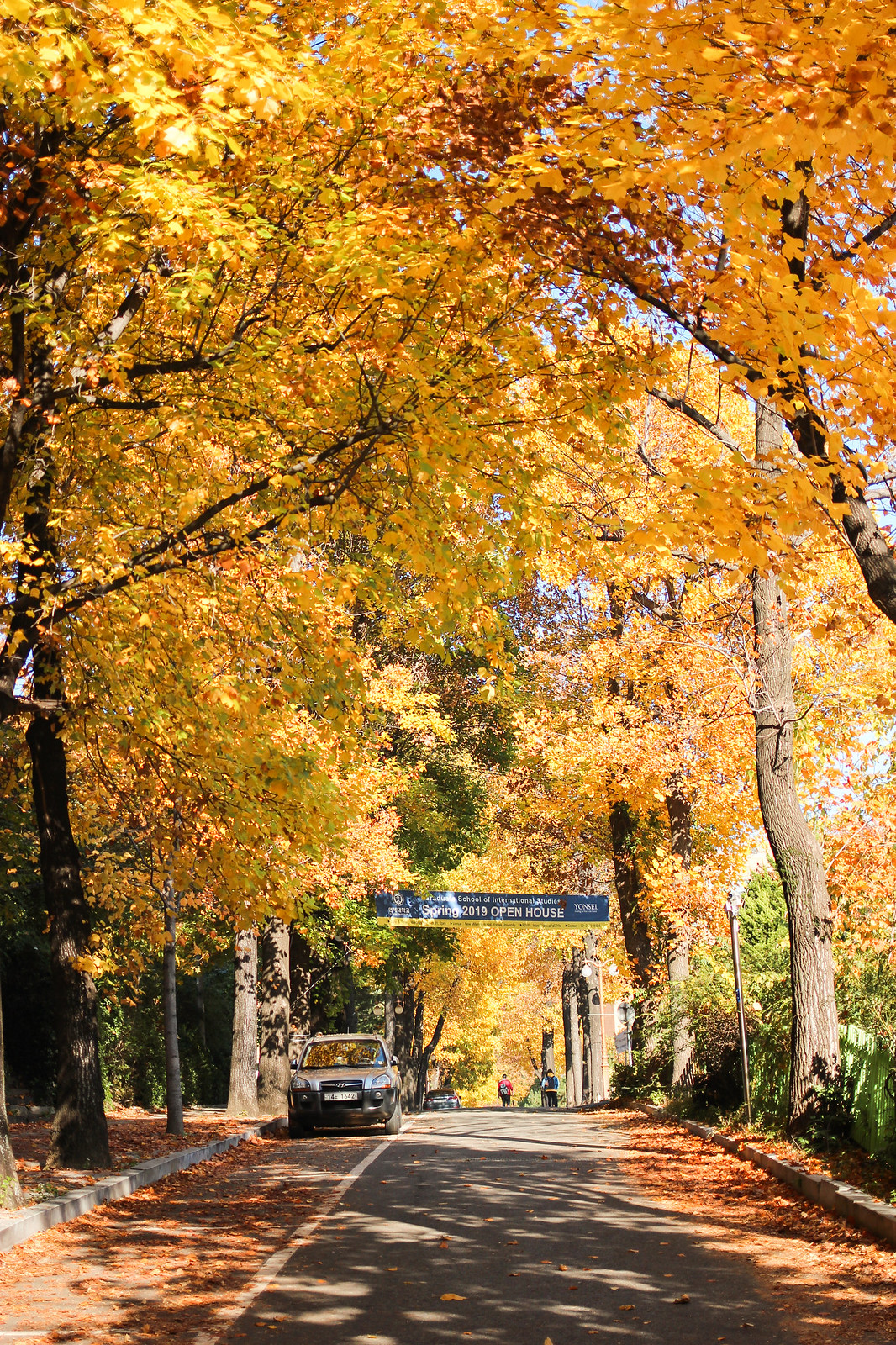 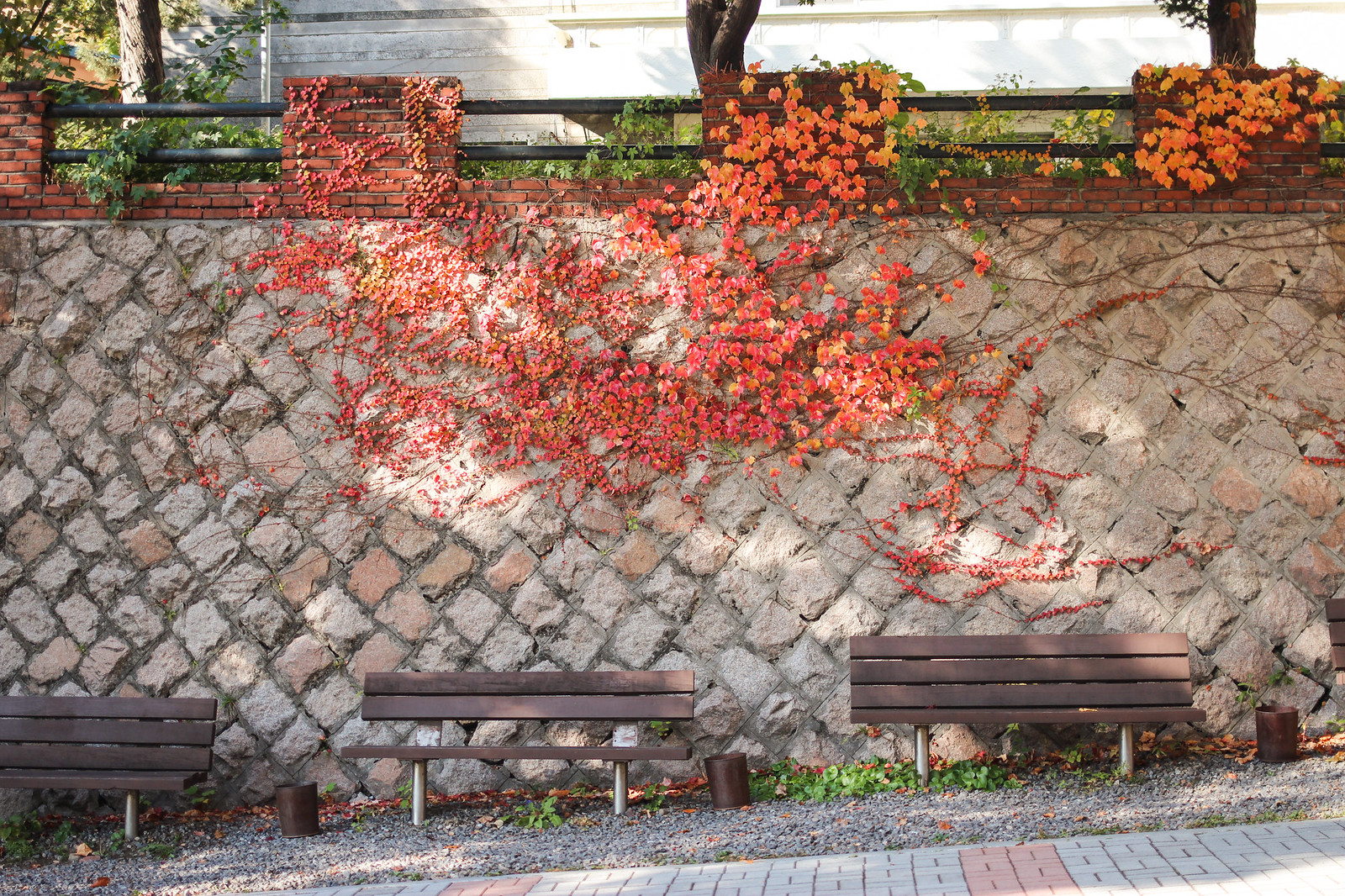 Having attended Yonsei University for a short semester, I’ve seen the transition from late summer green to autumn yellow, orange and red like a time-lapse video. The day-to-day anticipation was fluttering, and slightly kept me energised for lessons even.

Most people know about the main pedestrian path of the school that starts from the main gate and that leads right all the way in to the heart of the school – in autumn, the gingko trees that neatly line this main road turn yellow. However, I preferred the foliage found deep in the remainder of the school – the gingko trees are larger and more densely grown with leaves and more fall colours can be spotted. I snapped these two photos on an uphill road that serves as a side entrance to the school. 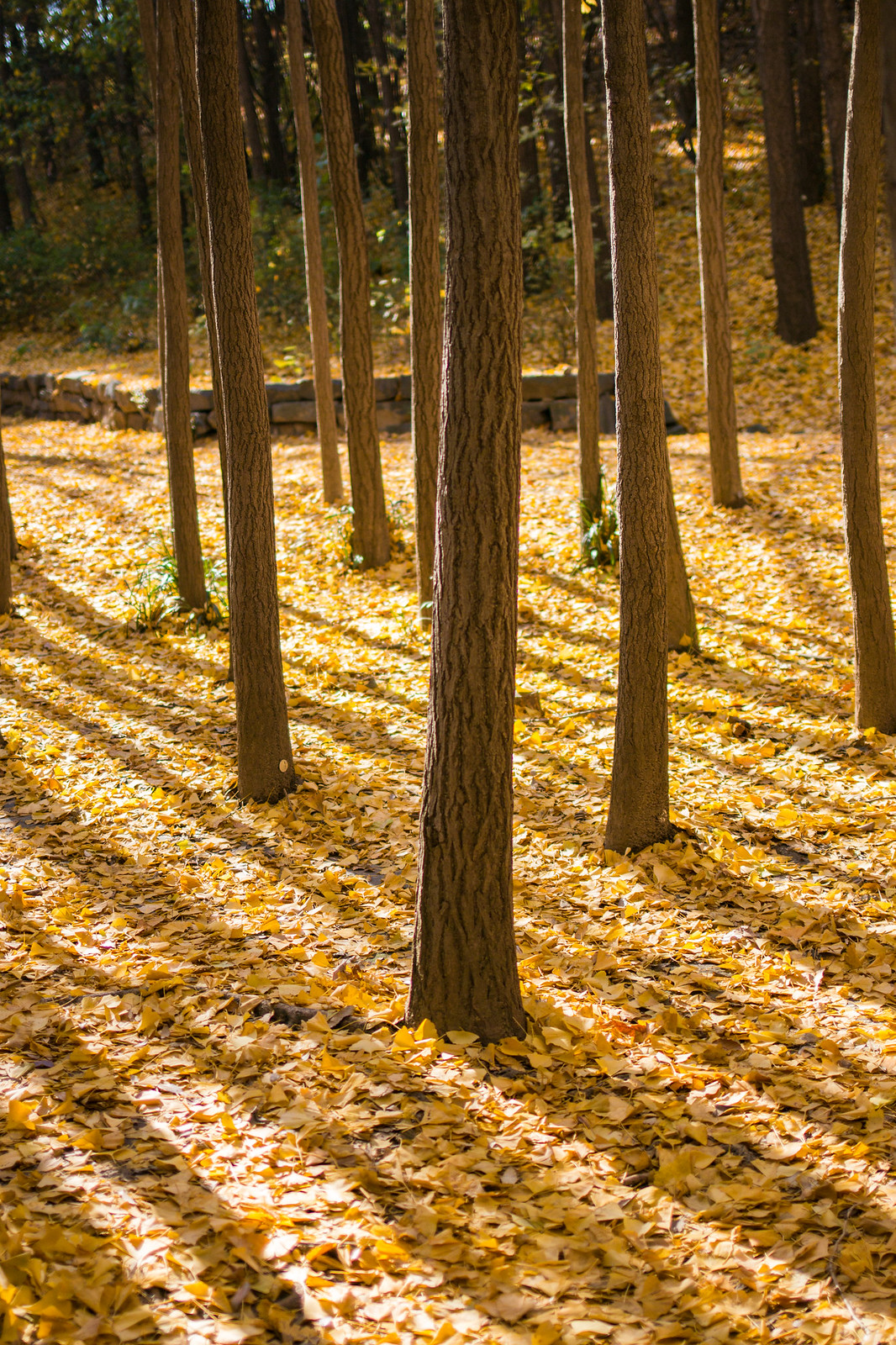 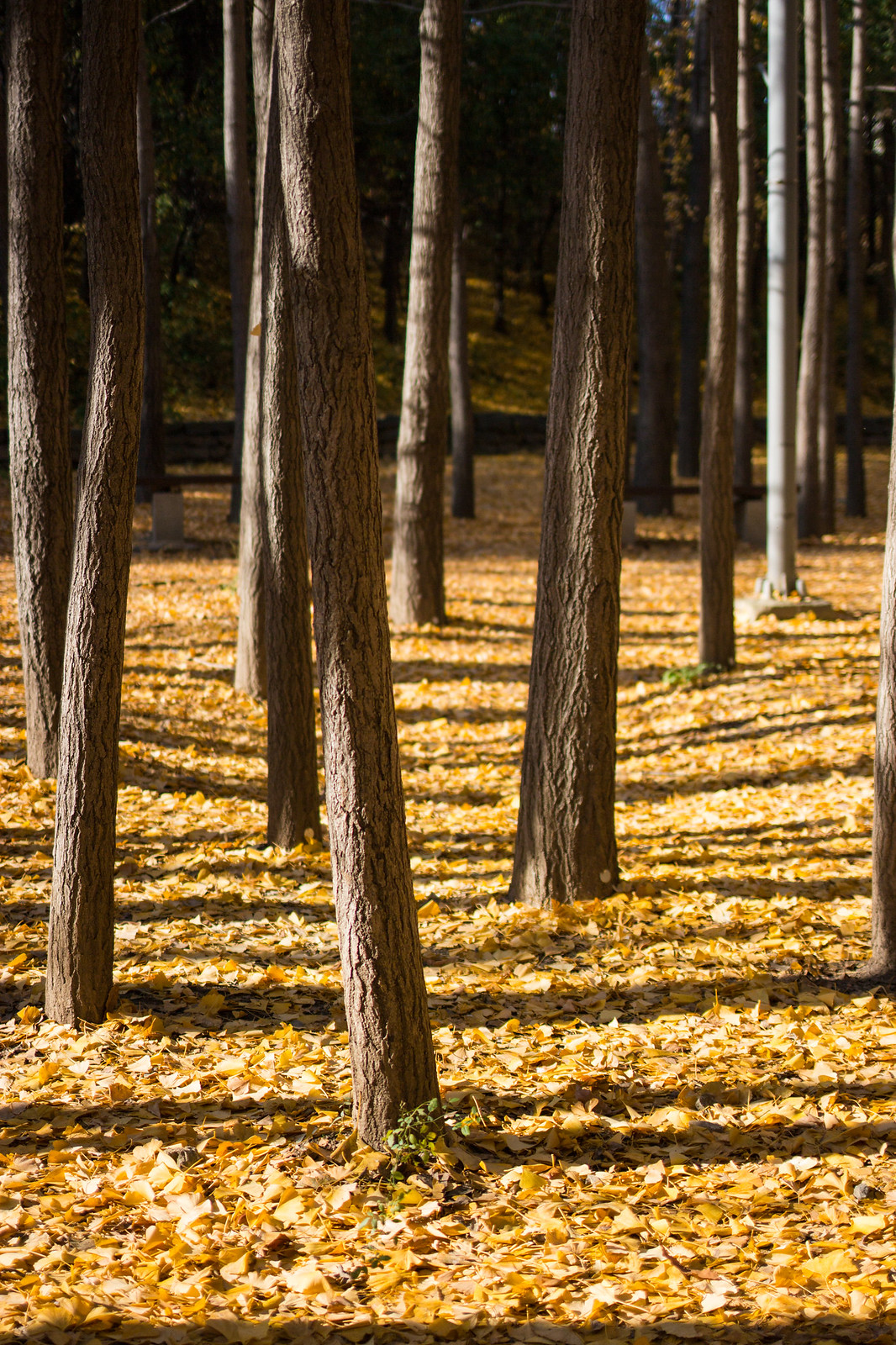 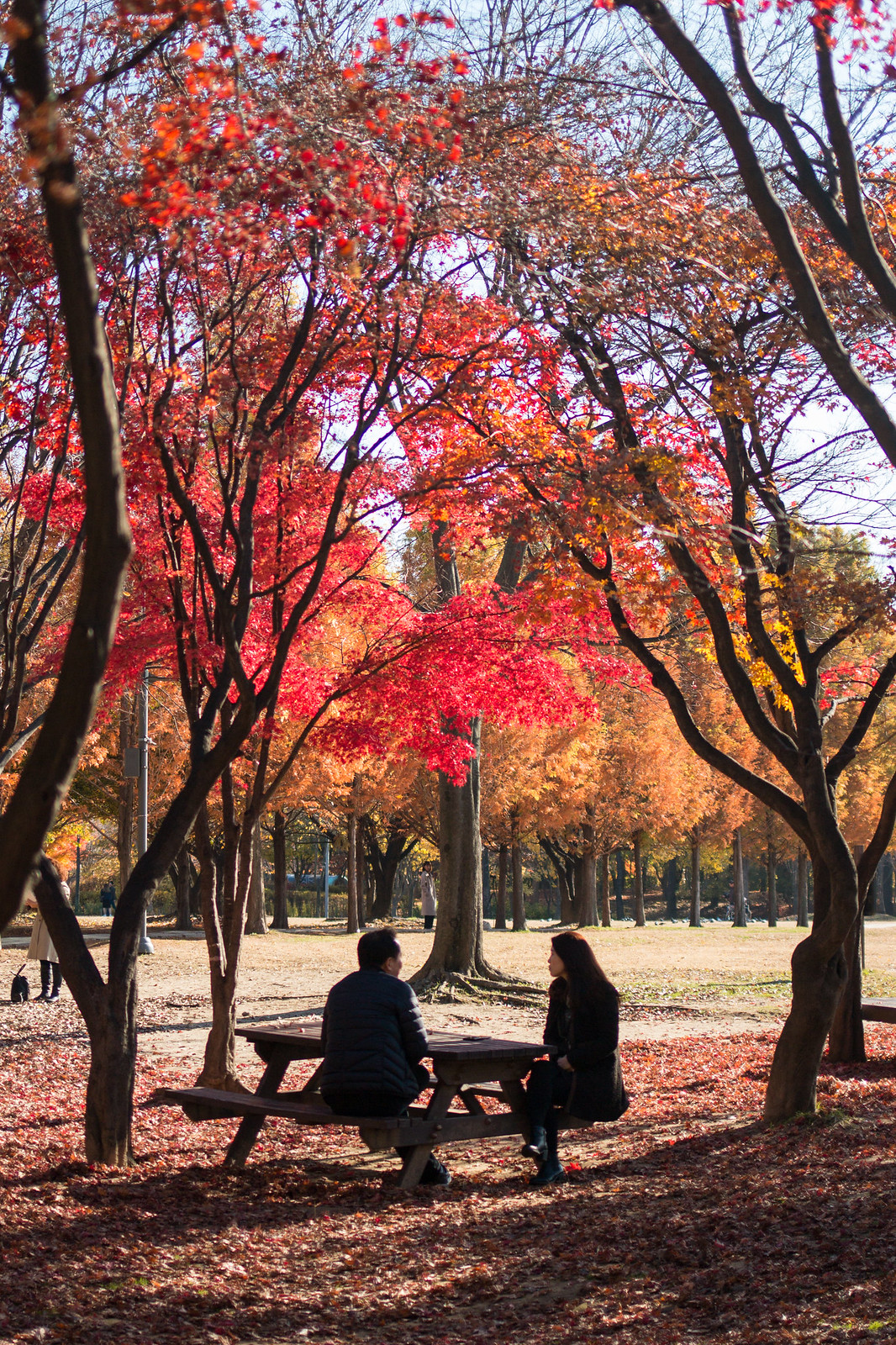 When I finally had the time to go to Seoul Forest with my camera, the weather had become much chillier (necessitating a winter jacket) and the season was about to come to its end. While thinking to myself if I had made the wrong choice in making a futile journey, I chanced upon a vast field of yellow fallen leaves. Bare trees grew interspersedly, while the afternoon sun cast their long shadows cast all across the field of yellow, creating a brilliant canvas. I spent a good amount of time there, before moving on and picking out the remaining trees in autumn bloom. A good number of maple trees were still bearing red crowns, thankfully.

P.S. Along Seoulsup-gil which is just right outside the park, there is a small cafe district that I feel is worth heading to after a stroll in the park. 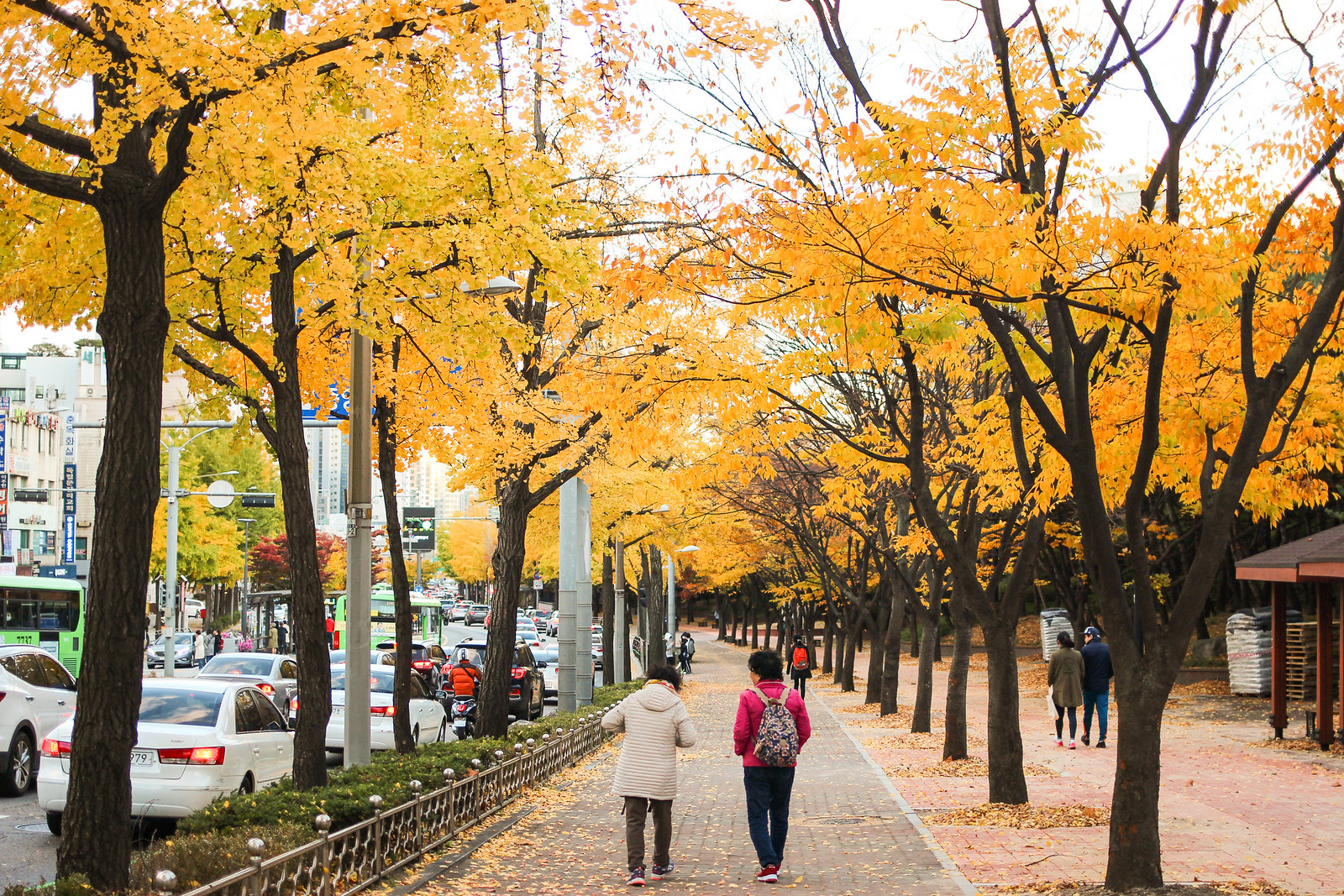 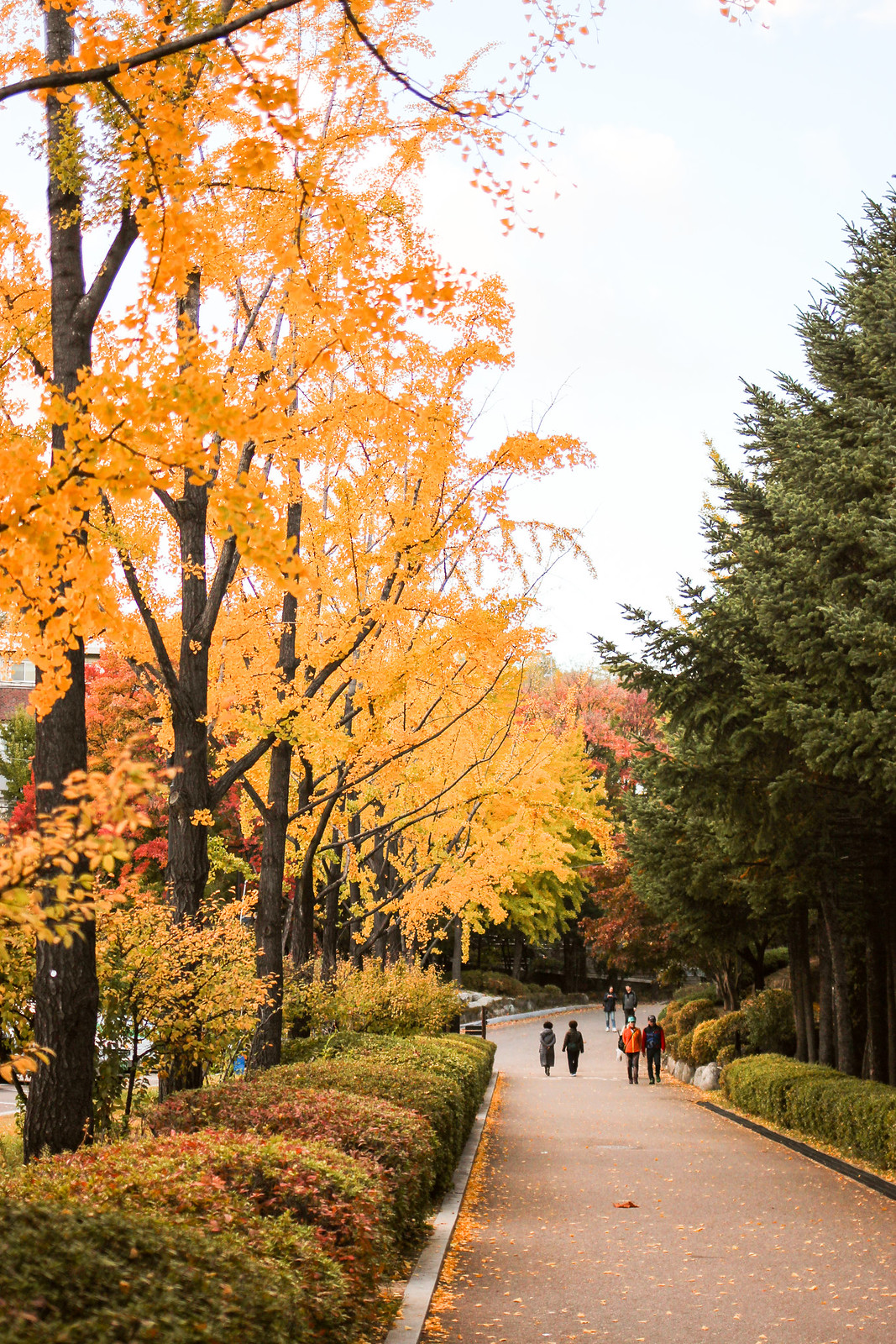 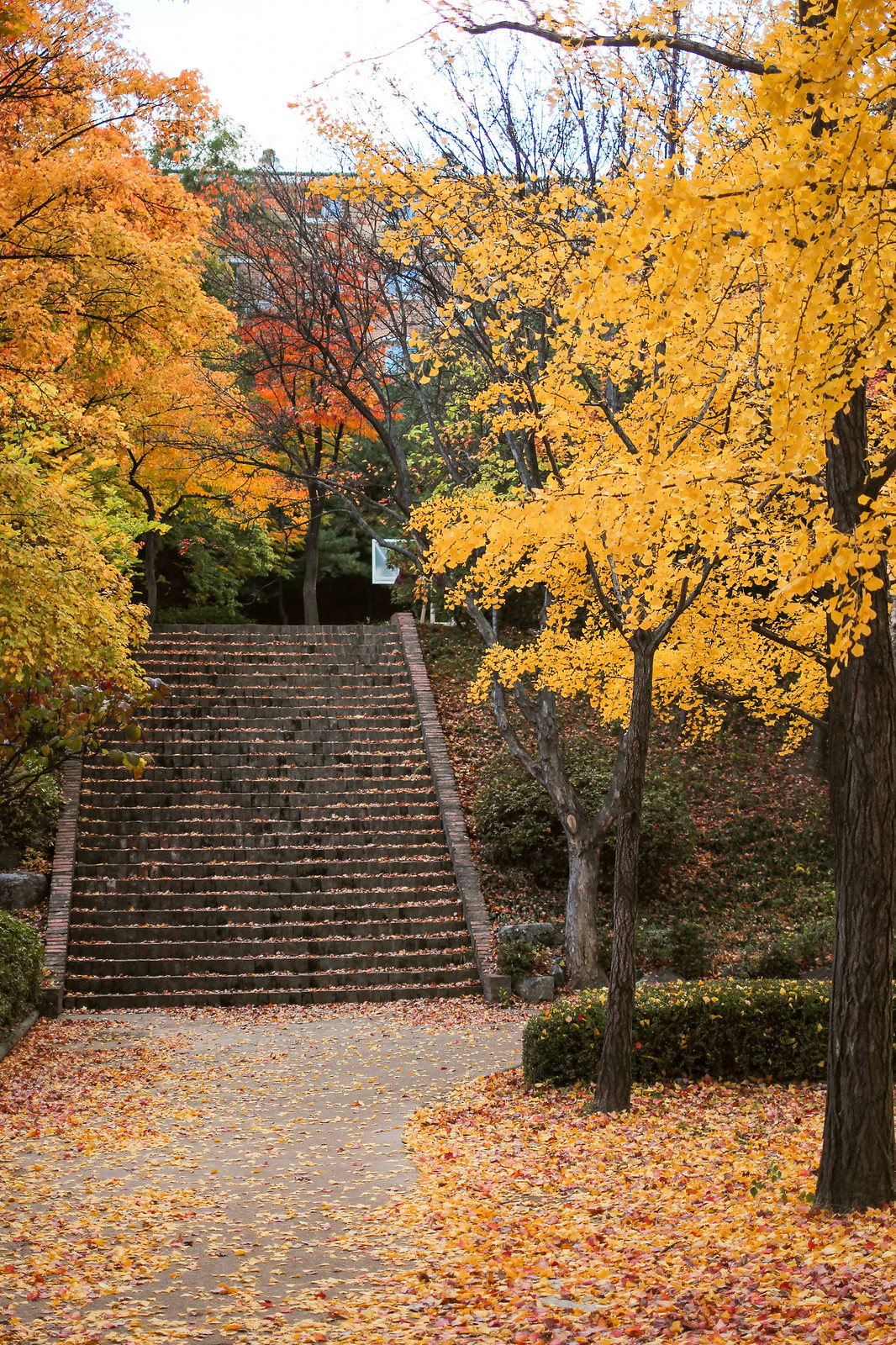 The fall foliage at this park was an unexpected and surprising find. I alighted at Dongnimmun Station in hopes of finding the path through Ansan Park that would lead me up to Ansan Mountain, but didn’t manage to do so. 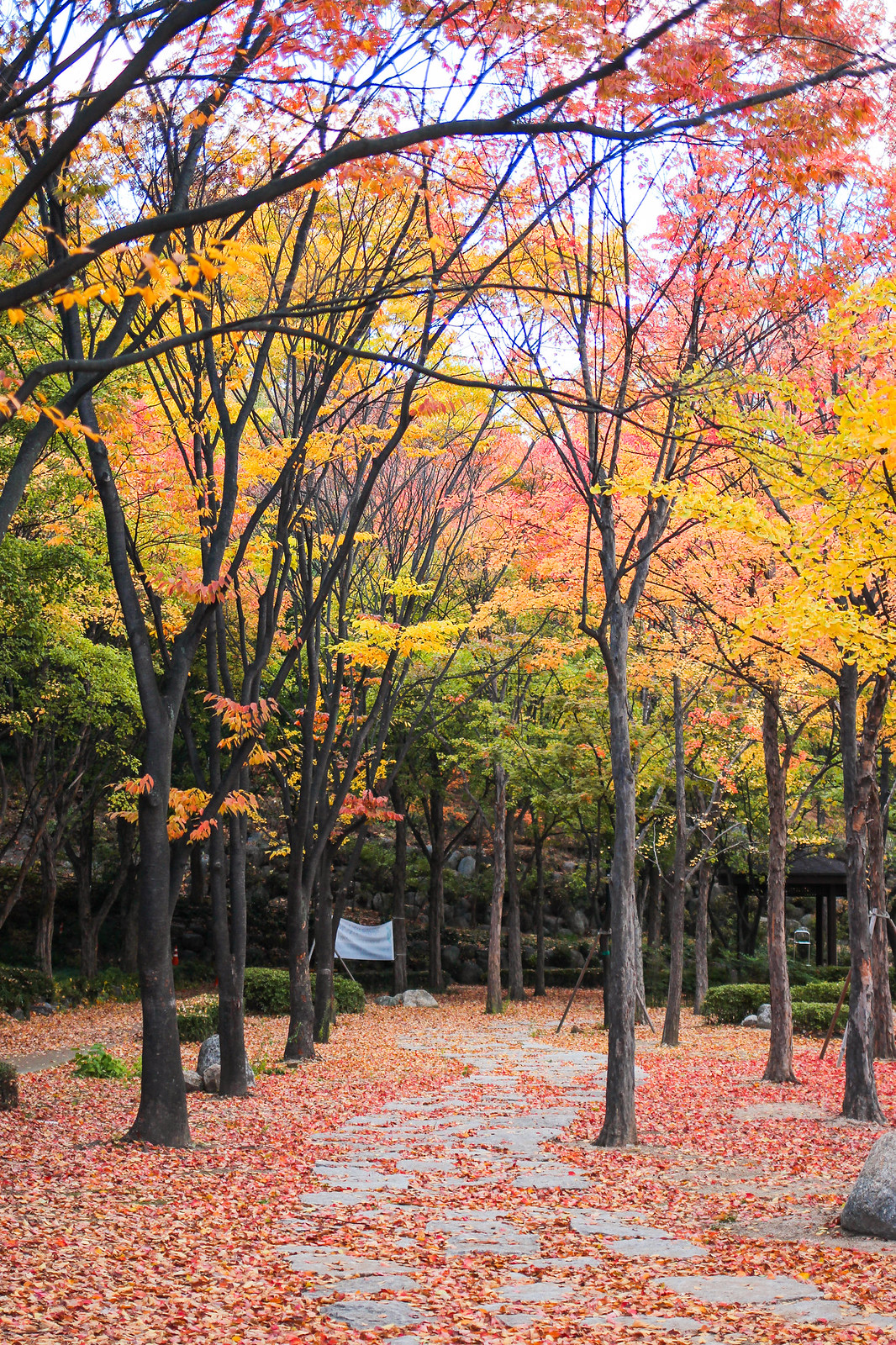 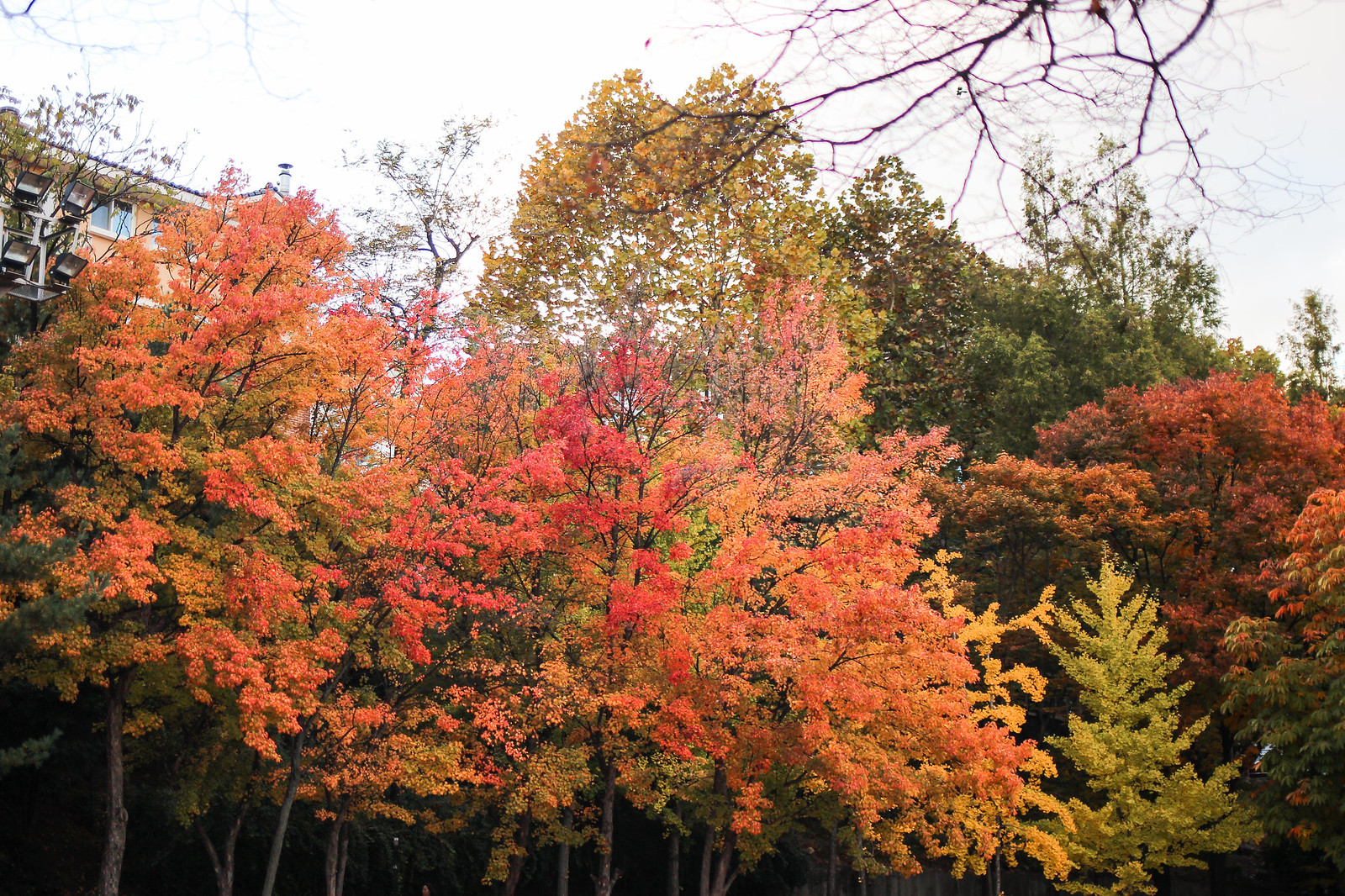 Instead, I found myself at Seodaemun Independence Park (did not even know the name of the park at that time), an important historic cultural site serving as a remembrance of Korean liberation activists during the Japanese colonial period. It is also the grounds of the Seodaemun Prison History Hall and Museum which was used to hold Korean independence fighters captive. 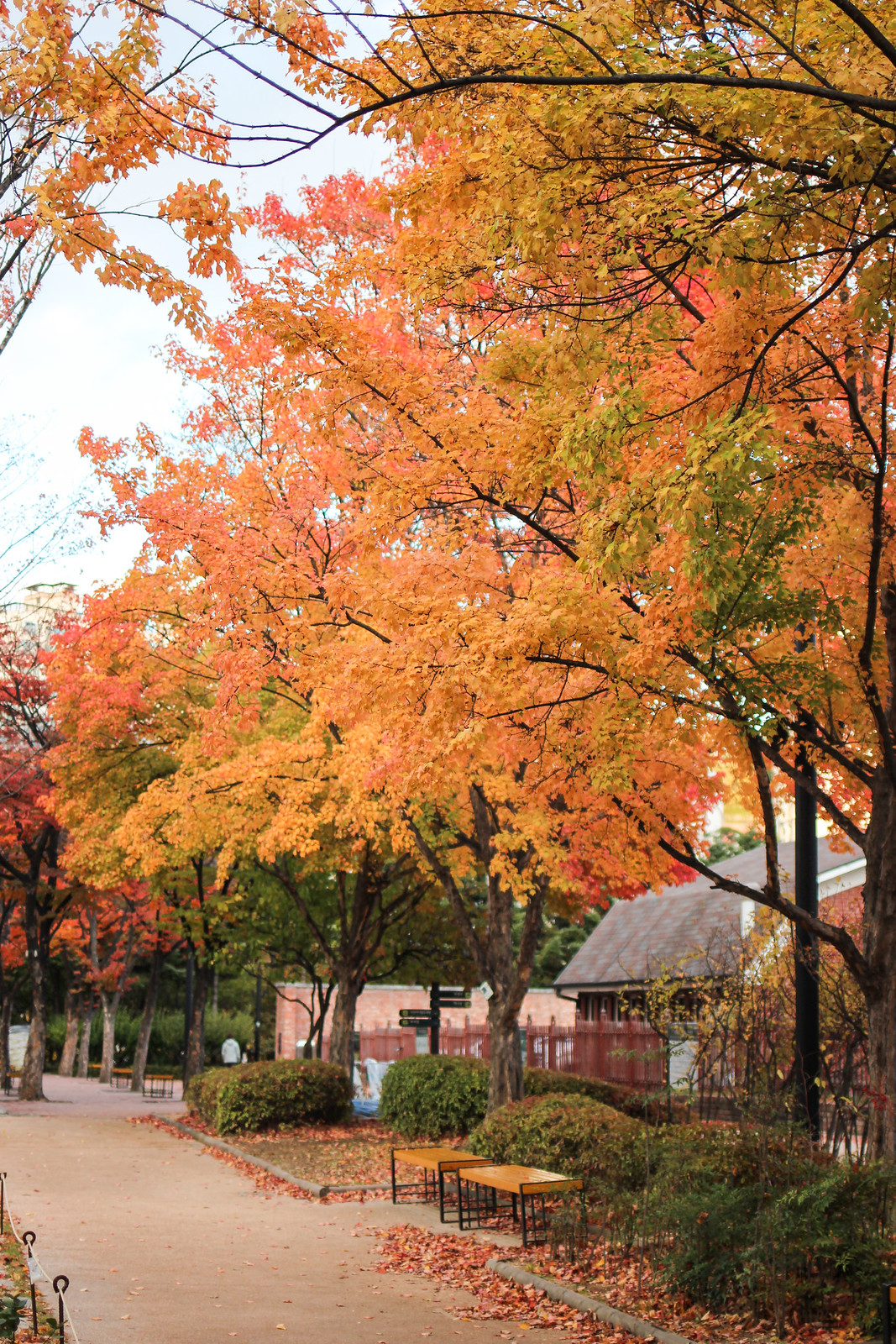 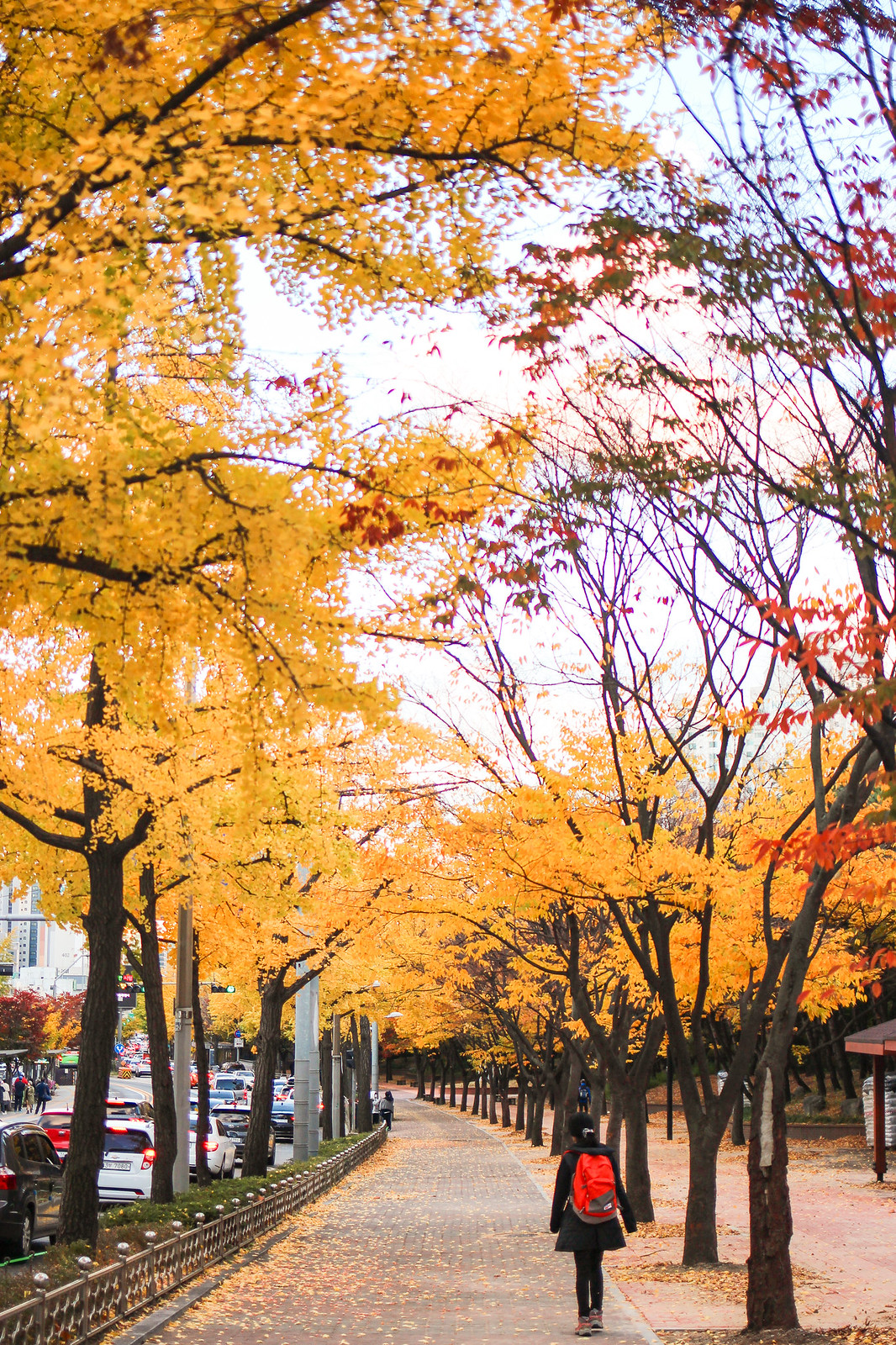 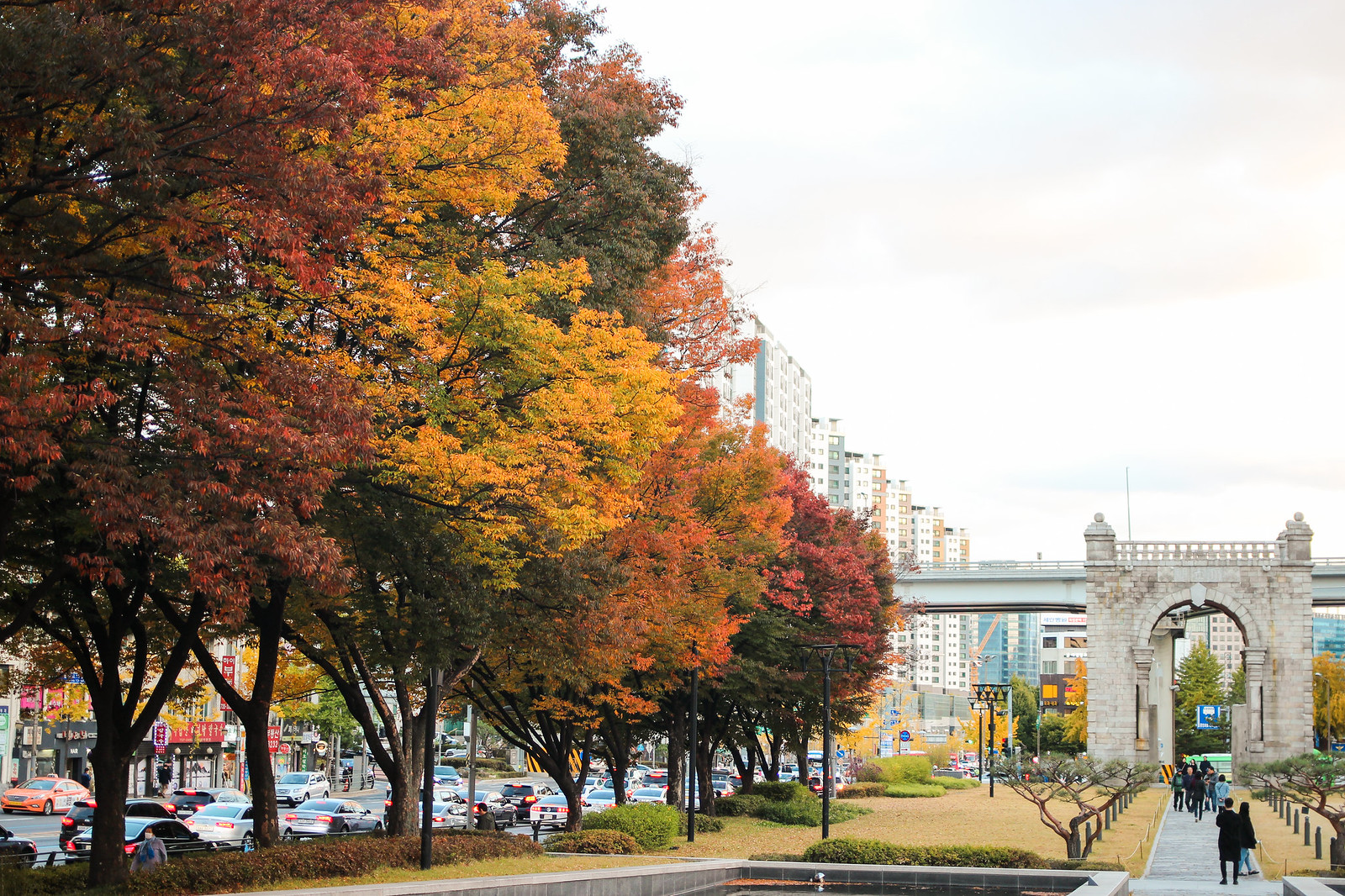 Several other monuments were erected in the park, and there were also many spaces provided for recreational and family activities. The historical site, together with the background of lush foliage in varying colours, created a grandiose sight. 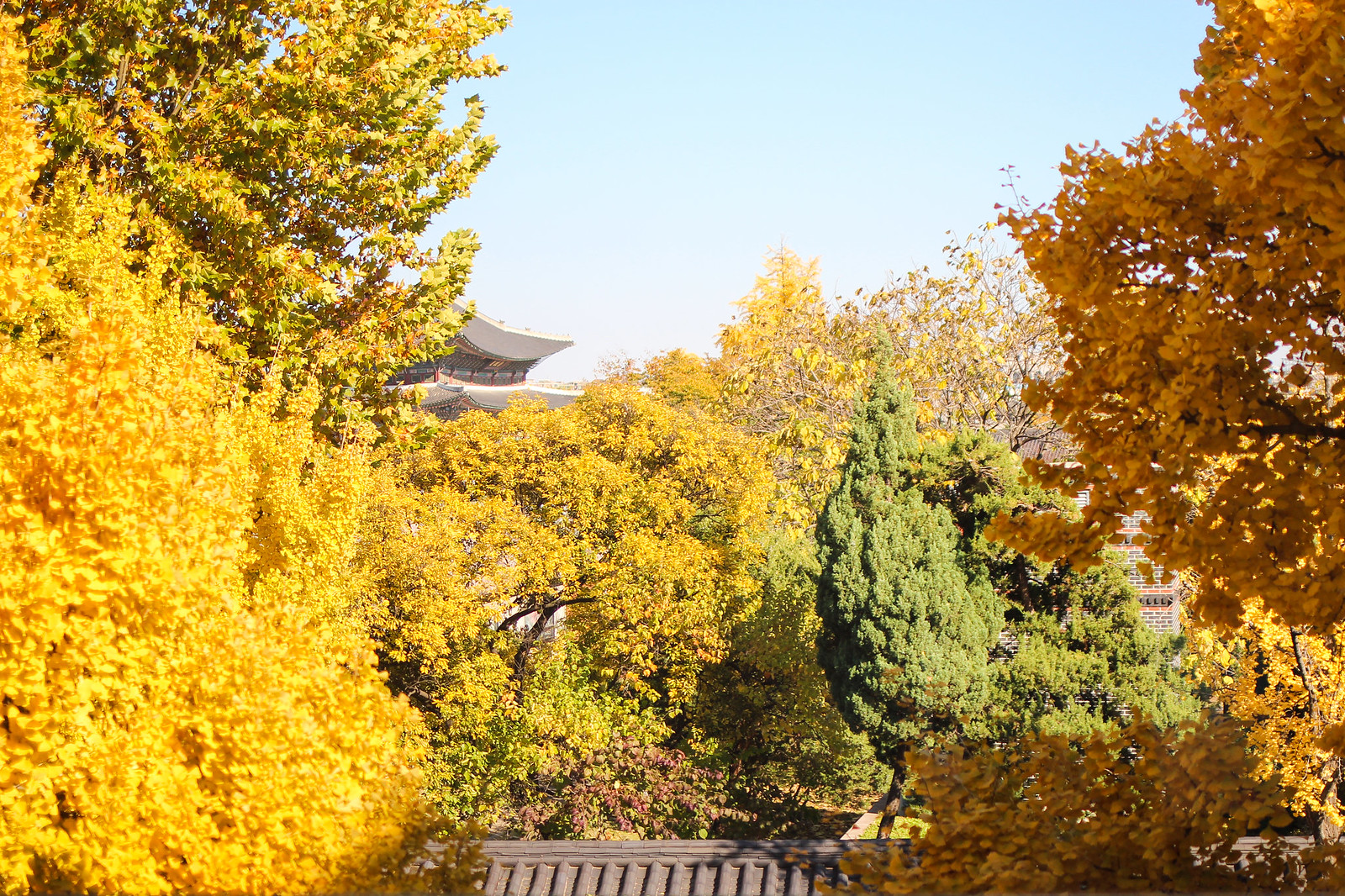 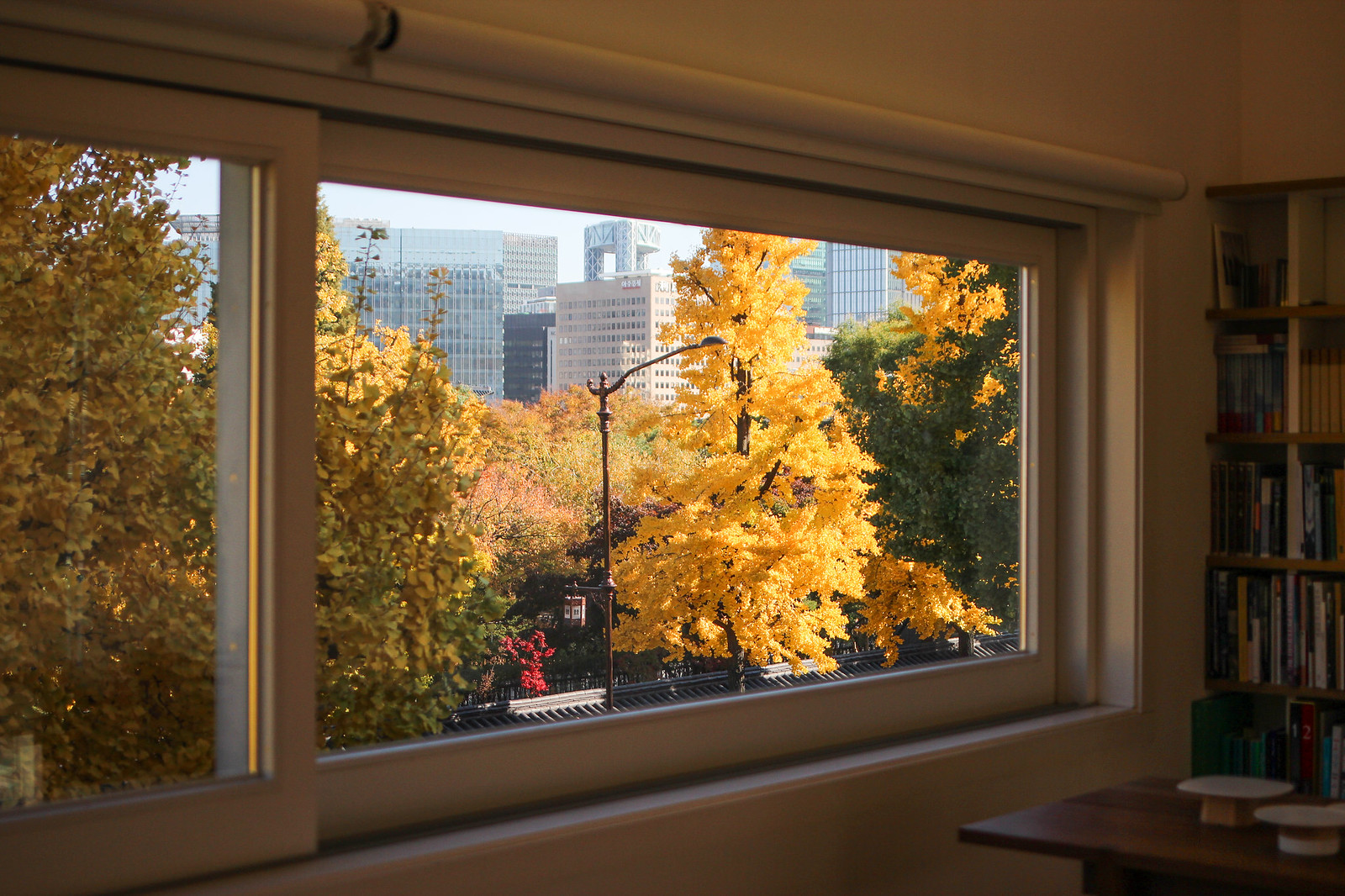 Oh, the classic spot that I just couldn’t leave out of this post, no matter how well-known it already is. There are many spots to admire the fall foliage in the Gyeongbokgung premises and the surrounding neighborhoods, but one of my favorites is that along Hyoja-ro. Running along the West Wall of the Gyeongbokgung Palace, the road is methodically planted with gingko trees which turn bright yellow in autumn, and runs through a few neighborhoods like Hyoja-dong, Changseong-dong and Tongui-dong. Compared to the grounds of the palace and the very touristy neighborhoods on the East of the palace (where Bukchon and Samcheong-dong are), the West side is less crowded (with the exception of Tosokchon Samgyetang) and allows you to take in the foliage in a more tranquil manner.

On the other side of Hyoja-ro, you can expect to find small museums, galleries and cafes, from which you can get a view of the foliage too.