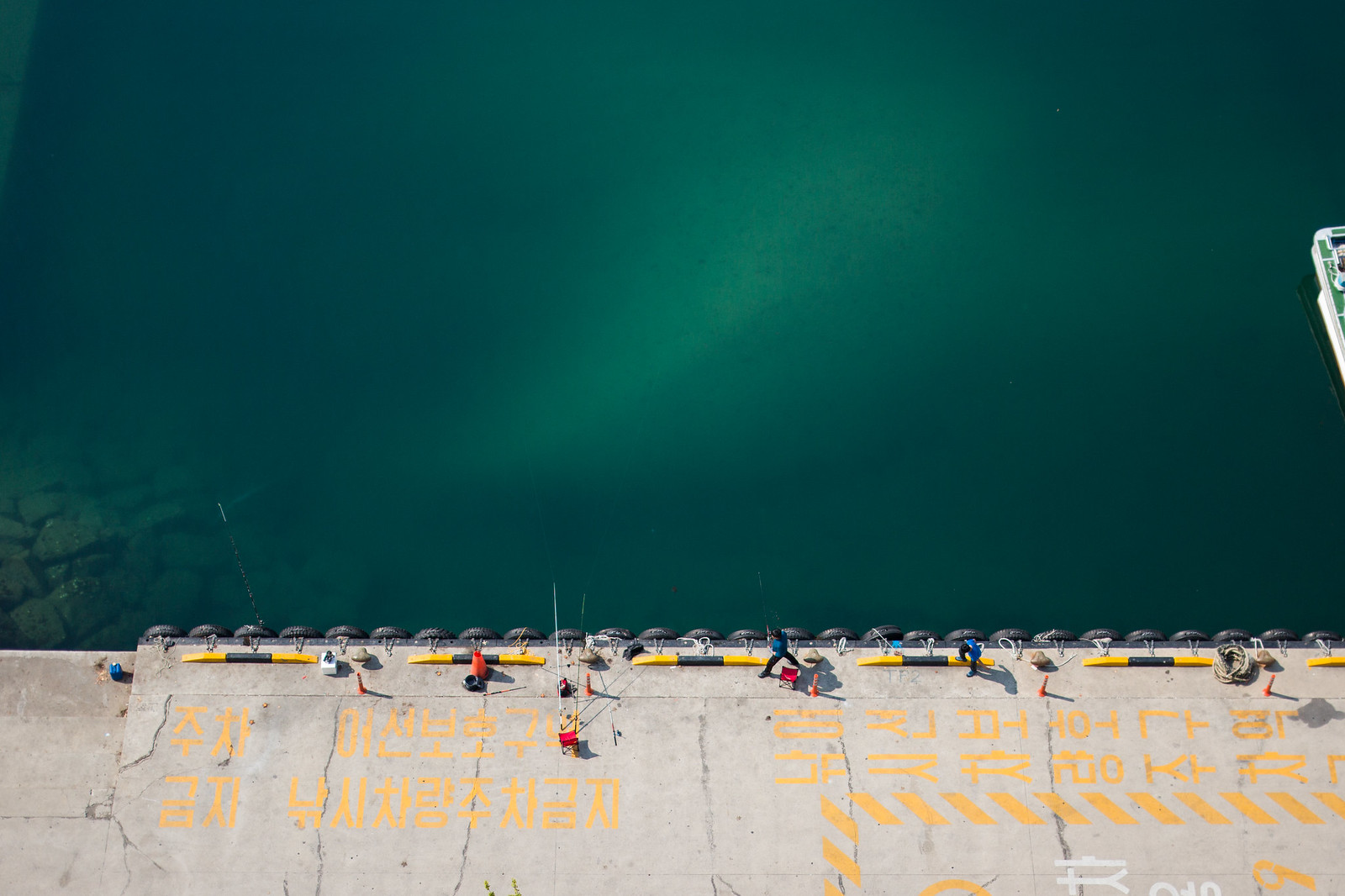 It has been close to 2 weeks of a partial lockdown in Singapore, and time has gradually freed up for me to do some writing. To mourn the cancellation of my Korea trip that would originally start in a little more than a week’s time, I am reminiscing the 2 days 1 night in Sokcho last year. One of my favorite cities in Korea till date, part of me secretly wishes for it to be kept hidden from tourists, while the other part would like to express its quaint beauty to the world.

My first time taking an express bus out of Seoul from the Express Bus Terminal, the 3-hour ride was surprisingly smooth and comfortable, with a rest stop in the middle – that is coming from someone with motion sickness. We reached the quiet coastal city just in time for a late lunch. 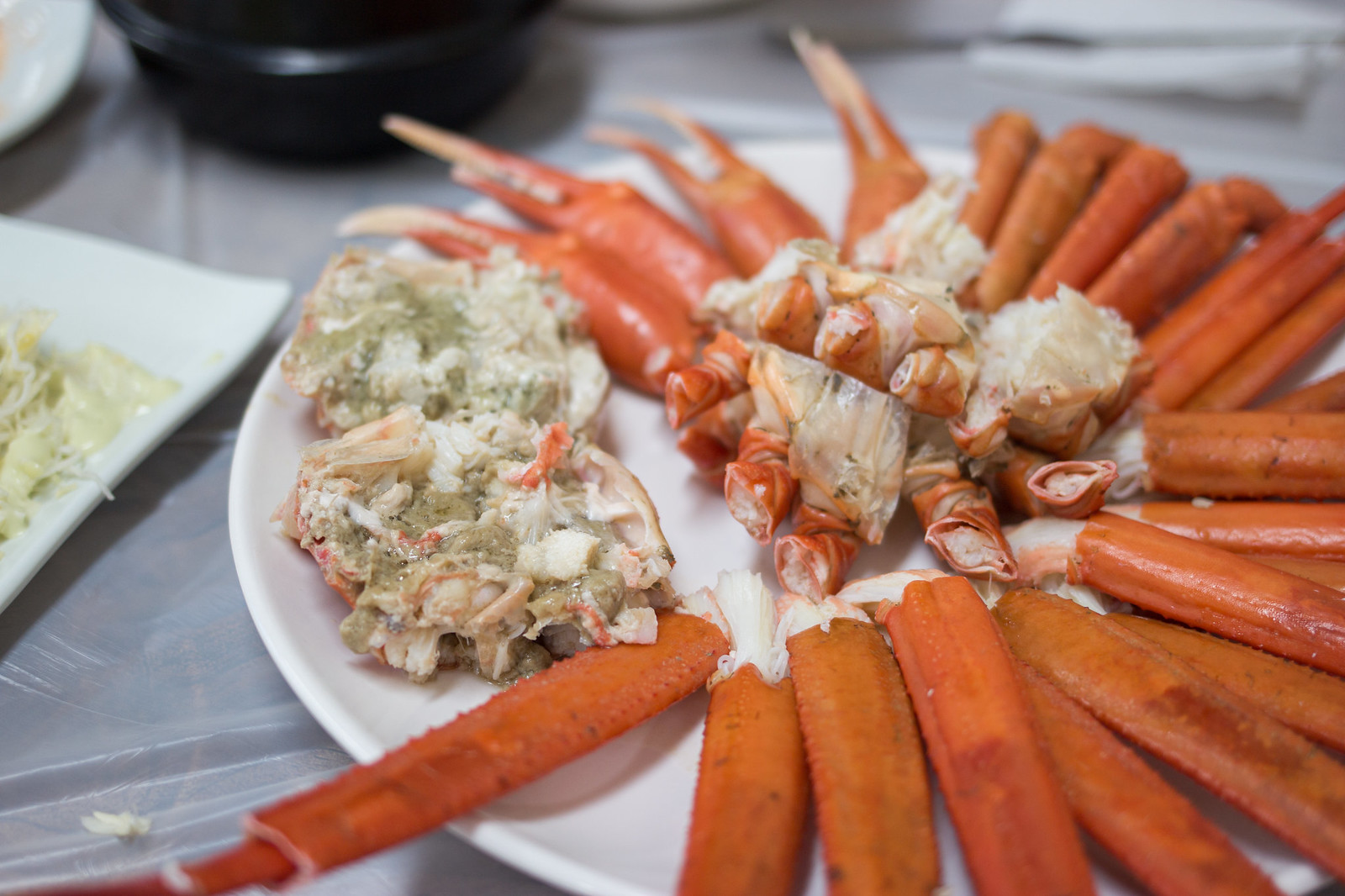 A stone’s throw away from the Sokcho Express Bus Terminal, it is a restaurant bearing a good reputation from being featured in one of celebrity chef Baek Jong-won’s TV programmes. They serve just crabs here, 3 types – the 킹크랩 (King Crab), 대게 (Snow Crab) and 홍게 (Red Snow Crab). Prices here are not cheap and there seems to be other places with better reviews for crabs, but I picked this place out of convenience.

We opted for 2 red snow crabs (70,000KRW), which are a delicacy caught in the East Sea of Korea, right off the coast of Sokcho. Ahjumma also taught us how to eat the crab legs conveniently. 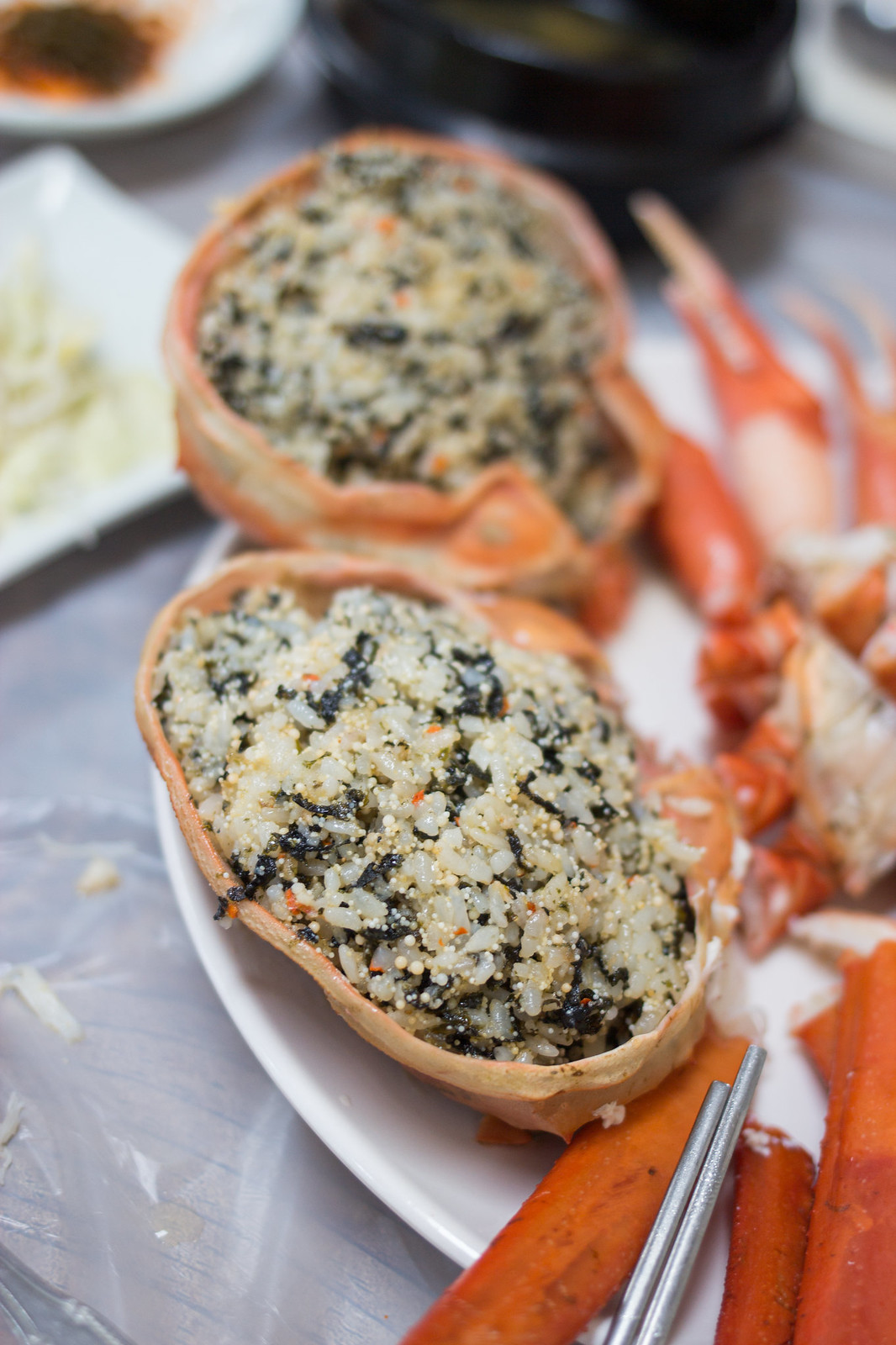 Don’t end the crab feast without ordering 게장밥 (Fried Crab Roe Rice, KRW2000 each). Generously fried with bits of crab roe and stuffed into a shell, this was a mouth orgasm.

We ended up paying about 35,000KRW per pax, which is still considered value-for-money compared to Singapore. 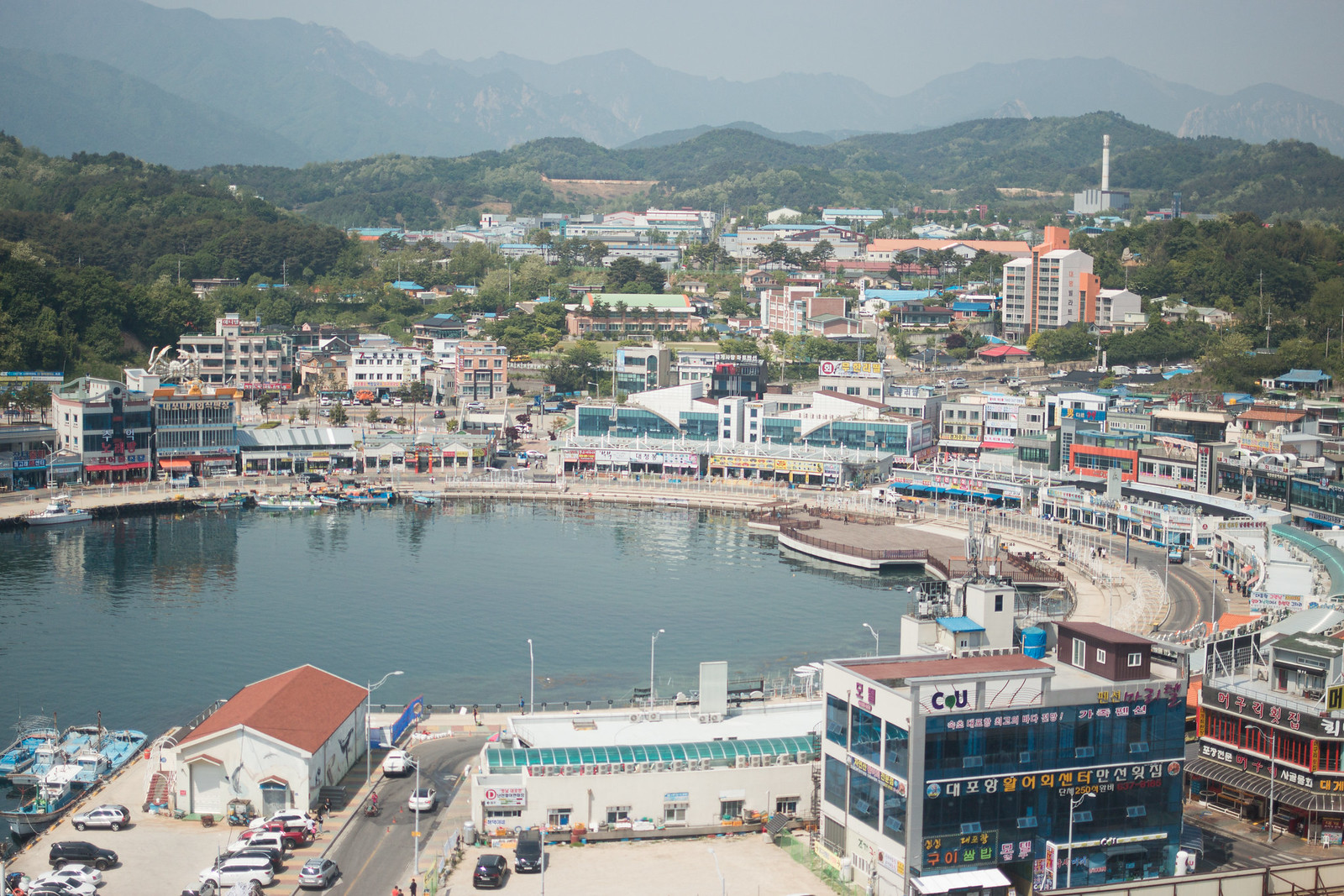 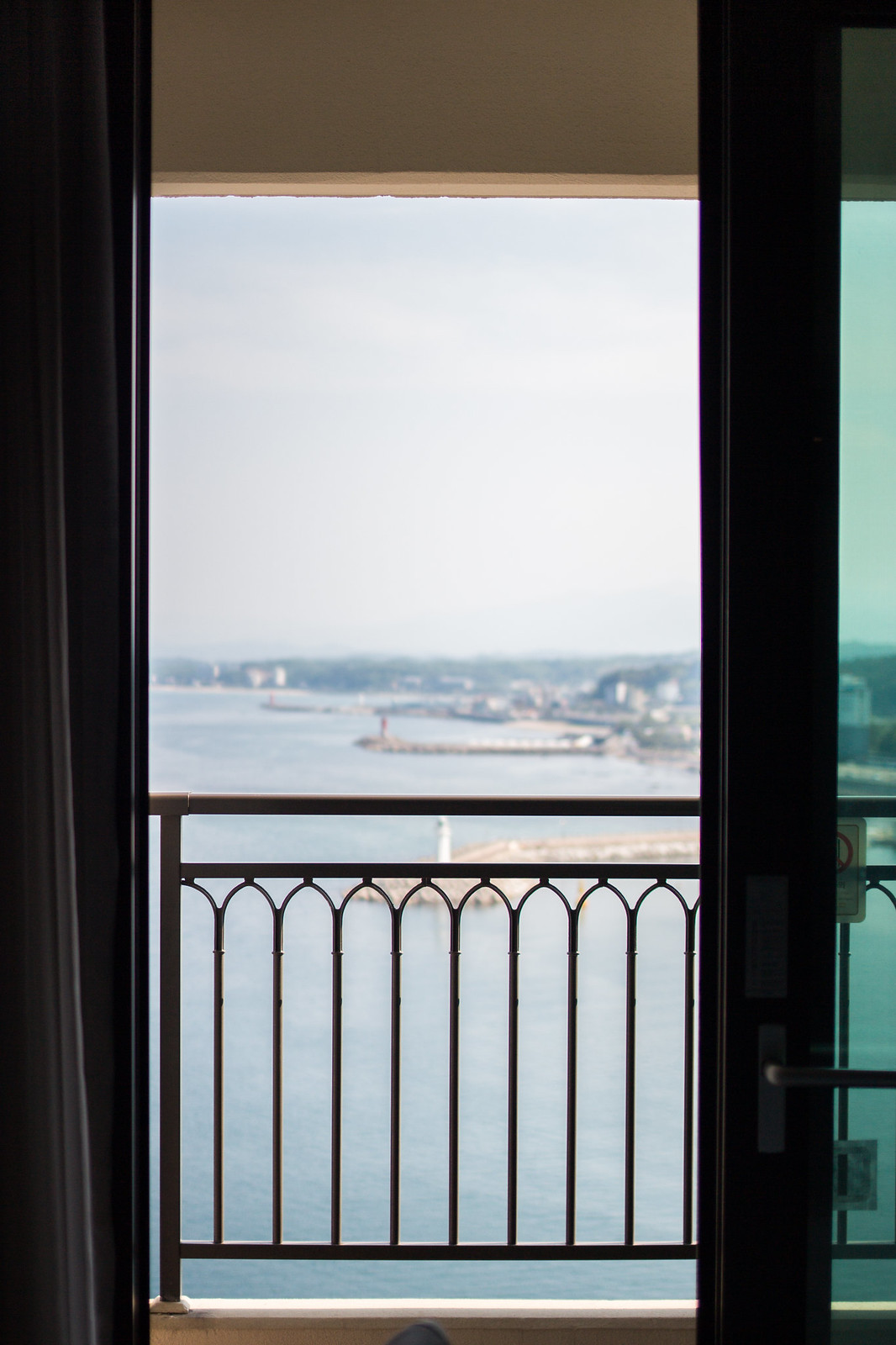 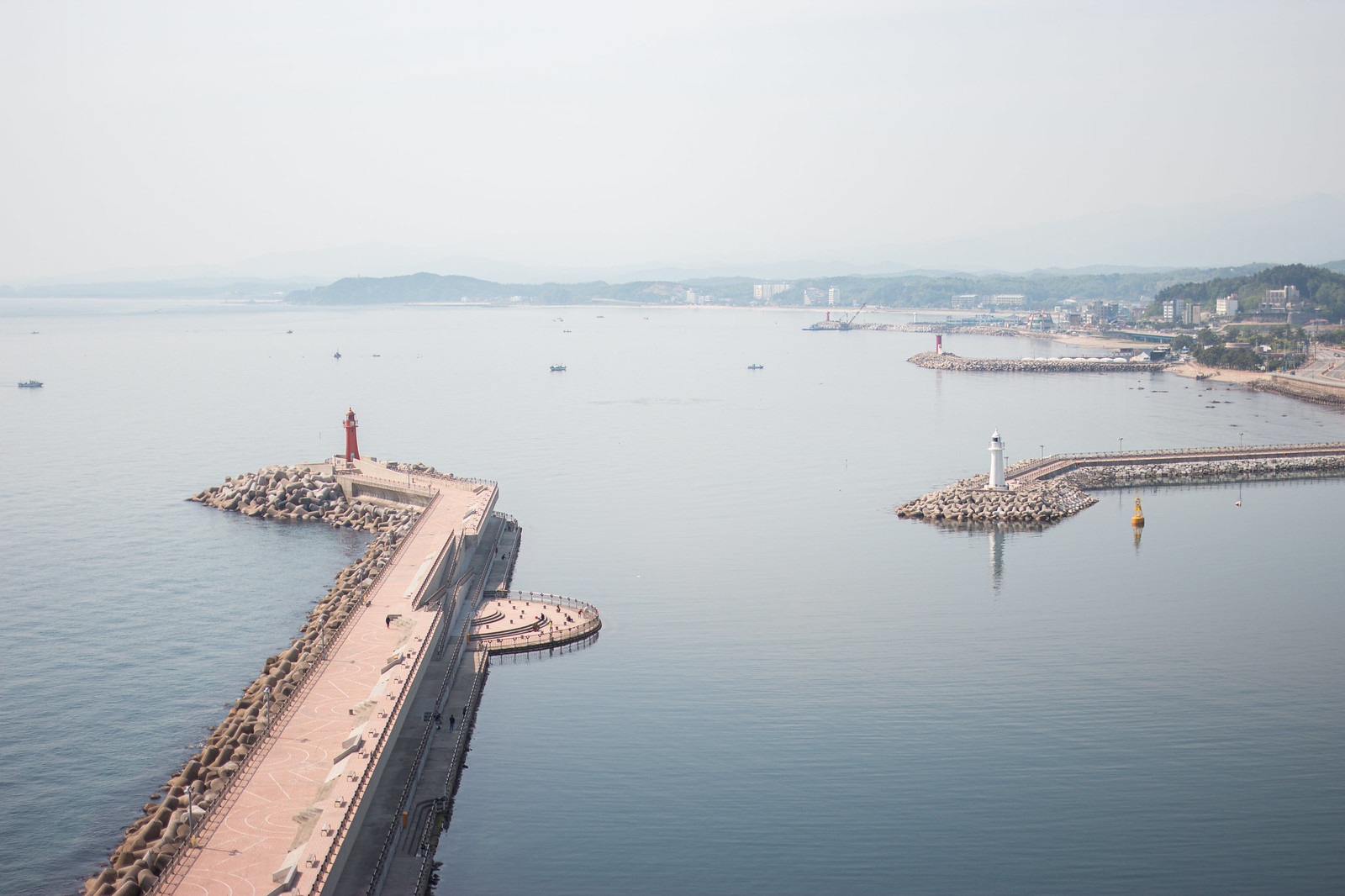 Our one-night accommodation was right next to 대포항 (Daepo Port), where a fish market and fresh seafood restaurants lined the circumference of the port. Apart from the scenic view of the circular port against the backdrop of the 설악산 (Seorak Mountain) from the hotel, our hotel room had a serene view overlooking the 대포항등대 (Daepo Port Lighthouse) standing in sea of sometimes aquamarine, sometimes dusty blue, depending on the light and angle. 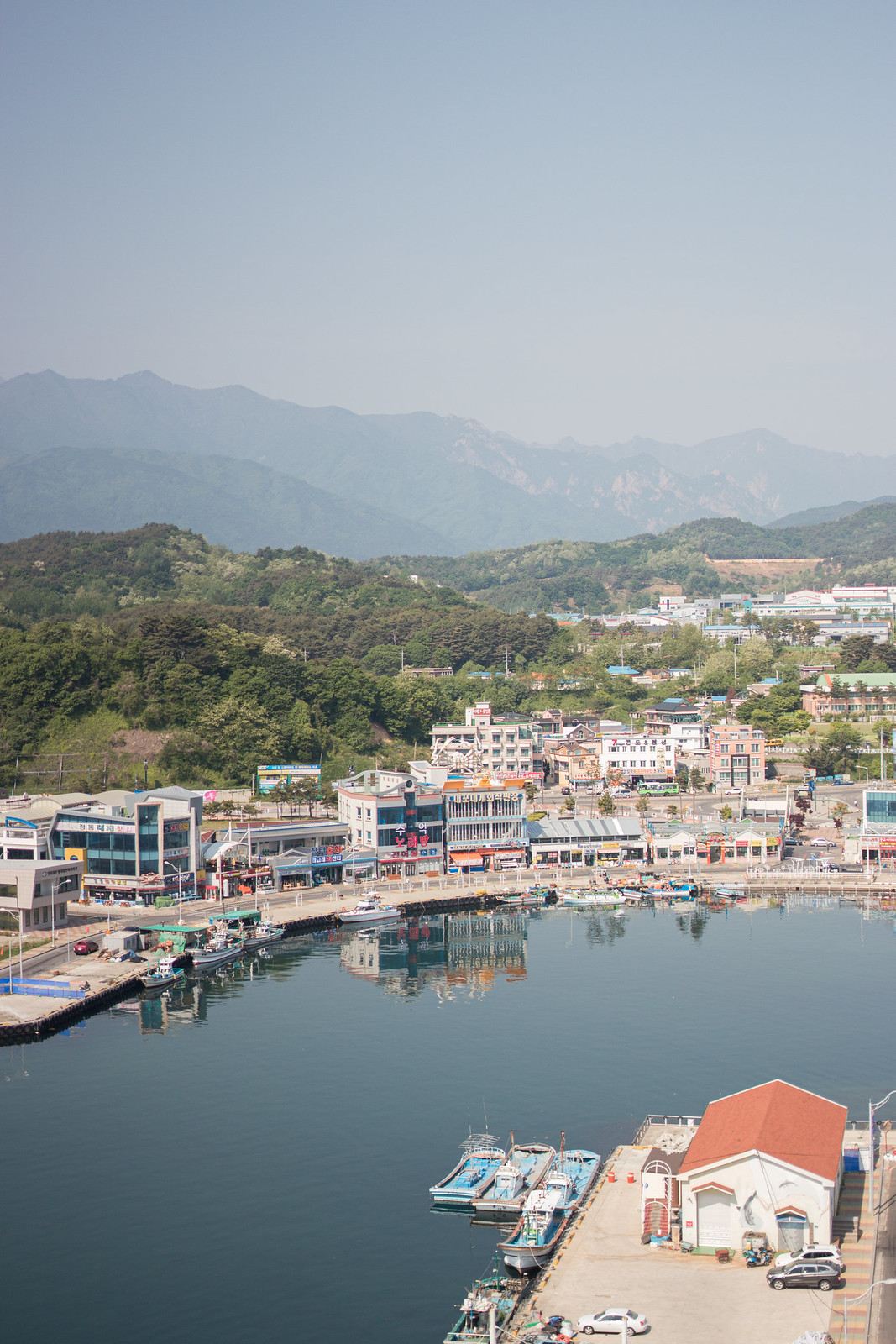 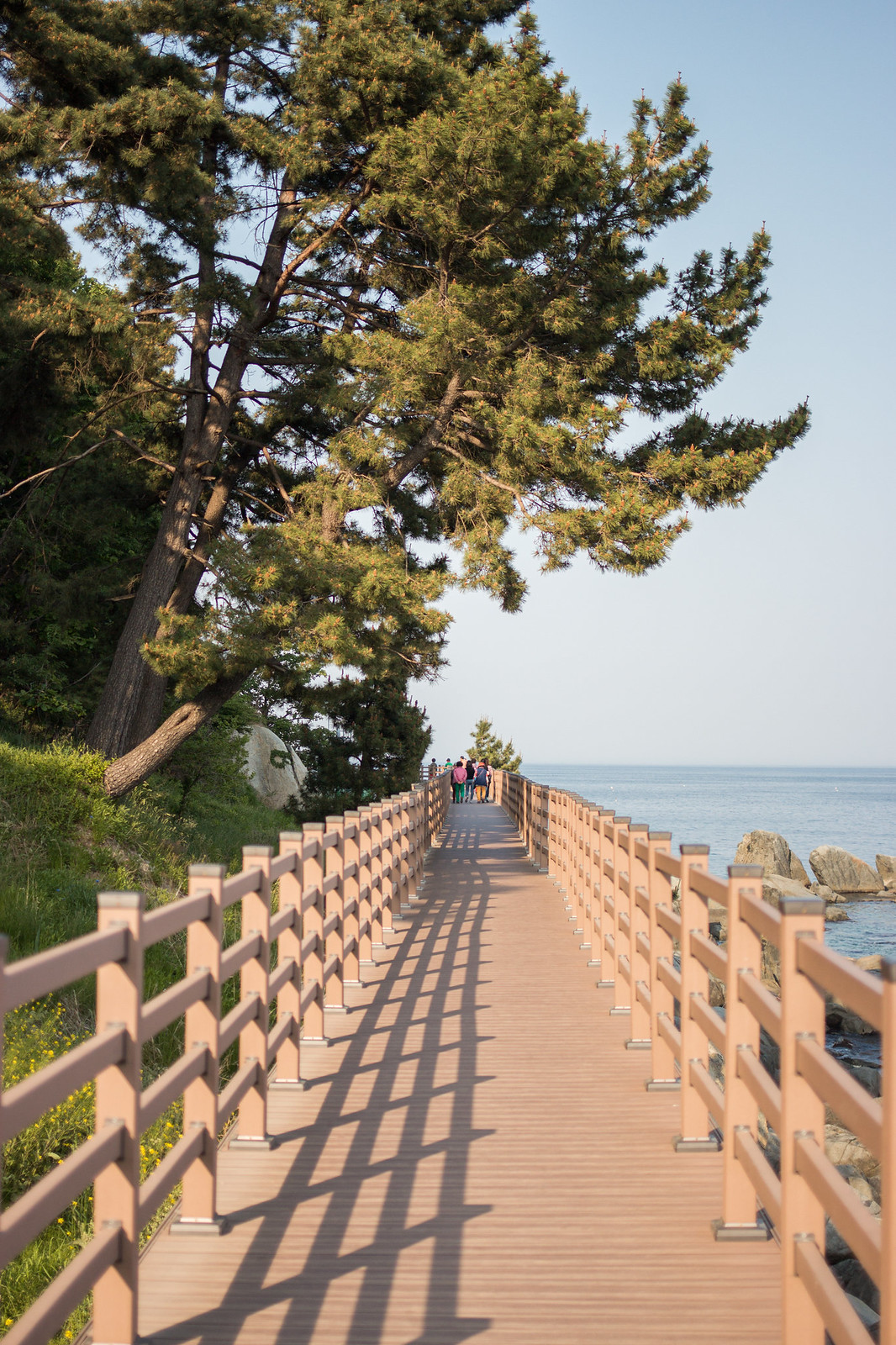 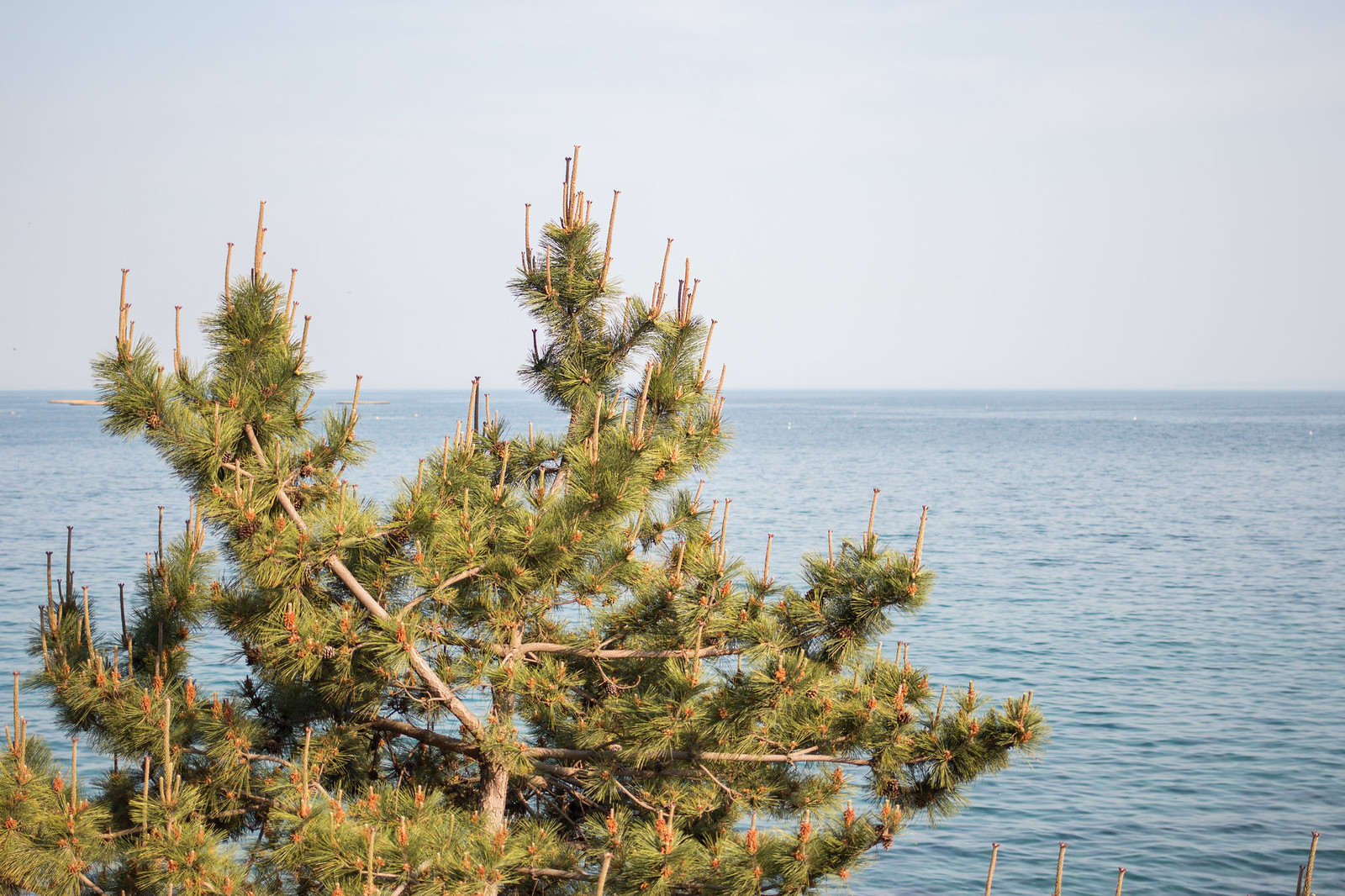 A 15 minutes’ walk from the port led to the entrance of a trail that runs along the coast, passing by the grandiose Lotte Resort, then along 외옹치해변(Oeongchi Beach) until it connects to 속초해변(Sokcho Beach). With the right weather, the trail makes for a relaxing stroll. 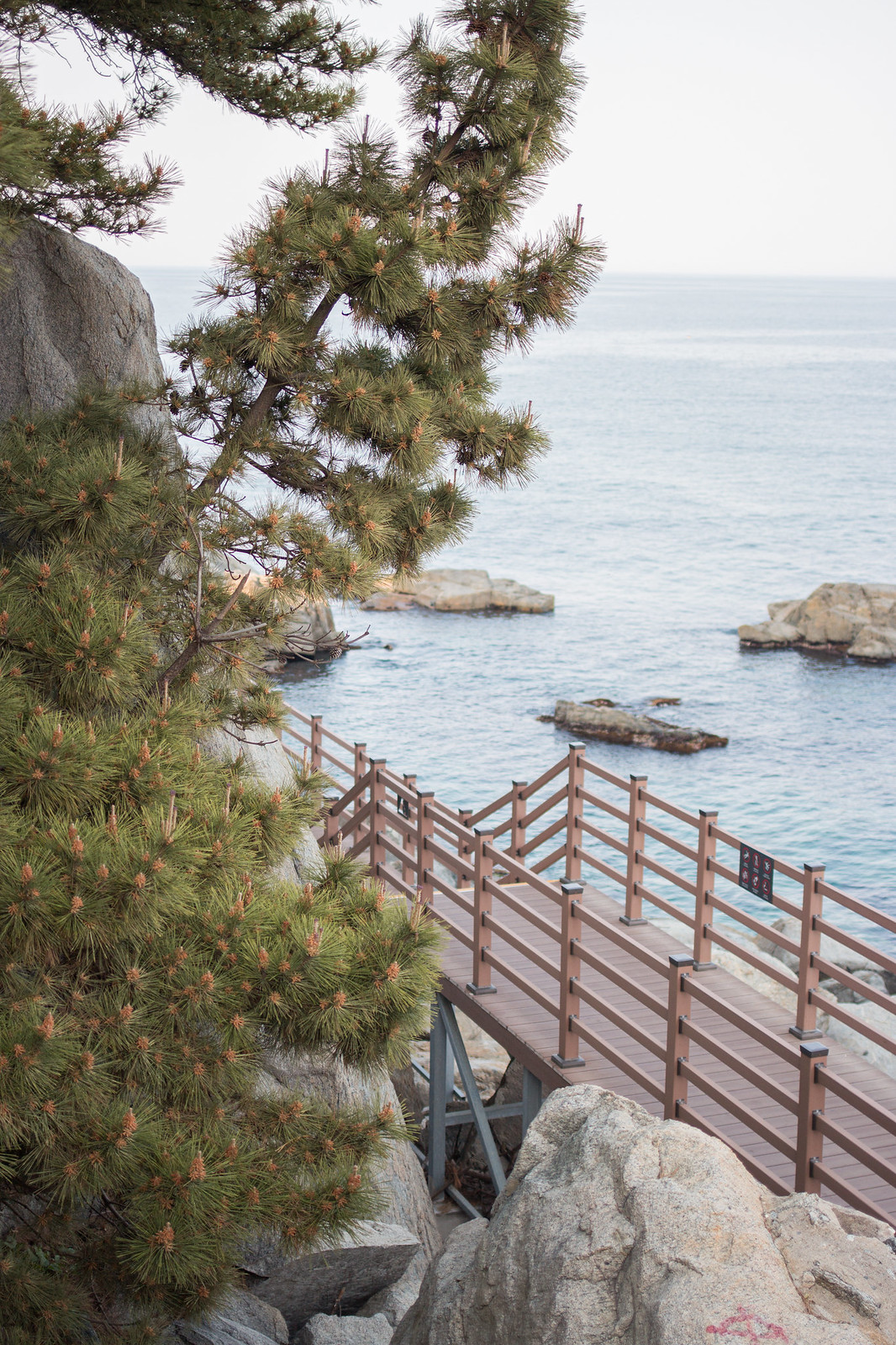 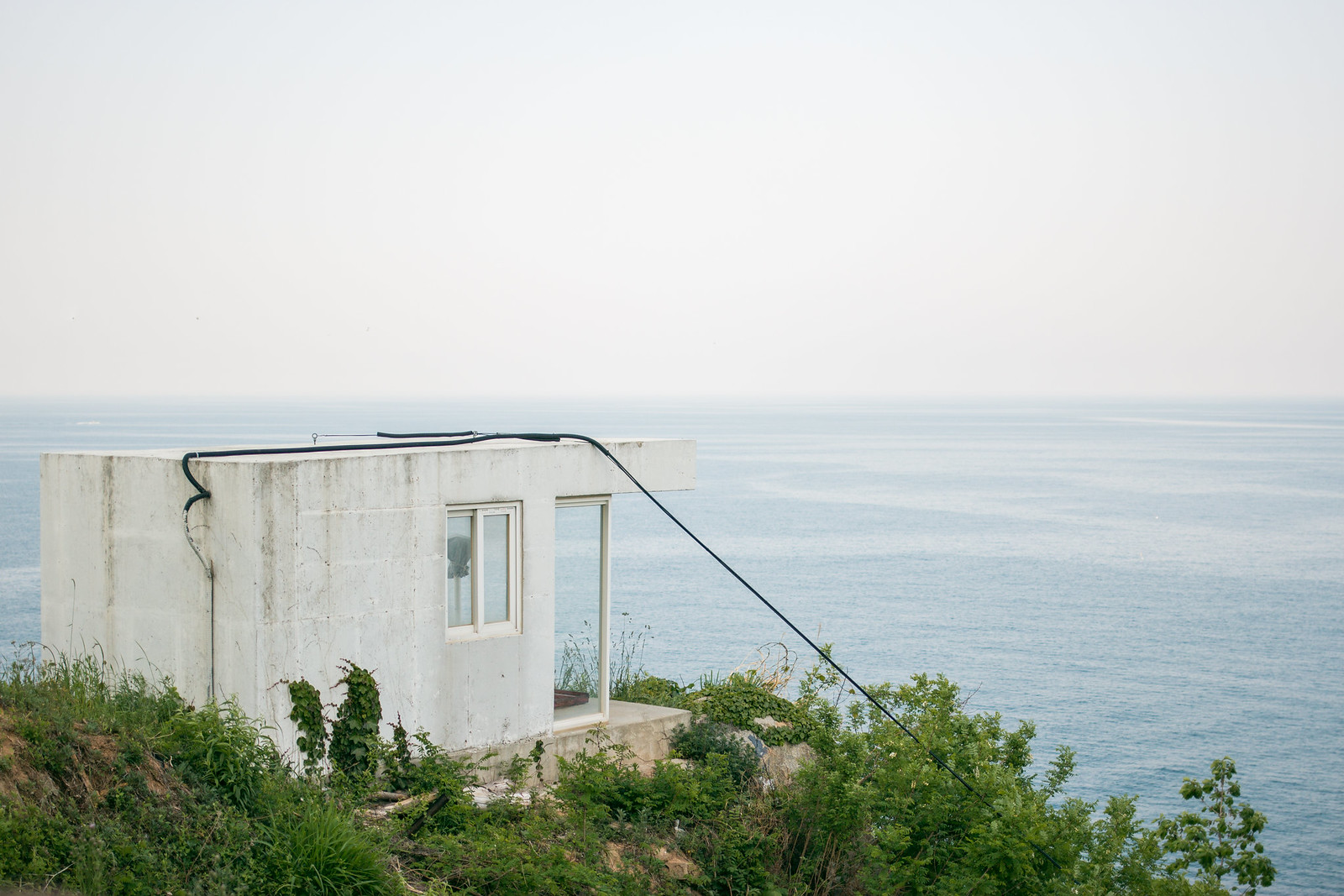 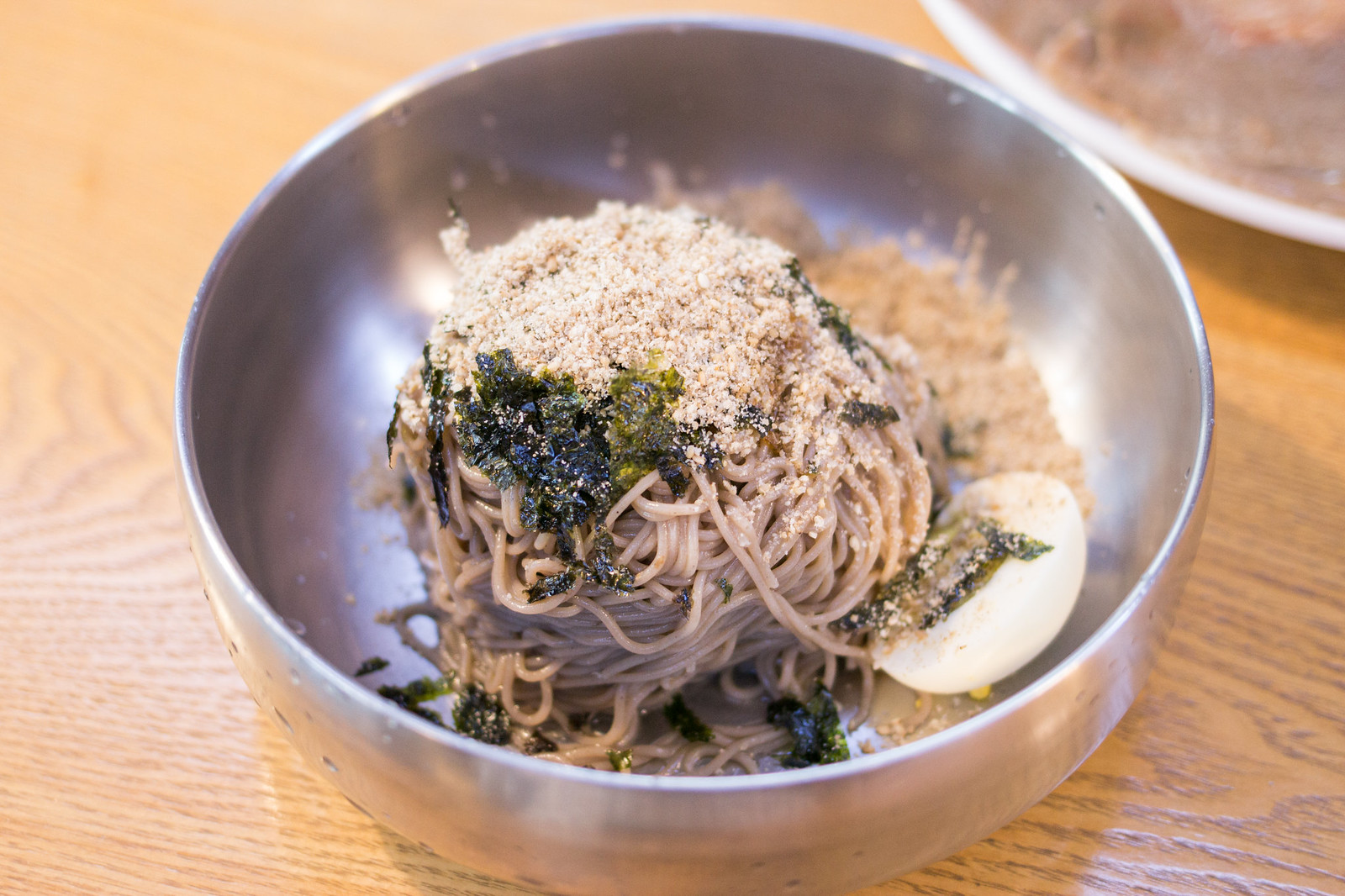 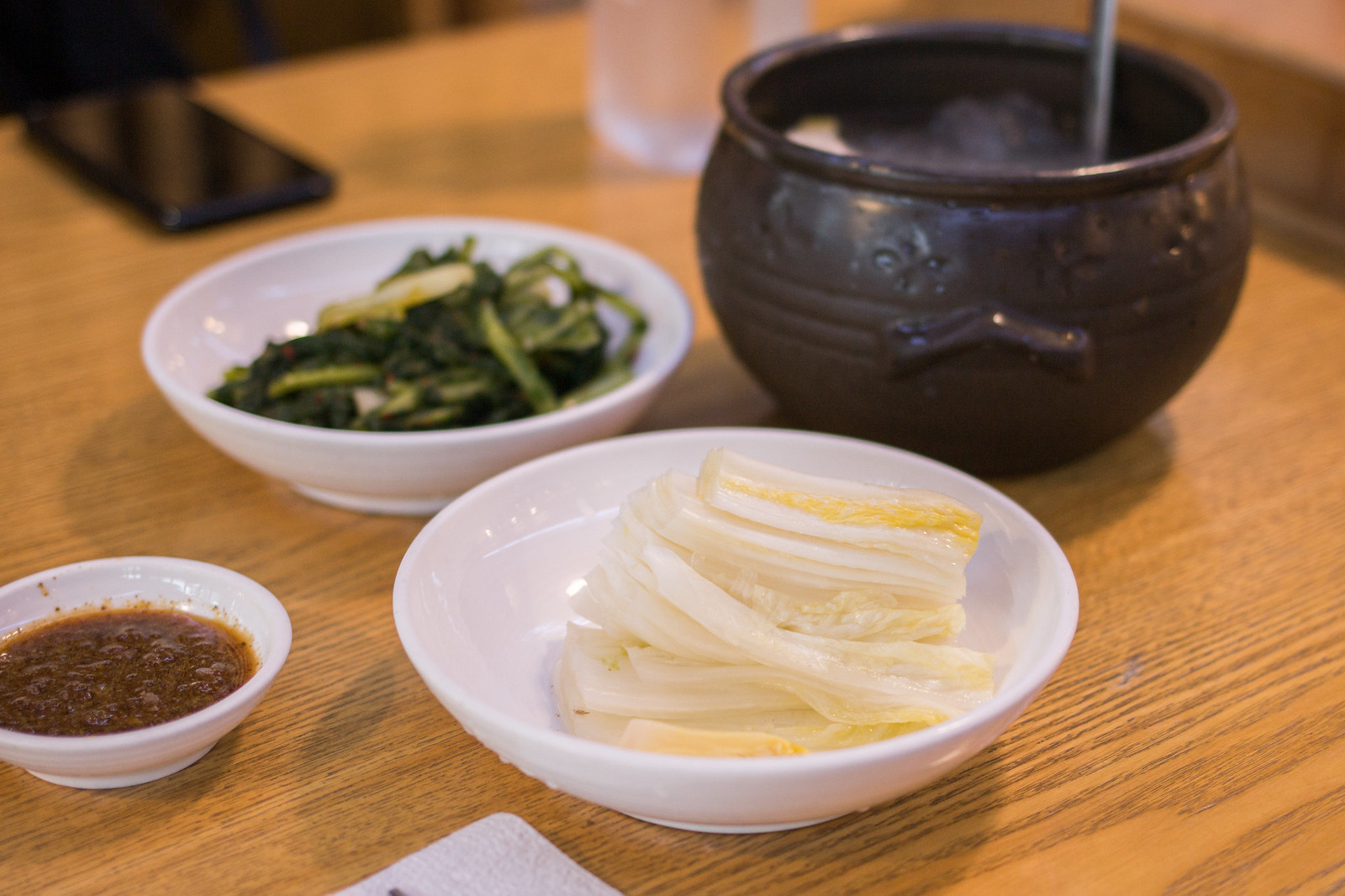 From the heart of Sokcho Beach, our dinner venue was a short bus ride away. It was our first time trying Makguksu, a cold noodle dish made with a high concentration of buckwheat and a specialty of the Gangwon Province. The signature of this restaurant is its 동치미 막국수(Dongchimi Makguksu, 8,000KRW) – a bowl of makguksu served along with a pot of dongchimi, or radish water kimchi. Together with the dongchimi, the bowl of noodles was extremely refreshing. 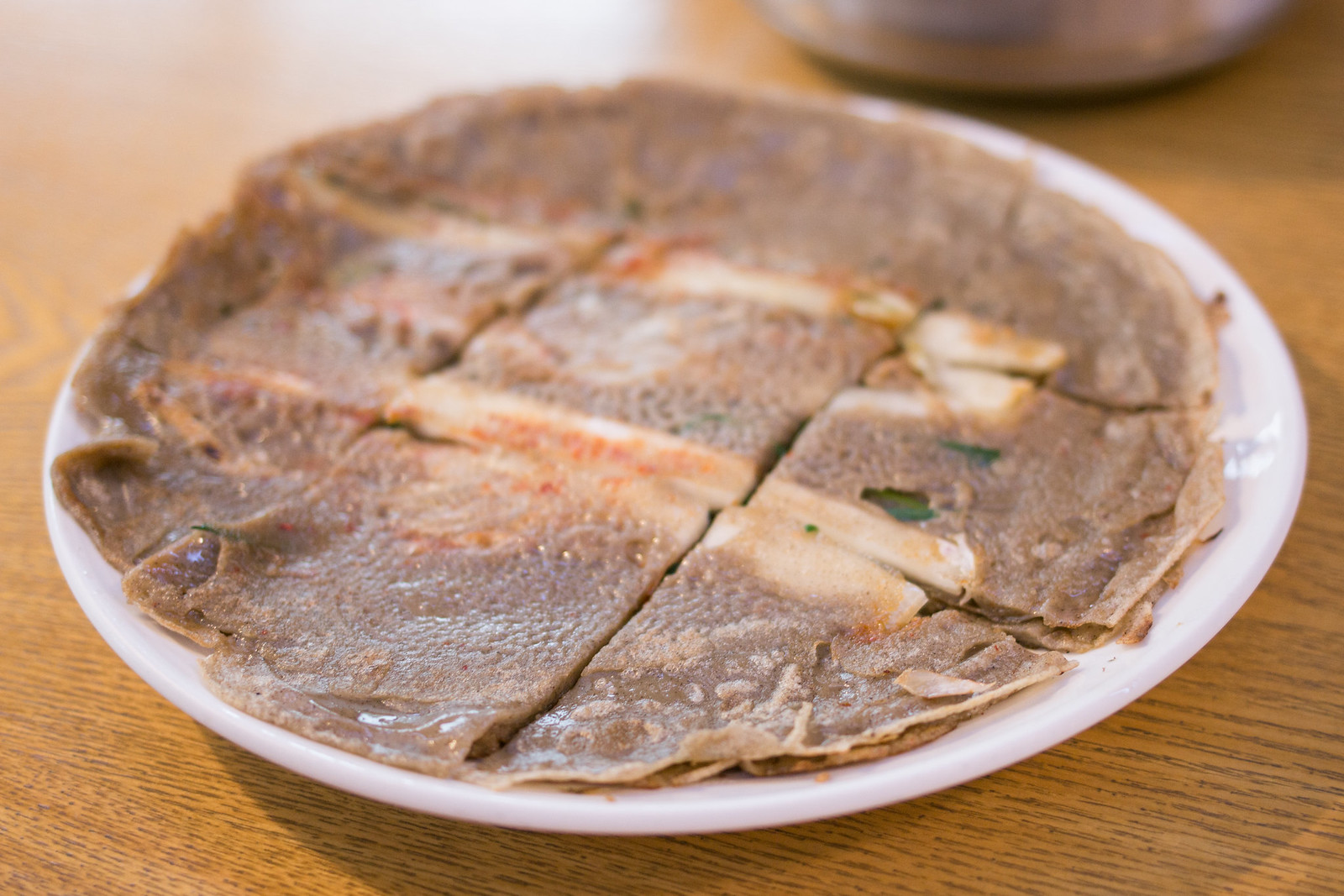 On the side, we had 메밀전 (Buckwheat Pancakes, 8,000KRW), which were savory, earthy and nutty at the same time. 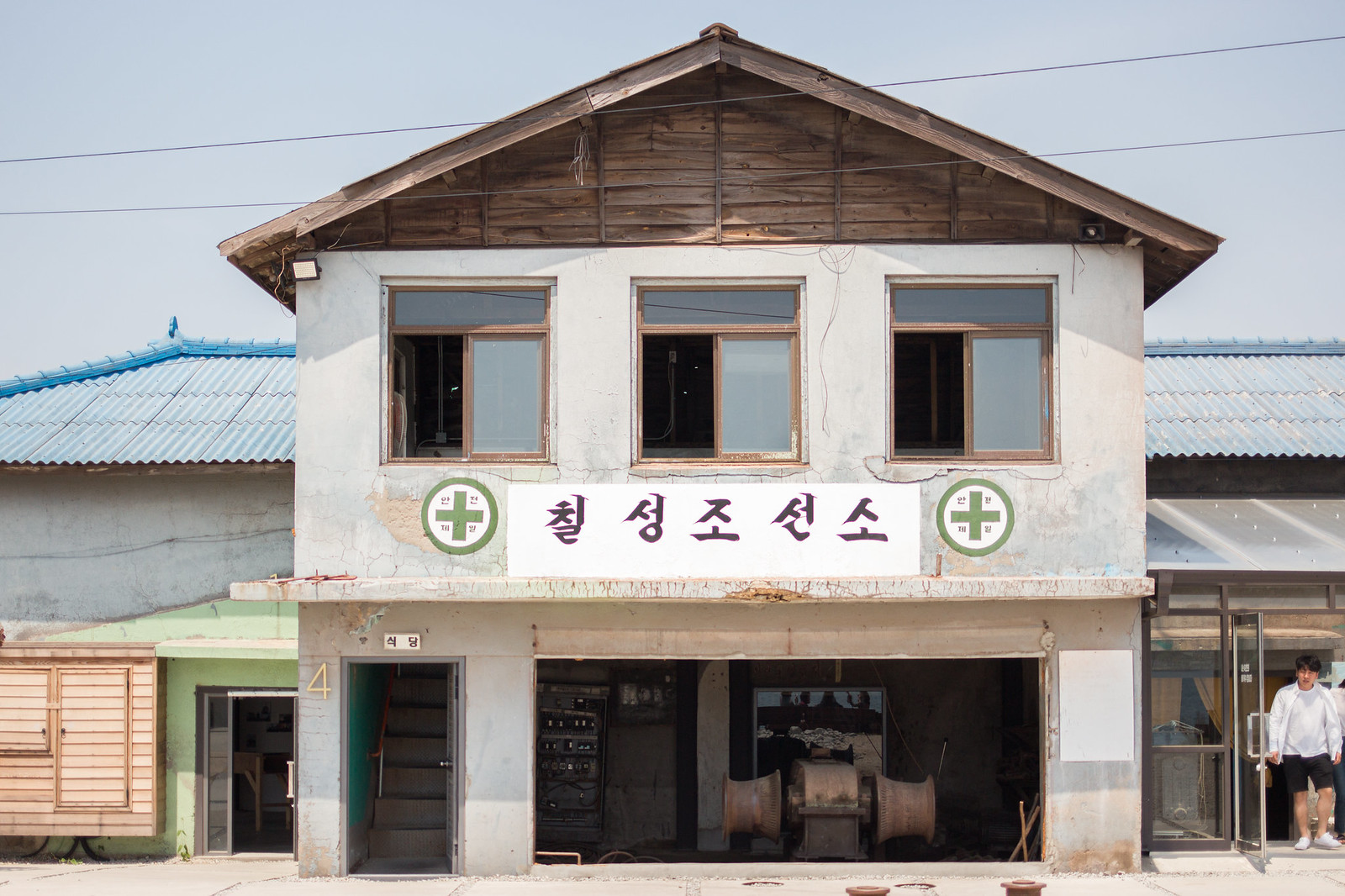 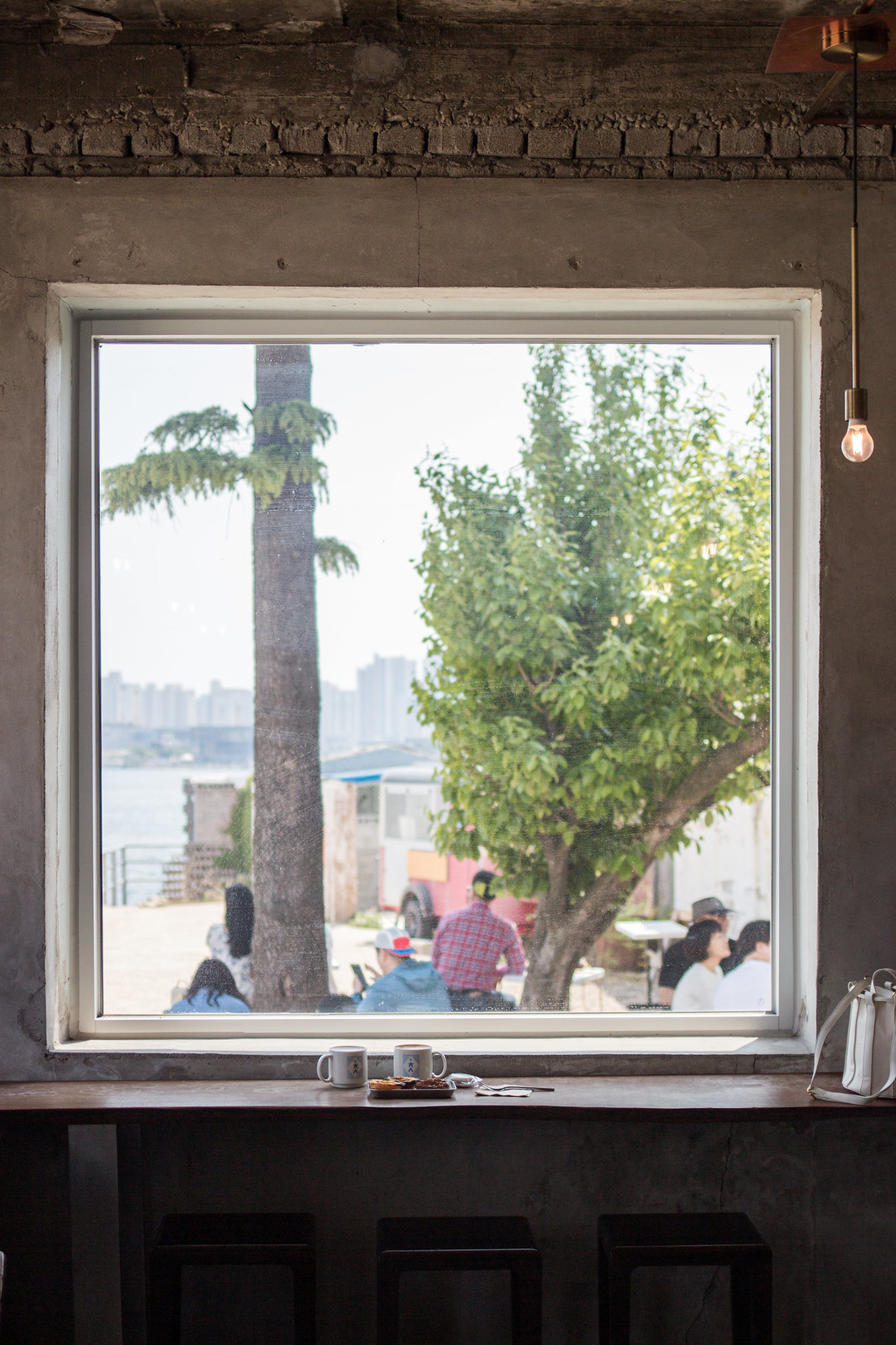 Next morning, we had breakfast at possibly the most popular café in Sokcho. This café was indeed a shipyard right up till recent years, thus explaining not just its name but its raw structure. The complex is vast, with a gallery displaying the shipbuilding that once took place in the same space, an indoor café and outdoor sitting areas overlooking the 청초호(Cheongchoho Lake). 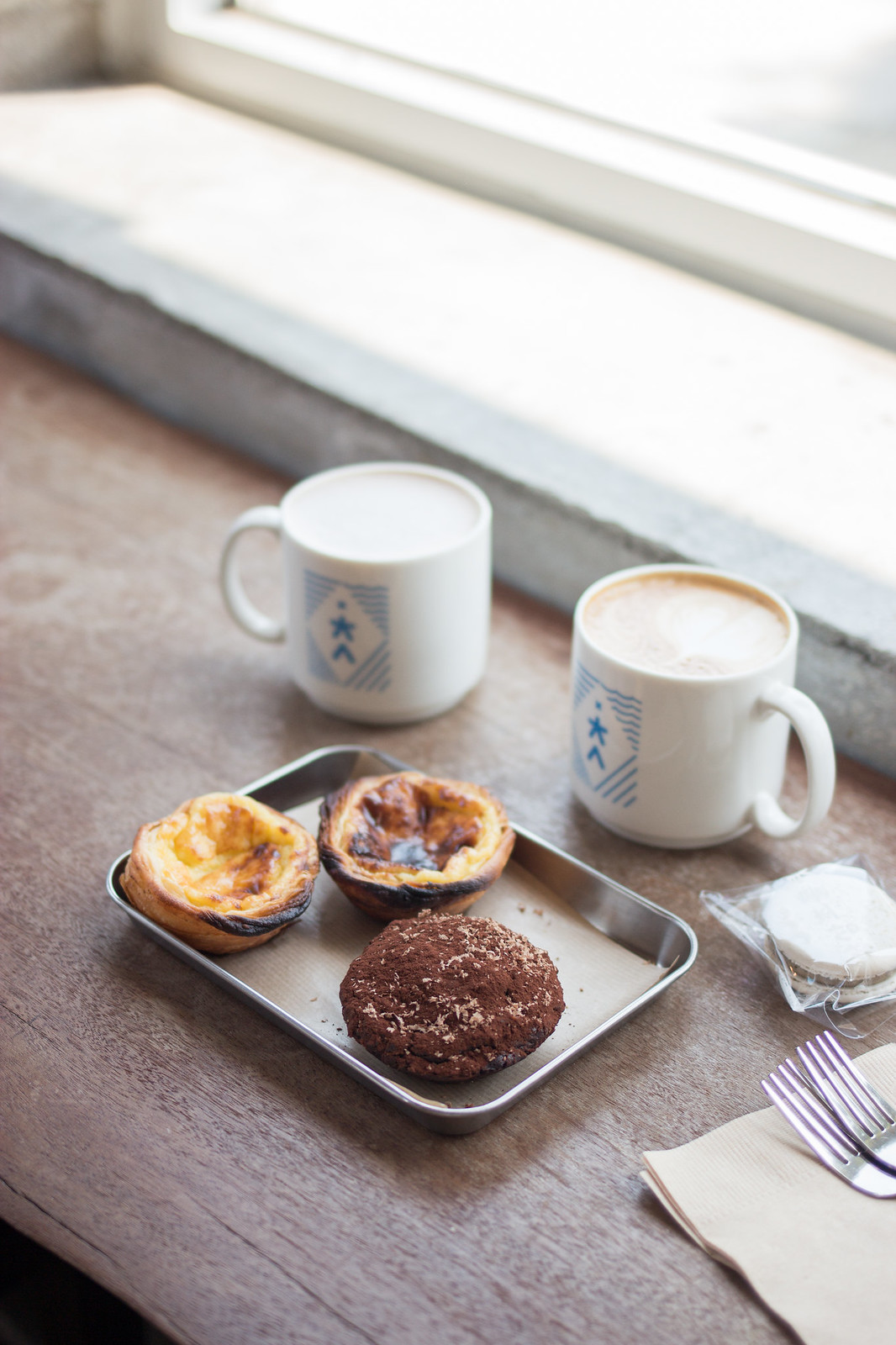 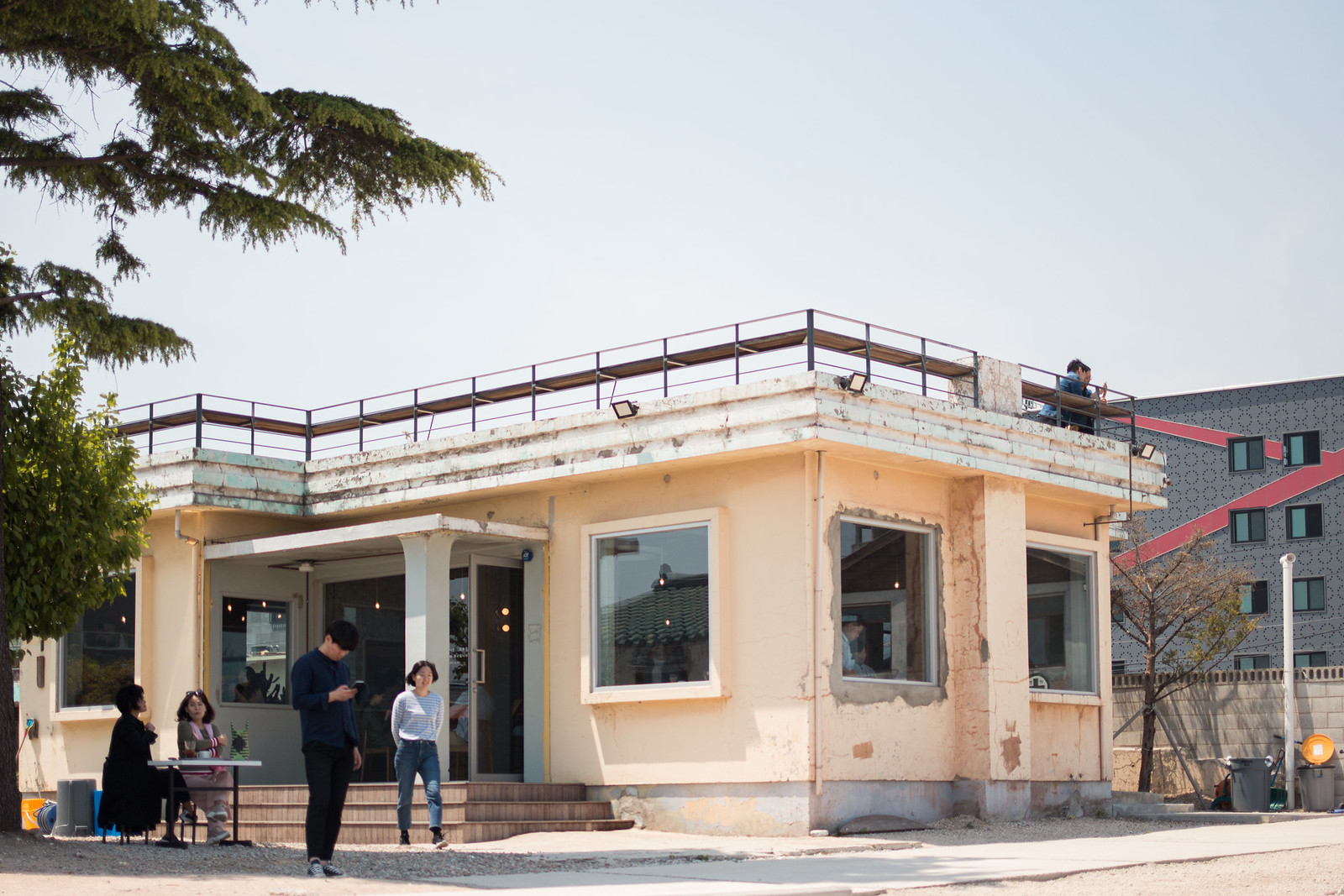 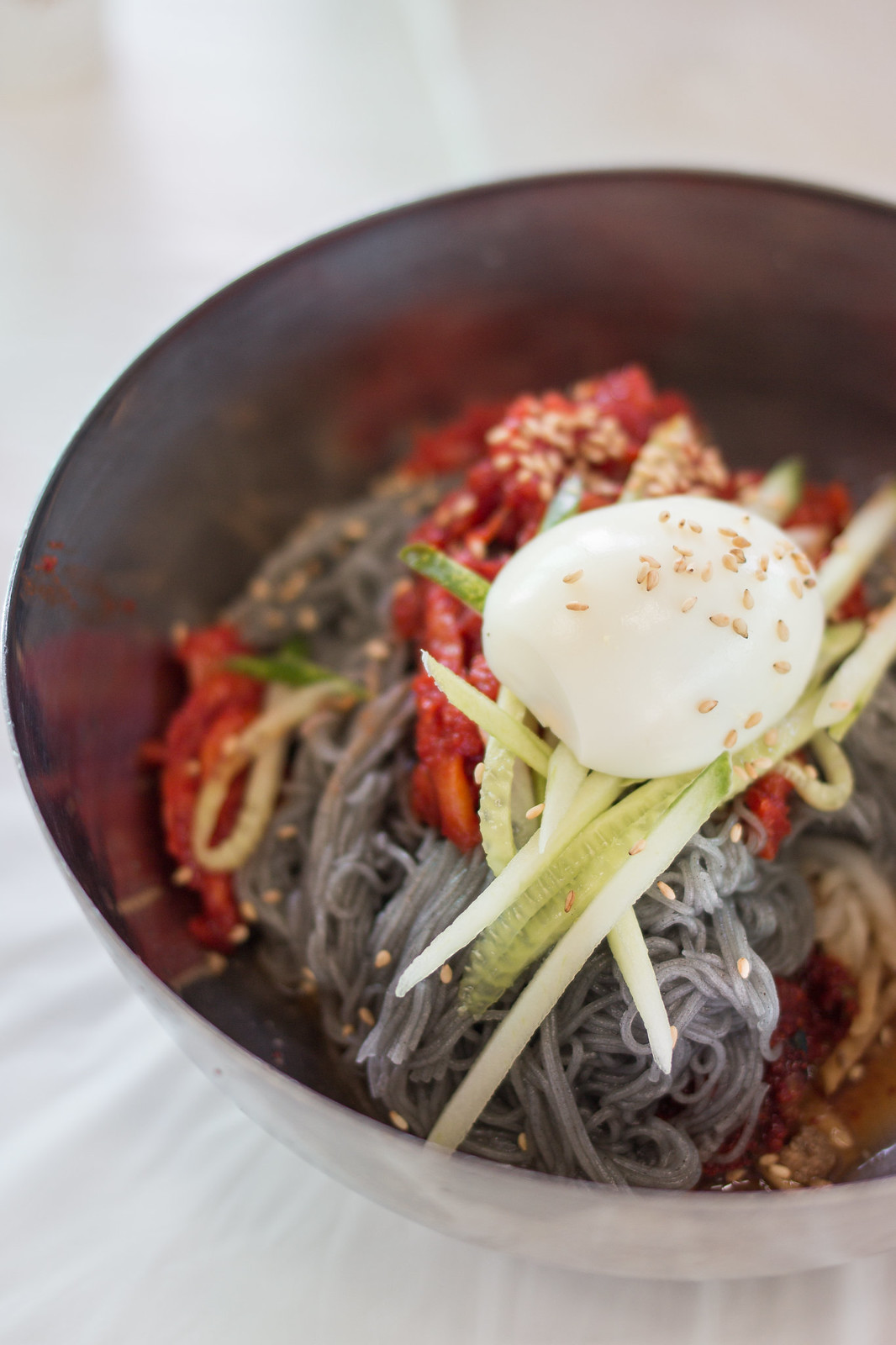 After noon, we headed to this village which has a historical story of its own from the days of the Korean War. Without prior research on places to dine in this area, we picked and entered a store randomly. I had the 명태회 냉면 (Naengmyeon, or cold noodles, with pollock) which had a fiery kick to it. 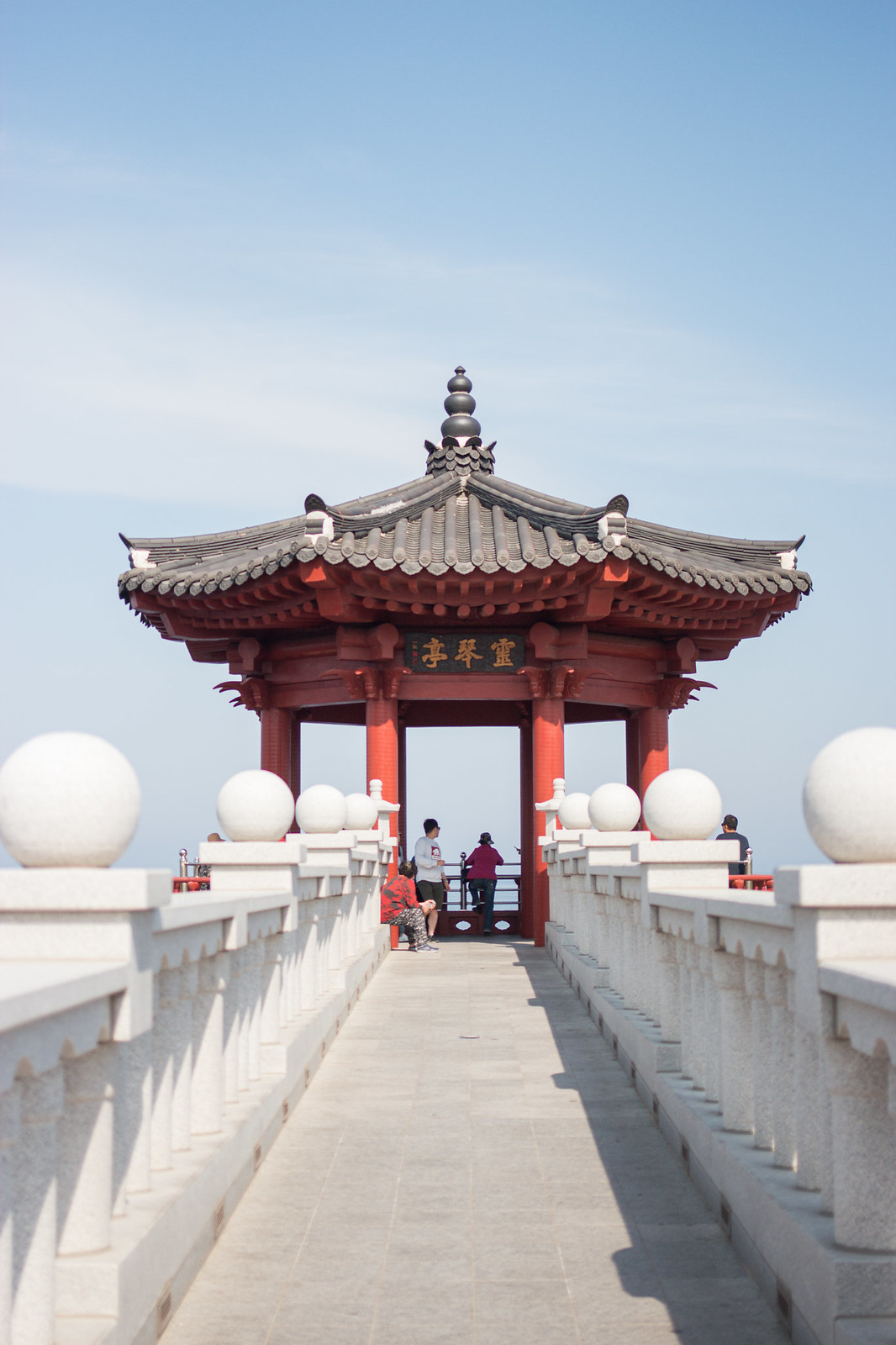 An impromptu stop, this is a traditional pavilion from which the scenery of the endless East Sea calms you right to the bones. And if you have extra time, there is the 속초등대전망대 (Sokcho Lighthouse Observatory) nearby too. 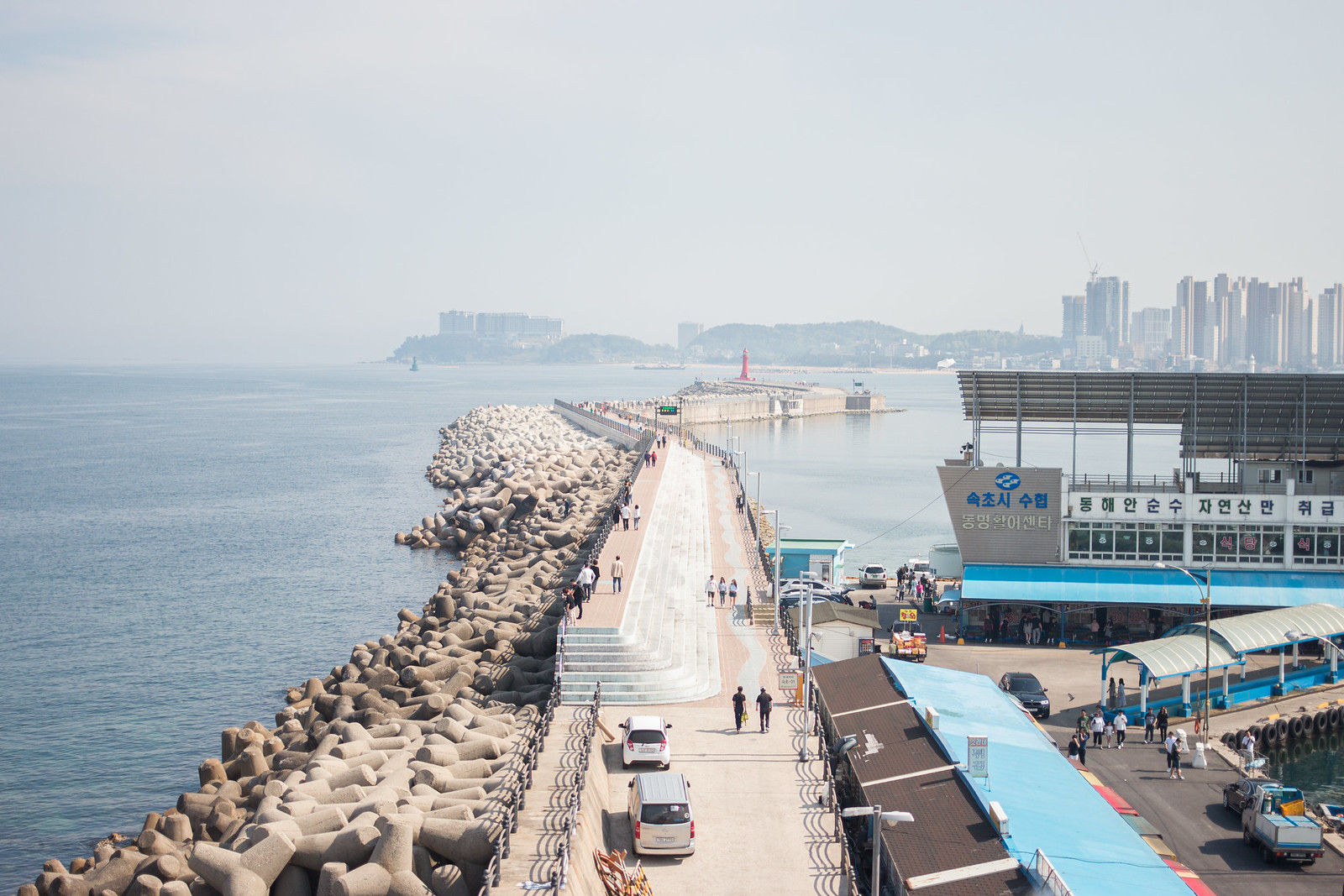 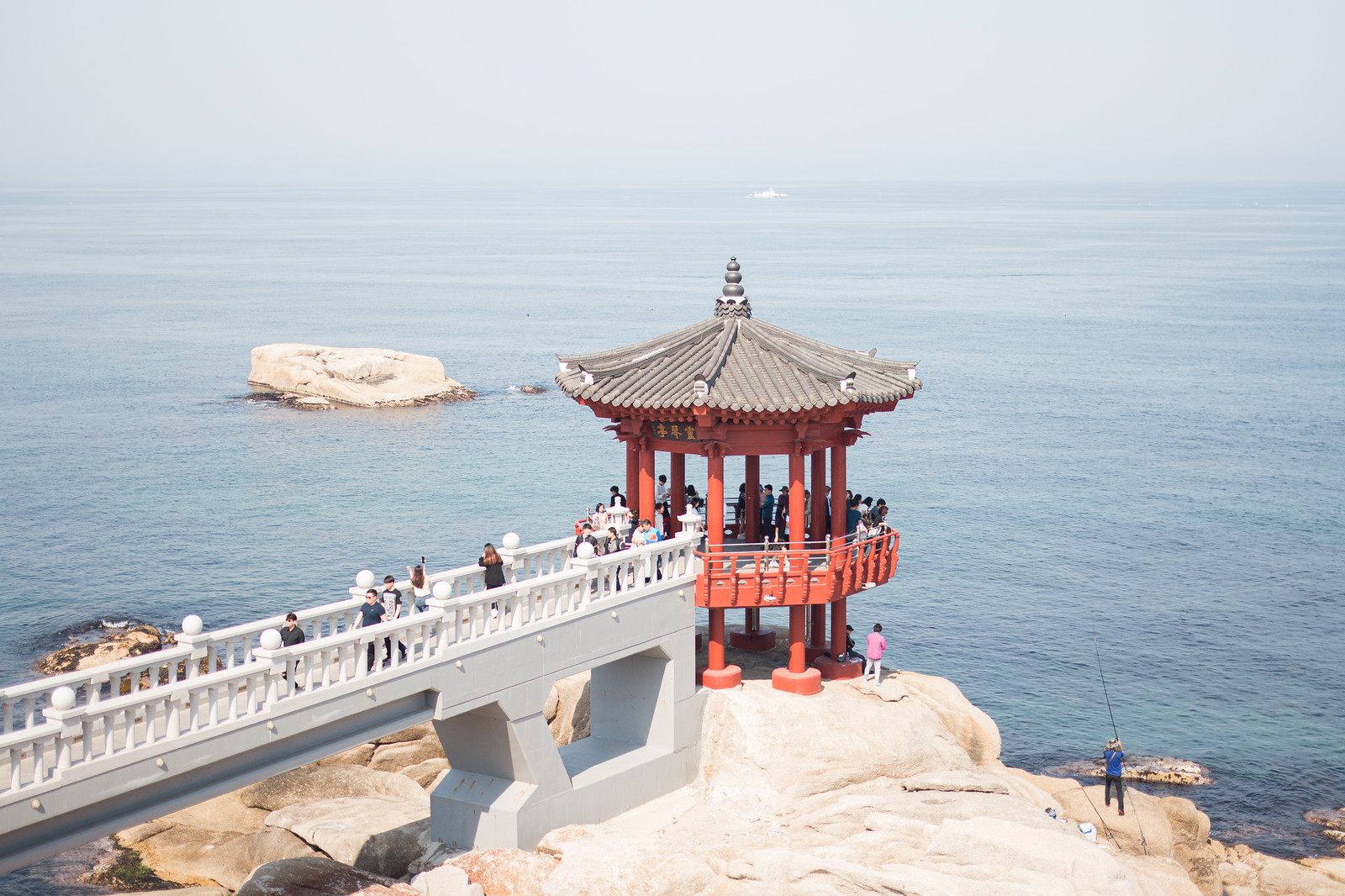 Right before the journey back to Seoul, we made a quick pit stop at the 속초관광수산시장Sokcho Tourist & Fishery Market, which is not shown here as the lively throng of the crowd filling the main aisle of the market made it quite impossible for photo-taking. There, we tried a bit of  오징어 순대 (Stuffed Squid), waited in line for 술빵 (Alcohol Fermented Bread), and brought back to Seoul a box of 닭강정 (Fried Chicken in a Sweet Sauce) from the famous 만석닭강정 (Manseok Dakgangjeong).