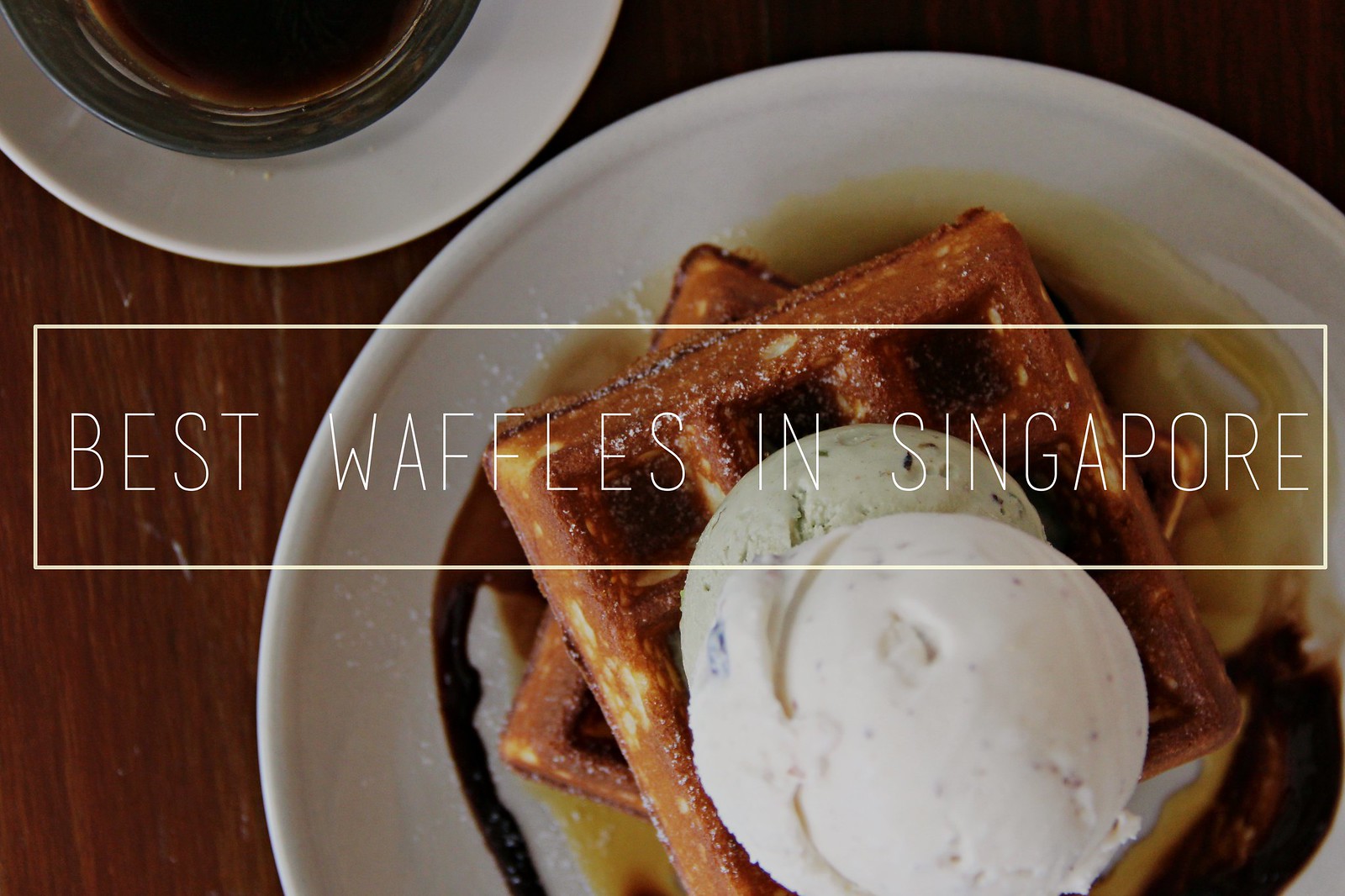 Long gone were the days of breakfast where the simplicity of toasts take the center of attention on the dining table. Things have evolved from those olden days of traditional goodness to bring about something bigger (quite literally) than before. Despite its long, lingering presence from medieval times, this quintessential dessert is back to please both young and old. Presenting to you – the fab waffle. Here is my guide to the city’s best, in no particular order whatsoever.

Predominantly a chocolate and desserts cafe, Wimbly Lu serves up waffles that are indisputably one of the best on the island. The X factor? Their waffles are crisp on the exterior and fluffy interior-wise. Accompanied with them are their homemade ice cream with flavors including chocolate truffle, honey cinnamon (must-try!) and salted caramel. Though Wimbly Lu boasts an interesting array of cakes (try the root beer cake), pies and tarts, the conventional waffle remains as the crowd’s favorite. Don’t miss this quaint spot. The waffles with a scoop of ice cream are priced at $8.50 and $3 for an additional scoop. 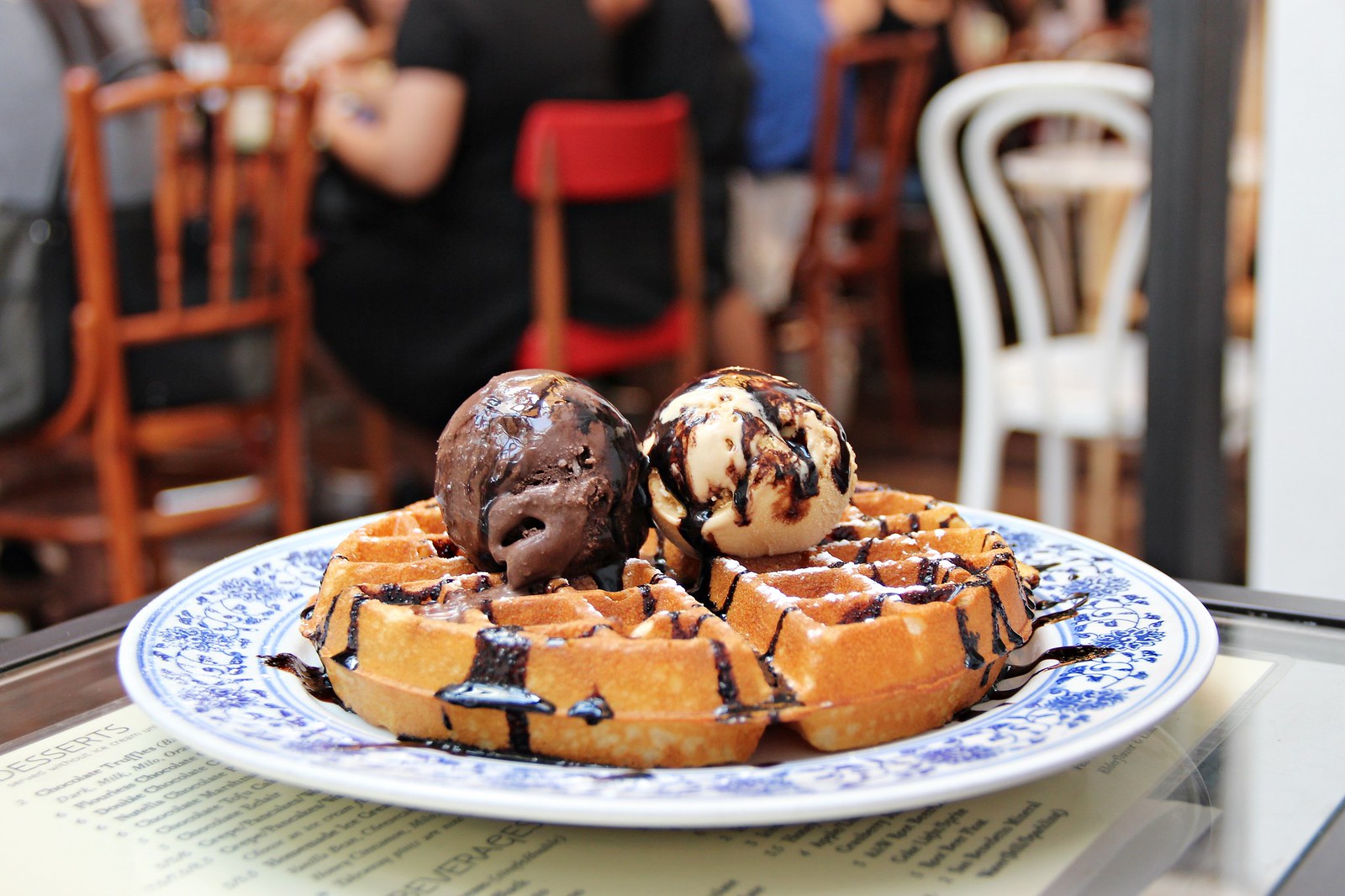 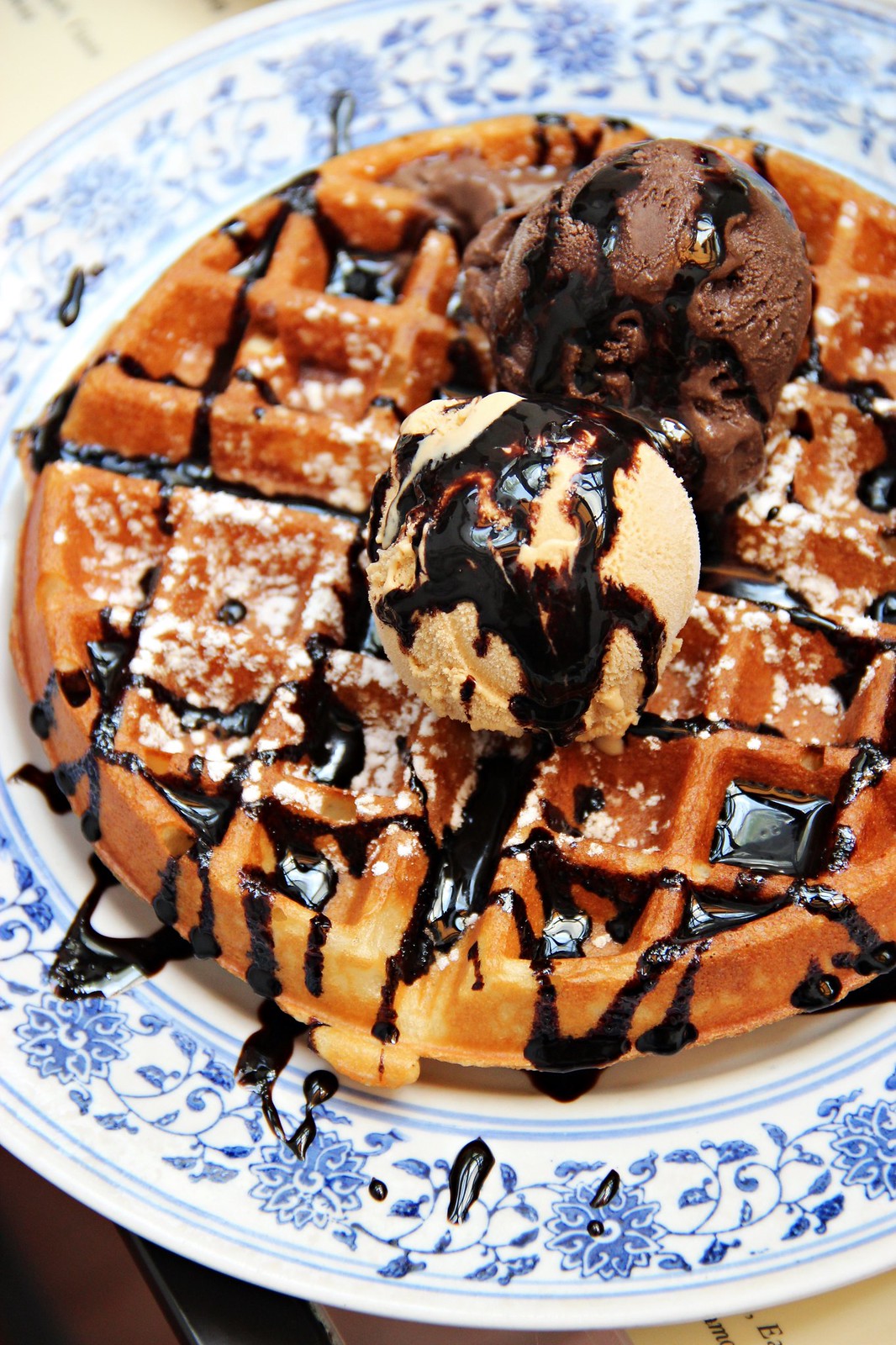 The newly renovated Strangers’ Reunion may cause a controversy on the spatial arrangement but one thing’s for sure, the waffles are still as crispy and popular as ever. Choose your buttermilk waffles with either berry compote and ice cream ($13.90), artisan greek yogurt ($12.90), strawberry maceration and ice cream ($13.90) or maple syrup and fresh fruits ($11.90). Tip: Go for the artisan greek yogurt, which is also my favorite. Recently, Strangers’ Reunion has opened Waffle Slayer just next door, featuring gourmet waffles of exotic flavors. If you’re bold enough, pop by next door and get that squid ink waffle as well. 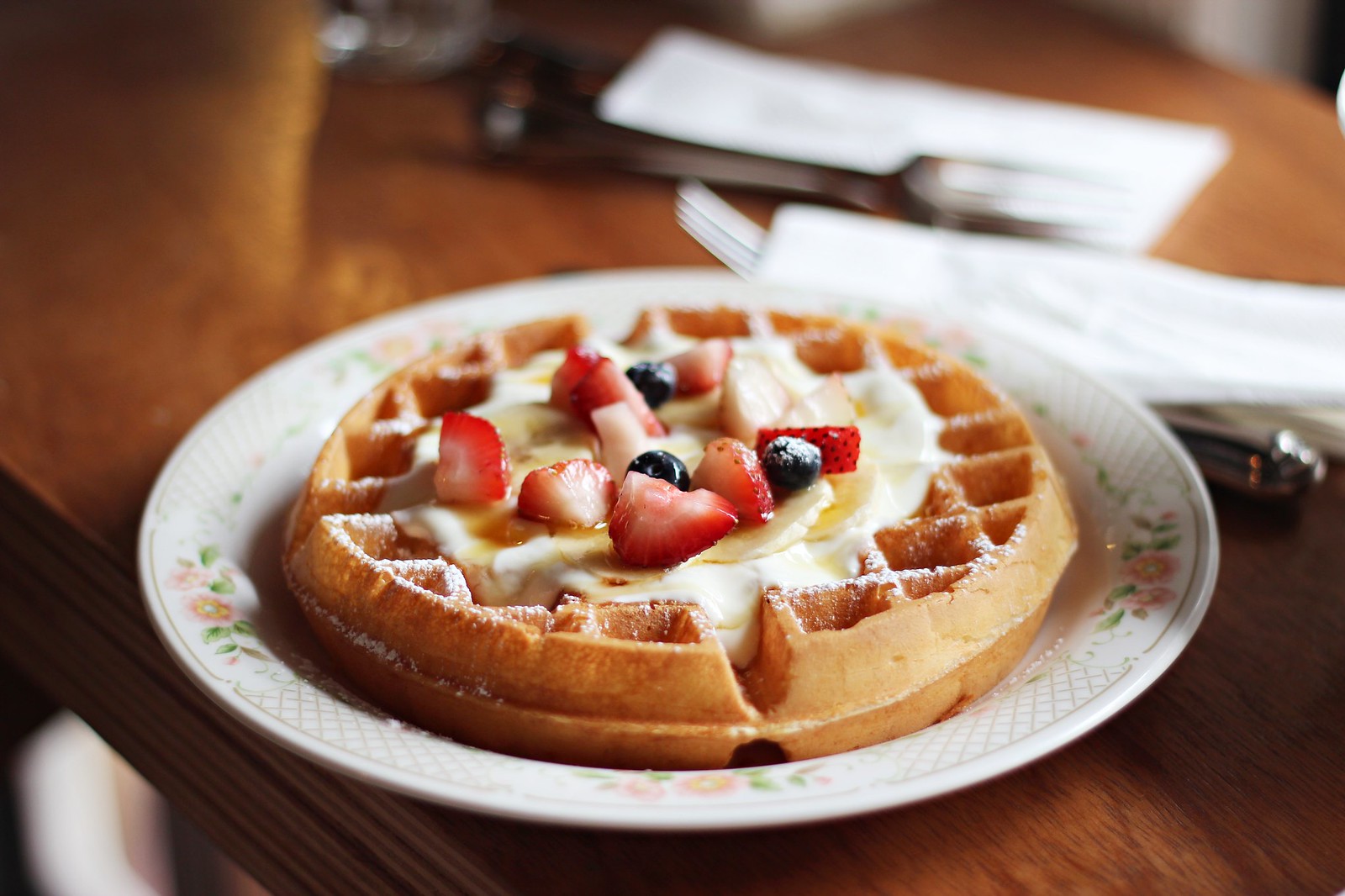 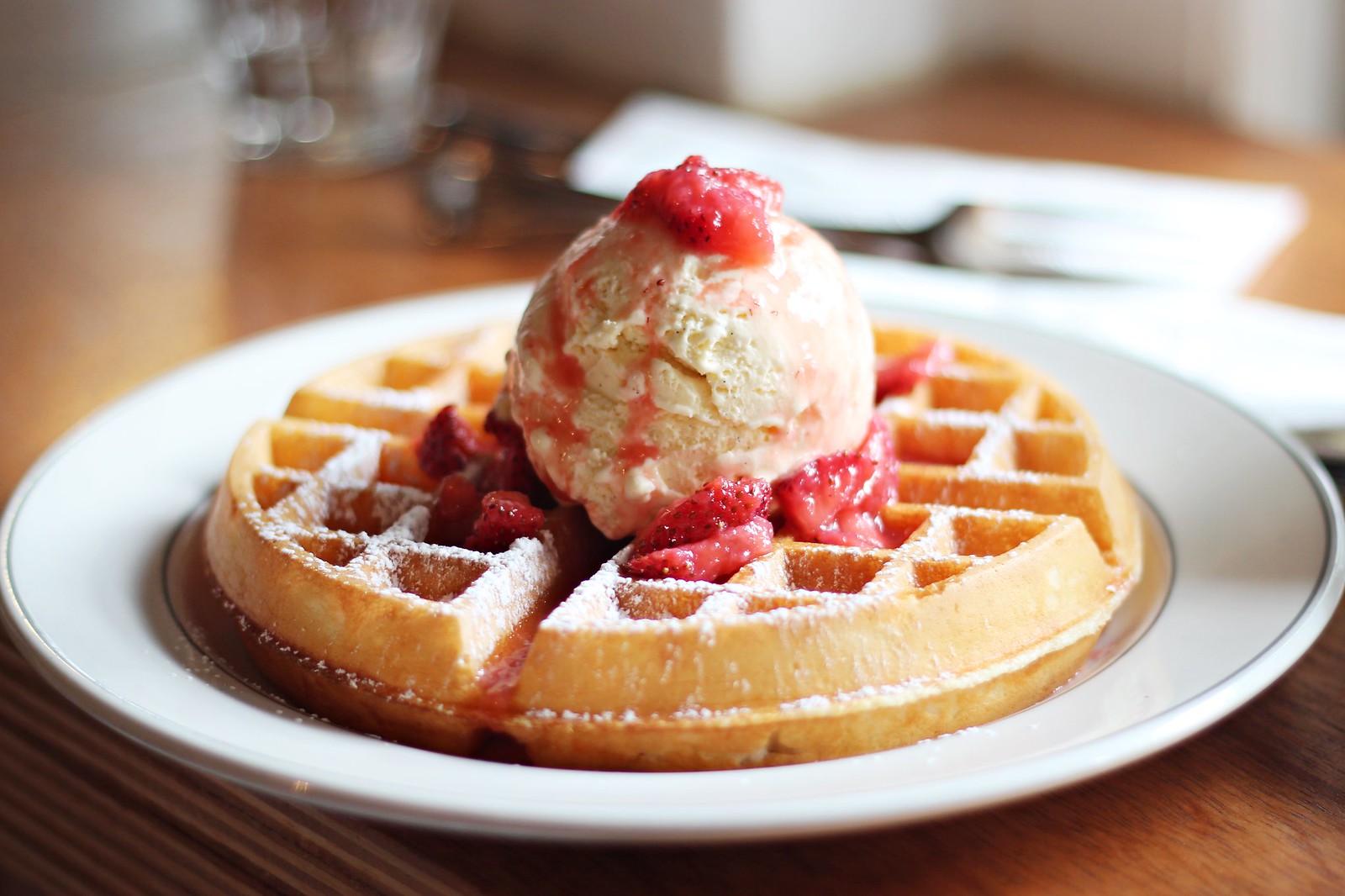 New kid on the block Assembly Coffee is a “third wave coffee movement” which is getting busier by the day, what with the good coffee paired with scrumptious waffles you can get at this small cafe. The Salted caramel buttermilk waffles ($11.50) packs a powerful punch with the thick salted caramel (oh so good) drizzled all over vanilla ice cream atop crispy yet fluffy waffles. Indeed, this new cafe with a thriving business can give old favorites like Strangers’ Reunion and Wimbly Lu a run for their money. An alternative to the salted caramel version is the Chocolate and strawberries ($11.50). 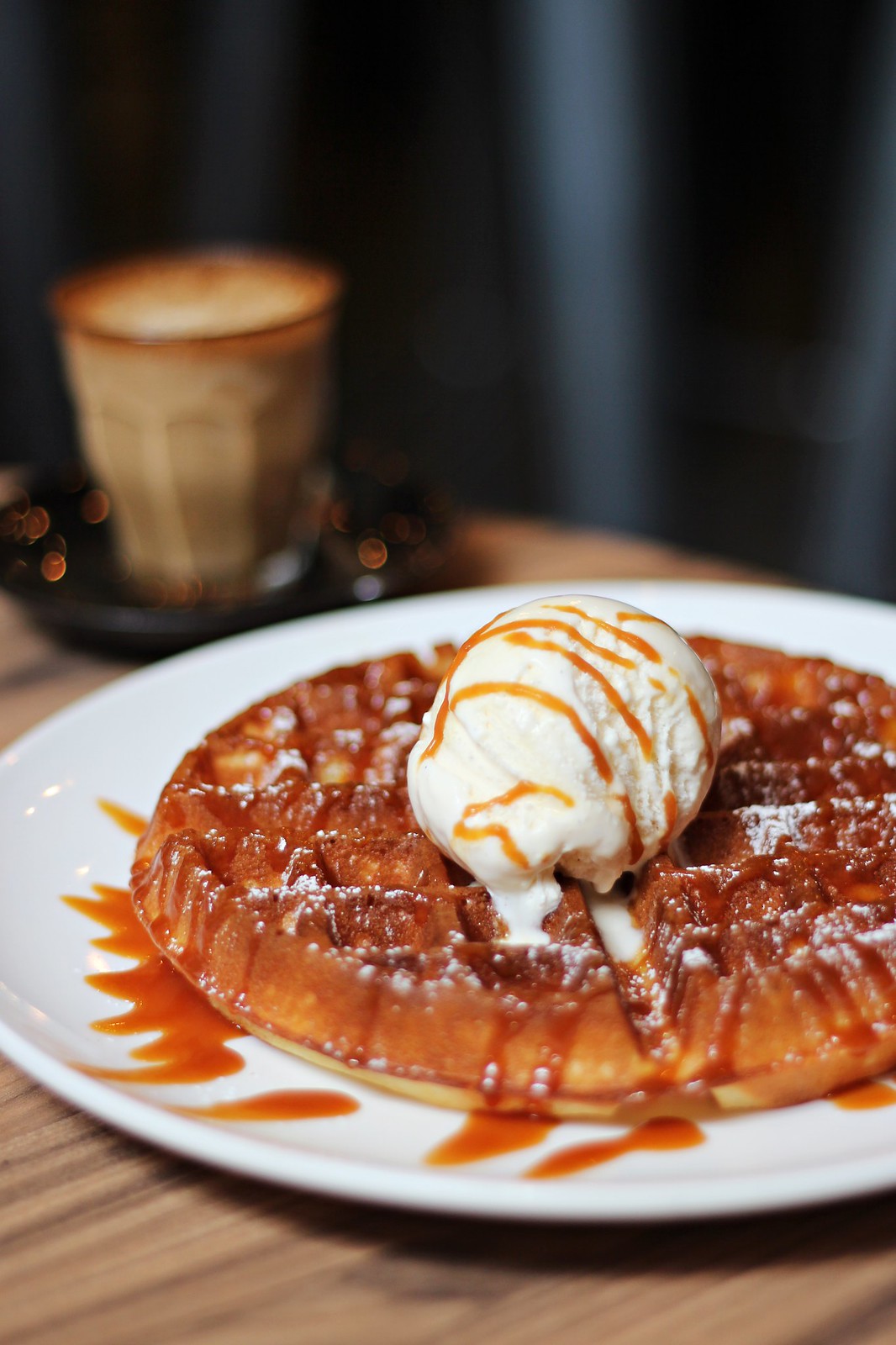 Catered to the joy of heartland folks is Creamier, an ice cream parlor under a block of flats in old residential estate Toa Payoh. I’ve been a proud fan of Creamier since their early days of establishment and even though the space is getting less spacious and quiet, it doesn’t stop me from setting up ice cream dates with friends here. Creamier’s waffles come in fun-sized squares and are extremely crispy, thick and airy. Some of the more crowd-pleasing ice cream flavors include the signature sea salt gula melaka, the seasonal orange milk chocolate, and the limited edition satsuma imo. The possibilities are endlessly interesting. Waffles with a scoop of ice cream are priced at $8.50 and $2.50 for an additional scoop. 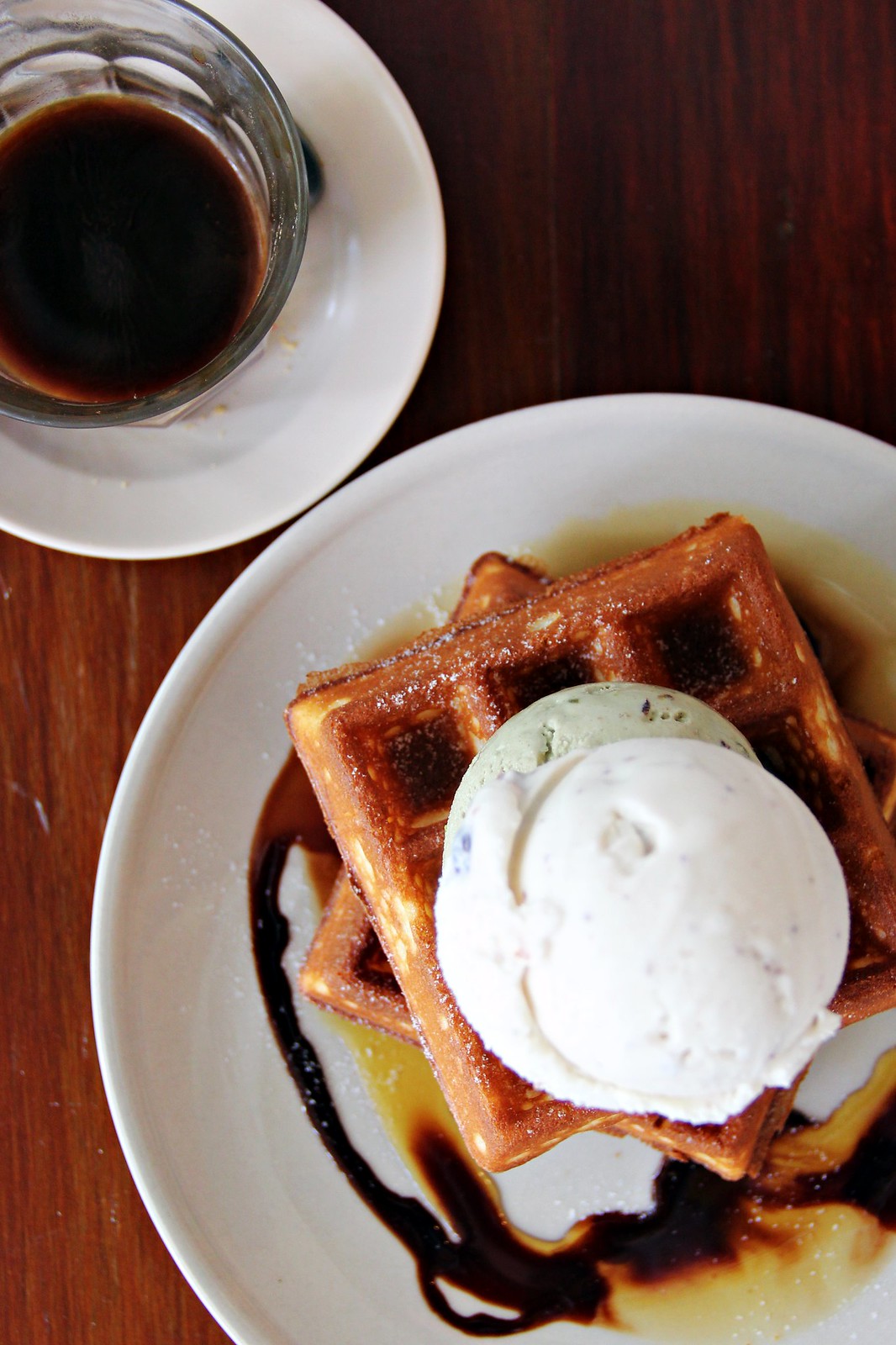 Department of Caffeine, or D.O.C. in short, has served up waffles which rose to fame almost instantaneously for their quality. The result is the hefty price tag put on each of them. Despite that, cafe-hoppers come and go without complaints and instead, relish the all-time favorite Buttermilk waffles with ice cream and rum bananas ($15, $4 for additional scoop of ice cream). Those rum-soaked bananas on that thick waffle are sure to make you crave for more. Other waffles include the waffles with peanut butter jelly ($14), the savory sundried tomato and herbs waffle ($17) and the limited edition valrhona chocolate waffles ($20). 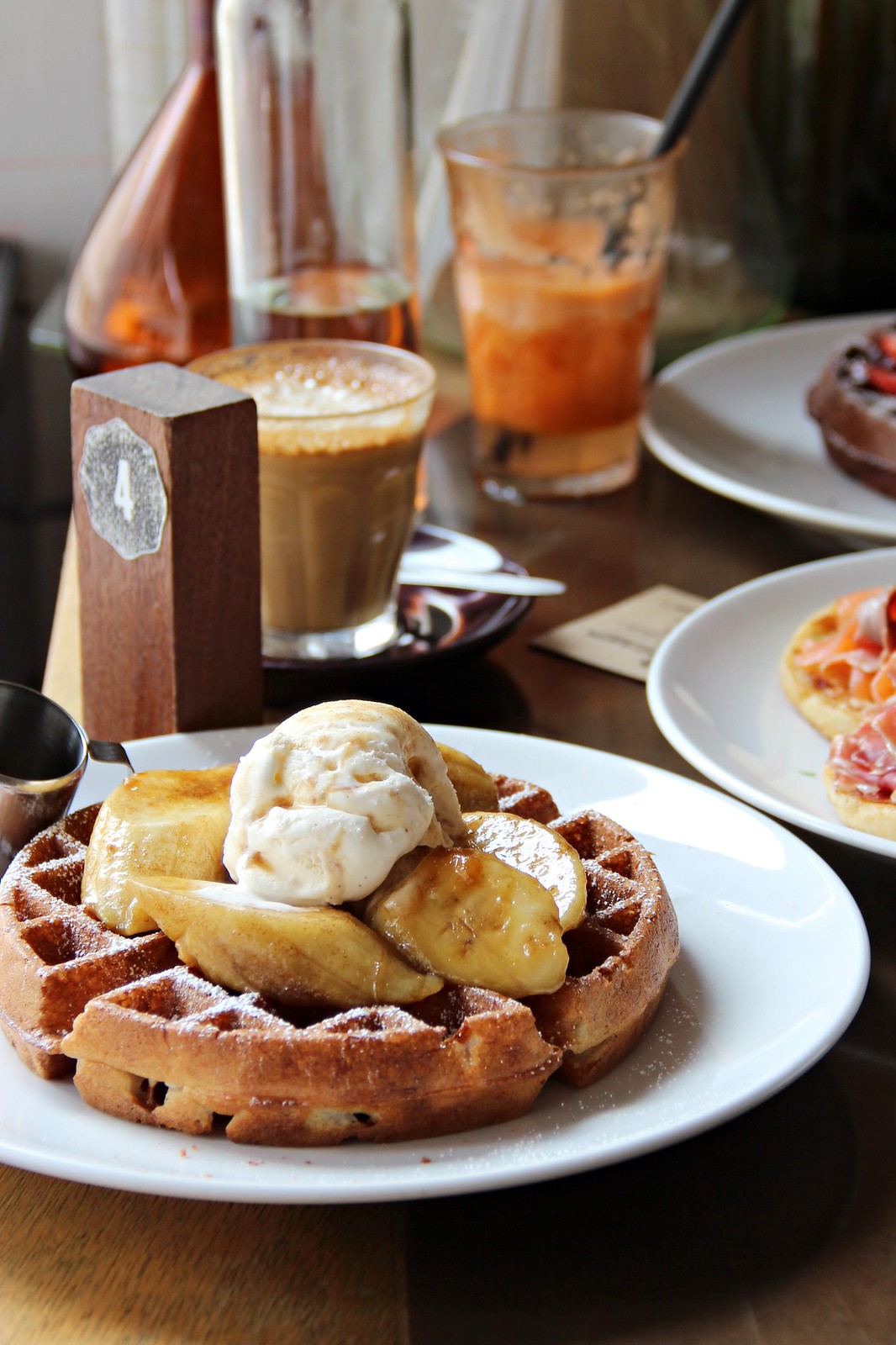 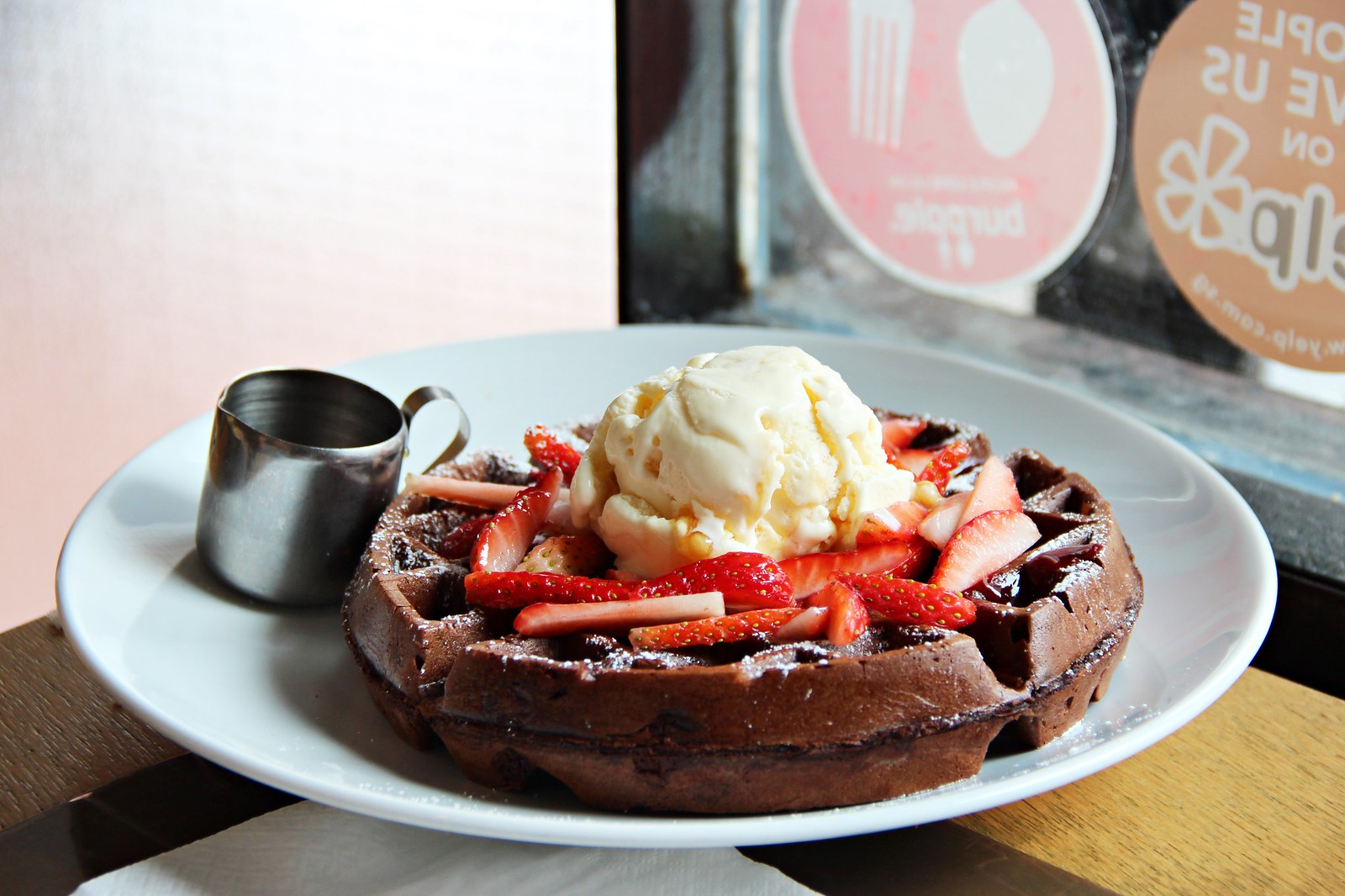 Yet another ice cream parlor, Salted Caramel has gained the delights of both school kids and working adults alike with their quality ice cream and waffles at pocket-friendly prices. Try their recommended flavors, which include salted caramel (…obviously), horlicks tim tam, and espresso & caramel biscuits. The only gripe I have is with it’s ill consistency at times. Waffle with a scoop of ice cream is priced at $6.50 and $2 for an additional scoop. 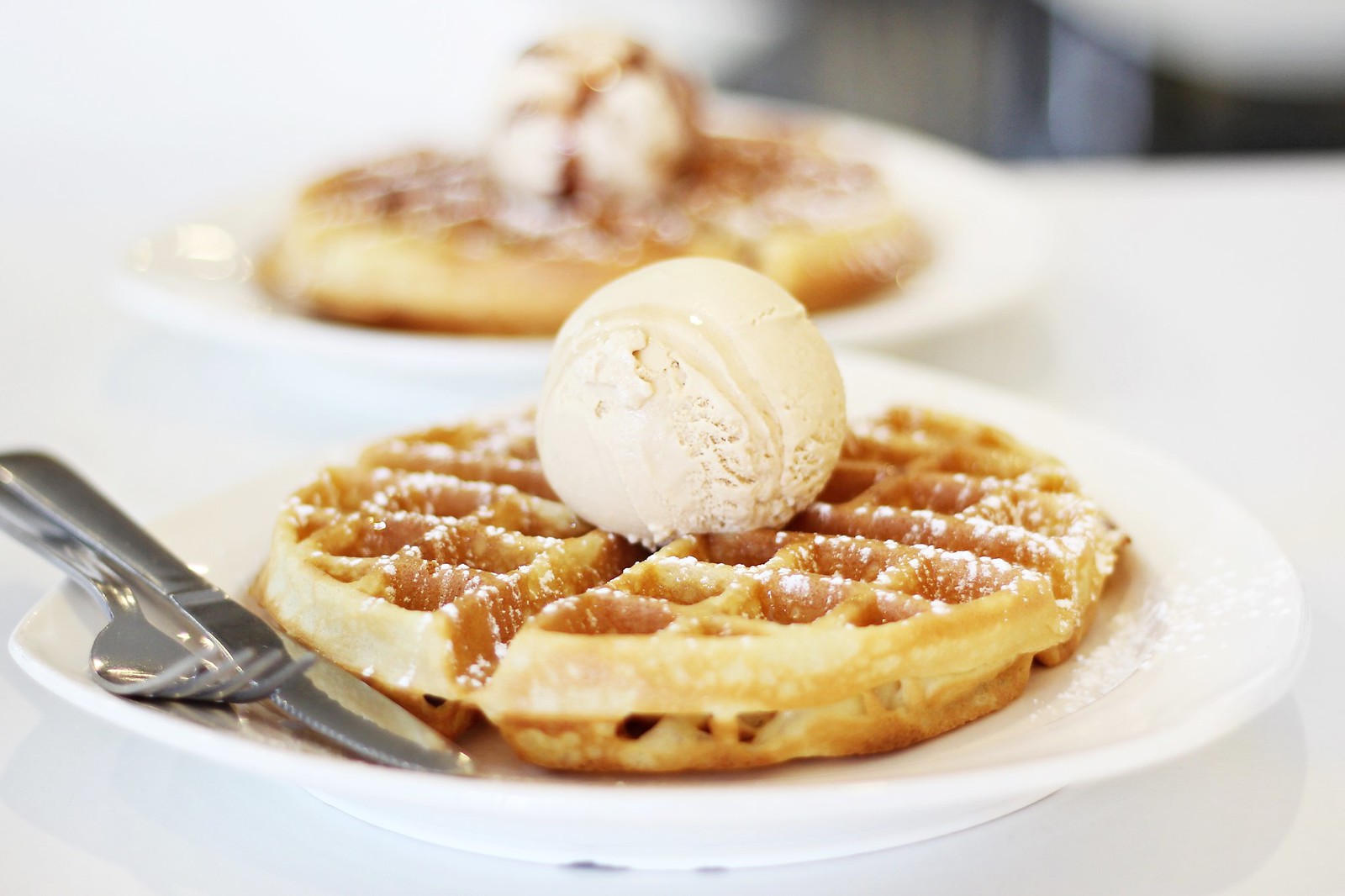 3 thoughts on “Best Waffles in Singapore”