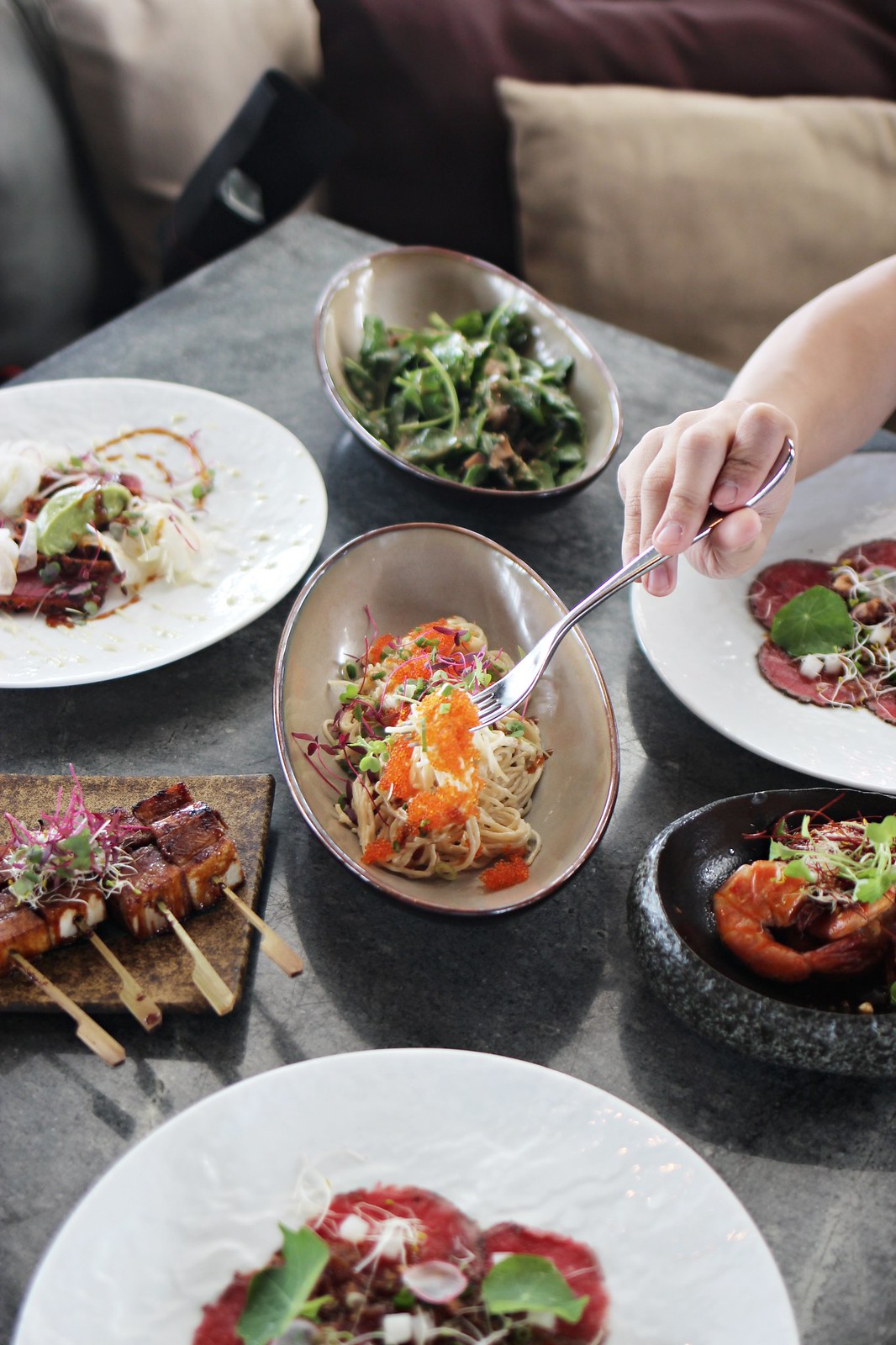 With a recent makeover to its menu, Ce La Vi has shifted its focus on modern Japanese to modern Asian cuisine: think traditional Asian sauces, paired with dishes prepared with Western cooking techniques. Here’s yet another place to consider for that elegant corporate lunch or snoozy weekend brunch. 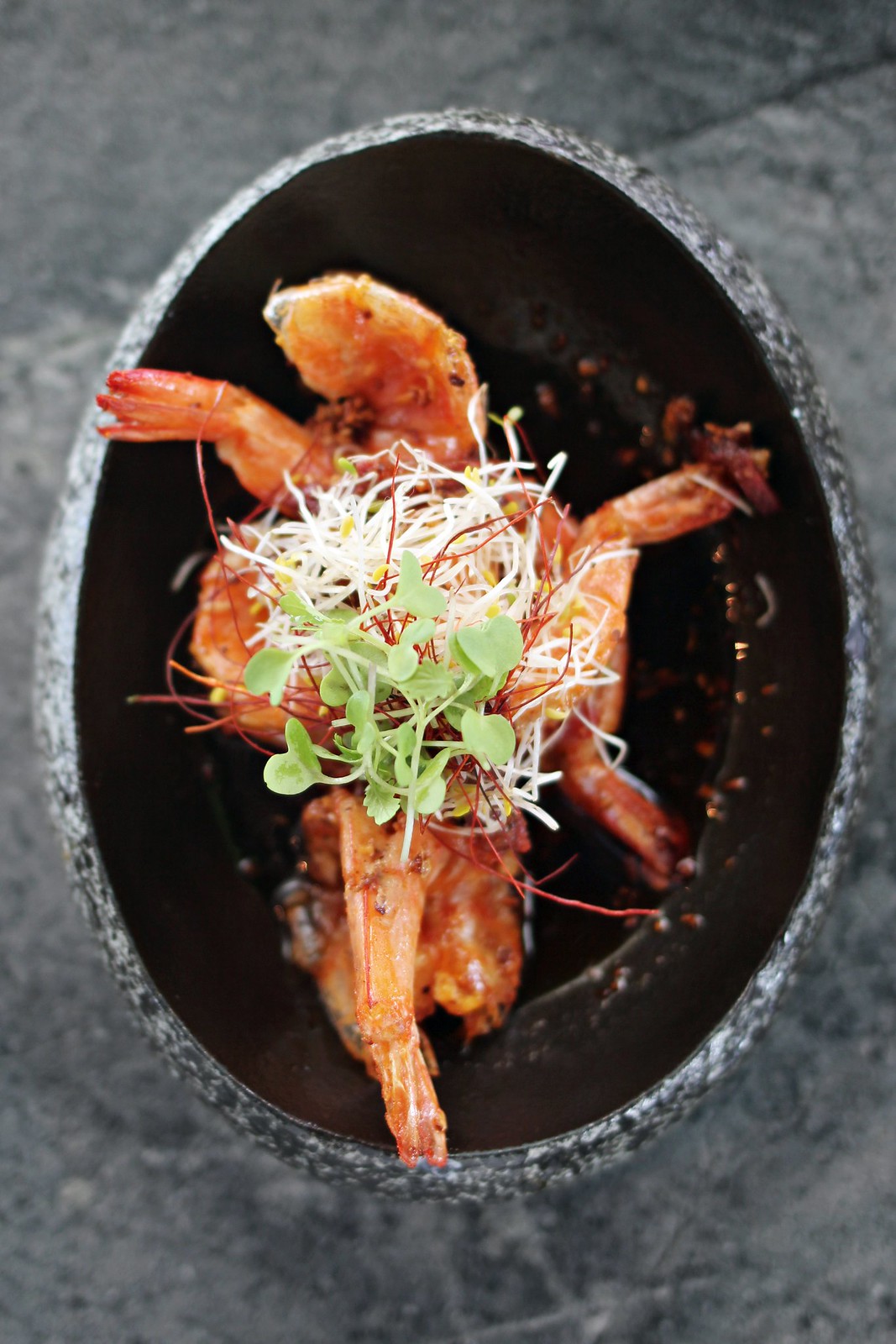 So we started our 10-course lunch that day (yes, 10 courses) with some all new appetizers. The peeled, sautéed Garlic Prawns ($35) tossed with chorizo and paprika were nicely marinated such that there were no distinct traces of fishiness. And I don’t usually eat prawns for that fishy taste, mind you. 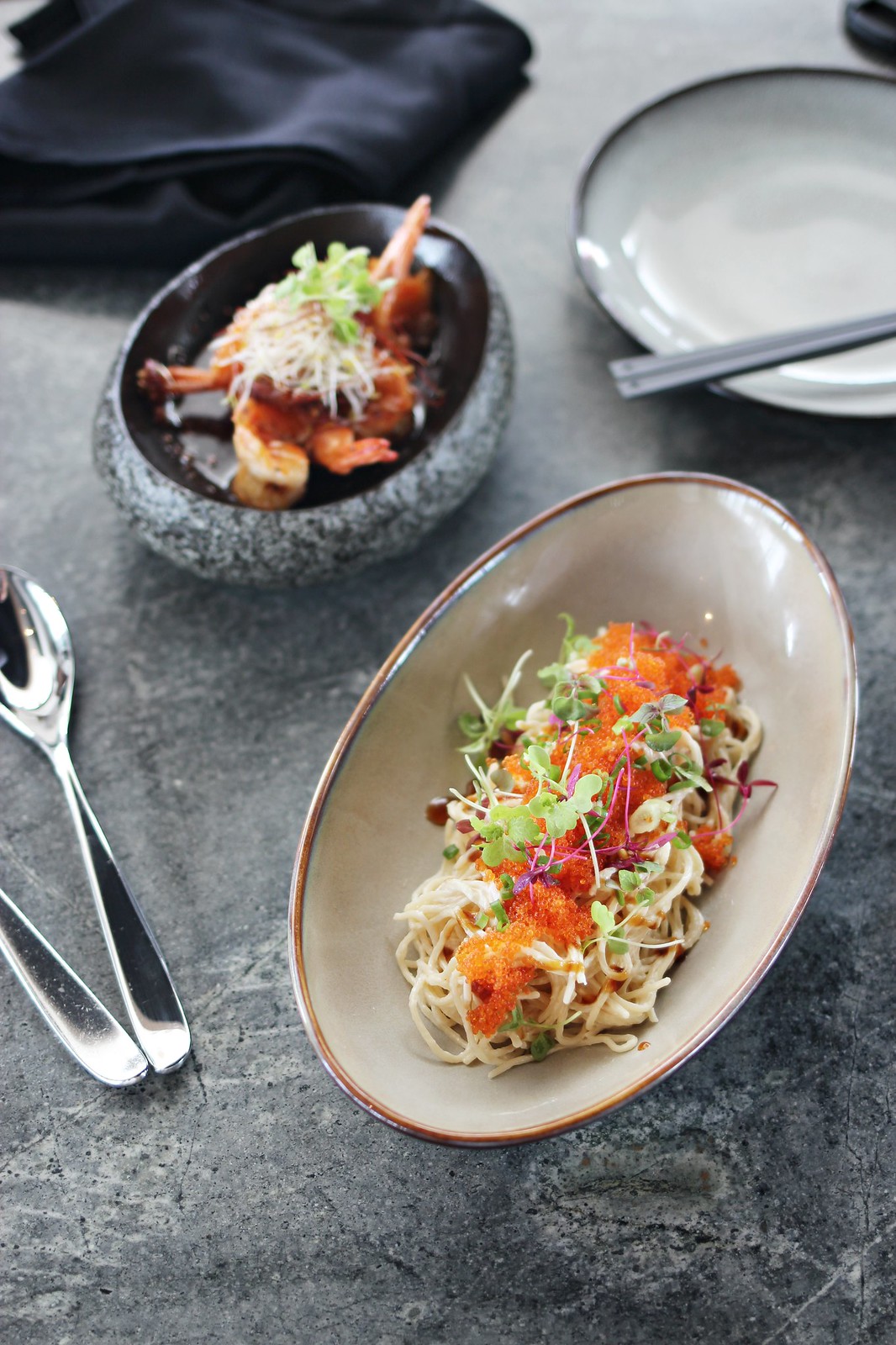 The garlic prawns were also all good to pair with the Marinated Angel Hair ($22) topped with tobiko (flying fish roe) and spring onion. Served al dente style, the pasta remained springy despite all that time we took to get that shot. 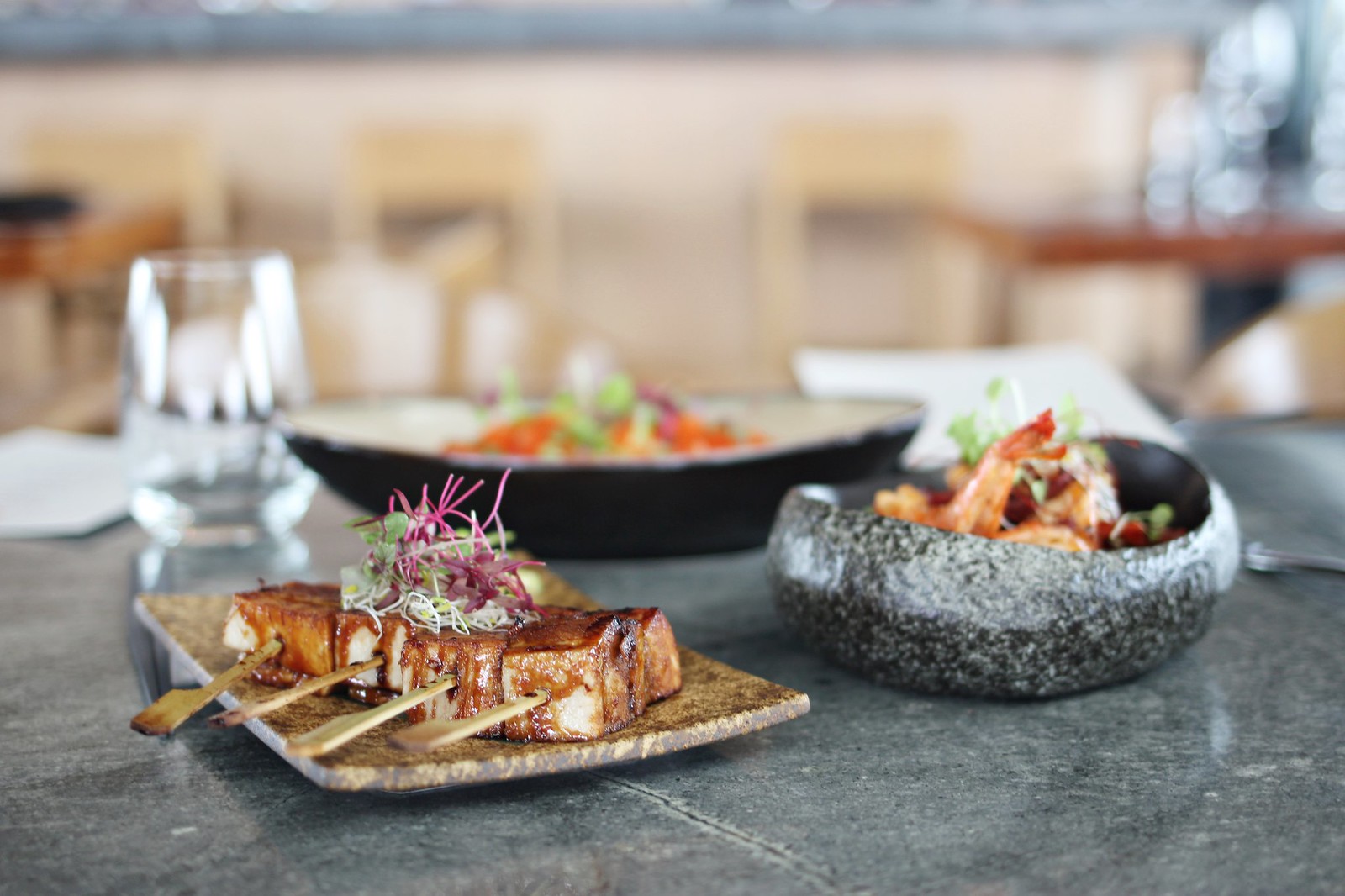 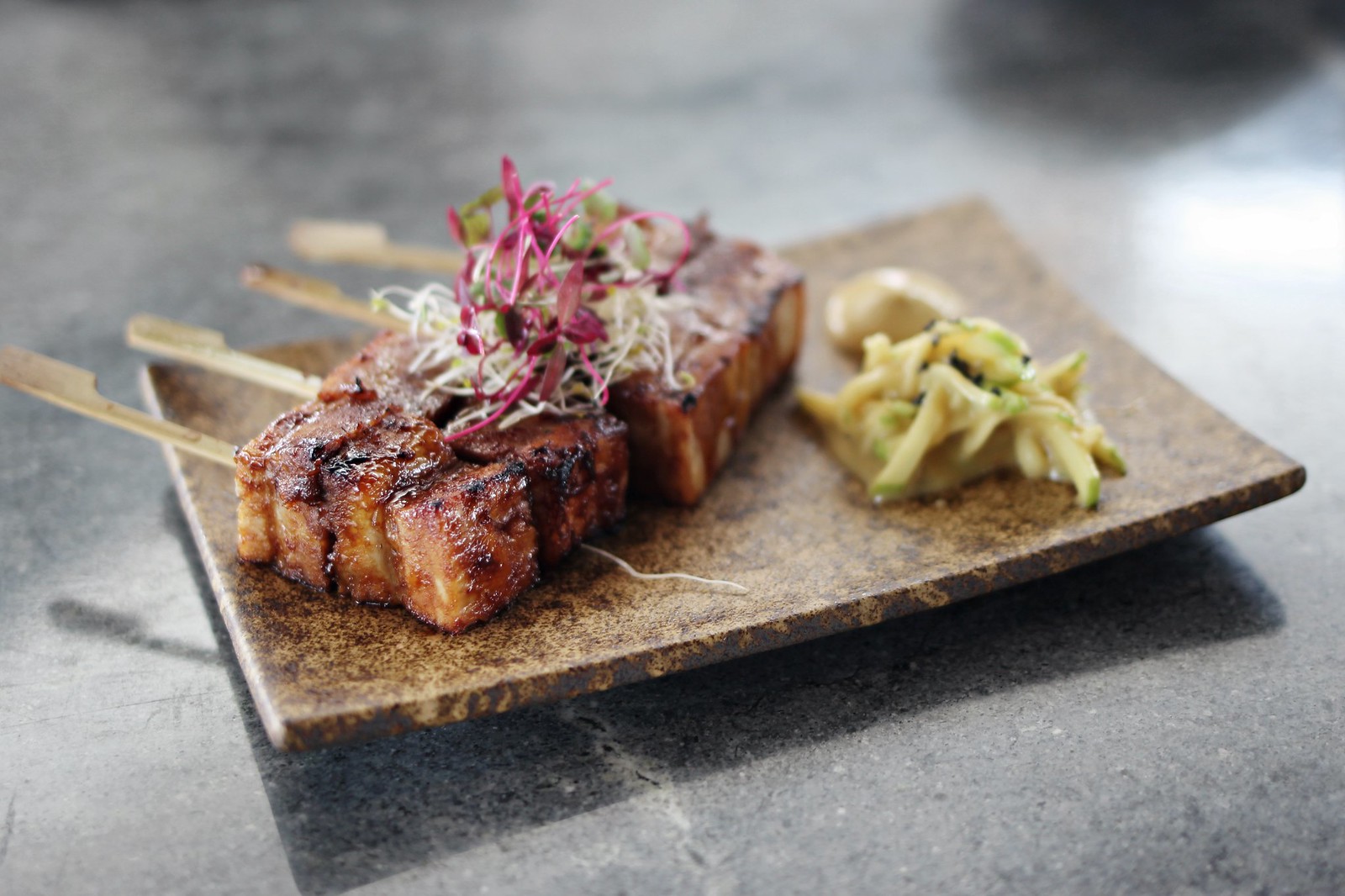 What we felt could be more tender and juicy was the Pork Belly Lollipop ($24), glazed with smoked chili and coming with apple mustard sauce on the side which you should dip the pork belly in. 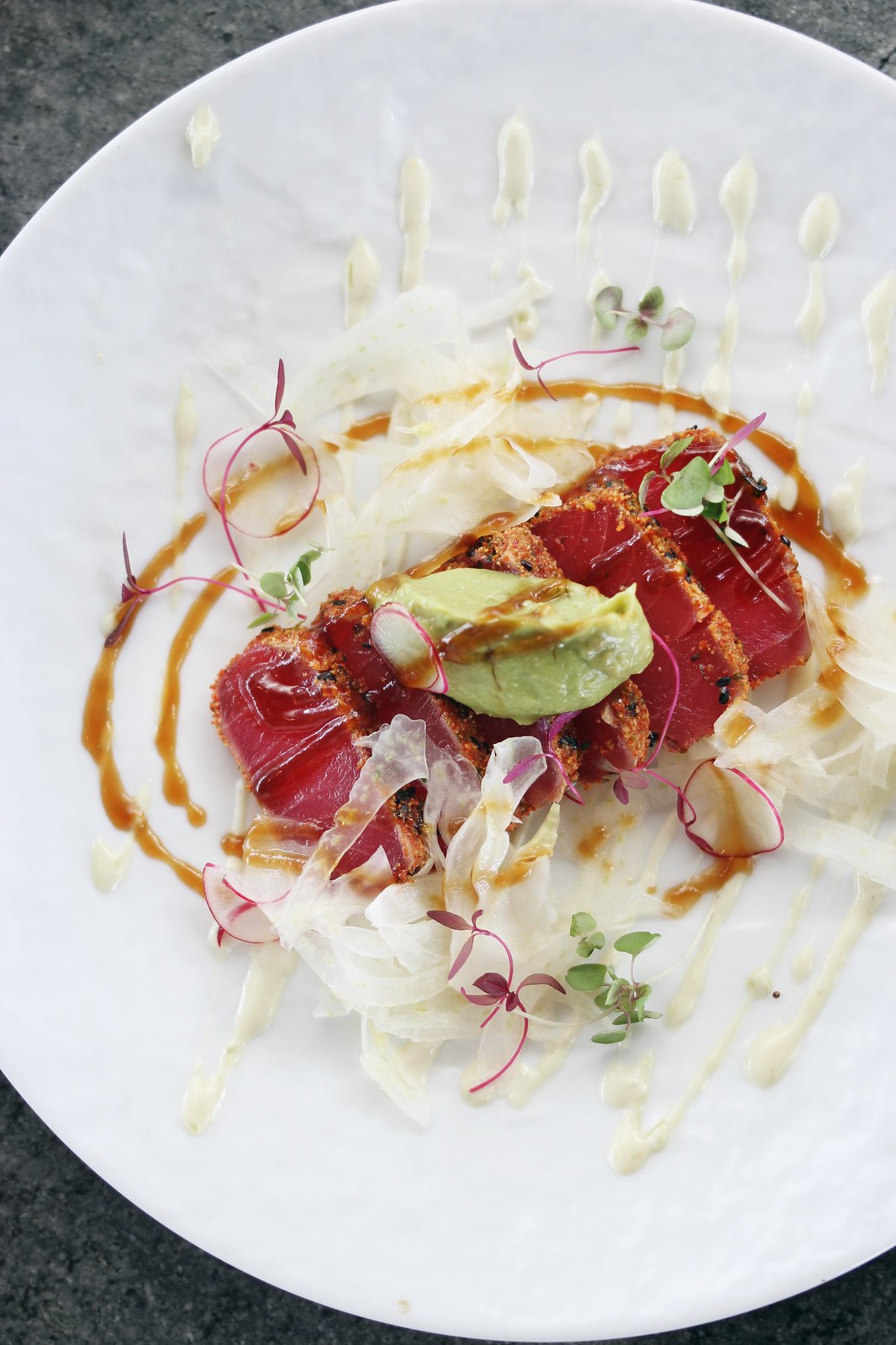 And it so happens that the raw dishes were my favorites of all the courses. I got caught unaware by the spices around its sides as well as from the wasabi cream of the Seared Togarashi Tuna ($28), in a very good way in that the spices were fiery yet addictive. 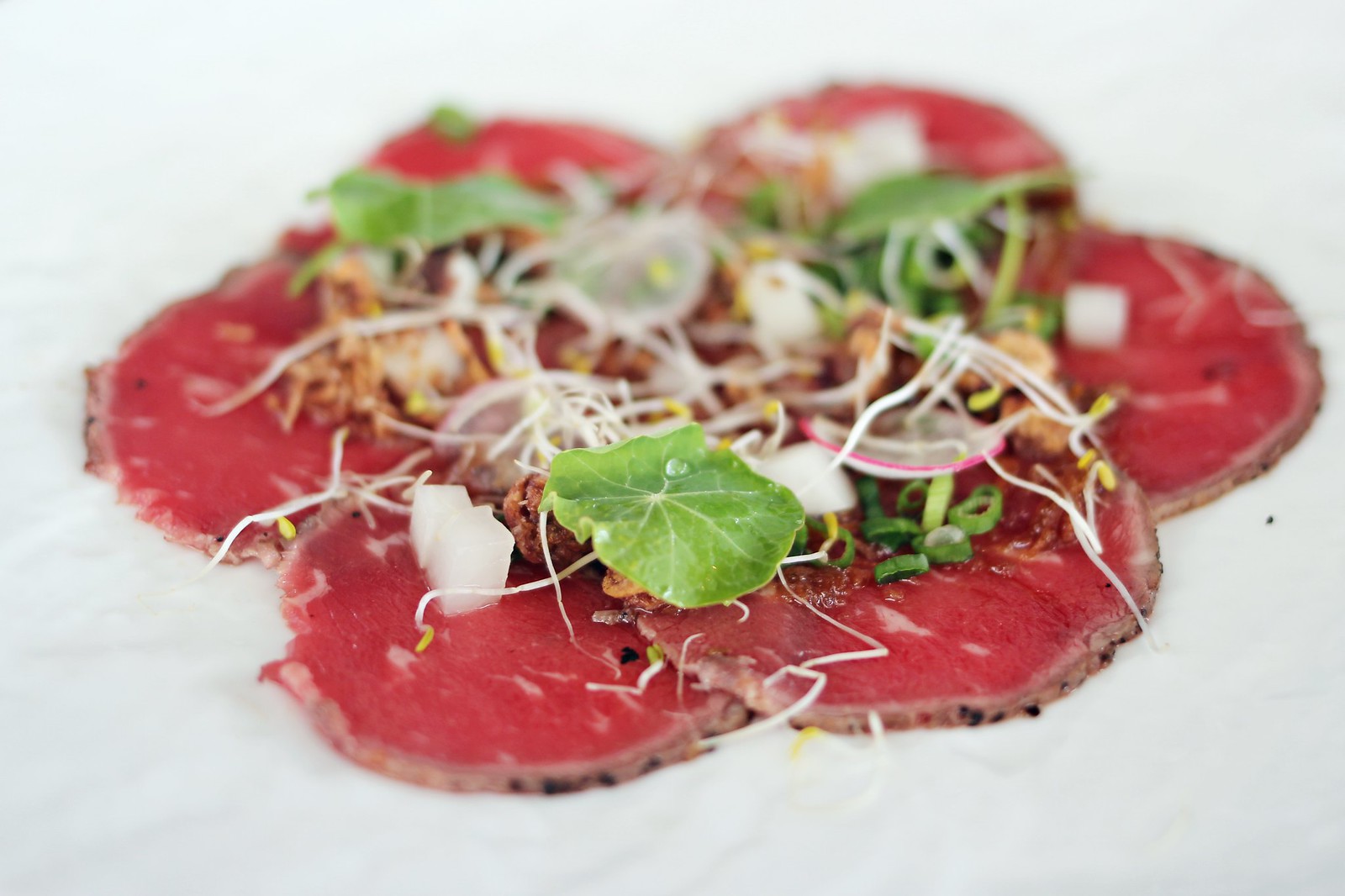 The combination of fried shallot toppings with the Black Angus Beef Carpaccio ($28) – served with pickled radish, wafu sauce and red radish – was a first for us and we found it interesting. It created additional texture

The Baby Spinach Salad ($20) with shiitake mushroom was all about the sauce, an infusion of goma and honey yuzu. That kept us reaching for our greens despite all the meat around to taste. 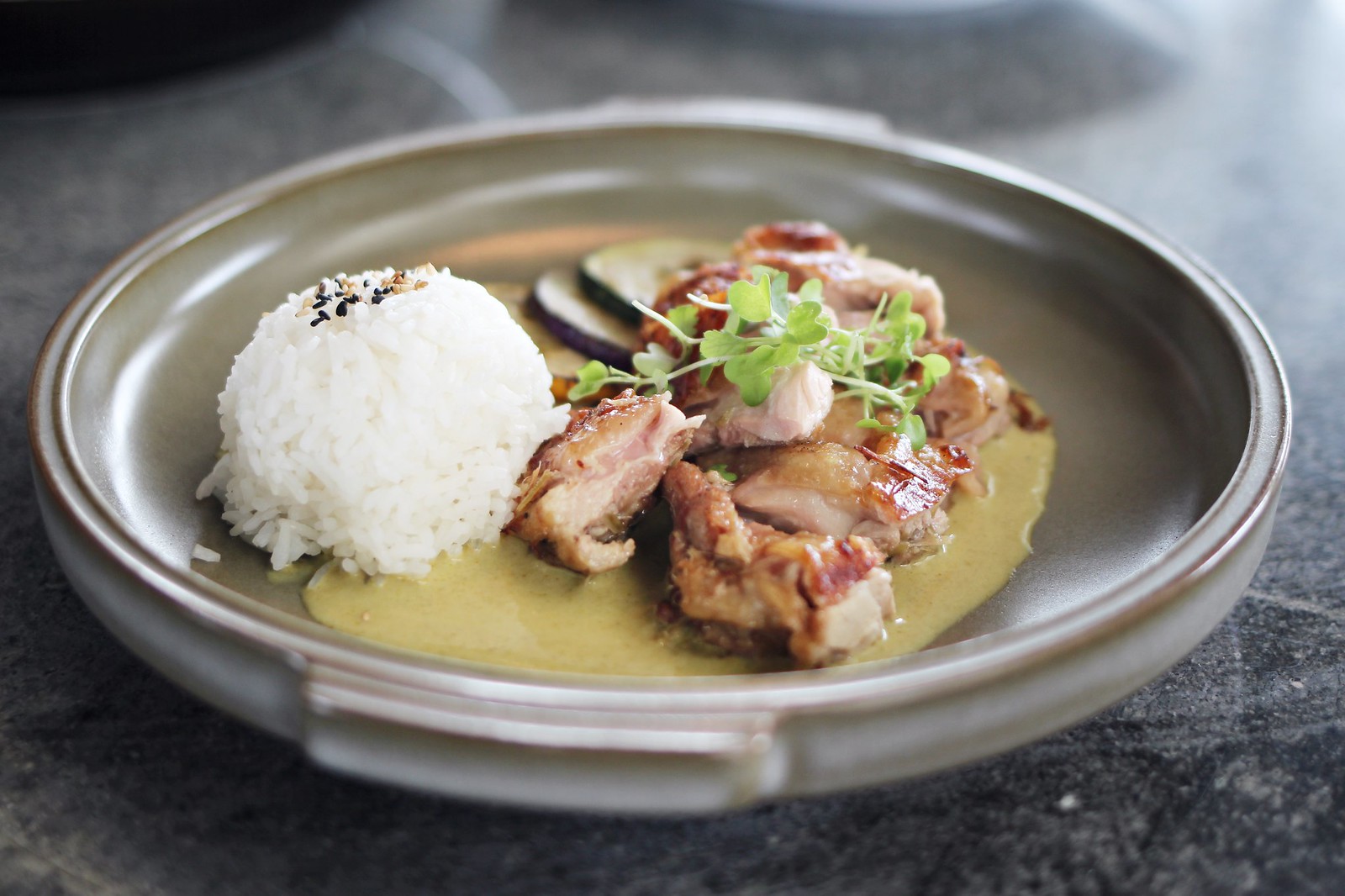 We had two entrees – the first being the Roasted Lemongrass Chicken ($34), served with eggplant, zucchini, kaffir lime, green chili sauce and steamed rice. The green chili sauce was reminiscent of the Thai green curry sauce, while the kaffir lime and lemongrass gave a slight zest to the chicken. 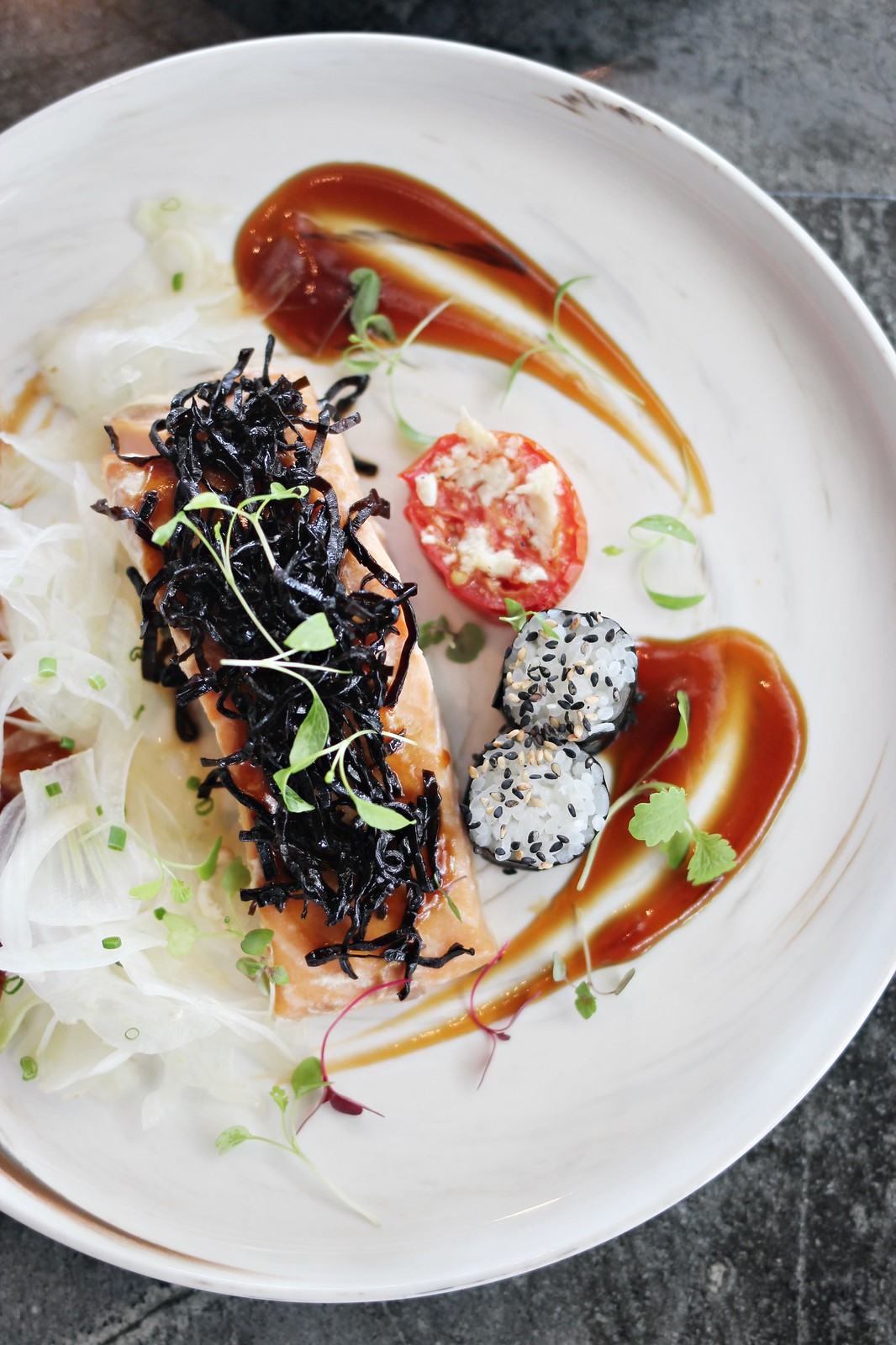 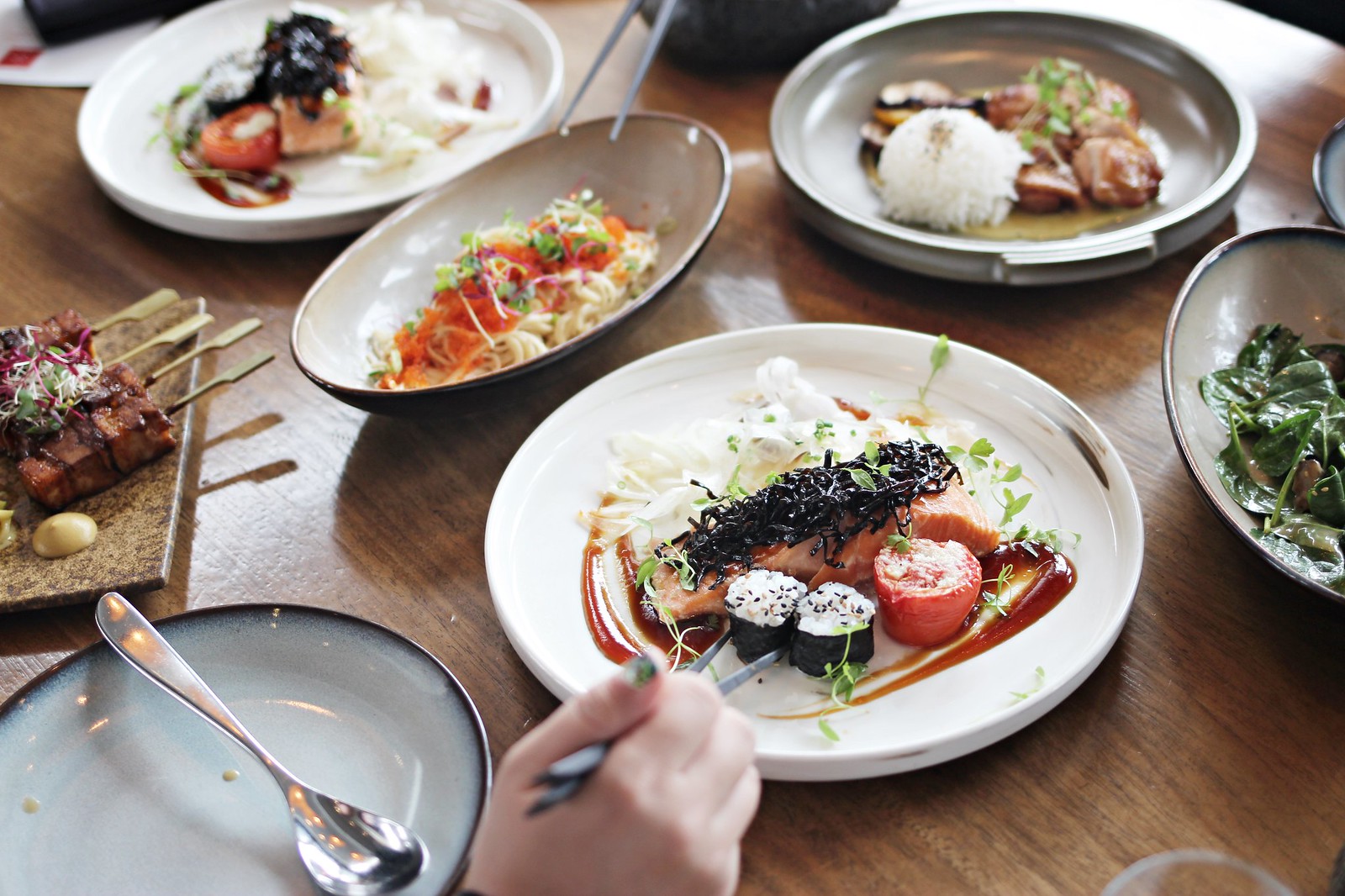 Meanwhile, the Slow Cooked Norwegian Salmon ($42) with teriyaki sauce, konbu, soy mirin glaze and rice roll was one seemingly simple, comfort dish done right. Especially so with that slow cooked salmon which is so moist that it slips down your throat. Apparently, the salmon is sous vide for more than 8 hours, allowing it to retain lots of moisture. 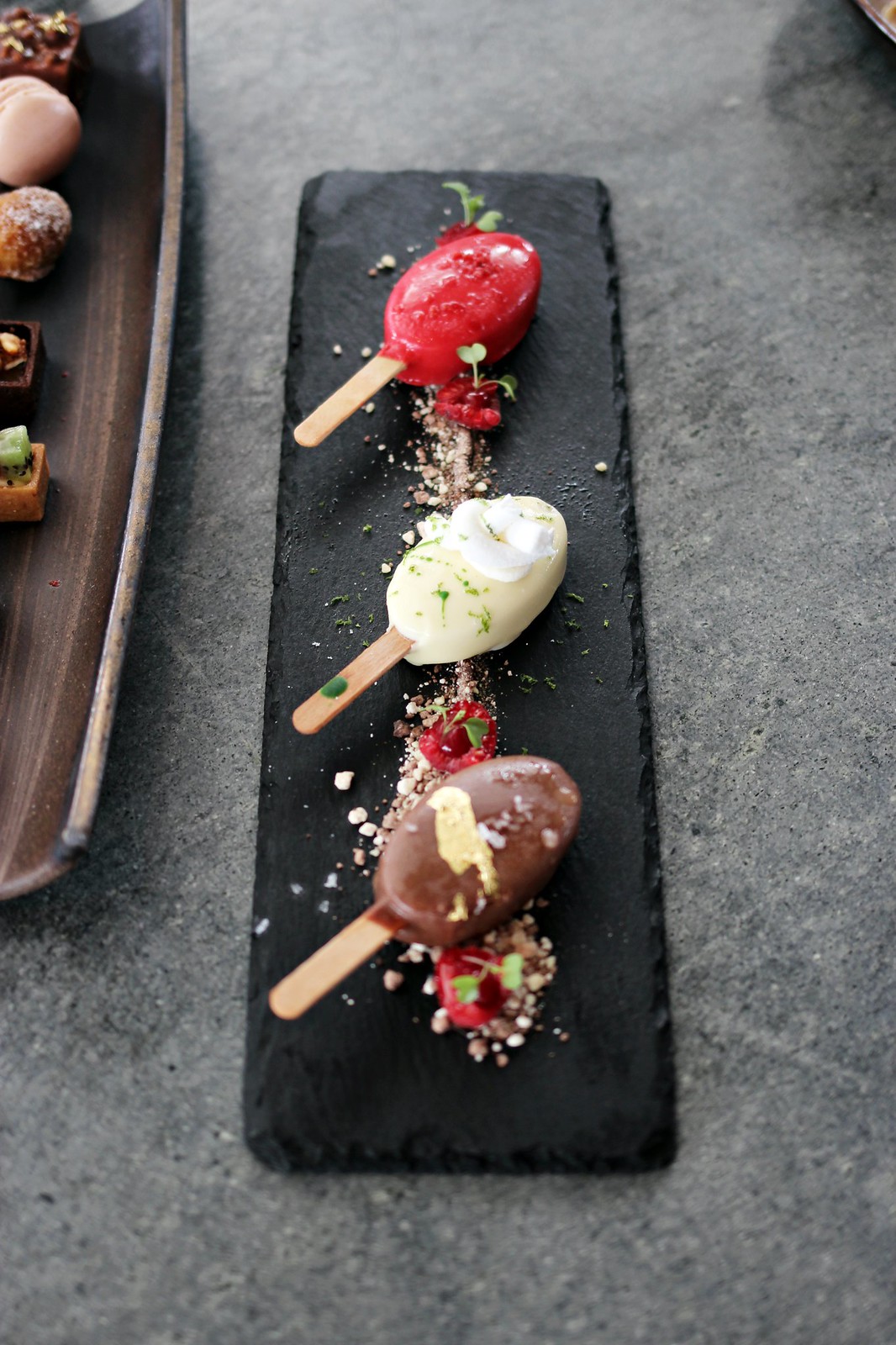 Don’t worry, the Popsicle Trio ($24) won’t melt so you go ahead and take the extra snap for instagram story. They are actually cakes in disguise – flavoured lemongrass, salted caramel + chocolate, and strawberry vanilla. We did prefer this over the petit-fours.

The best part to the revamp is for sure the option for a Power Lunch (daily from 12pm – 3pm), which you pick between a 3-course and 4-course set lunch menu. The 3-course ($38++ per pax) comprises an appetizer of marinated angel hair, entree of either the salmon or chicken and dessert of petit fours. Meanwhile, the 4-course set ($48++ per pax) includes an additional starter of black angus beef carpaccio or garlic prawns. This is one huge bang for your buck! I guarantee you’ll be incredibly stuffed and satisfied.

Thanks to Ce La Vi and W Asia for the invite.