Tapas 24 – From Barcelona to Singapore 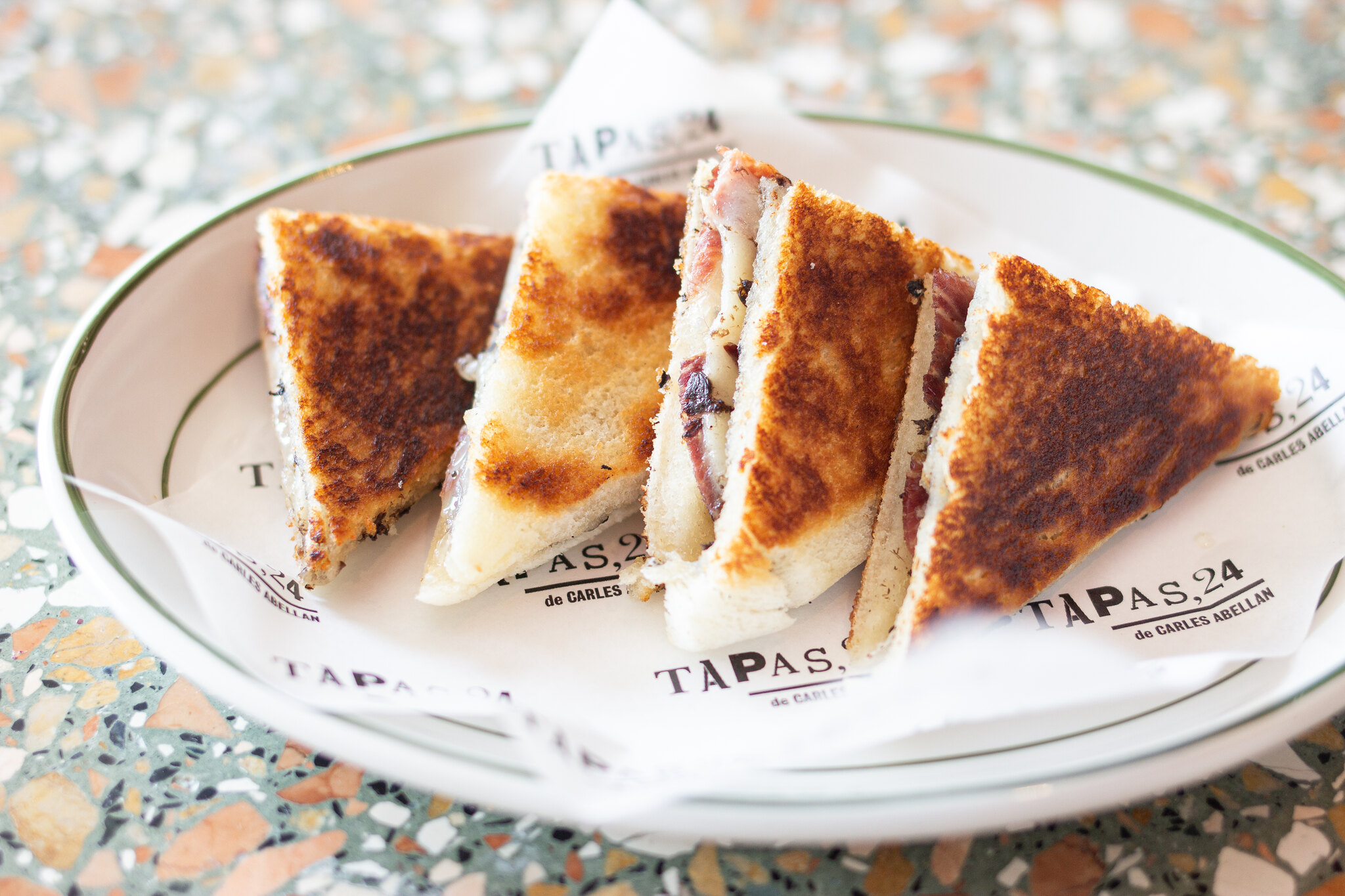 Tapas 24 is the first Asian outpost of the Barcelonian concept helmed by Michelin-starred Chef Carles Abellán. Though friends who visited the original concept in Barcelona gave praises, I kept my expectations low prior to my visit to the Robertson Quay outlet, mainly due to the mixed reviews online. 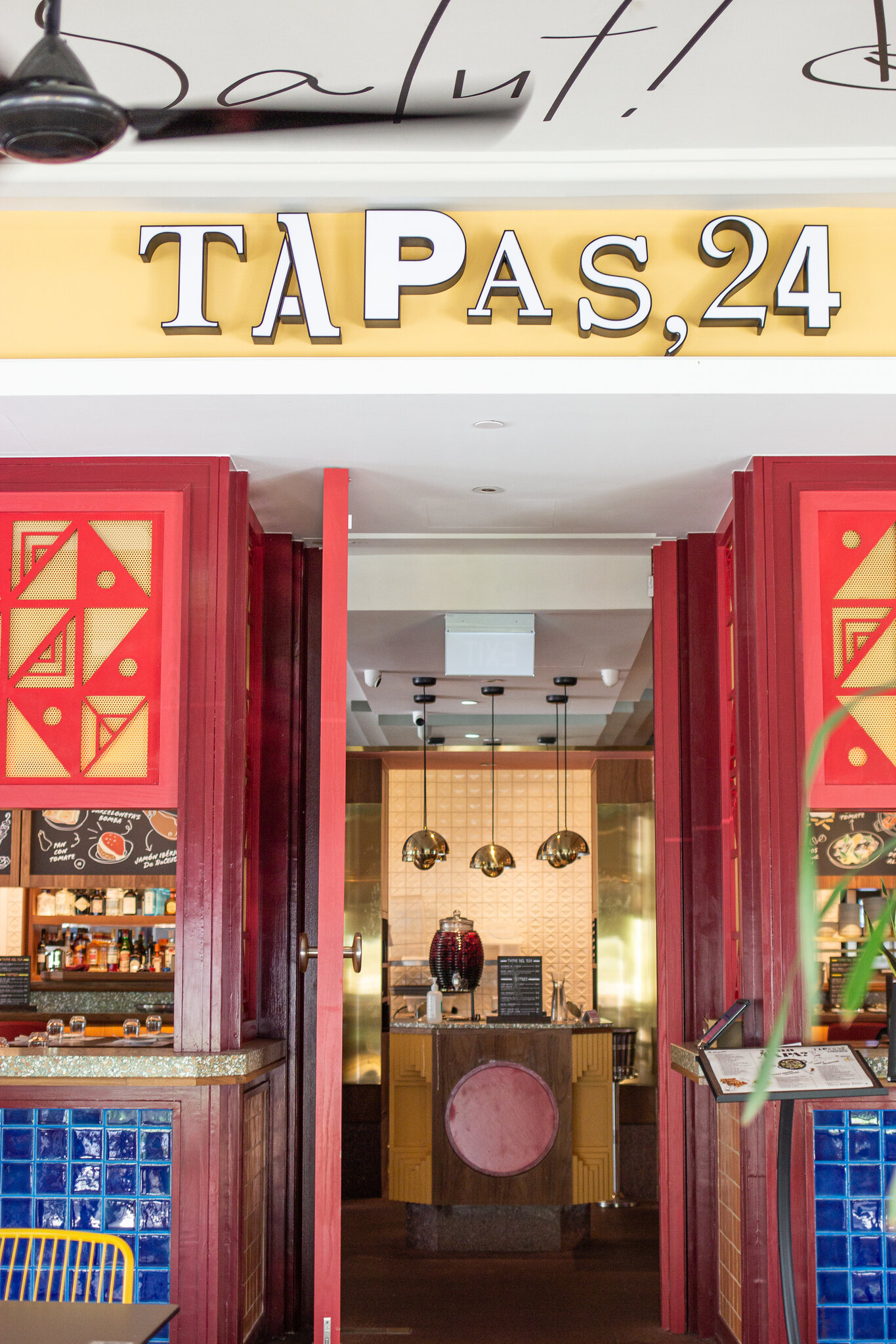 Entering the vibrantly coloured all-day restaurant bar, I was hosted by a staff who enthusiastically explained to us most of the dishes in the menu. Even considering that this was a media invite, the service was sincere. Spoilt for choice, we went for most of the recommended dishes. 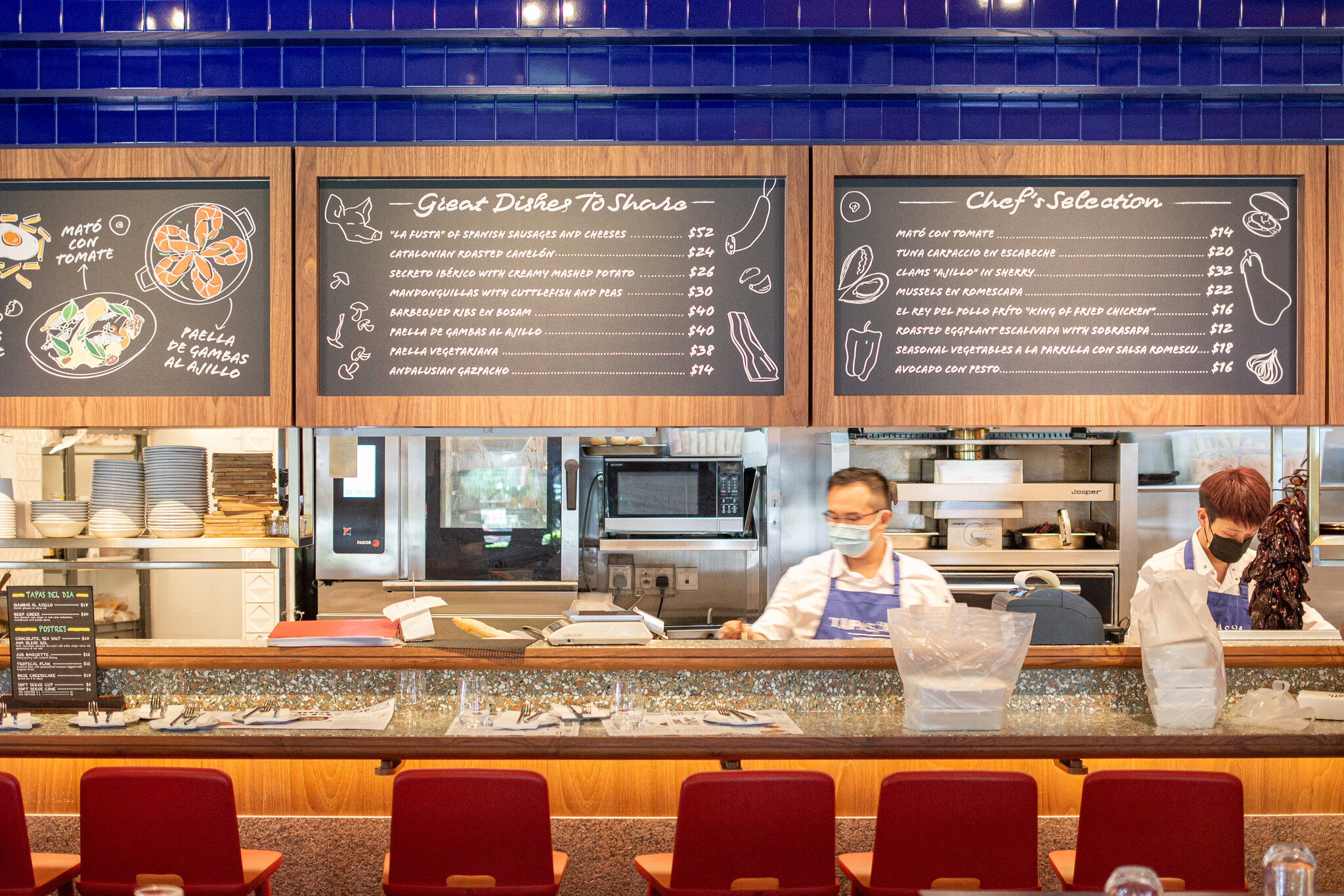 Touted as one of the biggest must-try items here, the Tapas 24 Bikini Sandwich ($16) with black truffles, iberico ham and buffalo mozzarella were decently good, but not amazing. I wished the thin fillings were more substantial in amount.

Two types of croquetas (i.e. Spanish croquettes) were on the menu – the Croquetas de Jamon (Spanish ham) ($10) which I would usually pick, and the Croquetas De Pollo ($8) which I decided to go for based on the host’s recommendation. The croquettes are made of slow-braised pulled chicken (yes, hand-pulled) in home-made velouté, then lightly breaded and deep fried. This was a delight as the pollo (chicken) filling was adequately tender and moist, with a crispy batter outer layer. 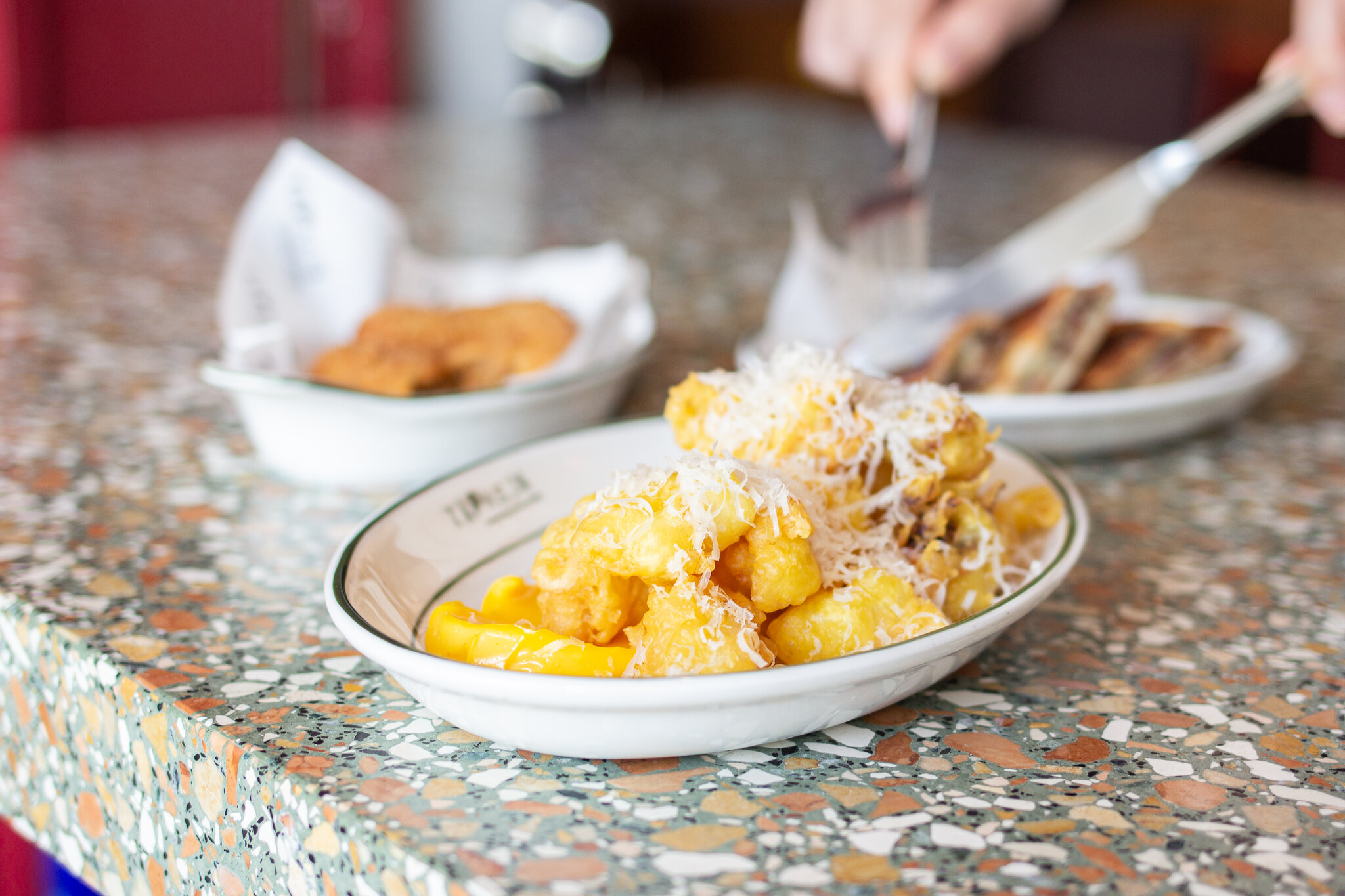 We were told that the Crispy Calamares ($16) is a dish less well-received by Asians due to the saffron mayonnaise that might come off as overly rich. And so we just had to order and try it for ourselves. Turned out that the saffron mayonnaise had an interesting taste profile which we liked together with the huge chunks of deep fried battered squid, but might be “gelak” for 1 or 2 pax. Instead, I recommend sharing it between 3 – 5 pax. 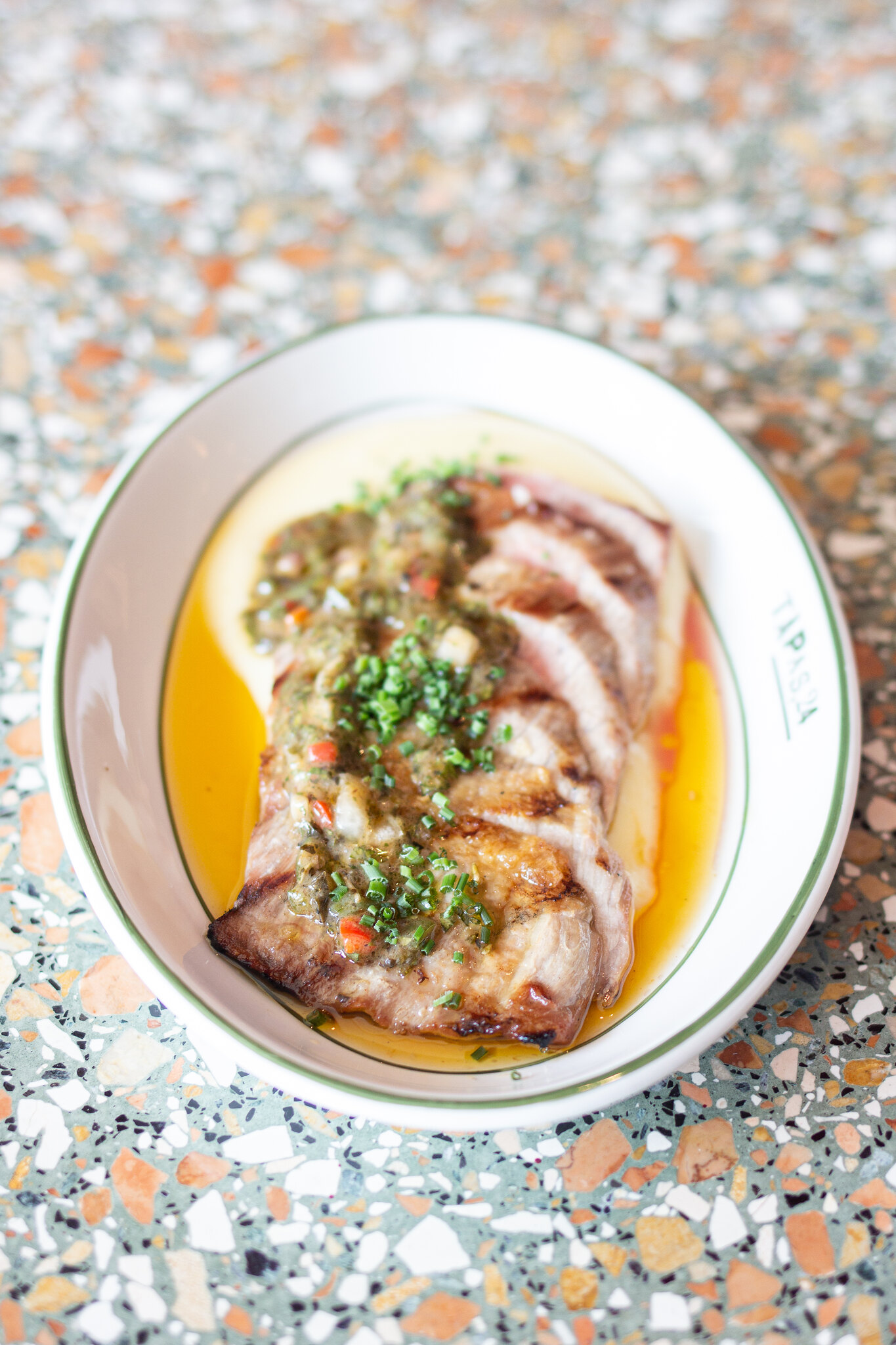 The Secreto Iberico ($26) is another one of my favorites in Spanish cuisine. I loved the pairing of flavours with chimichurri and creamy mashed potato in Tapas 24’s version of this dish, but wished the portion size could be larger. 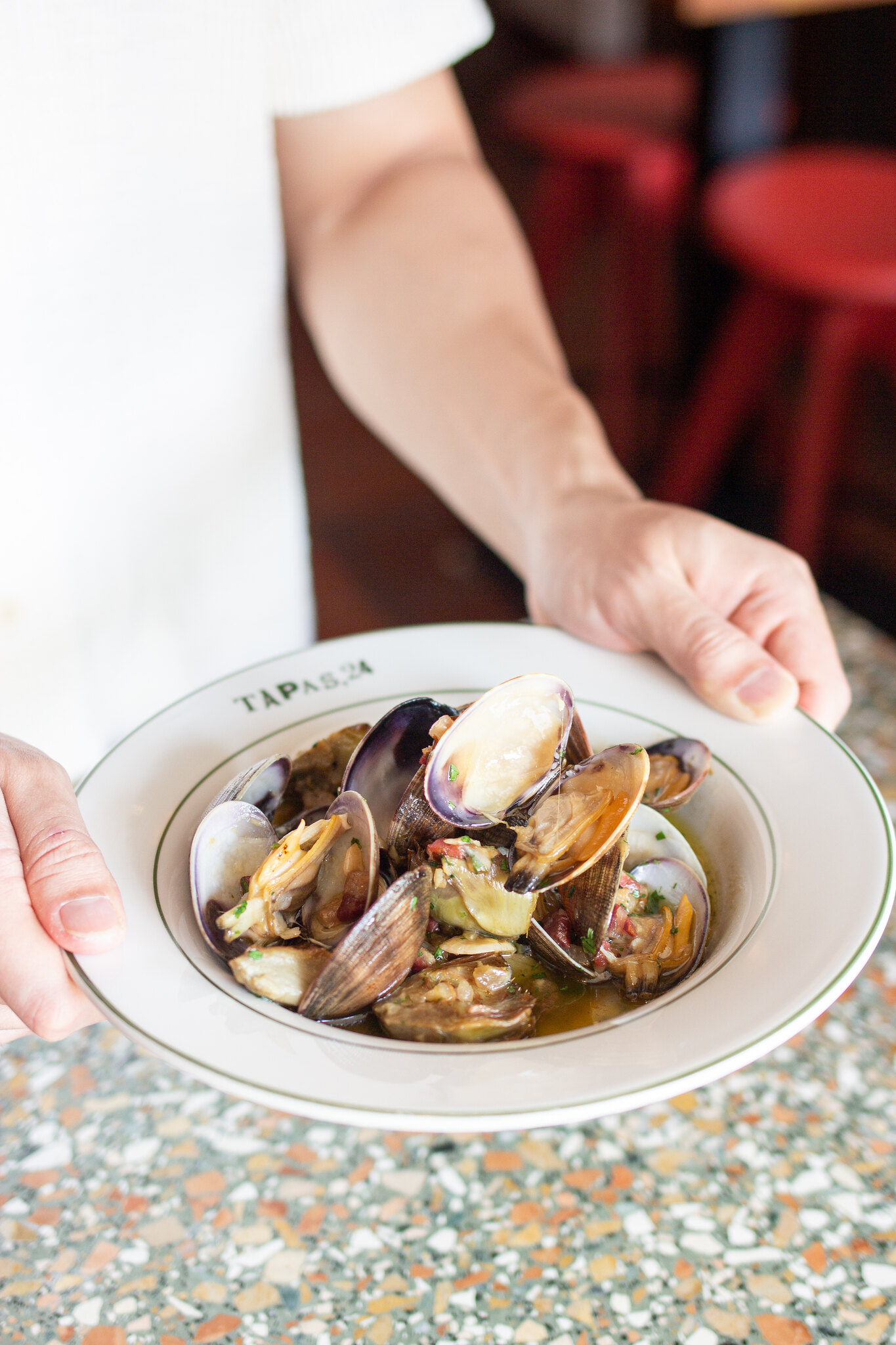 Yet another dish I enjoyed was the Clams “Ajillo” in Sherry ($32) – fresh clams flambeed in sherry wine with garlic, fresh artichoke and iberico ham. Though my partner thought that the clams would go better with white wine than sherry. 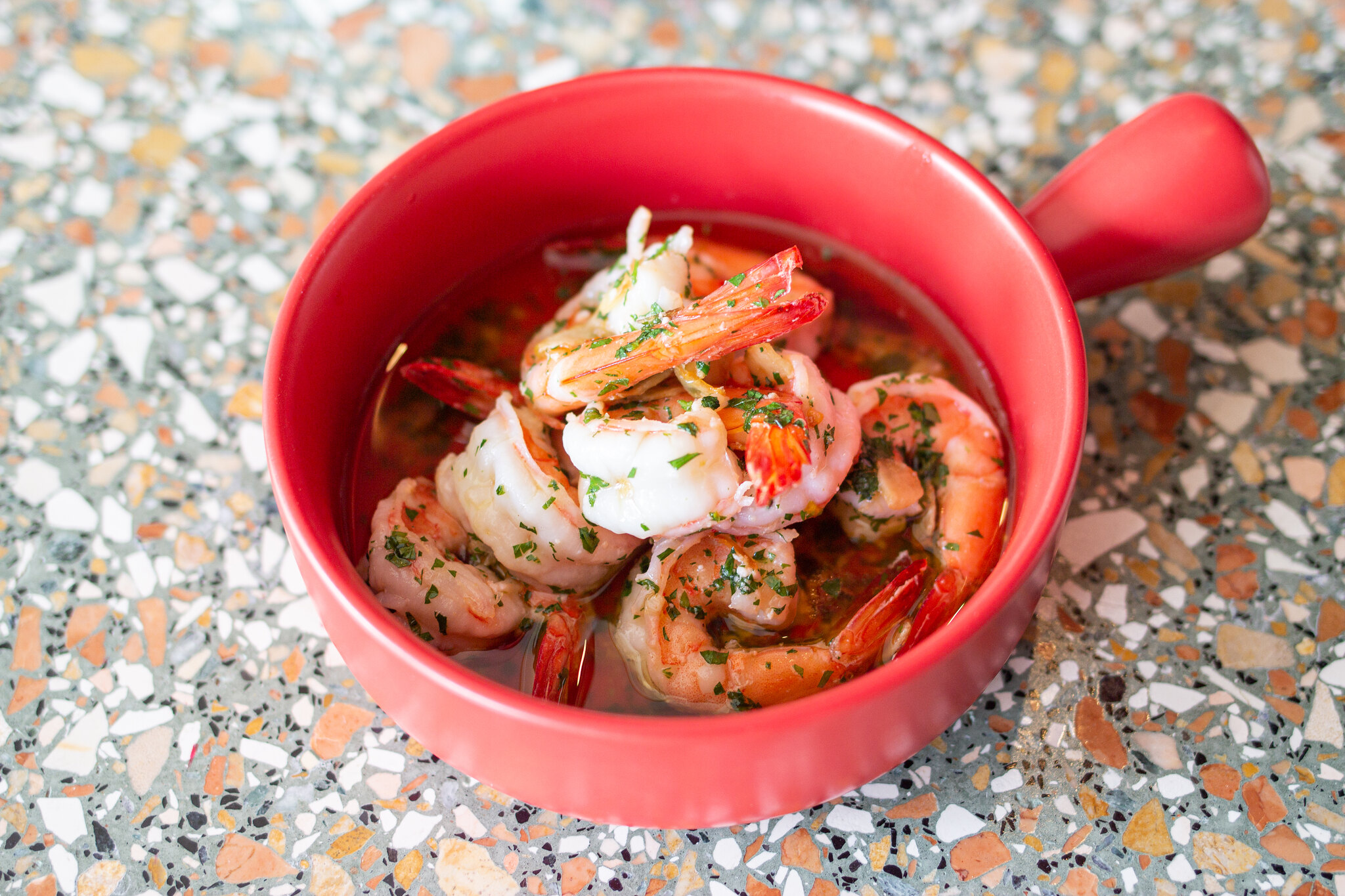 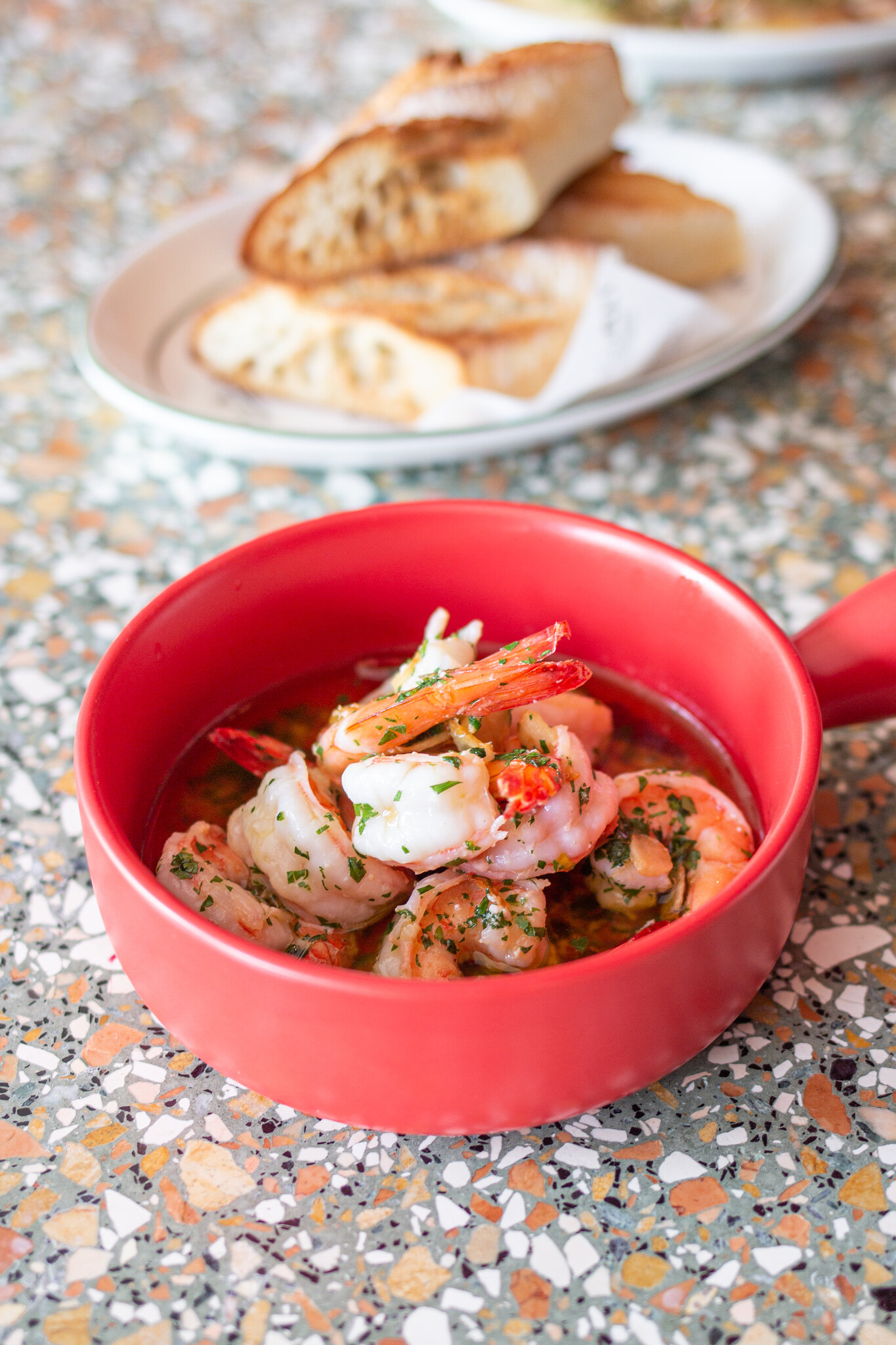 Probably our favorite dish we had was the Gambas Al Ajillo ($18) featuring plump, juicy garlic prawns in olive oil. Order some bread and dip it in the sauce for that extra carb satisfaction. 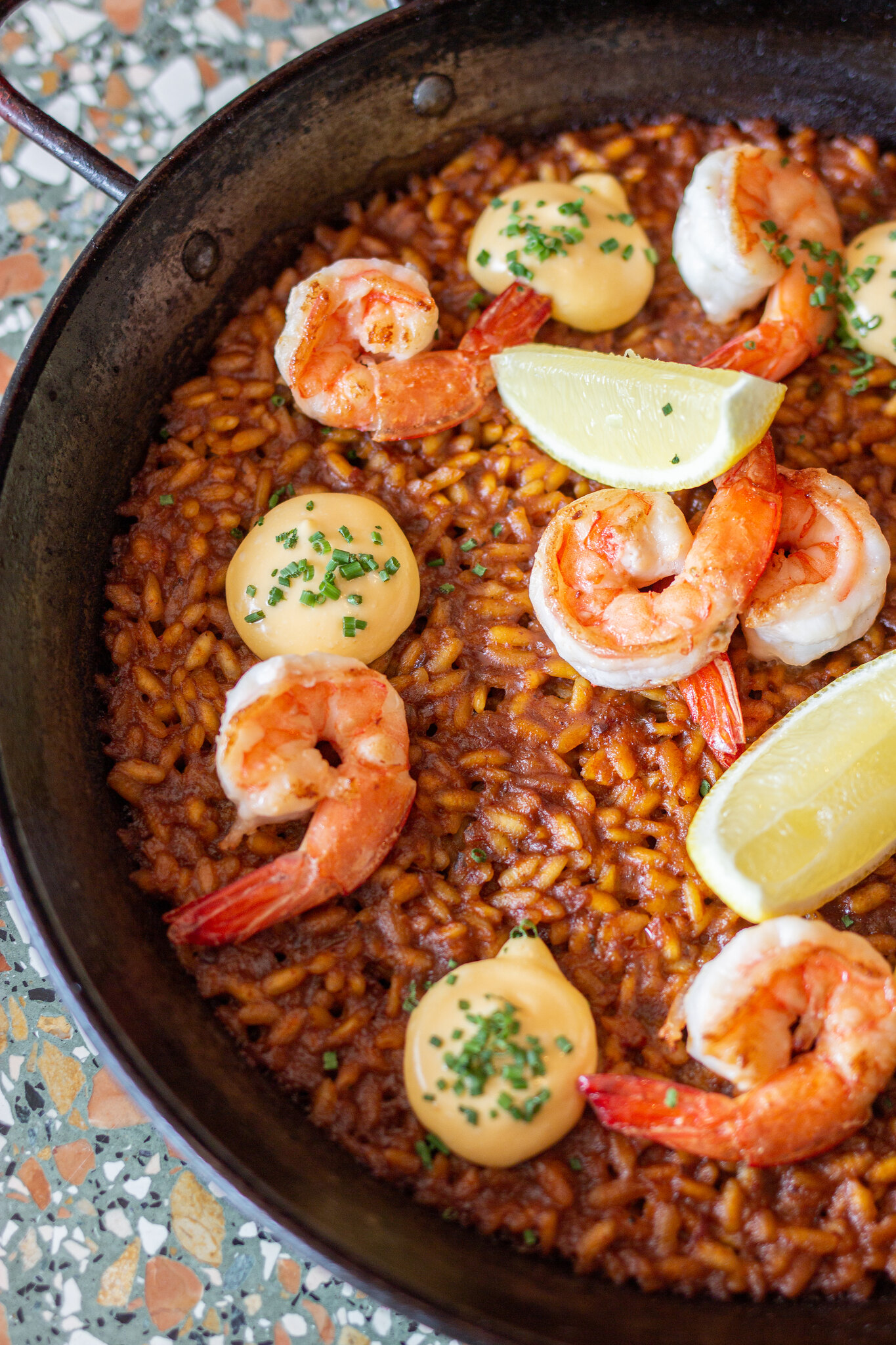 As though we did not have enough of gambas and carbs, we proceeded to try the Paella De Gambas Al Ajillo ($40), which came with prawns and paella rice cooked with seafood stock in the Josper oven. Disappointingly, the paella did not match my expectations – I’ve had better ones in other Spanish restaurants in Singapore. We didn’t manage to finish most of it. 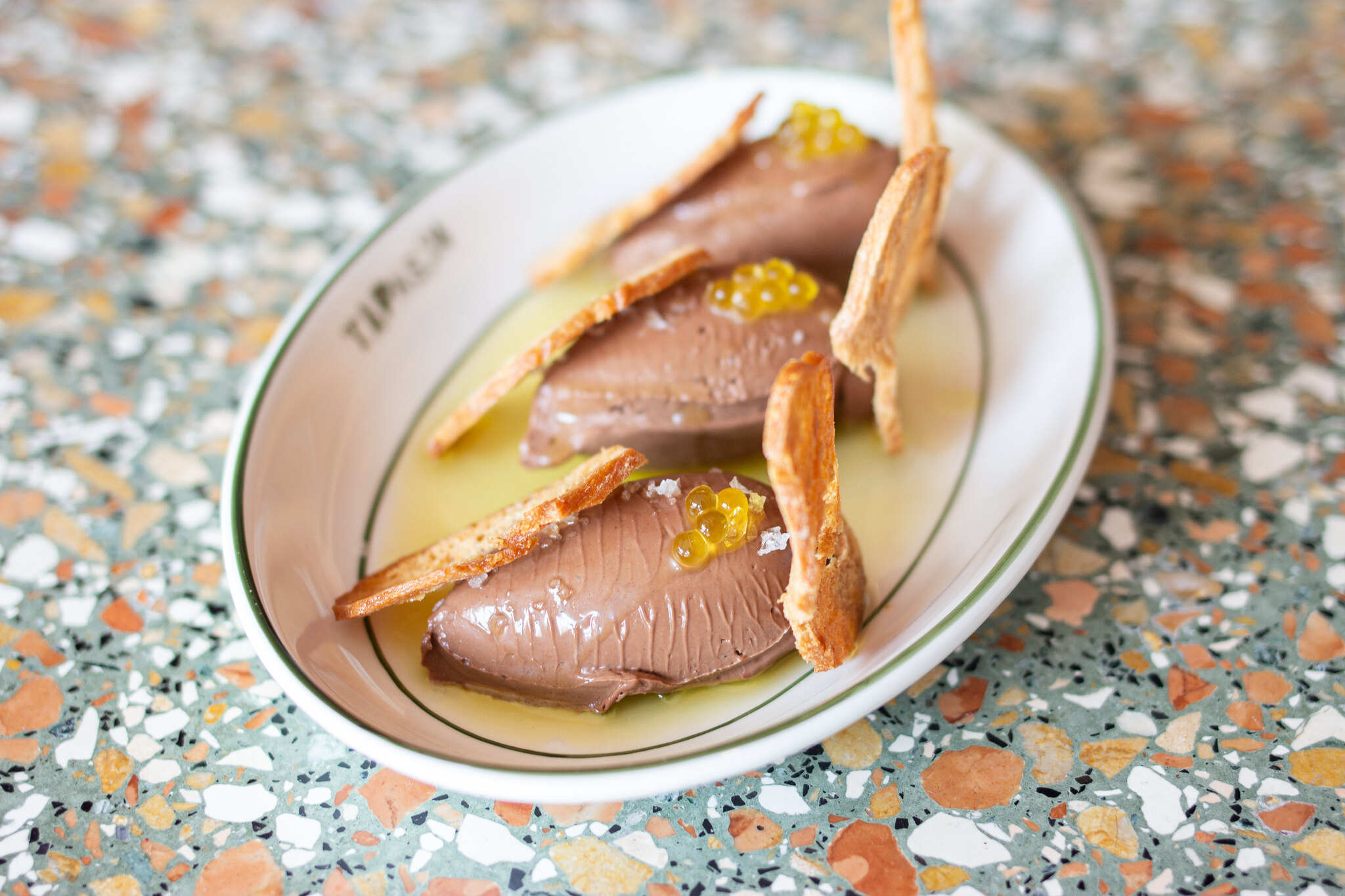 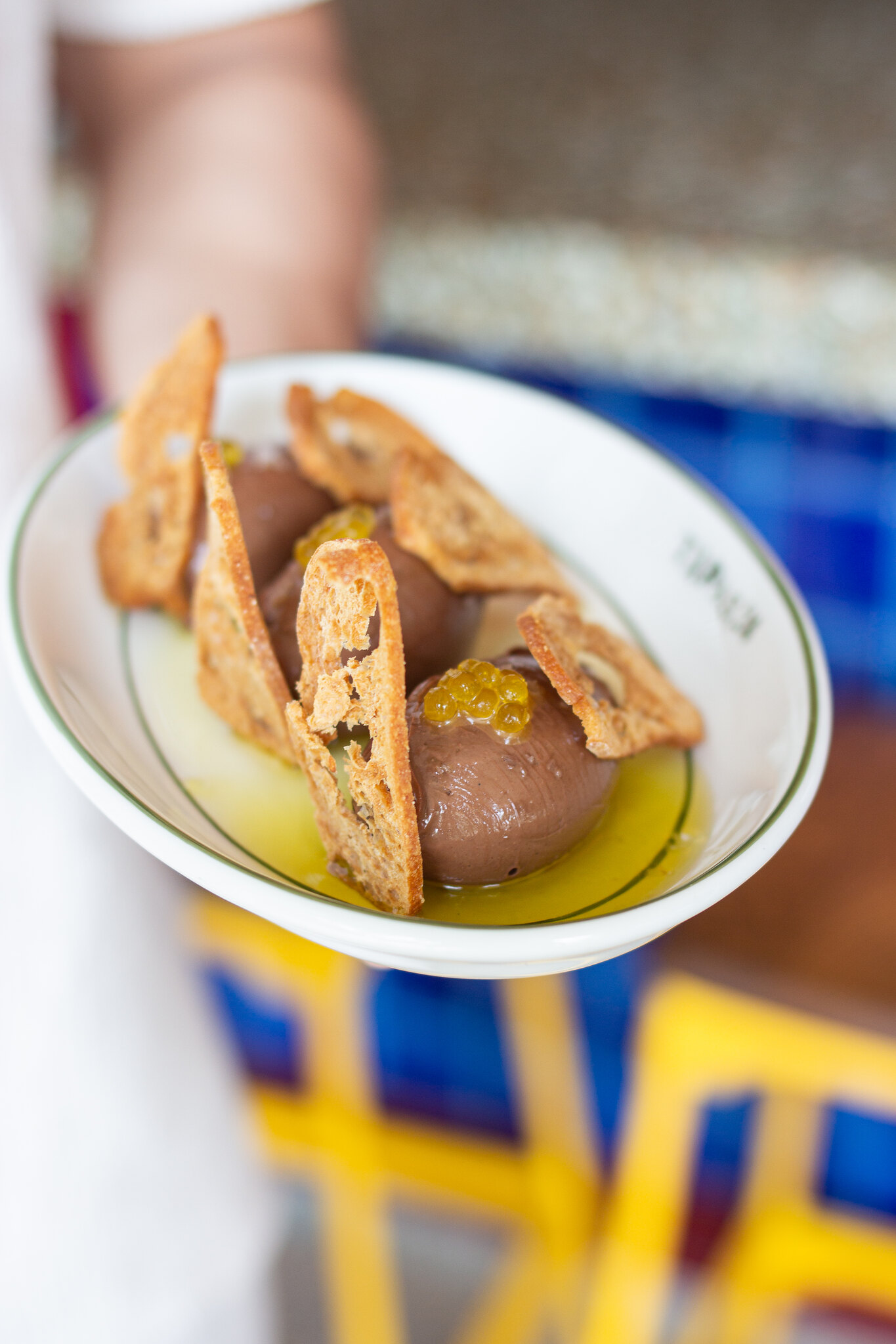 Thankfully, there is always a separate stomach for desserts. Between the Chocolate, Sea Salt and Olive Oil ($10) and the Brie Cheesecake ($18), we opted for the former as huge chocolate fans. The 3 dollops of rich and smooth dark chocolate ganache, topped with olive oil roe and sprinkled with sea salt, appealed to and was welcomed very much by our dessert stomachs.

Though the price point is slightly steep in comparison to the portion sizes, I must admit that most of the dishes we tried were comparable to those of a good Spanish restaurant in Singapore.

Thanks to the Tapas 24 team for the invite and hosting. 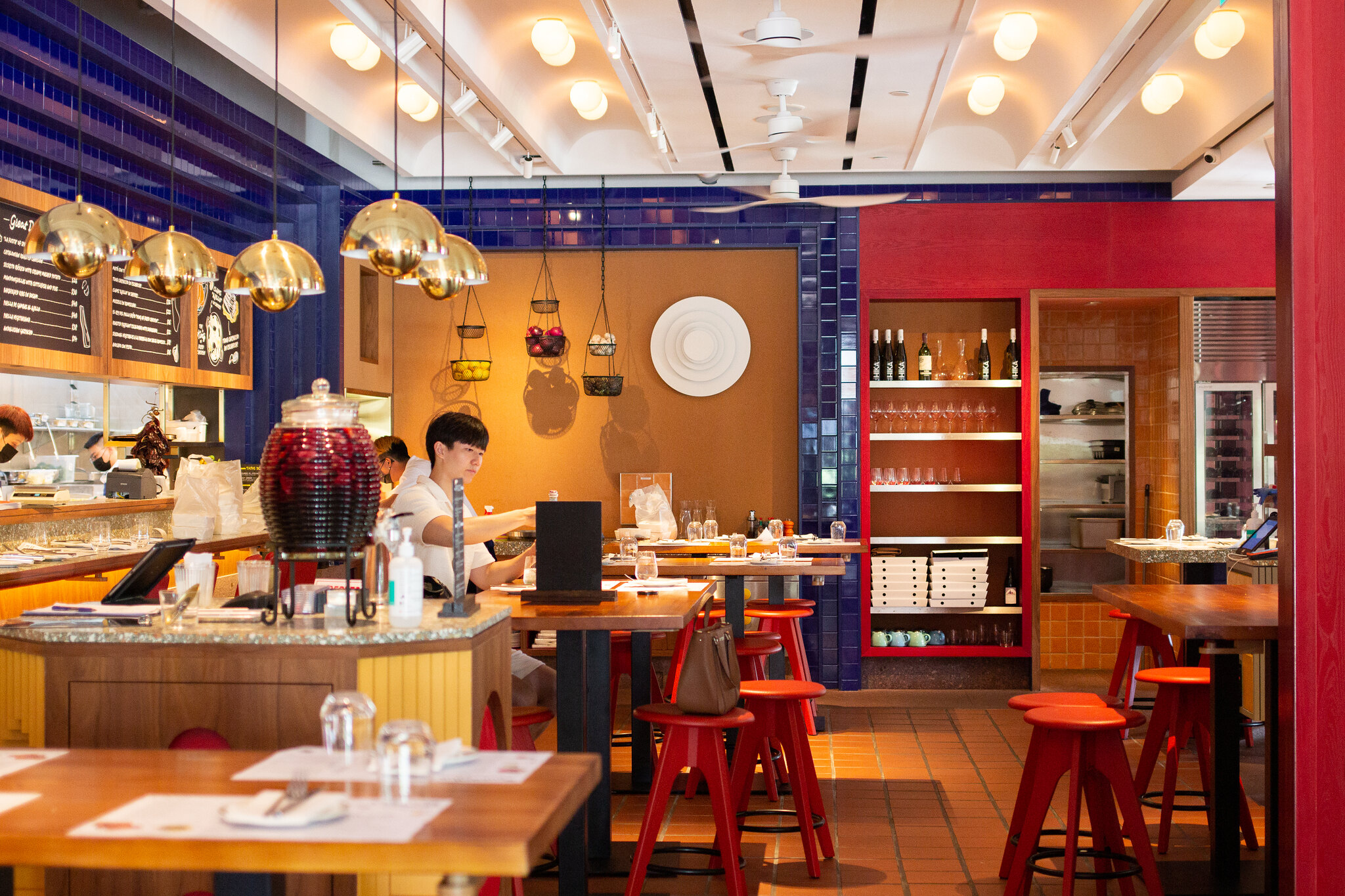