A short 26 hours in Daejeon, a city known for its research institutes and its being at the crossroads of transport lines running in South Korea. Getting around the city was just as fuss-free as getting to it by a 1-hour ride on the KTX. The sole subway line takes you to most places you will need to go, and you can count on buses to get to less accessible neighborhoods (though frequencies of buses vary).

On top of visiting the usual tourist spots (Skyroad, Daedong Sky Park, Expo Park & Bridge, Yuseong Foot Spa and Sungsimdang Bakery), I squeezed in time for just 2 cafes that were on my list. 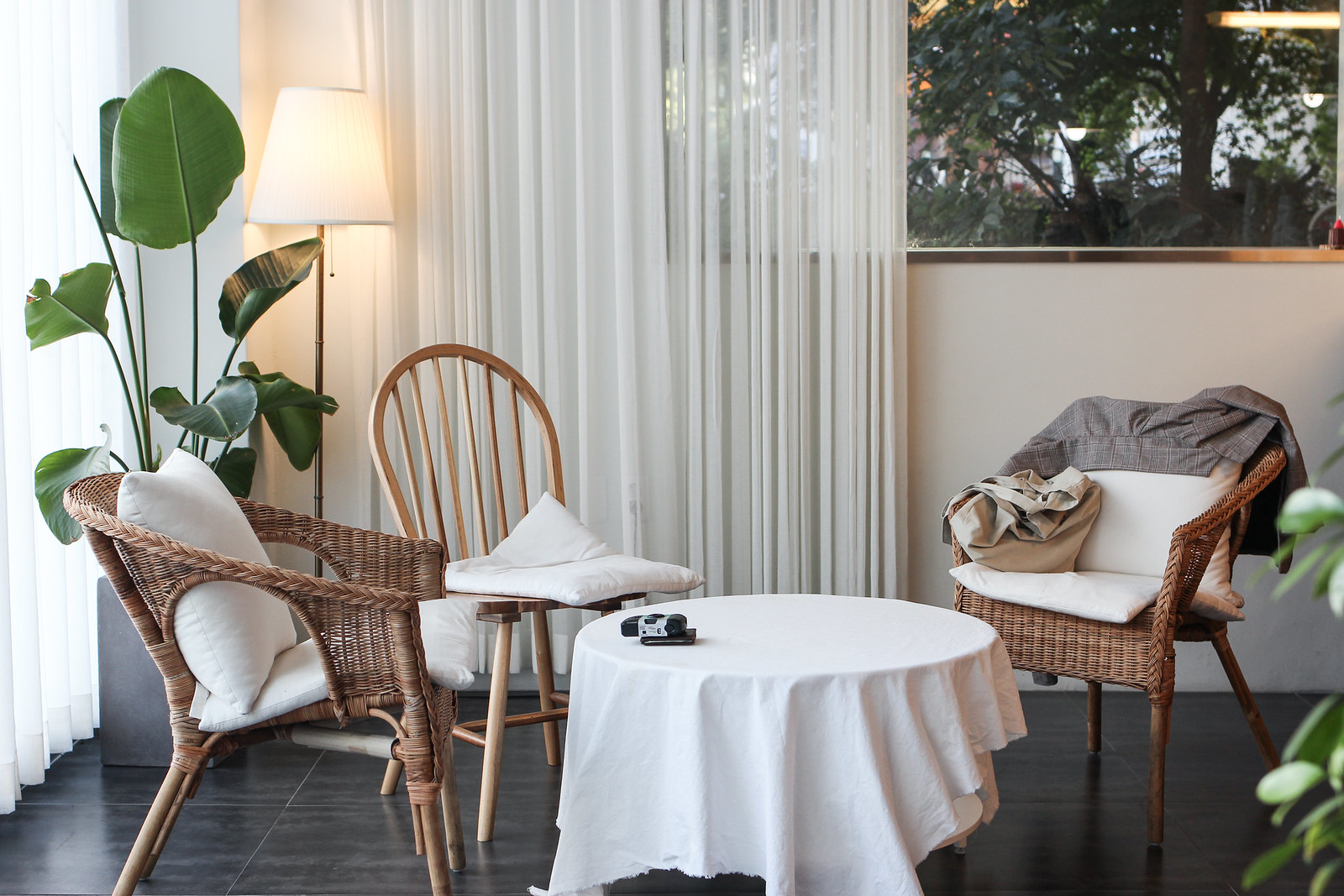 Just a short walk away from KAIST and Chungnam University is Café Halfrest, which is also accessible from Yuseong Spa subway station by a 15min walk. Note that the café is not visible from the main road – you’ll have to turn into a small alley to get you to the other side. 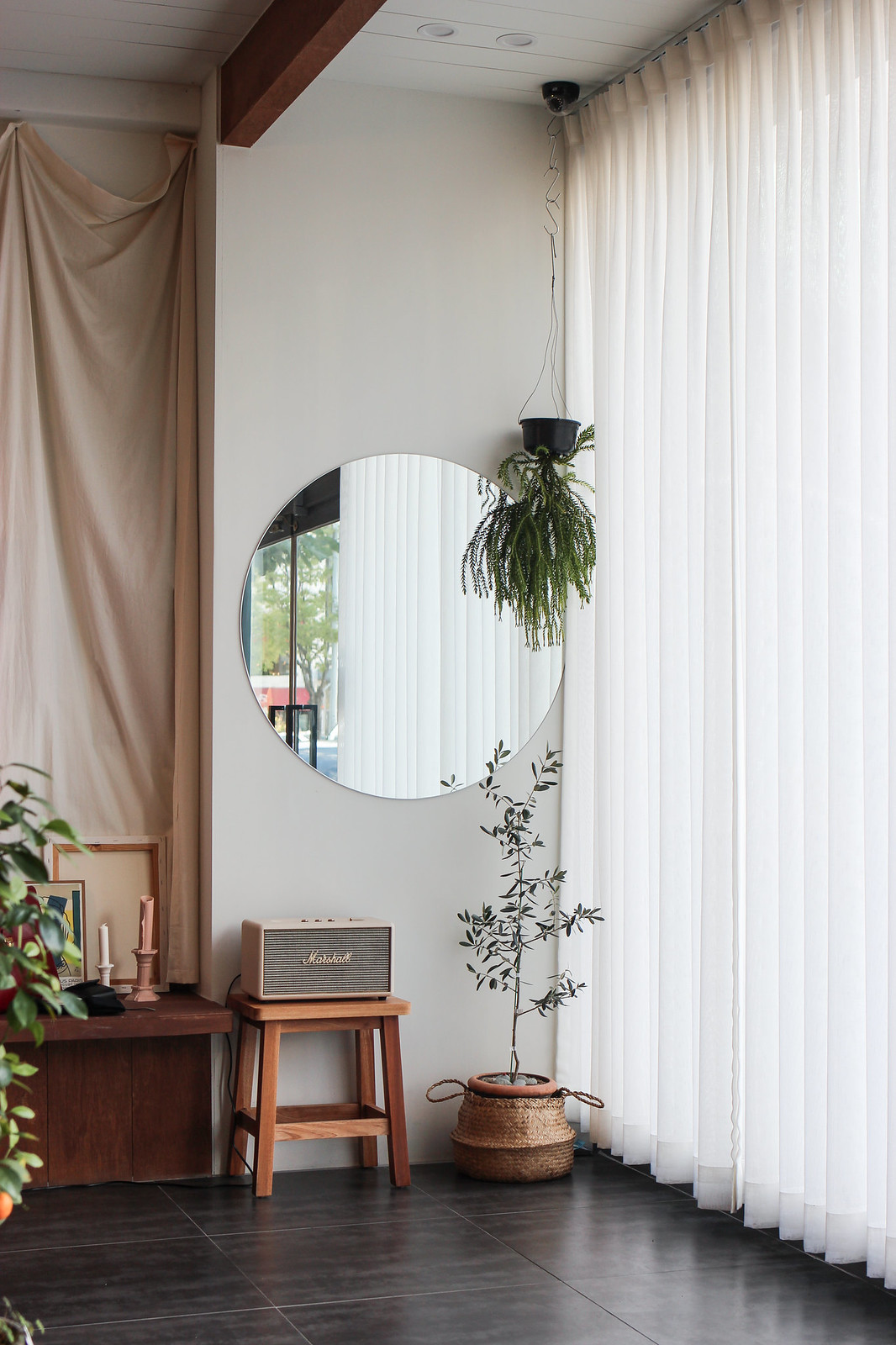 The atmosphere in the café was very much soothing, and I believe the part-Scandinavian interior played a huge role in that. We managed to grab the best seat in the house – a round table lined with white linen tablecloth, flanked by rattan and wooden chairs with white seat cushions. 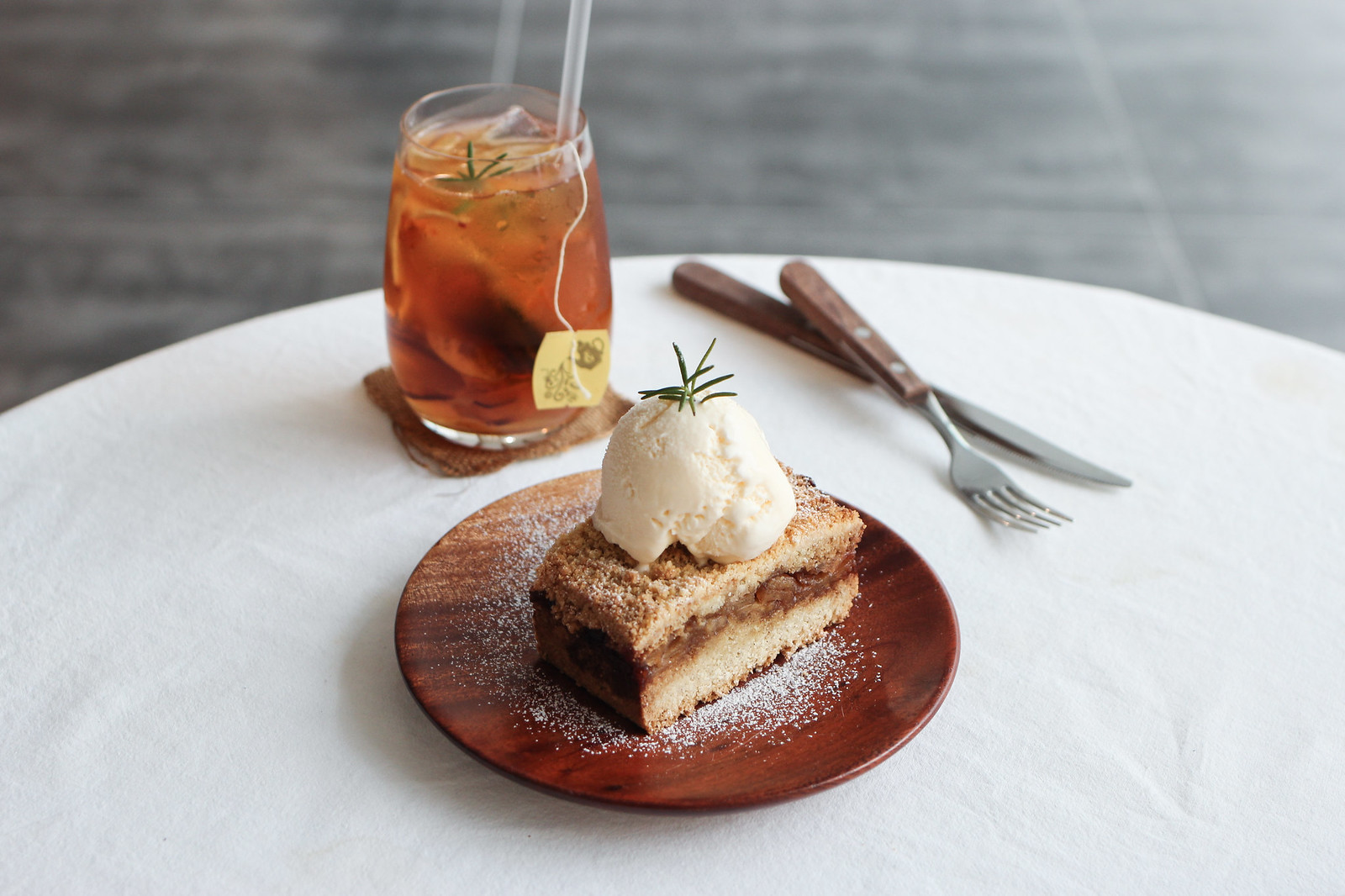 Coffee here was decent, but compared to the Café Latte (4000KRW) we had, the Apple Earl Grey Tea (5500KRW) was more memorable for me, thanks to its sweet and refreshing taste. 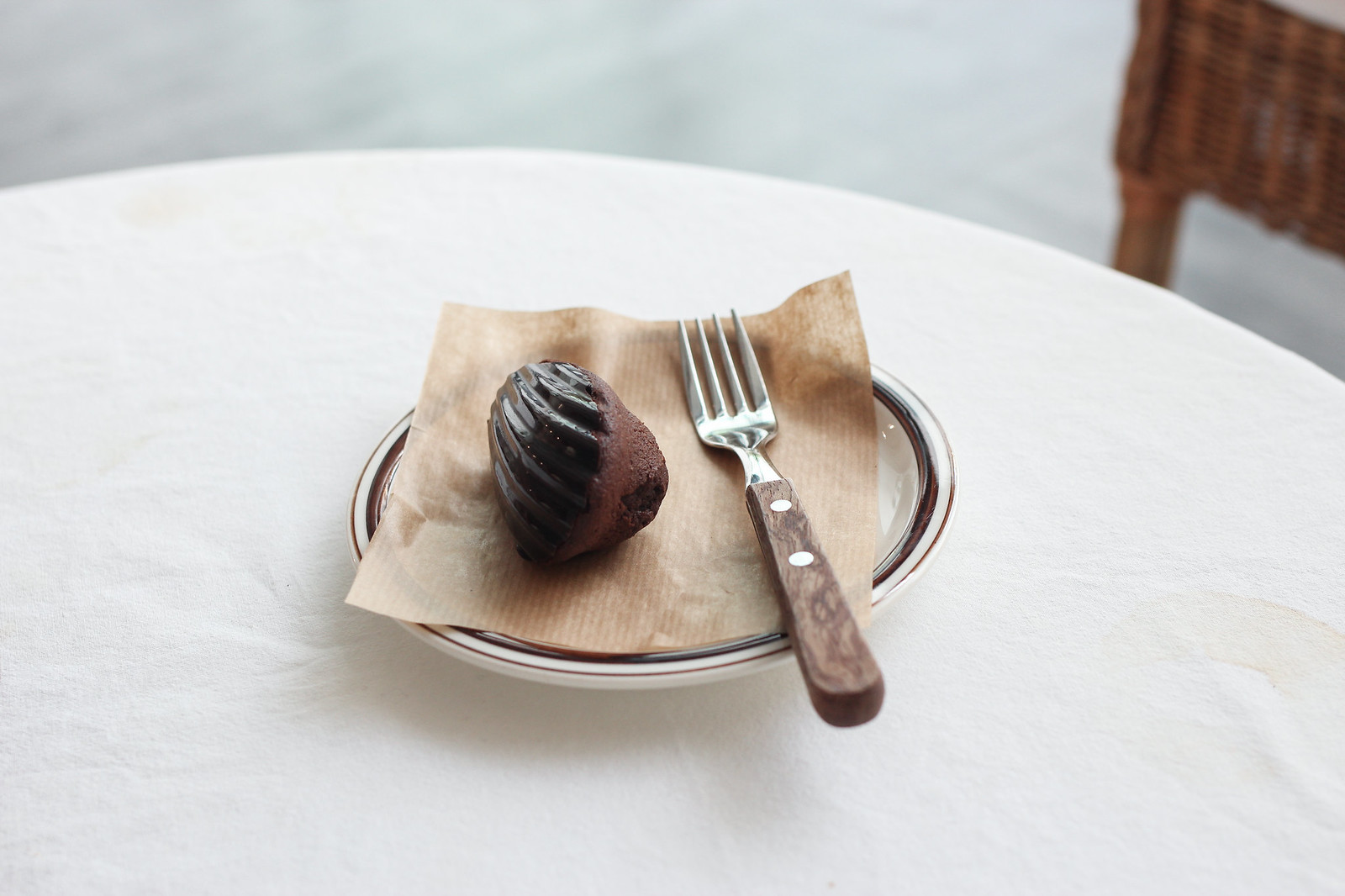 We also chose the Madeleine (2500KRW) and Apple Crumble (5500KRW) from the small selection of pastries available. Both were good, especially the apple crumble despite it not being heated up. 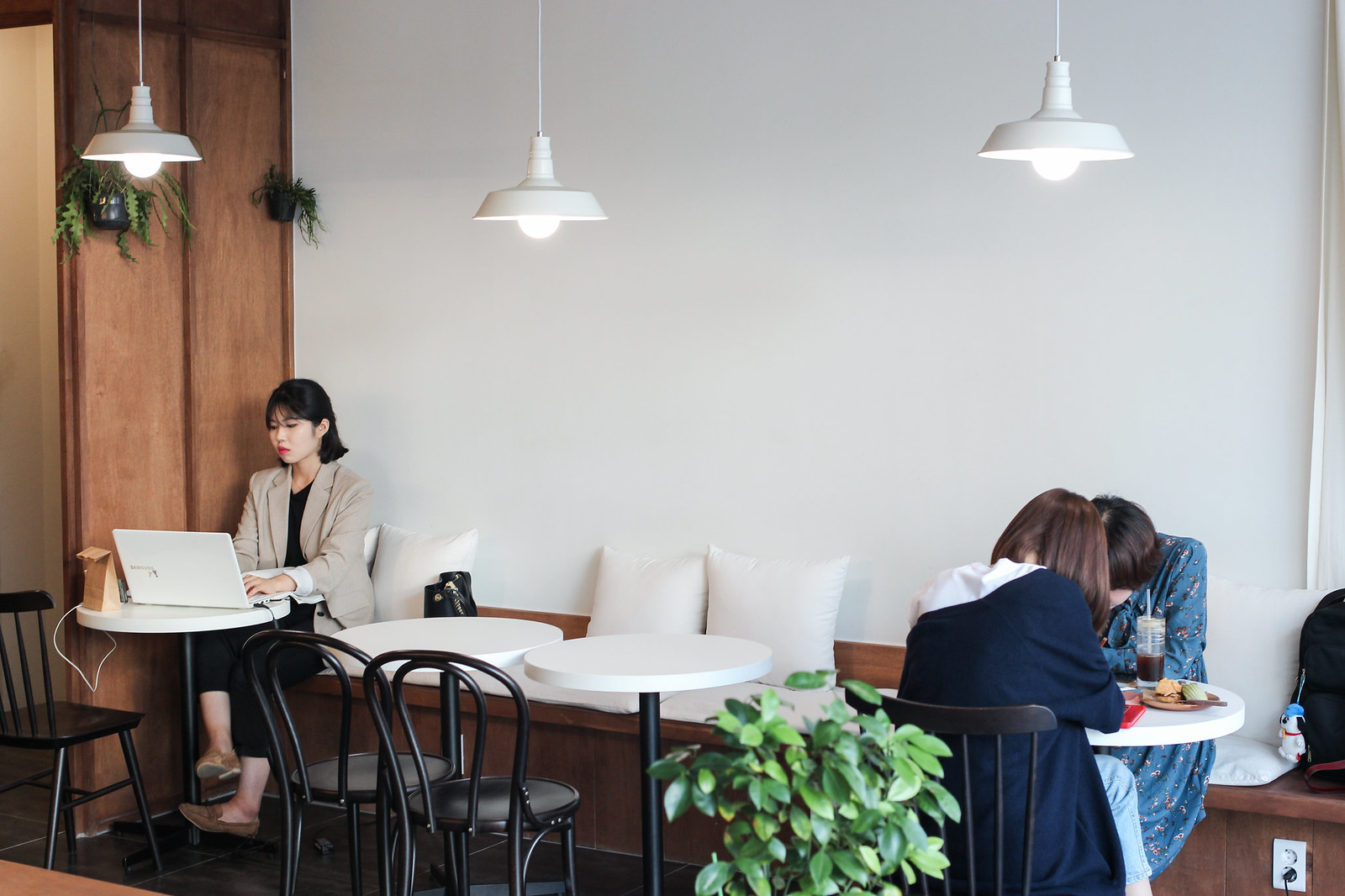 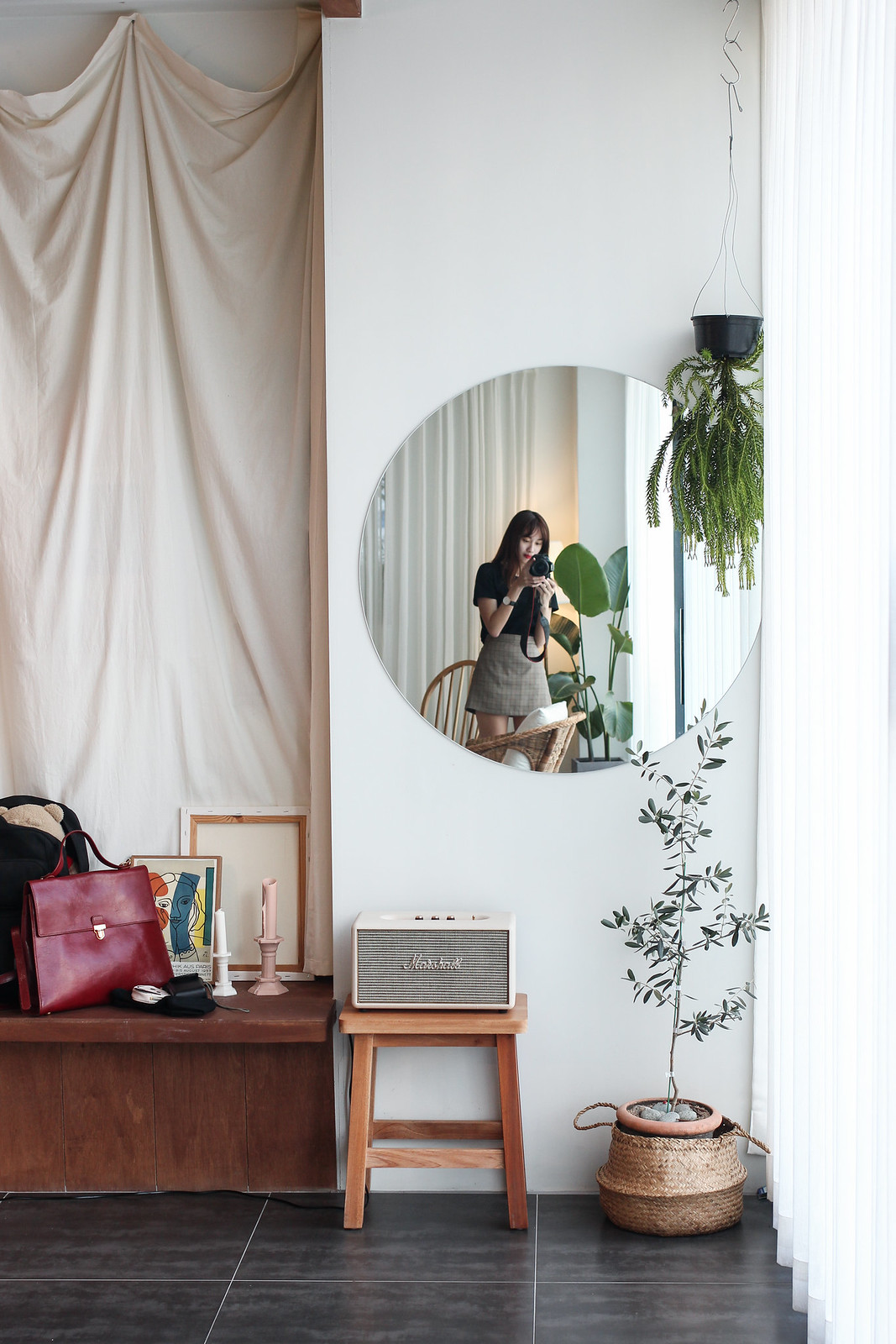 After our tea break, we walked down the main road to Yuseong Foot Spa, a natural hotspring for your feet that is open free of charge to the public. Amidst receiving looks of wonder from the all-native crowd at the hot spring, I rested and recharged my feet in the relaxing outdoors of this small city. 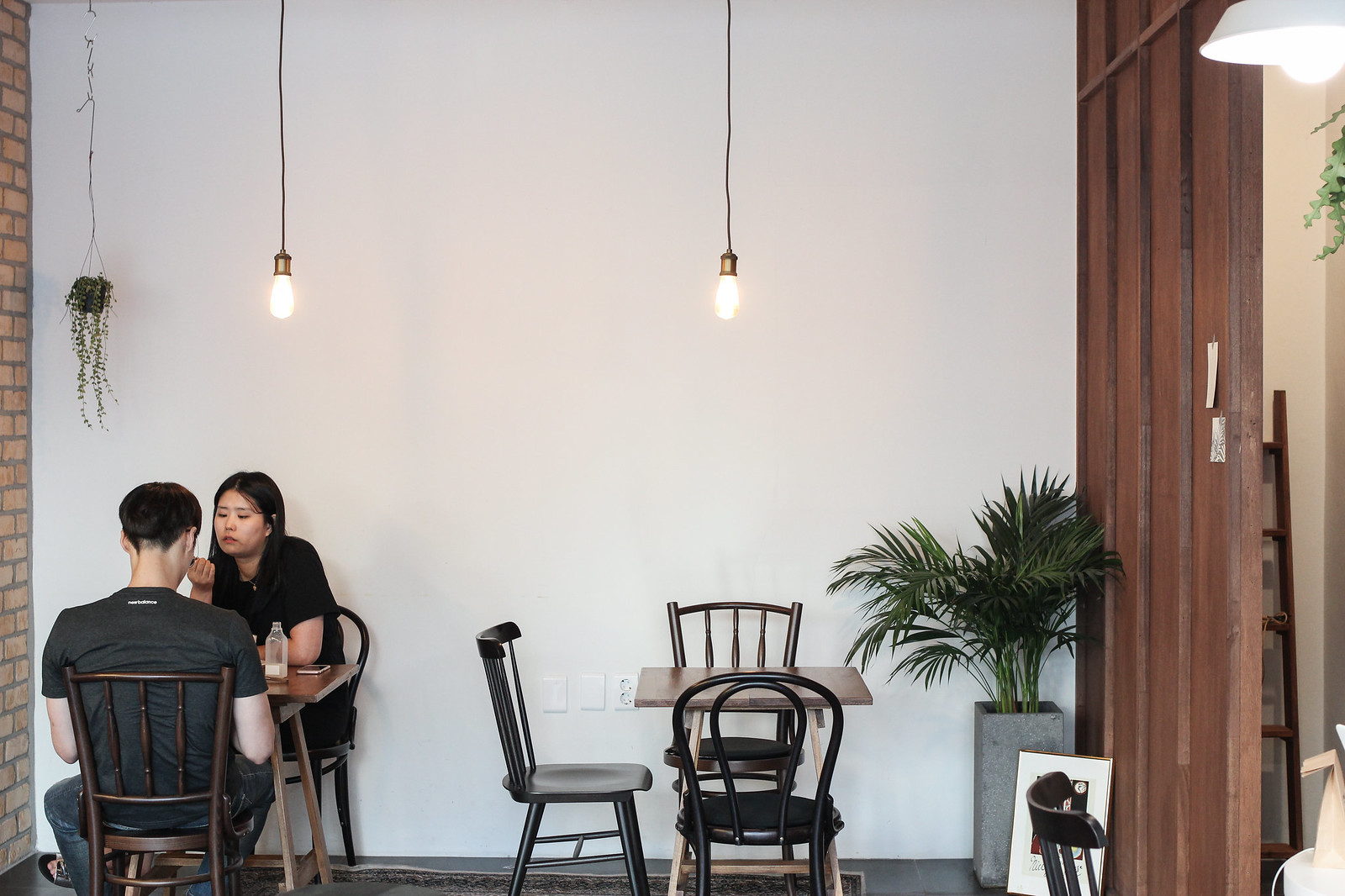 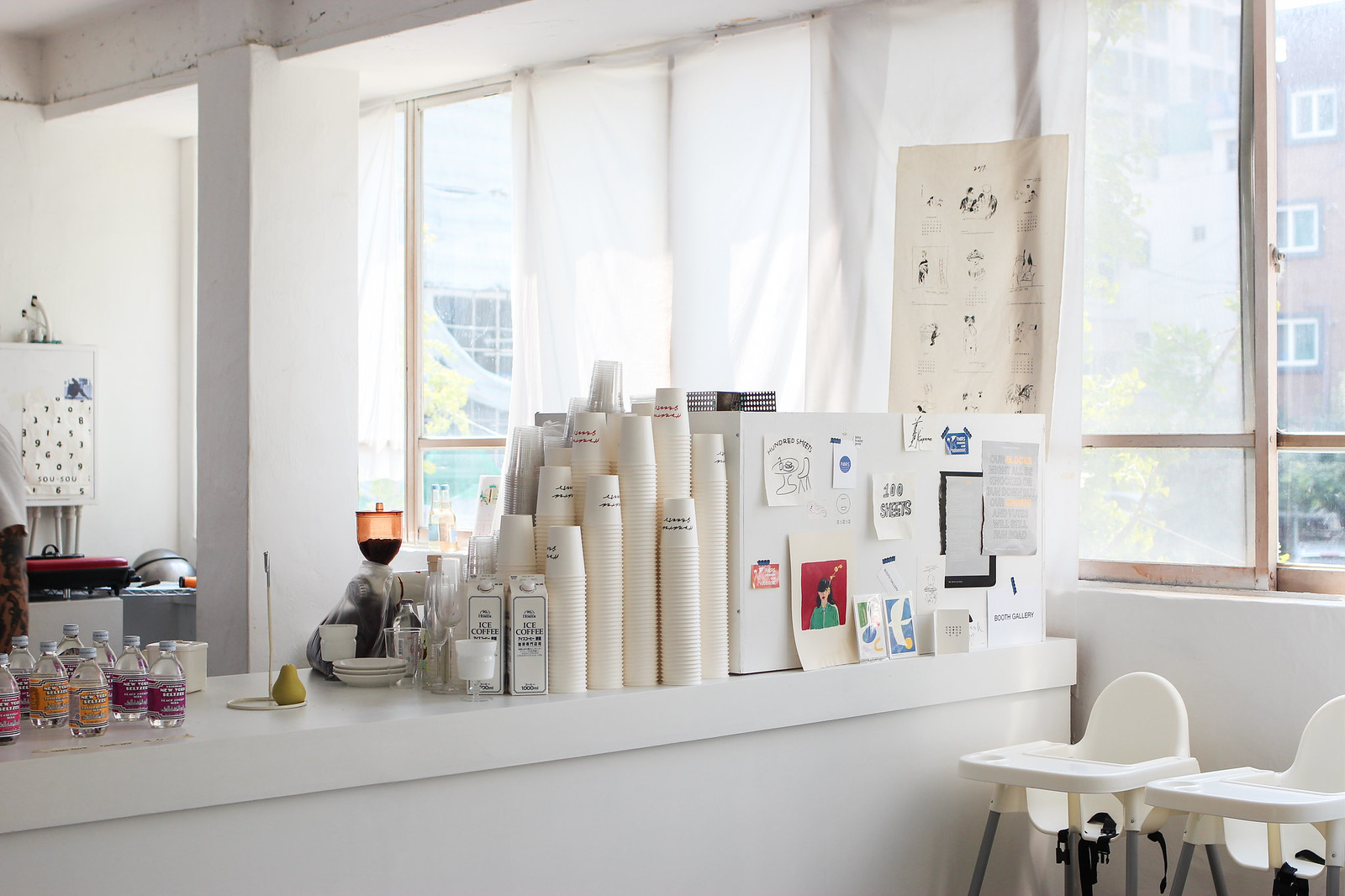 I first discovered this café on Instagram and told my friend that we just have to visit – you can see why from the interior itself. 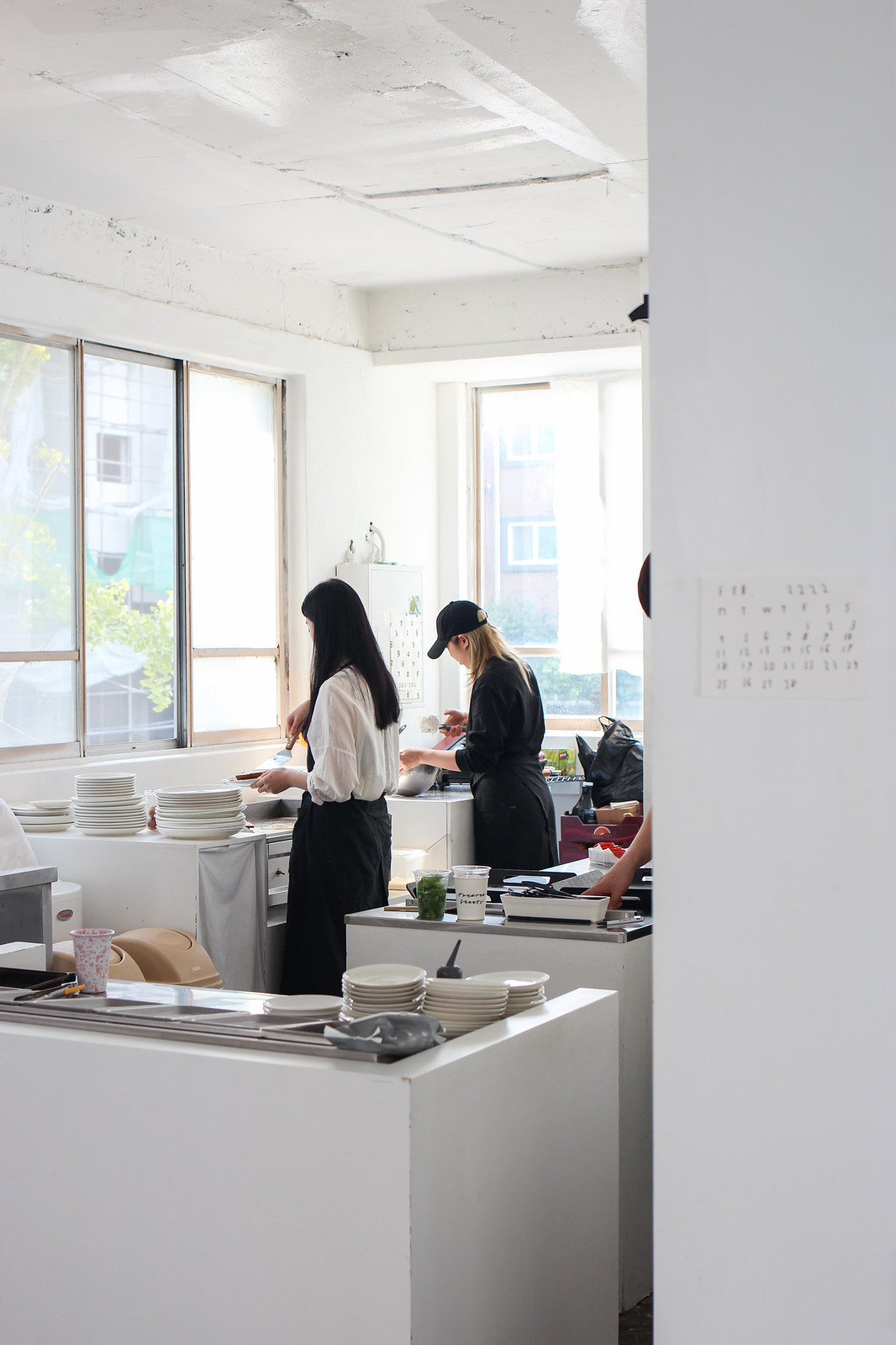 After a flight of stairs to the second floor, I came face to face with the vast expanse of café space. Except for the concrete floor, every corner was white-washed, and together with the windows letting in a good amount of sunlight, it felt like heaven to me. 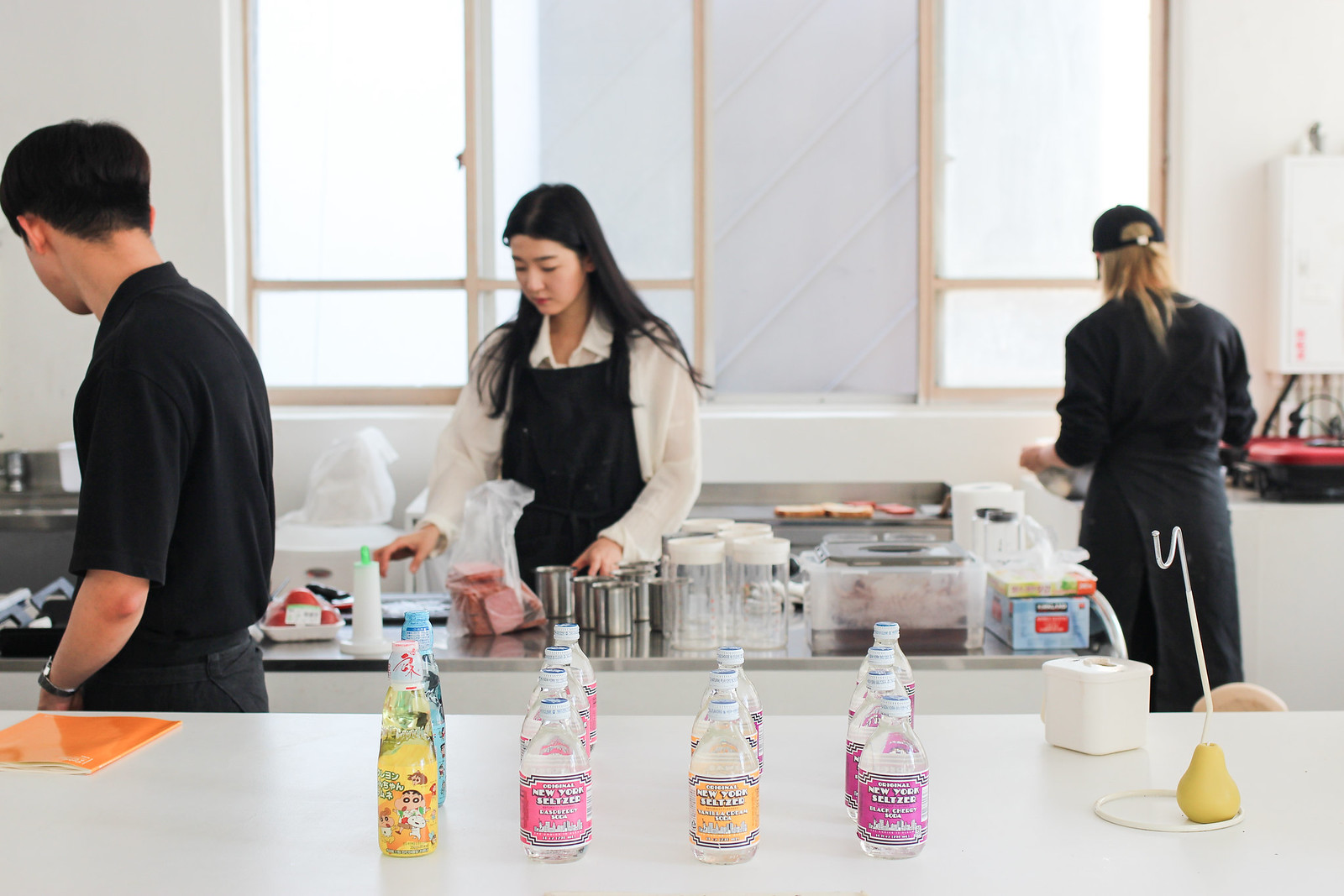 Being the first customer of the day, I basked in a good 10-15mins of photo-taking time before the café became slowly filled, and before I finally decided on my order. 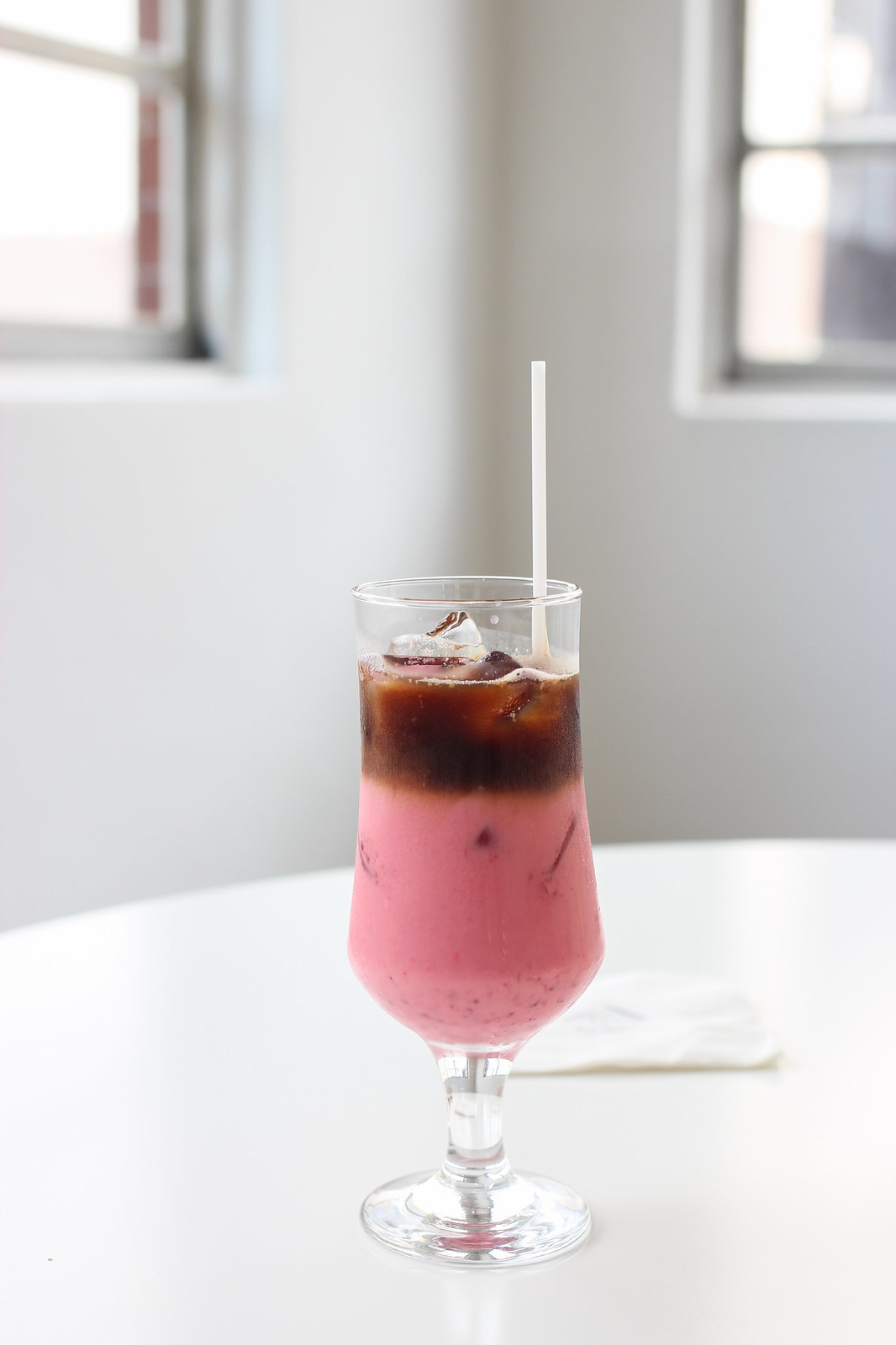 Feeling slightly adventurous, we ordered the Strawberry Latte (5,500KRW), not knowing how it would look like, and the more ordinary Lime and Lemon Soda (5,500KRW). The strawberry latte turned out having a higher ratio of pink than expected, and a more artificial shade of pink than what I had imagined. Perhaps a regular cup of white coffee would’ve been better. 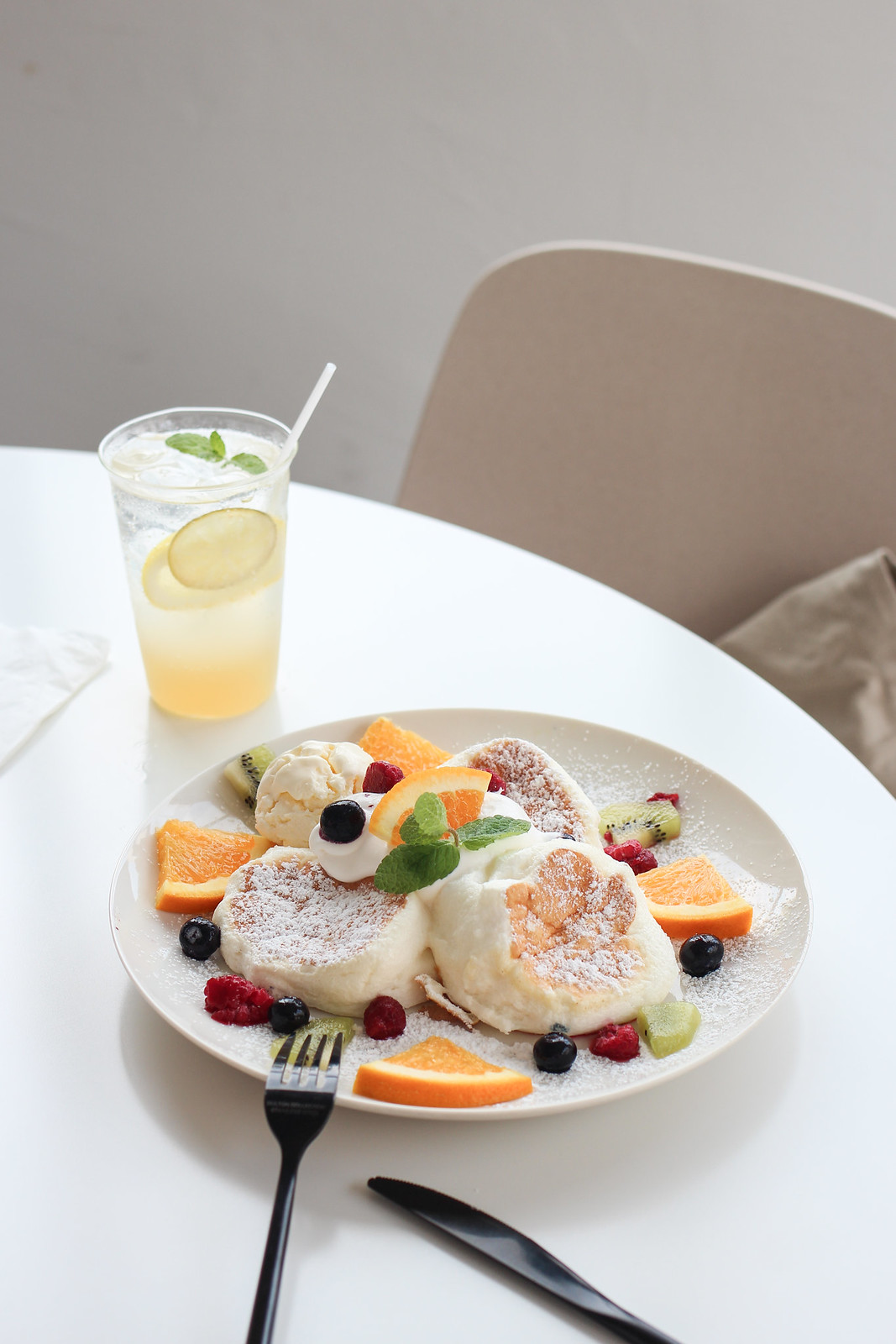 Since they brand themselves as a “pancake club”, we just had to try the pancakes here for ourselves. We opted for the Fresh Fruit Pancake (13,000KRW) that came topped with seasonal fruits and ice cream. From its aesthetically pleasing visuals, I was expecting a fluffy texture but unfortunately it tasted too moist and eggy. Sigh. 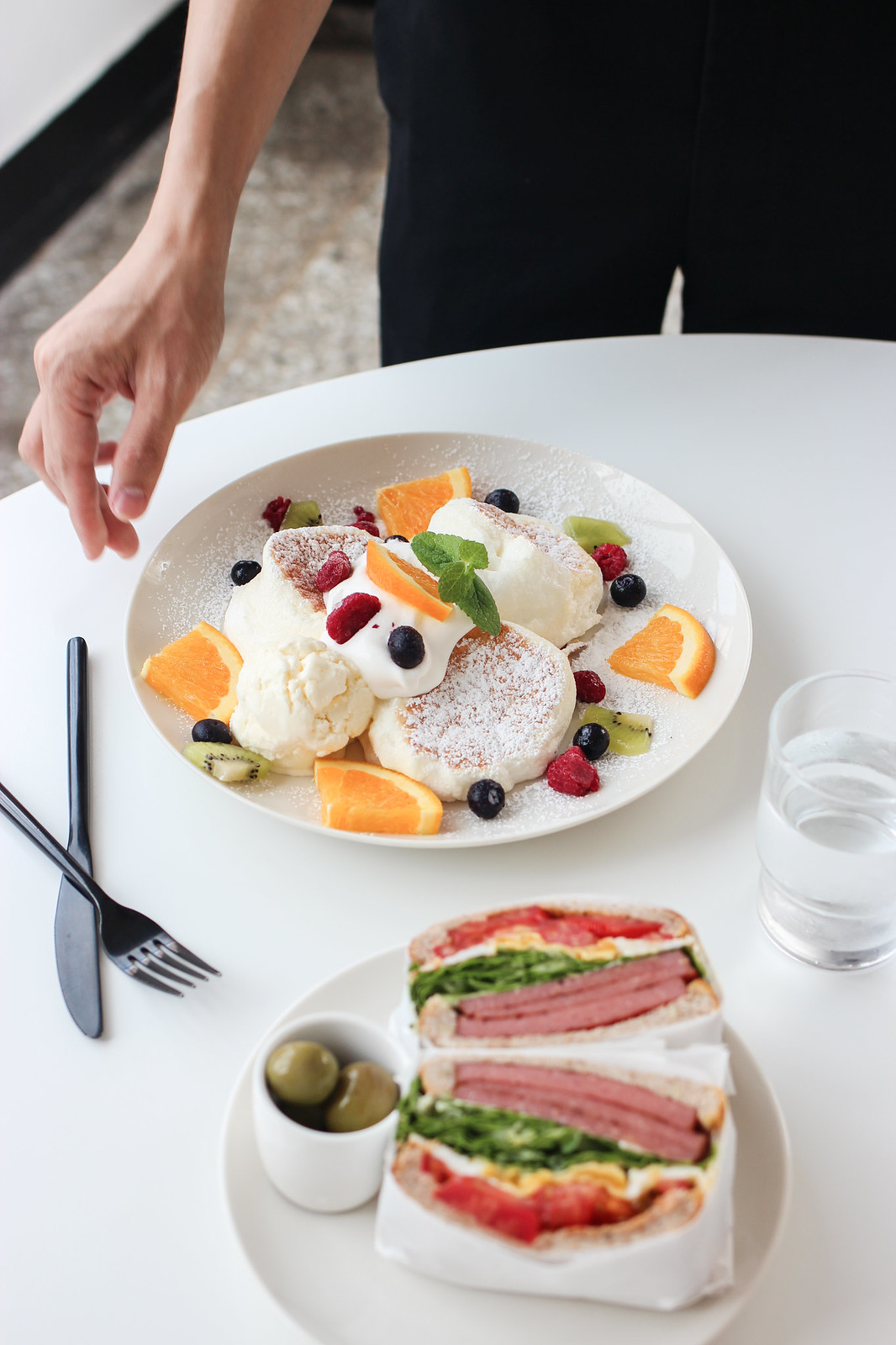 I also got a sandwich which came stuffed with a generous amount of spam and vegetables but felt like it was something I could easily make at home. 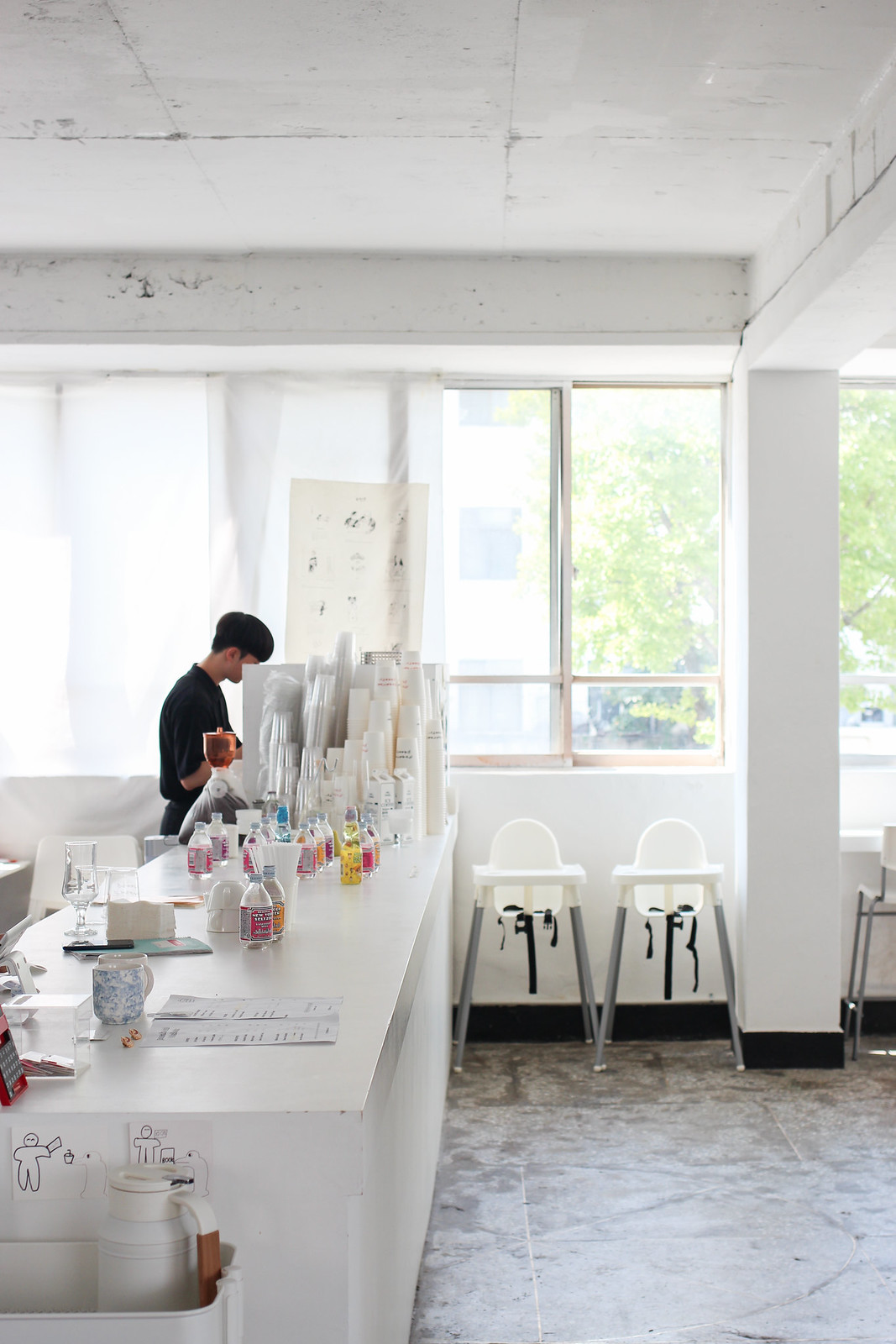 Not gonna lie, I left feeling disappointed with the food. Well, at least the photos turned out good, and I was on a relaxing weekend trip.